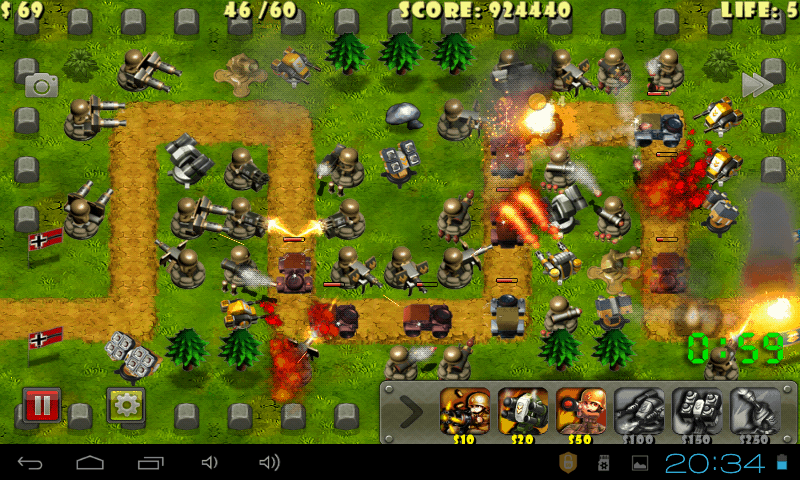 I downloaded this inconspicuous defense game at the wrong time of night, and the next thing I knew I had only a few hours left to sleep before I had to get up. A brilliantly simple, addictive, easy to pick up and extremely fun to play, Little Commander is a perfect tin soldier time-killer. 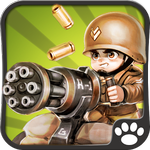 Little Commander is not the kind of game that catches your eye as you browse the hips of Android games on Google Play. It is a tower defense, and a strategy that seems like dozens of other games in the niche. Besides, it was not largely advertised when it launched. Yet, there was something about it that made me download and give a try, and it turned out to be a very decent and fun game.

I am not a hardcore tower defense gamer – this genre ultimately bores me. However, Little Commander is fast, easy, challenging and rewarding at the same time, which creates a perfect blend of interesting and fast gameplay, colorful visuals and a feeling of ‘mission accomplished’ that makes you play for hours on end.

In fact, I downloaded Little Commander long past midnight to have something new for tomorrow, and it set me off 3 hours of healthy sleep in favor of the gameplay. It hits the sweet spot for average gamers – it is cute, easy to pick up and master, challenging and varied enough not to get bored, and addictive as hell. It basically sucks you in the vortex of massive cartoon war, where you have the chance to be a generalissimo or the Reichsmarschall and lead your little army to victory. 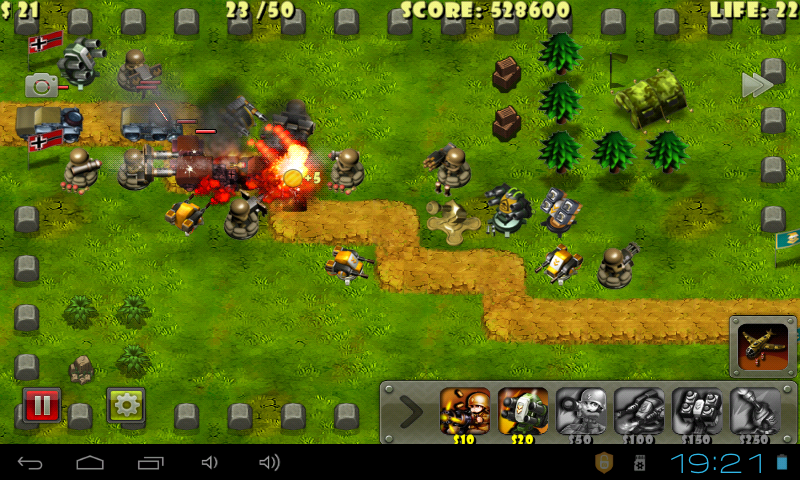 There is no need to read or tap through the tutorial – the game is dead simple. You are given a command over a very limited squad of infantry armed with quite simplistic automatic weapons. Your goal is to prevent the enemy force from crossing your zone, so you will place your soldiers along the track of the enemy advance.

Your soldiers start shooting as soon as the enemy enters their weapon’s radius of reach, and will keep shooting as long as the enemy remains within its limits. The ammo is upgradeable, and you will be able to level-up as soon as you generate enough coins.

You see the coin count in the upper left corner, and it increases based on the number of neutralized enemy units.

At first, the private infantry launches, and your squad eliminates them quite easily. More coins unlock your next battle unit – bazooka. Before long, you will unlock more complex weapon units and place them all along the enemy lines. Don’t forget the land-to-air missiles, and upgrade your units to Max capability, and at some point, you may even hit that fast-forward button and enjoy the show. The planes crash are particularly spectacular. 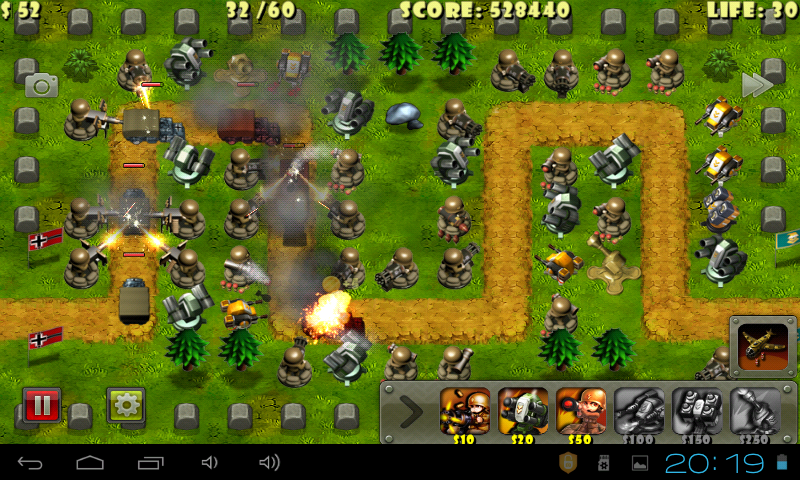 The game features real World War II ammo unlock-able as you play, from automatic weapons to bazookas, 155 mm cannons, B-29 bombers, Tiger tanks and even Zeppelin Airships. There are six upgradeable turrets, and a special bomber plane that carpet bombs your enemy whenever you feel desperate. No, not whenever, but it becomes available once in approximately 4 minutes, so you have to use that power-up wisely.

Little Commander features cute cartoon-ish graphics and sound effects in the same style. The dying infantry fall with ‘Ah-Oh!’ exclamations, while the shooting and advancing tanks and trucks sound quite realistic. Overall, the infantile style adds to the fun factor of the game. There is no blood as such, so even kids can play it, if you want to introduce some elements of ‘what the real world’ is like into their development. 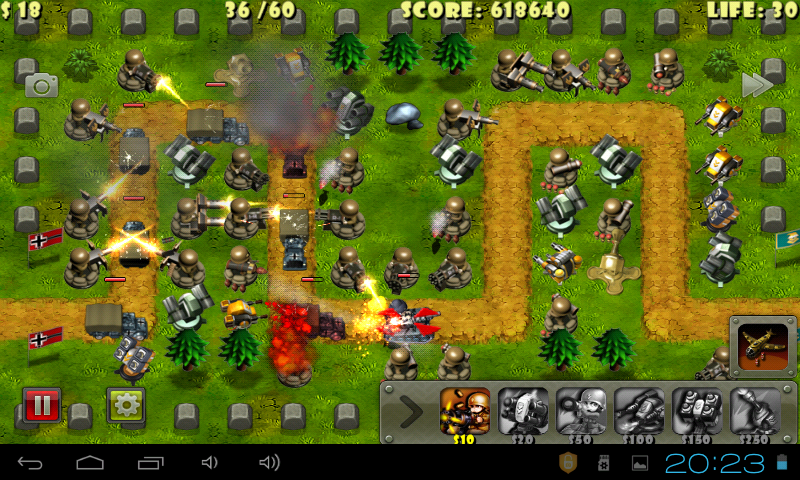 The Little Commander features a very simple, yet convenient and functional drag-and-drop control system, with additional pinch to zoom ability. The only complaint here is you can not re-locate the unit placement once it has been placed. You can not un-do the placement and get back the coin you spent on it, either. You do get some partial money-back when you simply sell the item, but remember to weigh in on unit placement before you drag it on the battle field.

You can tap on the enemy unit to have your units aim at it, or you can let your troops aim and fire at will – the effect is pretty much the same, except for the cases of air attack, when you’d better tap on the planes to help your missiles aim better. 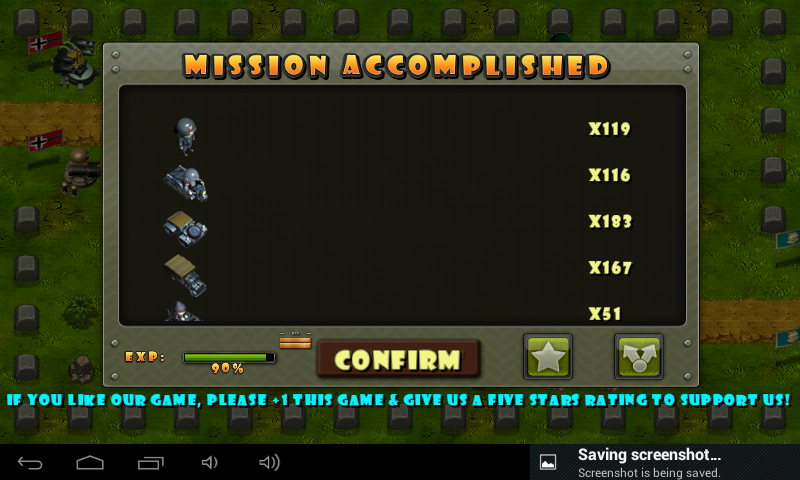 Little Commander brings nothing new to the tower defense genre, but it sure is enjoyable and addictive, especially for beginners, or if you simply don’t feel like playing a complex strategy game. The game features excellent cartoon-ish graphics for those who appreciate the style, and it’s a definitely worthwhile strategy and defense game for anyone looking for an addictive time-killer. You can play the casual levels for free, or unlock the other two difficulty modes – either way, Little Commander offers hours of thoroughly enjoyable gameplay. This is the case of ingenious simplicity, which obviously has a lot of work invested in it, and we can recommend it for all gamers, young and old.

Even if you a connoisseur of the TD genre, Little Commander offers a fresh approach, which is brilliantly fun and atmospheric, unlike most tower defense games. It is pure fun; get it.