If you ever read the Little Prince, you will love the Little Galaxy because it just has that Saint-Exupéry aura to it. A beautiful adventure, the Little Galaxy is a simple one-tap endless jumper mixed with a physics game and wrapped in a dazzling design with enchanting music as an extra icing on the cake. The Little Galaxy appeals to mature players and young kids, and the best part the developer Bitmap Galaxy made it free-to-play on Google Play store, so we definitely suggest you grab it.

The protagonist is a boy who could be aged anywhere between 7 to 14, dressed up in a spacesuit, but wearing no helmet. He’s got cool boots, though. He lives on a beautiful small planet with a huge golden, glowing tree and a sad dog. The boy is said to be a young scientist, but he is just a young, reckless adventurer anxious to start exploring the wilds. 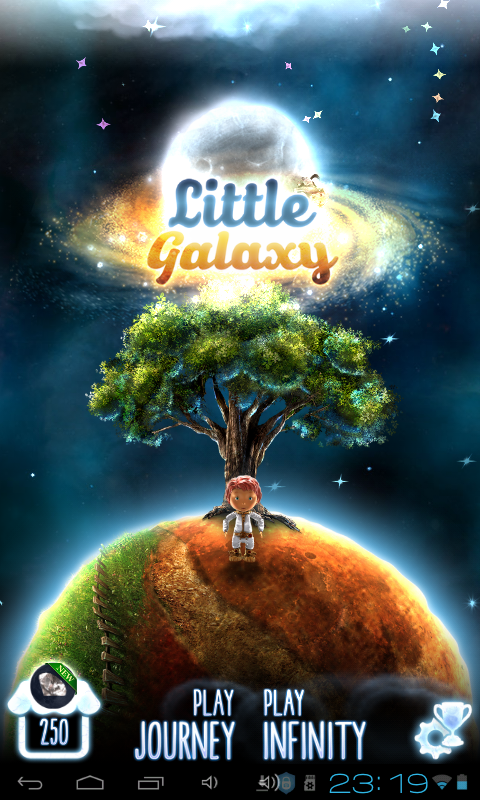 If there is one thing that I am missing here, it is the story. Like, where is he going and why? Who is that girl next to him on one of the screenshots? Will he ever make it back home where he left the sad dog? What happens to him when he drifts off a planet gravitational force? Does he die? It’s a bit scary because he does scream desperately when you send him off to space… Had the developers added a storyline, just a bit of it, it would have been intensely addictive. Without it, however, it’s just a gorgeous-looking, occasional time killer, challenging, but repetitive.

There is the boy and the rotating planets, suns, black holes, comets and diamonds rotating around planets. There are other boosters, but the premise is quite simple – you have to time your tap to have the boy jump from one planet to another, and since the planets are rotating, you have to carefully choose the right moment and launch the boy according to the optimum trajectory, which will bring him close to the next planet’s gravitational field. Miss an inch, and the boy drifts off, screaming, into the void. Quite blood-chilling experience, I should say, and it gets a bit awkward when kids start asking what happened to the boy. 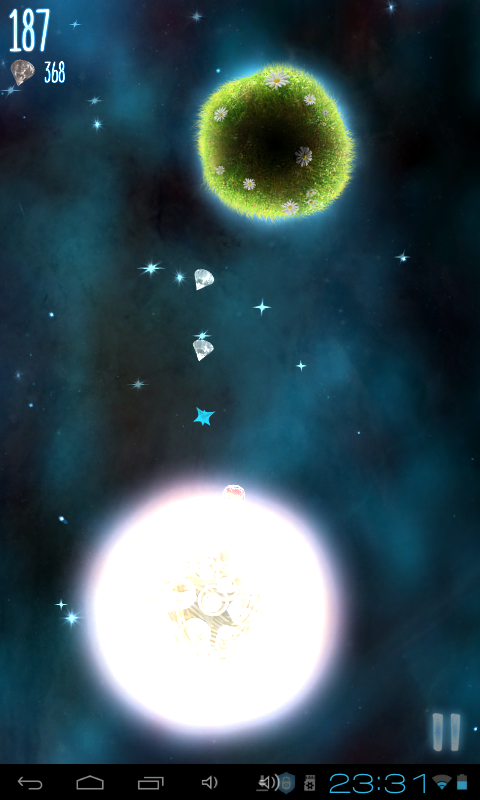 There are two modes in the Little Galaxy – story mode and endless mode. The story mode sends you on quests of increasing difficulty. The system is classic – collect X items in Y time, or somewhere around those lines. You are limited in time, and when it starts ticking out on you, you see a wave of black storm chasing you. If you fail, the darkness covers the boy and the cosmos around him, which provides for a series of other inconvenient questions from the youngsters.

The endless mode, obviously, has no end, and you can hop on and off planets to your heart’s content, but don’t flatter yourself just yet.

The first levels are quite easy, and your only enemy is your impatience. The time-based levels require you jump fast, and that’s where you start missing, and starting over again. However, as you advance through levels, the challenges get trickier, and the time is always against you, so I dare say once you cross the line between challenging and difficult, you might experience all shades of frustration.

The difficulty is also enforced by the fact that each re-start generates a new galaxy, and there is no way you can predict where you can catch that plasma booster. Randomly generated galaxies provide for a greater fun factor at initial easy levels, but increase frustration during tough gameplay. 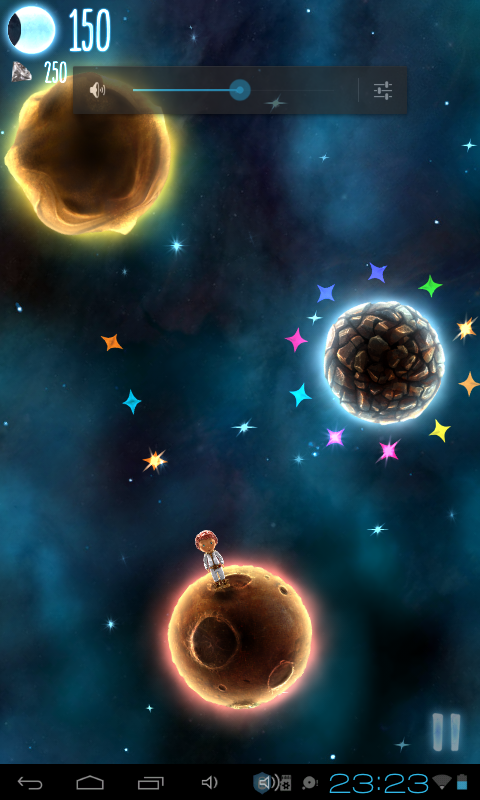 Also, if you have problems with a vestibular system, you might very well get nauseated – everything is spinning round and round, and in different directions.

Additionally, you have to take note of a sun or black hole proximity because they, too, have a strong pull on the floating or jumping bodies, and if you should jump too close, they suck you in.

There is not much to the control system since it’s a one-tap game, easy and challenging at the same time.

The design and sound score department deserve all the praise there is for a mobile game. The visuals are rich and detailed, and saying the game looks beautiful is an underestimation. It’s a dazzling spectacle complemented by atmospheric soundtrack. I get easily hooked on graphically gorgeous games, so if you appreciate aesthetics, you will enjoy the Little Galaxy. 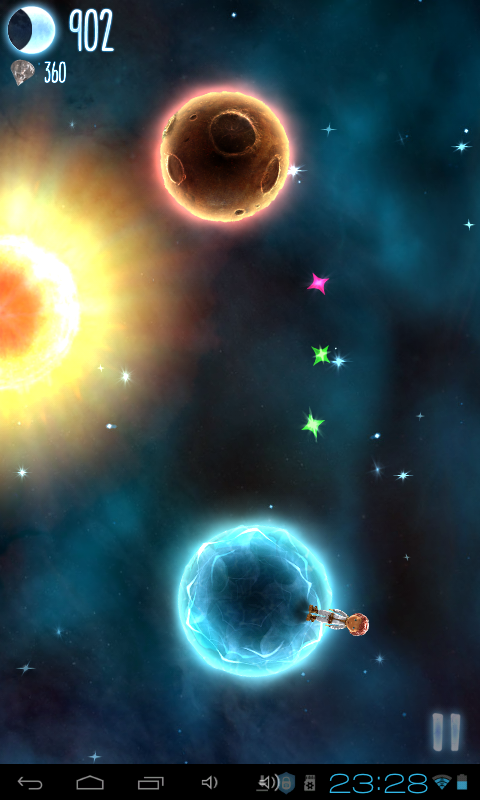 I would not say it’s a ‘keep it for good’ game, but the Little Galaxy has a decent replay value until you have had enough of it. When that happens is up to you, but my guess is when you get to the difficult levels, although if you have nerves of steel, you might actually beat the game.

It is fun to play in short, 15-20 minutes bursts, once a day, or once in a while, but nothing that will get you too persistent. Hence, I would rate the Little Galaxy as a refreshing, fascinating, high quality time killer.

If you download the free-to-play version from Google Play, you get some red gems to revive the boy and proceed with the level. When you run out of them, you will have to start over each time the boy drifts off to space.

There is a great variety of goodies you can buy from the shop, such as boots, costumes, power-ups, but it does not ultimately alter the playing experience. 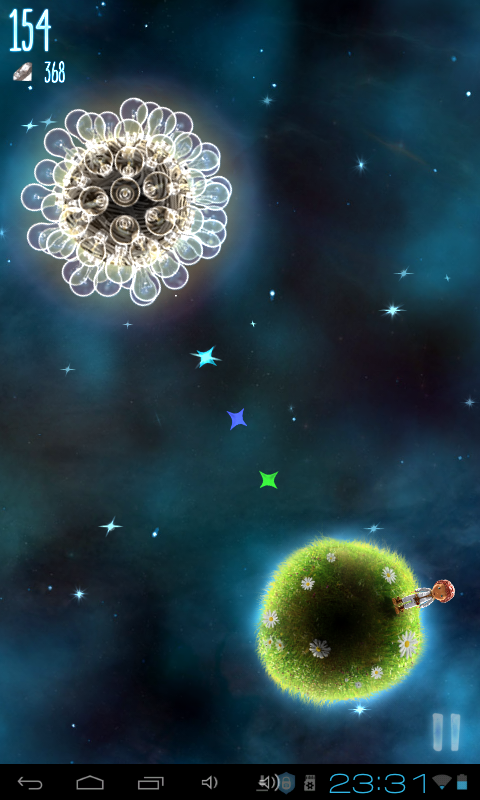 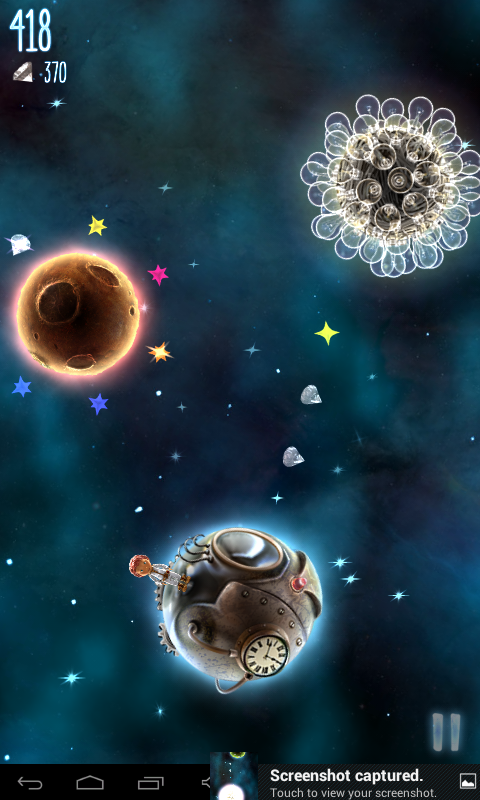 The Little Galaxy is a premium one-tap endless runner and physics-based game available as free-to-play from Google Play store now, and we strongly suggest you give it a spin. Everything about it is galactic and the little hero must have been drawn after the Saint-Exupéry’s Little Prince fairytale. The gameplay is easy enough to suck you in, but once you make it to the difficult levels, you may question your gaming skills. The visuals are magical, and the soundtrack is atmospheric. You probably won’t be playing it for hours on end, but the Little Galaxy makes for a superb time killer you will want to keep.