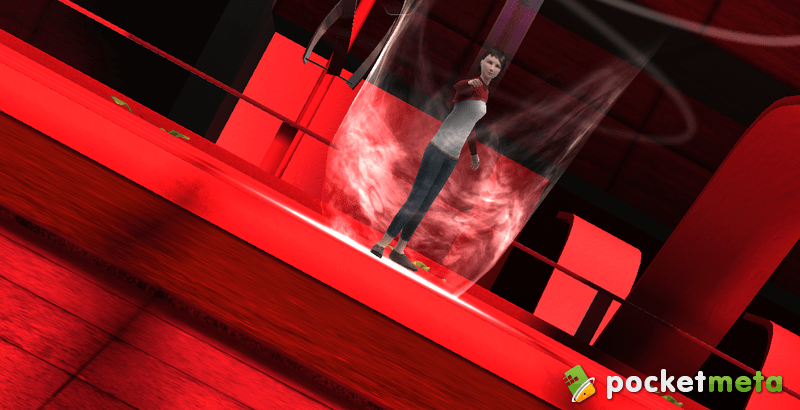 Rarely does it happen that a game “clicks” in all the right places. Mobile gaming evolves in giant leaps, but adventure genre is probably the most challenging to push through from a development perspective. There are just too many factors that influence the end product. Graphics, story, controls, characters, challenges, length, performance – there are too many aspects that, if one of them is done wrong, can ruin the experience. Lost Echo is one such game that for me, personally, became one of the best gaming experiences this year. Even so, I will do my best to stay objective and provide a breakdown of what this game offers, its strong points and its flaws, so that you can make an informed decision when buying. 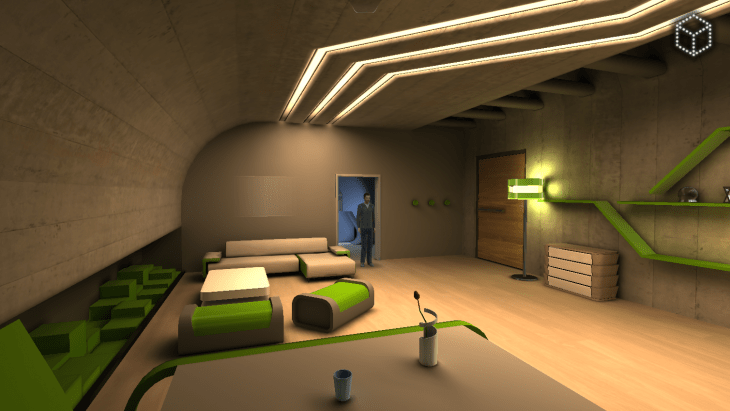 Here it goes. The first thing you will notice is the visual component. Lost Echo is exactly the kind of sci-fi ambiance I was looking for after I watched the Extant with Halle Berry. If you are into tech and innovation, you will know what I mean. The futuristic, yet not so distant architecture, lighting, gizmo and technology – it’s all there. The smart home with the AI doing all the little things in it – heating the microwave, decrypting files, keeping the log of the incoming emails and calls, or the people visiting. I so dig the interior of Greg’s apartment I am keeping a few ideas for my own dwelling. The health tracking implants and how Greg got rid of it because health tracking is just a name for surveillance, in case you’re still in doubt. These subtle elements about the tech, as well as the tech-based puzzles, resonate with the gadget-addict in every gamer. 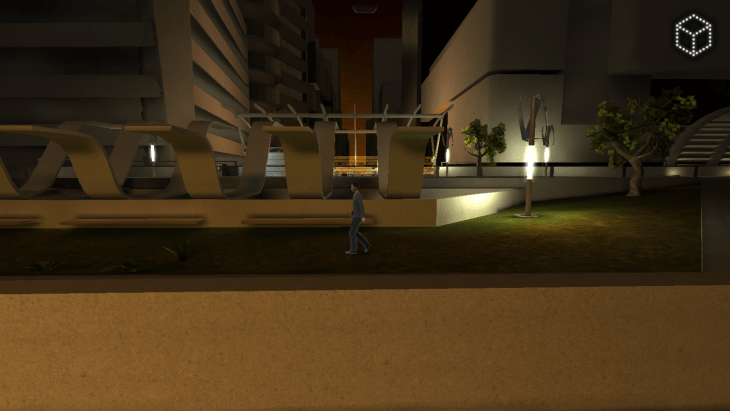 The locations, though contrasting, are a delight to navigate and behold. From the sunlight-filled park to the dim lights and soft sounds of the downtown bar, to the labs and the otherworldly sci-fi locations and dreams, Lost Echo is a visual perfection. At least, to a sci-fi fan and an inquisitive futurologist. A special praise goes to the sound score of the game. Composed specifically for the game, it is diverse, deep and atmospheric to an extent of becoming cinematic. In fact, at some point in my gameplay I thought “This game needs to be made into a movie.” I don’t know which would be better – an actual movie with actors or a 3D animated one, that would preserve the looks and the feel of the original.
The only aspect of the design I disliked was the faces. Chloe’s seemed attractive, but all the other faces just seemed flat, out of place and contrasting to the rich and detailed environments. By the way, Greg is so Elliott (Rami Malek) of Mr. Robot I even thought he might be having a “Fight Club”-style mental disorder at some point. Notably, the initial iOS version of Lost Echo launched in 2013, long before Mr. Robot, so the resemblance is even more striking. 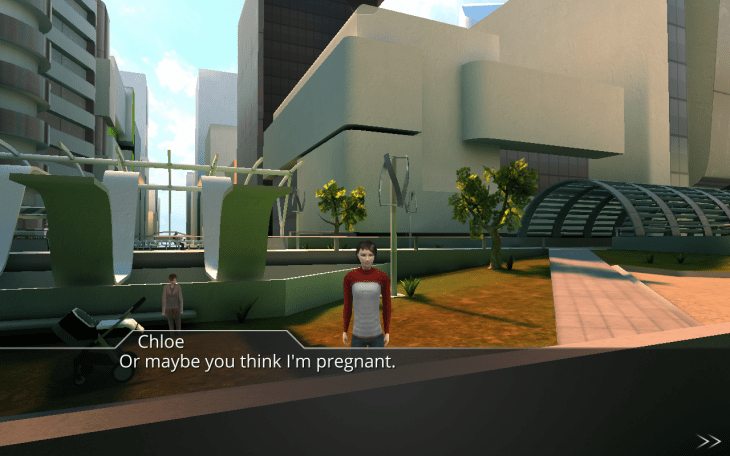 A sci-fi adventure needs an engrossing story that’s central to the gameplay. And Lost Echo delivers. The opening scene is so tense and rich it sets the mood for the entire gameplay up to the climax. Greg meets Chloe in the park. A brief yet somewhat tense dialogue does not really give you the full picture – are they in a relationship, or are they just old friends? At some point I even thought they were in school together, or something. A casual situation in the park ends with a tragedy so abrupt and unexpected it stirs an emotional response that will motivate you the rest of the game.
Chloe disappears in what seems to be a beam of a giant disintegrating machine. My guess about the disintegrator was further confirmed by the fact that no one in Greg’s life remembers anything about such a Chloe. And he knows she was his girlfriend who lived with him. As he returns home from a hospital, her clothes and photos and everything related to her disappears from his house and his gadgets. So, Greg has to find out what happened at the park and where Chloe is. Not to mention what sort of an elaborated prank it is, if it’s a prank. 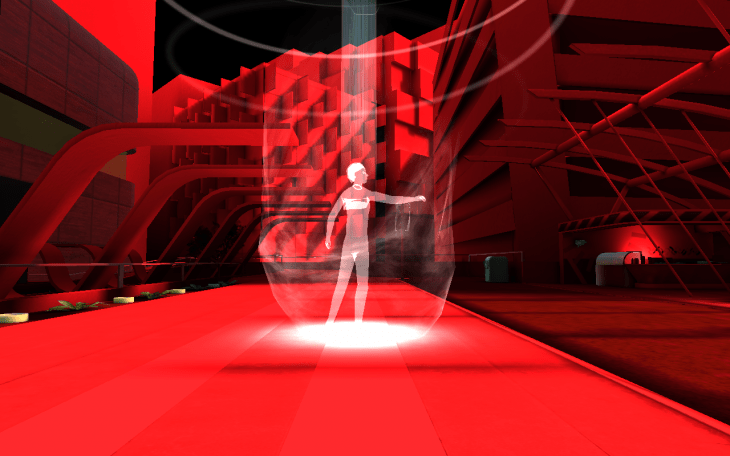 To amplify the spectrum of the story elements, we have a close friend of Greg’s, Tom, who says he can’t remember Chloe, but acts suspiciously. He seems to be helping on the one hand, and distracting on the other. Greg has no choice but to entrust Tom with his investigation because he needs help, and Tom is the guy who knows the right people. Needless to say, nobody trusts the Police or the doctors. Authority seems to have lost its reputation for the average citizens, and it feels just right to avoid talking to the doctor. Not too long into the gameplay, an “Evil Corp” comes into play, and it smells like trouble and conspiracy by then. Then we have a geeky woman à-la Trinity of Matrix, a gun dealer, an ill-humored professor and a bunch of other, side characters.
To say that I enjoyed the story would be an underestimation. It has a mystery, the touches of fate, time travel, altered state of consciousness, and a climax that leaves you wanting more. Some time mid-way through the game, a new twist of the plot makes you view all the preceding events in a different light. Yes, the climax leaves more questions than answers, but it also has a distinct theme and a philosophical meaning. The theme of Greg’s determination, will, love, ability to face reality or doze off into the fantasy world – it’s up to you to read the signs, and to determine what is that this game is trying to tell you.
Yet, I have read quite a few users complaining about the obscure ending, but to put their woes to rest the developer is working on a free expansion to the game Lost Echo: Resonance. The epilogue should answer your questions.
Again, quite a few themes of Lost Echo resonate with the themes of Mr. Robot – surveillance, hi-tech, hacking, a giant anti-human conspiracy of corporations on the one hand and a bunch of rogues on the other. 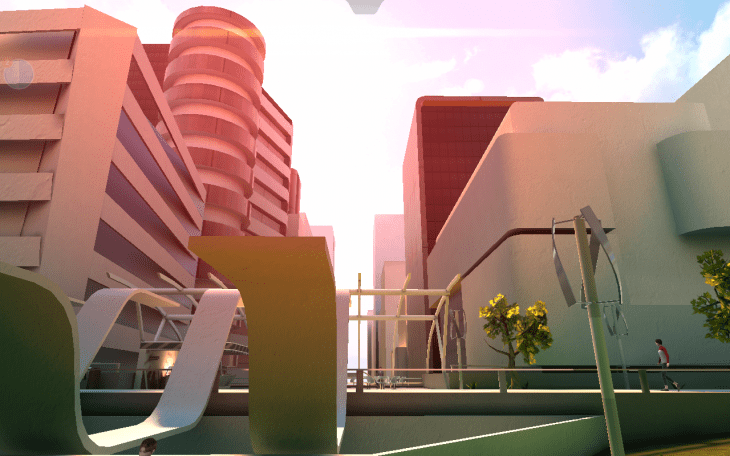 Lost Echo consists of several large chapters, and you play them unlocking new locations. Each location comes with a new character and a few puzzles. All the locations are a part of a bigger picture, and together they create an evolving story. You can’t skip anything, nor can you see what’s coming – the new locations appear on the map as you solve the riddles in the present areas.
The puzzles are different. Some are tricky, some are intuitive. I guess it all depends on your mindset. I don’t play chess and I bet that riddle accidentally. Pure luck. Assembling machines, solving decryption puzzles, figuring out a way to hack into a location, catching a cheater in Poker… Some puzzles are short, others are multi-layered. Yet, they are so naturally woven into the fabric of the story, a puzzle never feels out of the place. 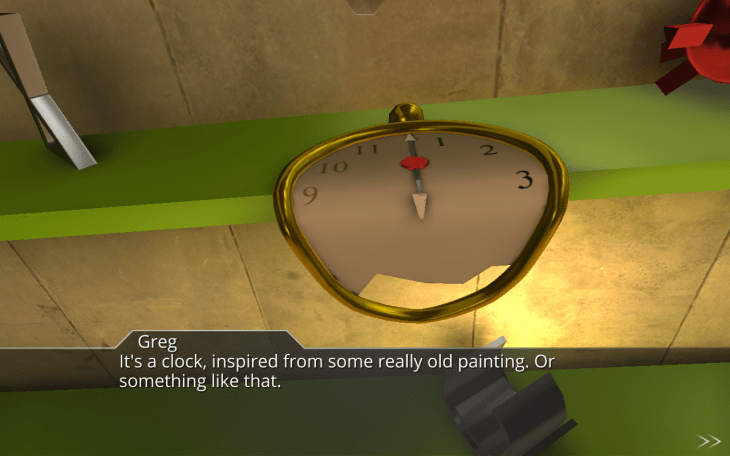 There are two modes in Lost Echo – Normal and Old School. Old School has you playing by hunch, as in any hardcore adventure game. Normal offers more guidance. Tap on the upper icon in the center and navigate to the Hints. Wherever available, you will be able to reveal one or all hints, if you wish. Thus, the game is both accessible for a newcomer and challenging for a hardcore gamer.
There is a heavy portion of dialogue/monologue you will have to go through while playing. Some see it a tad boring; I like how it’s written and how it sheds the light onto the story. It’s got the touch of humor in the right places and it’s realistic, natural, not static or artificial. Very well-written. 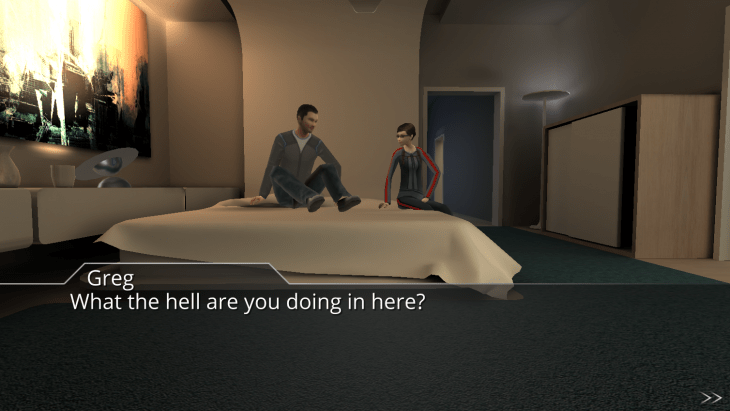 The controls are responsive and intuitive – nothing complex here. Tap to go, or interact, double-tap to run. The inventory lets you apply items on items in the scene or people, or mix items inside the inventory. 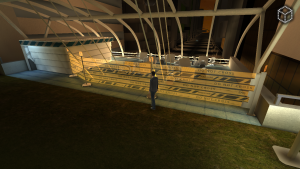 Lost Echo is an underrated gem modestly priced at $3, and by the sheer volume of it I would never think it’s indie. It’s the closest thing to an interactive movie you get on mobile, and it’s a must have for any sci-fi adventure fan. It’s slow, contemplative, atmospheric and gorgeous. Its story has some traditional elements, but it also offers a deeper layer with philosophic themes and unanswered questions. Lost Echo is definitely one of the best adventure games this year.