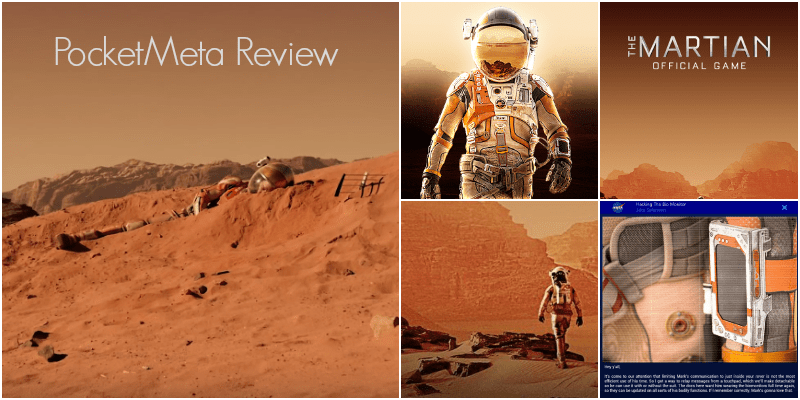 Warning: some spoilers may slip!

Ridley Scott’s The Martian just hit the theaters, and within the opening weekend alone it made more than $100 million worldwide, and covered its production budget. The box office predictions are quite good, too, while the critics sing odes to the director’s successful comeback.

Based on a hit novel by Andy Weir The Martian, the movie just as much as the gamebook follow the story of Mark Watney, a botanist accidentally left behind by his fellow crew members. On Mars. 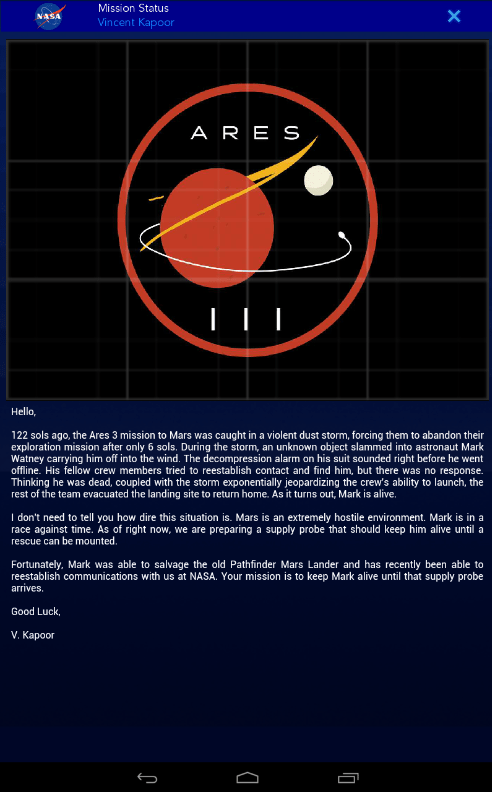 Being a sci-fi aficionado, I love the premise. I also admire Ridley Scott, Matt Damon and Sean Bean. I can’t say I had high hopes for the movie, but I did expect to see something Scott-ish. However, I found myself going against the mainstream tide and dare say the movie was fun, but not as “wow” as the critics sing in unison. If anything, it was entertaining, but not awe-inspiring or groundbreaking. Beauty is in the eyes of beholder, and as far as the red planet is concerned, my heart remains with the 2000’s hit Mission to Mars, starring Gary Sinise and Tim Robbins. THAT was exhilarating. The Martian is a one-time popcorn fun. You may disagree all you want, but each of us is entitled to an opinion. 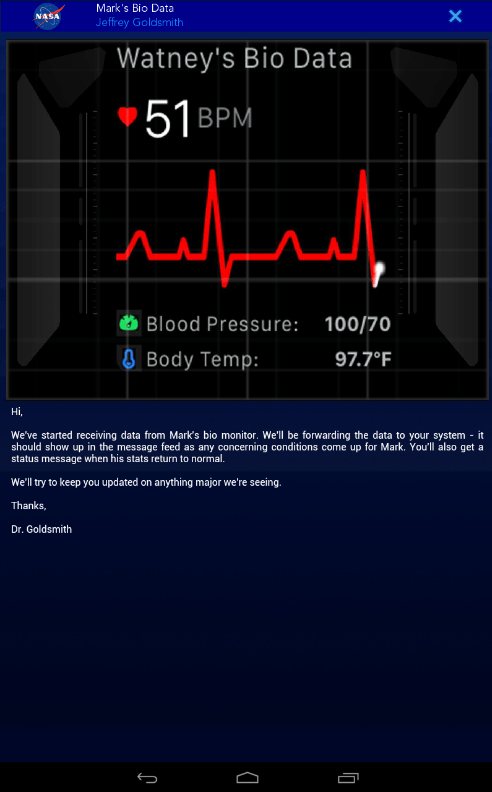 I did not mention my impressions from the movie for nothing, mind you. As much as I was slightly unimpressed by the movie, I did not expect much of the game, either. However, The Martian Bring Him Home by Little Labs might just be one of the best movie tie-ins this season for a number of reasons.

First of all, it follows the book in many critical ways. The first and the most important feature that keeps me coming back for more each time I swear to uninstall is the brilliant sense of humor. I might disagree on a lot of things so praised about the movie, but the spot-on Watney tone preserved in the game is worth a million.

“At this point my a—hole is doing as much to keep me alive as my brain,”

says Watney about the fertilizer he uses to grow potatoes on Mars’ infertile soil. I enjoy “talking” to this guy. Here is how the gameplay goes. 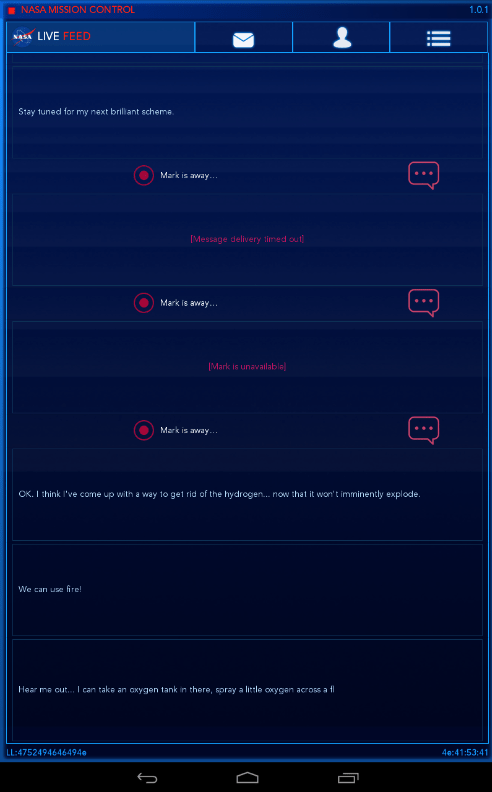 The Martian is basically Lifeline on steroids. There are a lot of talks going on among the players about why Three Bit Studios weren’t credited anywhere in the Martian because the gameplay mechanics, structure, even the sounds are so Lifeline. Copyright issues aside, I am saying this because it will bring the message home to those who have played Lifeline. Those of you who haven’t, here is the deal.

The Martian is a text-based adventure. It is not exactly the choose-your-own-adventure book because there seems to always be a correct answer among the two options you are offered.

You play as a NASA comms man receiving the infrequent messages from Mark Watney. He talks about survival, growing potatoes, his composure, the events of the crash and asks you questions. Your aim is to keep him alive until the rescue mission arrives. No, actually your aim is to bring him home. 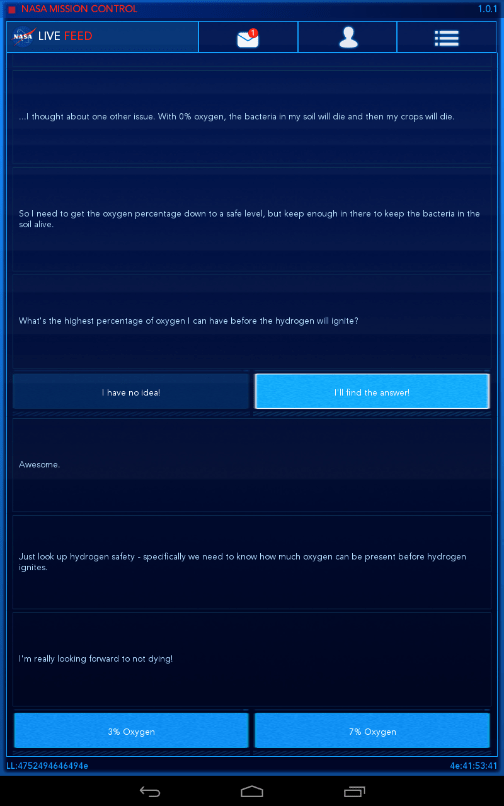 Some questions will be about yourself because obviously Mark is looking for some human connection, being stranded on the red planet for 900 sols. At some point, you might feel like the game is a series of well masked empathy tests, or something along the lines. However, the life or death situations arise way too often in Mark’s position, and you have to help him handle them.

You are not alone in the task, and have an entire crew of NASA specialists assisting you. There is a meteorologist, a psychologist, a doctor, a chemist, a satellite imagery analyst, a botanist, a director and an engineer. And here is where The Martian brings a new element Lifeline did not have – the team support. It comes in the form of the emails you receive as the problems occur. So, whenever Mark has a life or death dilemma, you will always have two options to help him – find the answer in the Internet, or read through these messages from the crew and figure out the answer from their nerd talk as you translate it into the layman terms.

As I said, there are always two options for each question Watney has for you, and in critical situations only one is correct. Mark dies – you have the option to rewind the game to the latest critical decision, or start over again. Some users complained there was no rewind feature, so I am guessing it’s a newly added one, but it’s welcome anyway because you had to re-install the game to restart it in the first version. 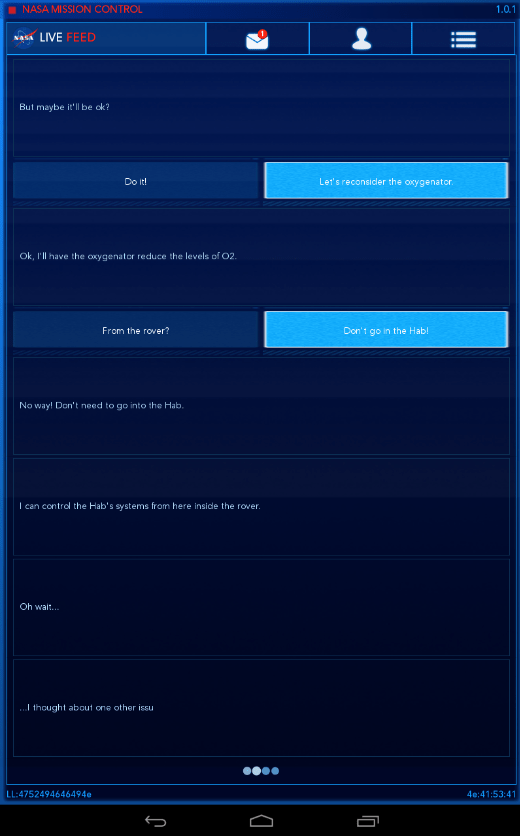 As was the case with Lifeline, The Martian is a real-time adventure that should work just fine for those of you who sport an Apple Watch. This real-time thing can be either a blessing, or a curse. I like to binge the movies and books. I like to consume large chunks of information or gameplay when I have the time and inspiration for it, but I am awful at keeping up with Tamagotchi in real time to take it out to poo. Hence, I don’t keep up with Watney.

If I had the game installed on my phone, it would have been a disaster of a distraction. Instead, I installed it on my gaming tablet, which I power off when I am not playing. I have discovered that force closing the game or shutting down the device lets me skip those times when Mark goes on without me and gets himself killed without me knowing it. 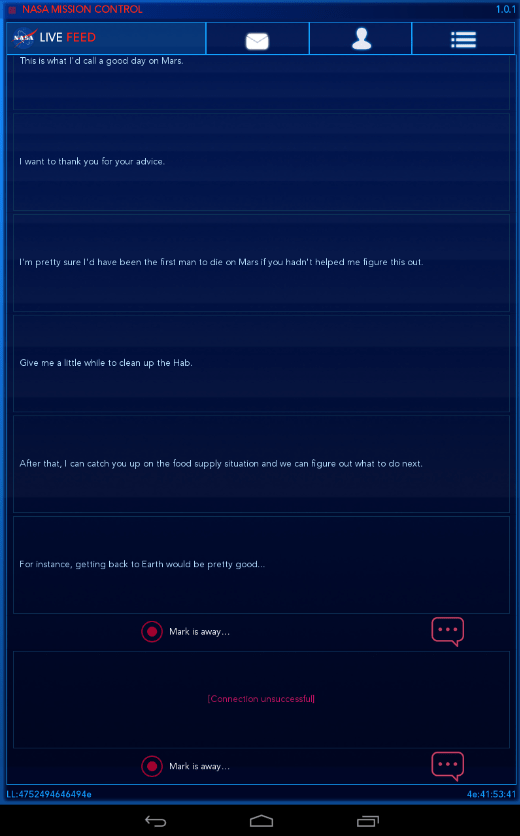 On the flip side, the gameplay sessions are awfully paced. They are mostly short and are nothing like the reading. Instead, the Martian keeps you tense during its short gameplay sessions. You need to find the correct answers for Mark’s quizzes, answer his questions and practice in speed reading as you try to catch up with the text. You will need the speed not only for reading, but also when making decisions. In some cases, if you should linger with your answer for too long, Mark might make a decision on his own, or not do something critical, and die. 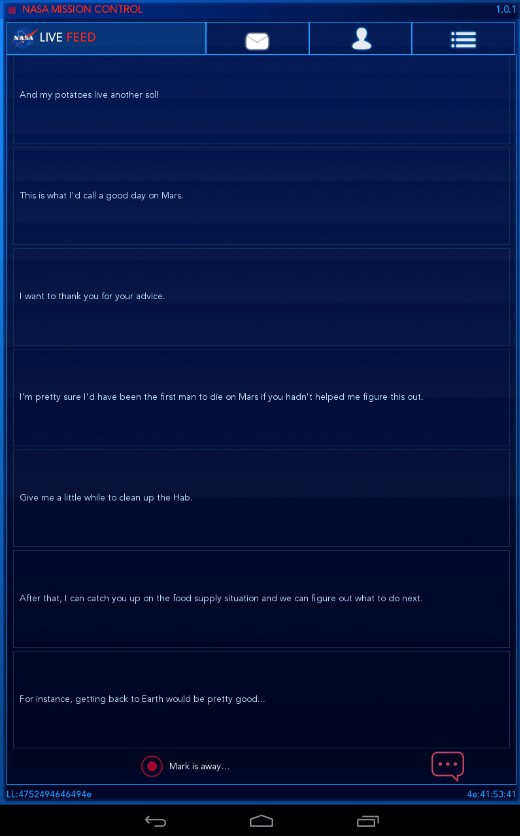 This is one issue that I have with the Martian – the text appears on screen at a very irritating pace. Sometimes it stutters. It appears halfway, then disappears and then reappears again, which makes my eyes hurt. Top that with a small font and I am looking for my eye drops.

The font might be perfect for a watch, but on my tablet it looks ridiculously small and I have to squeeze my eyes to make out the words. I see no option to zoom in or customize the font size.

I also dislike how the music and the sound effects that accompany the messages are so similar to those of Lifeline. I found myself turning them all off after a while.

I disagree with those users who say this game is incredibly emotional. Yes, you can keep up with “Mark” in real time, or sort of. But I haven’t felt a scratch of guilt the first time he died. Maybe because the immediate rewind option is available, but if it weren’t I wouldn’t have played it at all. The one emotional part is the excellent sense of humor and the short, concise writing, which is brilliant. 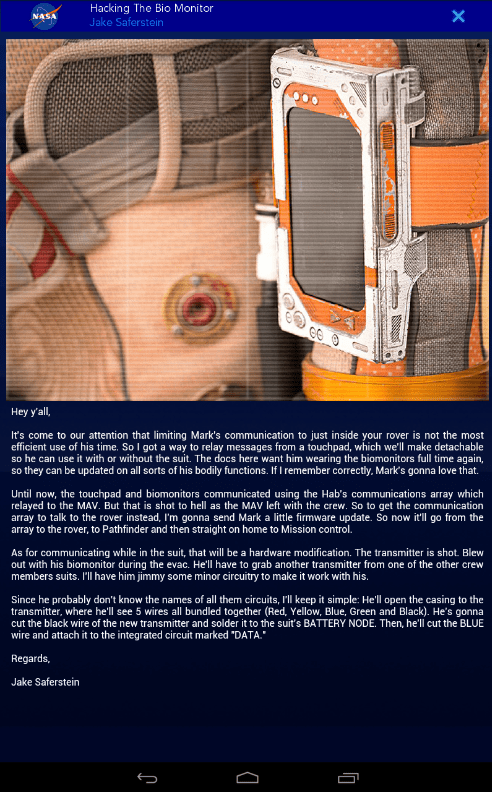 Visually, The Martian looks lively; the menus are intuitive and easy to navigate. Sometimes, the game would stutter performance-wise. An image would fail to load, or the text would start “jumping,” but the looks are nice. A simple option to adjust the font size would be a deal breaker for me.

One menu that I don’t need is the Extras. The book is still set at its regular price, and I don’t wish to watch the trailer. Thank you.

Besides allowing the users to adjust the font size, it would also be nice to be able to choose your own color scheme because the white on blue may not work for some people. An occasional illustration would be nice, too. 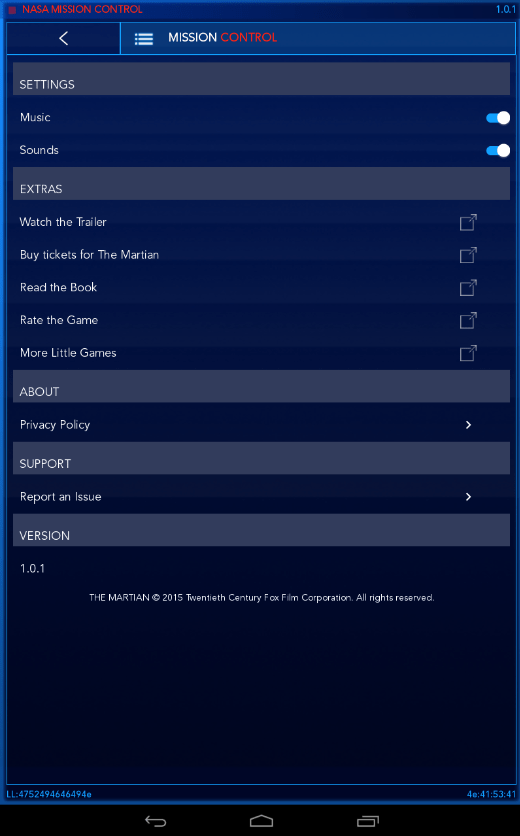 As much as I like how the game is close to the spirit of the book and the feel of the movie, and as much as I like the premium without IAPs vs free-to-play, The Martian is expensive. If I were torn between the Martian: The Novel ($8.55 on Amazon) and The Martian the game ($2.99, iOS and Android), I’d still go with the book rather than with the game. That is, if you are so hooked by the movie that you want more of that sci-fi melodrama. At the same time, if you loved the book, and loved the movie, you will certainly like the game.

Finally, for a premium game priced at $3 The Martian lacks some basic customization options, like the font, the color scheme and the possibility to fast-forward the “Mark is away” thing. 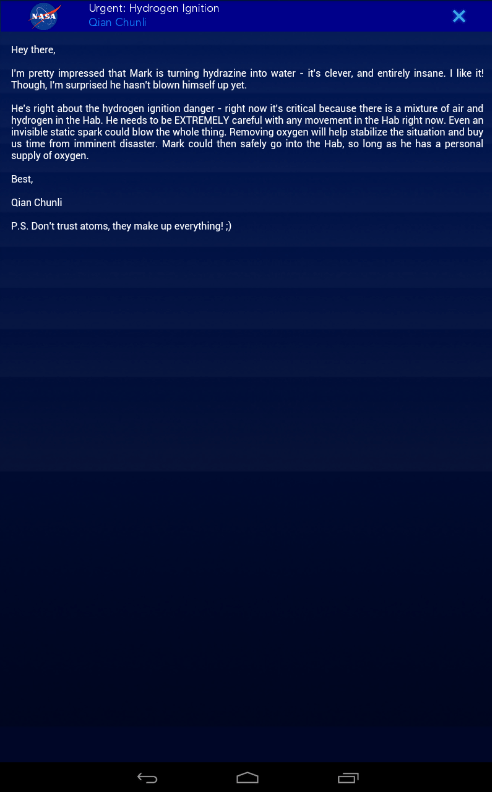 There are several endings, and thanks to the “real-time” folly of the developers, I haven’t reached any of them so far, so I can’t assess the replayability just yet. As far as I can see, I will most likely sigh with relief when this is over, provided I make it to bring Mark home. If not, the waiting game might overweight the curiosity factor. After all, I really don’t care to memorize the potatoes’ scientific name. To me, the replay value is the instantly available option to rewind a bad move.

The Martian: Bring Him Home

The Martian: Bring Him Home mobile game is good, but controversial. I would recommend it to the fans of the book and the movie, and also those who have enjoyed Lifeline and are looking for a similar experience. The same things that bugged me in Lifeline still bug me in The Martian – the real-time back-and-forth and the painfully short gameplay sessions tend to frustrate me more than let me get into the atmosphere. Being a pricey purchase, The Martian lacks some of the basic customization options, and displays an uneven performance on iOS and Android devices. It’s nothing like a graphic masterpiece, and it’s not even a book, although it follows the story rather closely. It’s a series of short and fast-paced exchanges of wit and humor, with the latter being spot-on Watney. If you need an attention-demanding, high IQ Pou stranded on Mars, go with The Martian.

Jokes aside, this game needs a little more work because it feels rough around the edges, and a price reduction, to make it more enjoyable.