While the new Avengers movie, Age of Ultron, was busy crushing the box office with ticket sales — Marvel Future Fight was also crushing the app stores with downloads. The download tallies should come as no surprise, given that this is a free to download game with a story that already has a massive worldwide following. As for just how good of game it is, well, that’s going to be left up to interpretation. Freemium games can definitely end up being a headache, but when executed properly, they can actually be a great addition to your mobile game collection. Does Marvel Future Fight fall under the former or ladder category? Let’s find out!

When I originally found out about Marvel Future Fight, I was pretty excited about the idea of a content filled Action-RPG based around the Marvel universe. As I looked into it more and found out more information, my excitement kind of went on a roller coaster ride. I had assumed it would be a Freemium game (which it is), but was really hoping there wouldn’t be an energy mechanic, and that the IAPs would be purely cosmetic — a Freemium model that I feel works very well for both the player and the developer. 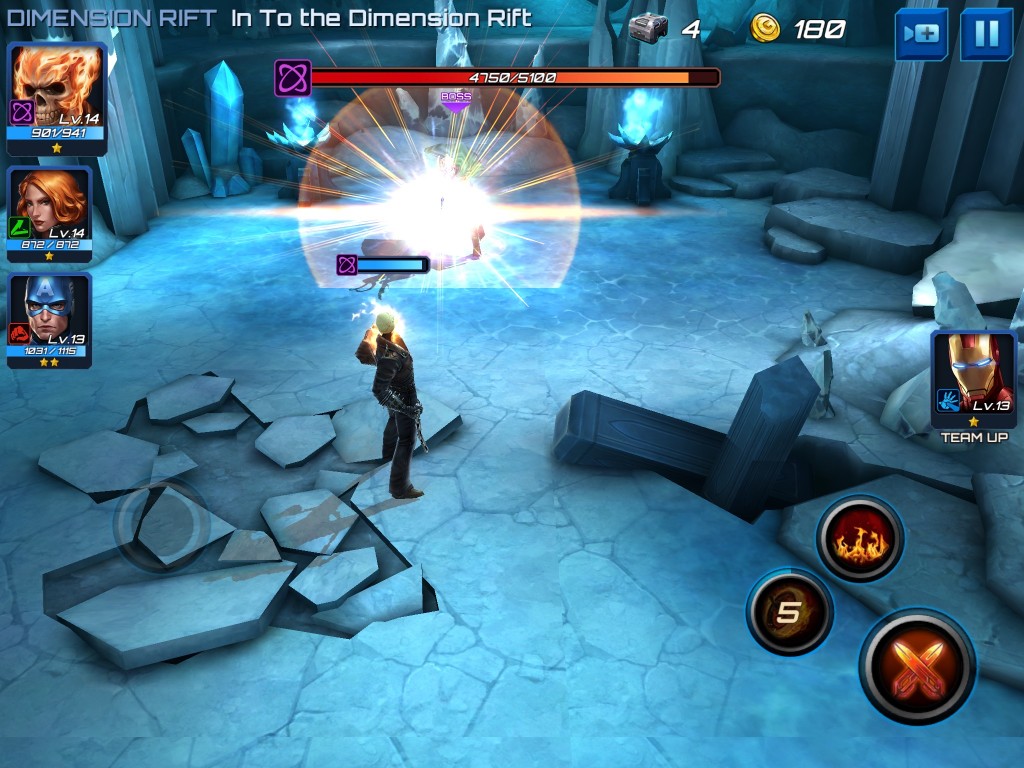 Then, I found out there was a decent amount of depth to the character progression, a lot of different missions to play through, and plenty of characters to unlock. The arena mode looked a little silly to me, but it was still nice knowing there would be more content outside of the main game — something I wish there would have been in the recent Action-RPG Implosion, but I still loved that game. With all of that said, I really wasn’t sure if I was going to really enjoy the game, or end up being really frustrated.

Visually the game is pretty solid, nothing extraordinary, but definitely has the right feel for a Marvel game. I am really big on visual variety, which Future Fight excels in with the characters, as they all have unique models and abilities. The eight chapters each have their own theme, but re-use a lot of the same textures and enemies, with some missions feeling almost identical to each other. As for how the Interface looks, it’s got a very SHIELD headquarters type of feel which works for the game, but some areas could have benefited from a bit more polish and sleek design. It is easy to get acquainted with however, as everything is pretty well organized, and the tutorial does a good job of showing you the ropes.

Despite the wide array of characters, the multiple ability options, and the non-linear upgrade system — the game still ends up being a pretty intense button masher. You’re able to bring three characters into the mission, and swap out who you’re playing as on the fly (with a slight cool-down). However, it quickly becomes a trend of using your abilities on one hero, and then switching to another to use their abilities while the previous one recharges. You’ve got basic attacks as well, which become a lot more useful if you prioritize your gear enhancement to one character’s weapon, but otherwise they’re not as efficient as hot swapping heroes for abilities.

There’s no dodge roll, but you can still evade some enemy attacks, and building a specific character to be a bit more of a tank is usually a good idea. A combat triangle is also involved to add a bit more depth, which adds to the total number of variables to consider when assembling your team. Overall, even though the combat felt pretty bland at times, the strategy and RPG elements behind the button mashing actually make it quite a bit more enjoyable. 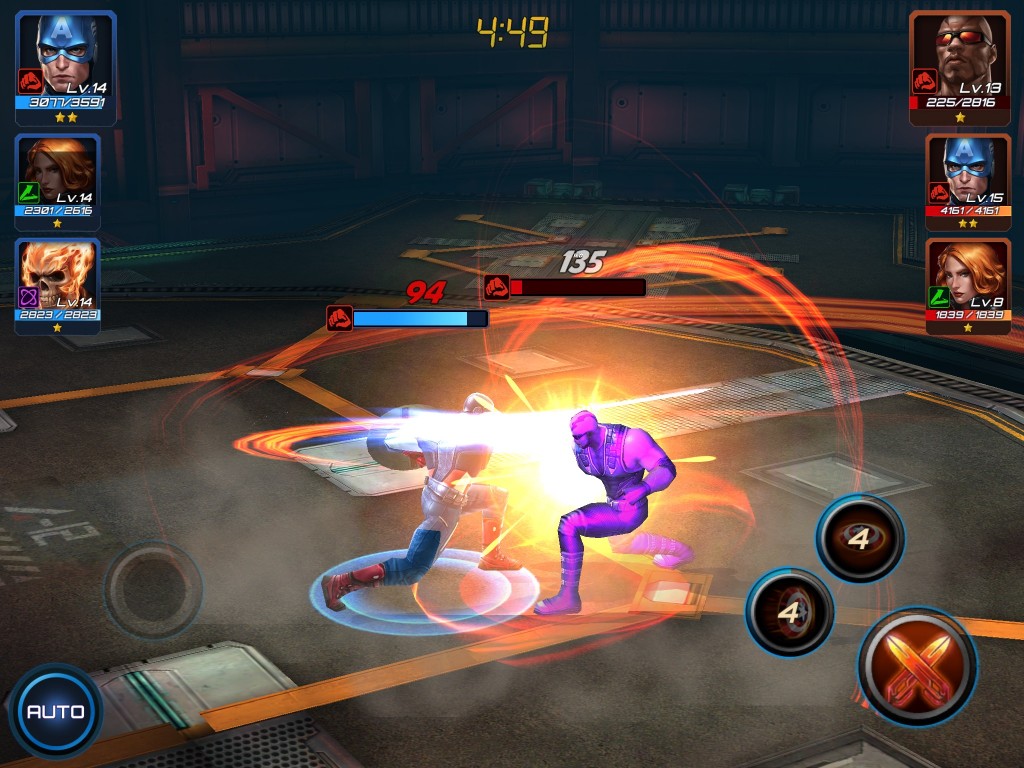 I have yet to dive too much into the Arena mode yet, but it appears to have an even higher emphasis on strategy than the campaign mode. Arena matches are set up more like a side-scrolling fighting game rather than an Action-RPG where you can move in all different directions. This makes it even more challenging to really dodge attacks, so it more-so comes down to having the right heroes on your team, and timing your abilities properly.

Once you get into the swing of things, Marvel Future Fight has a pretty consistent process. You’ll progress as far as you can in the campaign until things get too difficult, and then you’ll likely end up farming certain missions for biometrics to unlock new characters. These “biometrics” are essentially a unique currency for each character, and once you’ve got 20 of them you can unlock that character. You can obtain them from missions, chests, and other various means — such as a daily log-in that gives you biometrics for a certain champion every day.

Every time you unlock a new champion, you’ll probably want to start playing it right away to test them out. However, this is tricky because they start out very weak, so you’ll either want to save resources to boost their level and gear — or play some old missions to get them up to speed. The nice thing is, you can pretty much bench that character and use your higher level characters to carry them through the mission and still get EXP. You’ll also acquire EXP chips from playing missions, which can be used to simply grant EXP to the character from the home screen. 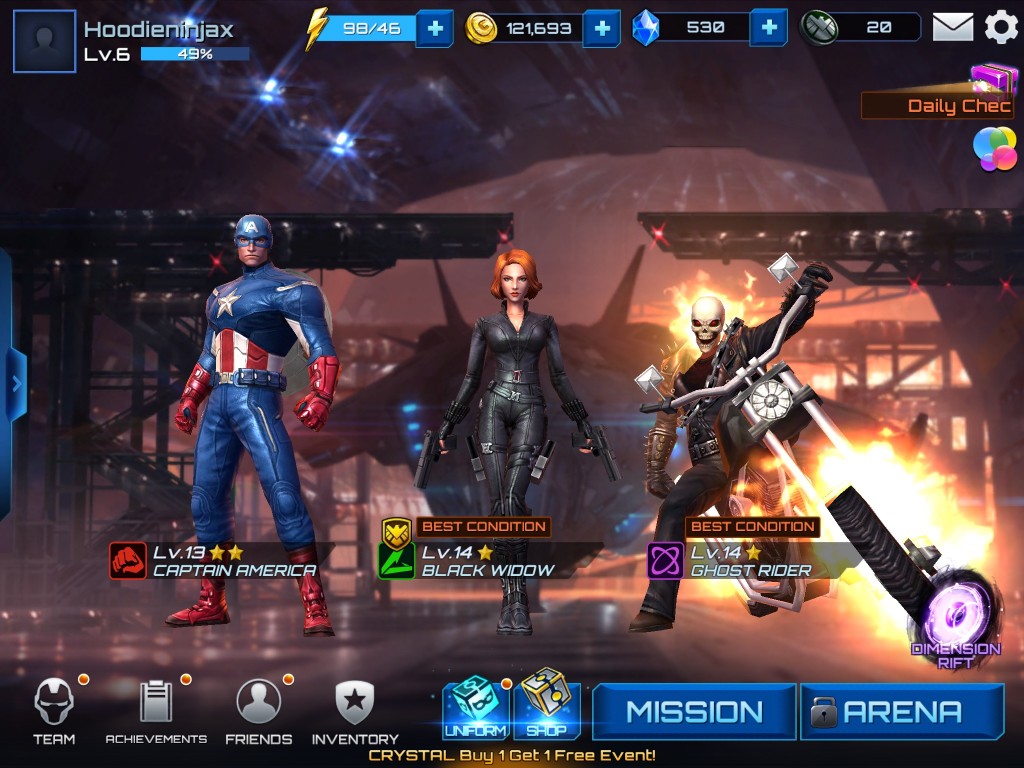 It can be very hit or miss when it comes to how often you unlock new heroes, which is probably the most frustrating aspect of the game. Regardless, you’ll definitely have enough heroes to fill two teams by the time you complete Chapter 2 without spending any money, which isn’t too bad. There is plenty of grinding involved in the game, but you really have to expect that with any free to play mobile Action-RPG.

There are a lot of different things that can be purchased with crystals, which is the premium currency in Future Fight. Although you can get crystals for free, the pace is very slow, and you’ll likely be saving for quite a while if you want to spend them on a guaranteed hero. Currently, there are quite a few different options for buying crystals as well. You can buy crystals individually or in packages that contain not only crystals, but gold, energy, biometrics, EXP chips, and more. Pacakges range from $5 – $50, and similar packages that don’t offer crystals can be purchased for 1,500 crystals.

The shop has a great deal with “Tony Stark’s Stash” right now, which offers 200 immediate crystals, as well as 75 bonus crystals every day you log-in for the next 30 days — a total of 2,450 crystals if fully utilized. This is a $4 purchase, whereas a standard 165 crystal purchase is $3 (although there is a buy one get one free special for this right now). It doesn’t appear to be a special deal, but we’ll see if it sticks around.

Other purchases can be spent on a 1 or 3-day EXP booster, gold booster, or SHIELD EXP booster. These will run you either 135 for the 1-day, or 365 for the 3-day. Energy recharges are 100 crystals, and gold is roughly 10 crystals per 1,000 (starting at a 5,000 gold purchase) unless you buy in bulk. Chests are where you’ll be able to get heroes and biometrics, but it doesn’t guarantee one or the other. These are 240 or 440 crystals depending on the type of heroes it contains.

Even with all of the different things you can spend crystals on, you’re still given a fair amount for free — although most of this is early on, and the free crystal frequency dwindles rather quickly. 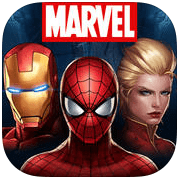 In the end, Marvel Future Fight is a game that anyone can definitely enjoy. It’s easy to get acquainted with, offers simple yet hard hitting Gameplay, and has a plethora of content to enjoy. Energy timers, IAP emphasis, and other restrictions are a bit of a drag — but you can still dump several hours into the game without ever feeling the need to spend a penny.

Obviously those who are completely anti-freemium might disagree with the rating, but I’d love to hear your comments anyway! Feel free to share your opinion below, or head over to our forums for some more mobile discussion.