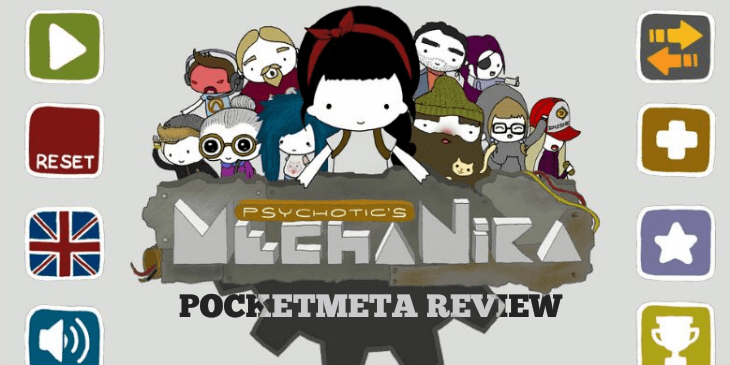 If you read MechaNika’s description on Google Play, you might get misled, totally. A 7-year old girl is clearly much smarter than her classmates, her teacher and her parents, who completely ignore her, as much as everyone else. So, the smart child decides to create a super-powerful weapon to destroy the world to have a fresh start, so to say. The first time I read it, I thought it was some sort of point-and-click affair for the kids, building steampunk gizmo and solving puzzles. I was wrong.

MechaNika is a dark, horrid and scary story, totally inappropriate for children or teenagers. Is it good? Oh, yes. Is it funny? Uh-huh… Then what’s wrong with it? That’s the catch – MechaNika is a mirror of the modern world, and the worst thing about it is it’s absolutely normal, as absurd and psychotic as it seems. Or rather, whoever thinks it’s normal is nuts, and the remaining few sane people need to come together and build MechaNika.

A few giggles and a cold sweat down my spine

I see excellent reviews on Google Play, and I myself can’t help but give this game a 5 star review. However, what scares me is how users admire the scary reality and laugh, but during my gameplay, I mostly was aghast. Seeing a 7-year old get regularly drunk to the point of alcoholism, ignored by pretty much everyone including her own family, hanging around drug addicts, female, male and transgender prostitutes showing off their “stuff,” freaky construction workers, 40+ year old virgin males moving their butts in tight leggings while trying to attract a female for mating is… I don’t know. It’s sick. And guess what – MechaNika is merely a reflection of only a small fraction of things the modern children are going through and are exposed to these days.

School bullying, the Common Core, indifferent teachers and headmasters, self-absorbed parents glued to E!, non-filtered adult content on TV at prime time, public places turned mating ghettos and a desperate, insatiable gluttony of humans for freedom to do whatever obscenity that comes to mind – is it not the world as we now know it?

Nika is 7 and she comes from a seemingly well-off family. She’s got her own room and a computer in it. So does her older brother, who ignores Nika. Her mother is a tattoed cartoon depiction of Kim Kardashian, obsessed with E!, make-up, clothes and celebrities gossip. She, too, ingores Nika.

He father is a bike mechanic and a pretty good one, but he doesn’t really care what his daughter is up to. Her Grandad should know better, but he’s just a self-absorbed, senile moron. Her school teacher is so flagrantly indifferent and dumb, my knuckles ache I want to punch her so much.

There is a whole town around Nika – her school, the shops, the restaurants, the houses, the streets and constructions sites, and a whole multitude of other places. And every single place makes me sick. Her school is gated and the fence is electrified, so each time she tries to exit she gets electrocuted and swears she’s going to burn this place down some day. 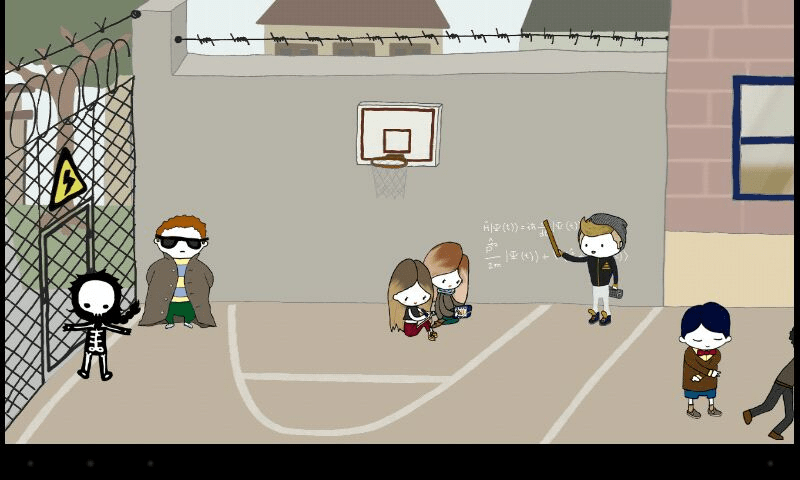 Her friend Agatha’s place is… seriously, Charlie Hebdo could learn from this developer. Agatha is a butcher’s daughter and she really likes meat. She likes to eat it, she enjoys to cut it and she even spends the nights away in her parents’ shop selling meat to late customers.

She came up with a devious plan to make animals she eats into her obedient “friends” – I want to make them think I do them a favor by eating them, because it’s a cruel world, and when I eat them, they’re safe inside of me. So, she came up with a religion, where a swine sacrifices himself in the name of Carnivorism, professing all swines should be happy to be eaten. Inside the butcher’s workshop, Agatha has a huge crucifix with a recently crucified pig on it, and the other animals – pigs and rabbits – sit solemnly around the cross, in silent prayer. While Agatha sermons them about the virtues and the selfless act of the slain pig… 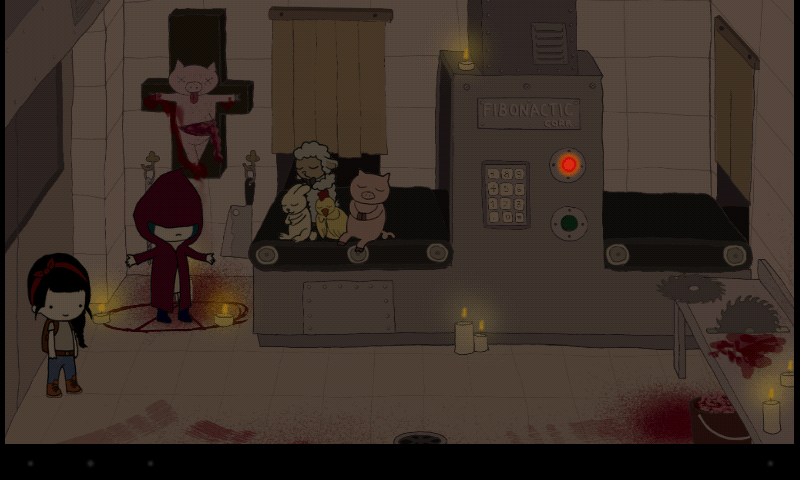 Don’t know how about you, but I had to make a pause after that scene in the butcher’s shop. I am pretty sure it’s not entertainment anymore – the game dives so deep, at some point I felt like I was staring into the abyss and the abyss was staring back at me. The nauseating part is – MechaNika is what we see on TV and on the streets every day. Is it not a psychotic world?

So Nika, being a smart and sane, yes I insist on her being sane, tech nerd as she is, writes a manifesto, where she says all the things that are not cool should be destroyed. Not cool in her verbiage is everything that is hurting her, even though she would not admit it. Apparently, the drug dealer and the creepy Agatha are going to survive the apocalypse she has in mind to wipe the not cool things and start over again, to build a better world.

As far as the gameplay is concerned, everything about MechaNika is pleasantly familiar – the point-and-click adventure fans should feel at home here. You tap to make Nika walk and double tap to make her run in the direction you tap. Wherever you are, there will be things to interact with and people to talk to. The goal is to assemble a MechaNika, a gizmo consisting of the explosives, shrapnel and other things she intends to find, buy for pocket money or steal.

She has a backpack, where she keeps all the things she finds, as well as a USB drive (tap to save the progress), a key (tap to go home) and a bottle of her special cocoa + cognac concoction. Whenever you feel you are walking in circles, let Nika drink that stuff to “see things clearly.” My heart is bleeding at this point… 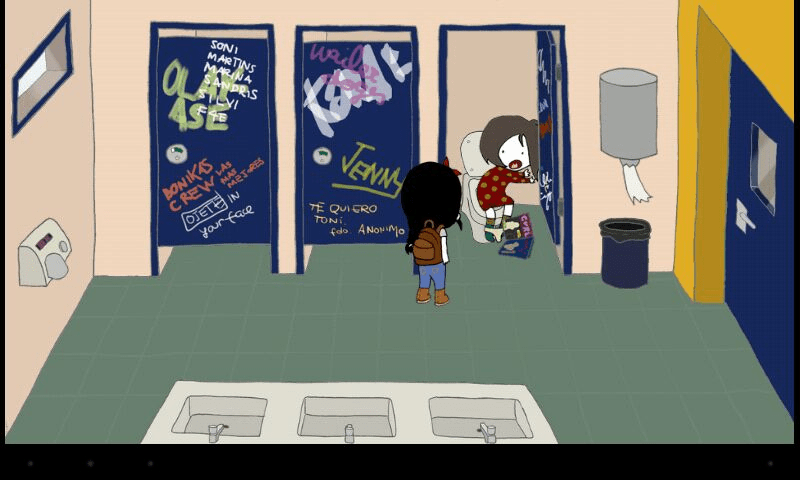 The dialogues are fun and despite being a series of multiple choice to and fro, feel natural. As Nika approaches a person, she has a few ideas about how the dialogue can be handled, so you tap through the options and choose the ones you feel can get you somewhere. Sometimes, the seemingly useless people give you important clues, so here is the rule of thumb – talk to everyone, as many people as you can.

Here is an example. As Nika was walking along a street, looking for a repairs workshop, she passed by a restaurant. Accidentally, I tapped on a couple sitting on the terrace and was ready to back off because I did not want to waste time talking to strange people. The couple turned out a pair of gods who created the world, which Nika is about to “spring clean.” It’s a pretty interesting conversation – don’t pass them by.

Interacting with the backpack is plain easy and Nika is incredibly strong, carrying all the things she stuffs in there. 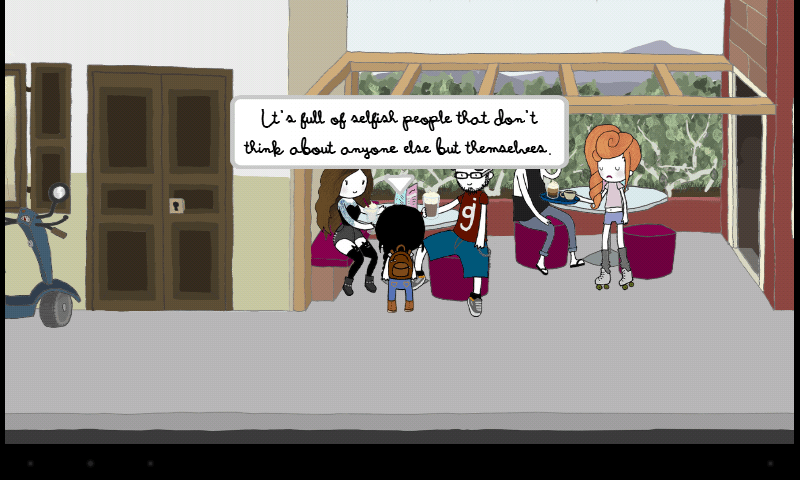 Don’t know how about you, but I need Google’s help to play it. For one, I don’t know that Fibonacci number, or whatever it is, and I can’t remember which robot of all the world renowned robots needs two human operators, so I probably won’t win the freebie for Nika’s machine. Seriously, of all the robots, I only remember the name of Optimus Prime, but I am pretty sure I’ve watched all the other movies referenced in that challenge – I just don’t know the robots’ names, and never really cared to. I might as well do a reset and start over to make things right this time. Besides, the description says there are different ways to solve each puzzle, so you might want to explore that.

MechaNika is a relatively short game and depending of how much free time you have on your hands you might finish it in one go, like the Monument Valley, or in several days. The replay value depends on whether you are satisfied with how well you’ve done the first time. As finite as it is, MechaNika feels complete, self-sufficient and highly polished.

It’s a premium title; there are no IAPs. The game is totally worth the price. 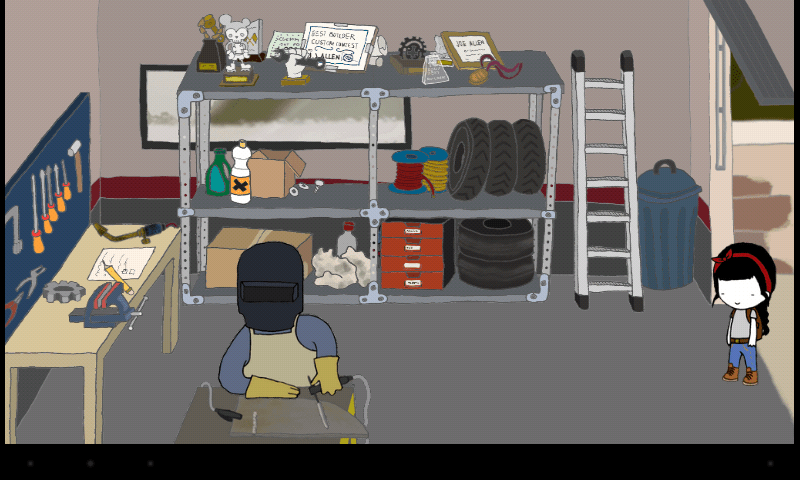 MechaNika is hand-drawn, and obviously, a lot of love has been invested in it. Its cartoonish style is unique and is full of personality. Can’t say I enjoyed watching some scenes, though. The robot-clad guy’s mating dance is controversial, but the prostitutes advertising their working body parts are.. I’m out of adjectives.

The characters are neither adorable, nor beautiful – it’s that peculiar Regular Show style, which is perfectly fitting the gameplay.

I haven’t had any performance issues other than a few characters going black in the construction site area. Never mind, I don’t want to see that other male prostitute anyway.

The game auto-saves when you exit, so don’t worry if you forget to tap the USB drive to save. There is also the leaderboard option for the socialites. 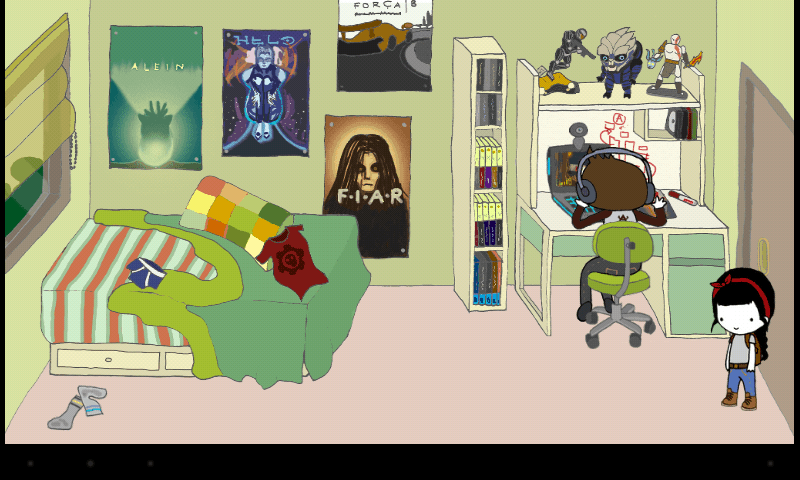 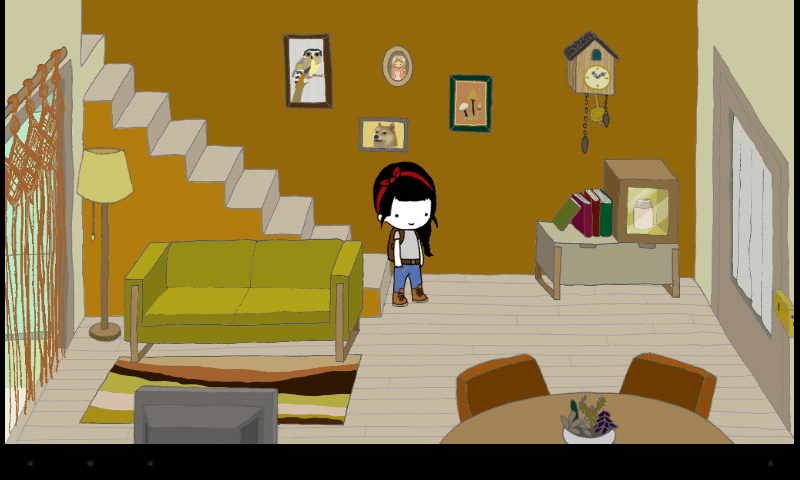 I don’t know if the developers intended to put the ideas I get when I play the game, but I think it’s a must-have game for the parents. Maybe some parent freaks out when playing this game to the point of actually beginning to pay attention to how their children live, what they consume and what they perceive as normal.

My niece is a first-grader and she likes to play the games I have on my devices. She took a sneak peak at MechaNika and got upset when I told her she can’t play it with me. Why – because there are loads of bad things, grown-up things in there. “But I saw children there,” she said, “aren’t there children in the game?” Yes, there are, and it’s a bad thing. There should not be any children in the middle of this adult mess. Period.