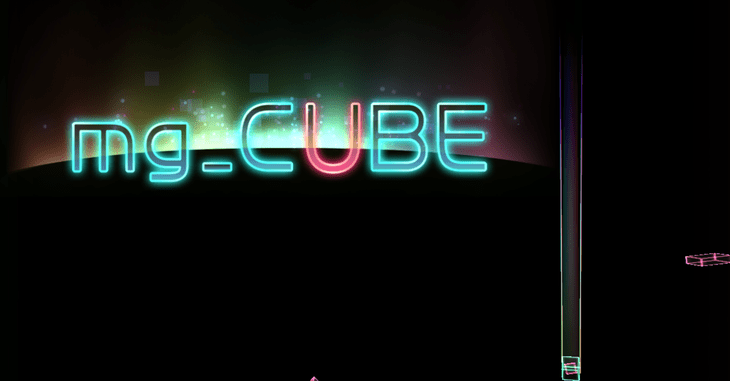 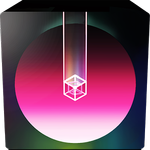 mg_CUBE was on one of our February roundups of new Android games worth your attention, and as a decent time killer, twitch game and puzzler, this game is really worth checking out. Beautiful neon visuals, awesome music and moderate challenge make it a perfect free addition to your gallery of games easy to pick up and start playing, but also to get hooked on for a while.

You control a neon glowing cube by tapping either on the right, Red, side of the screen, or the left, Blue one. The Cube should be powered by the Red energy when jumping to red platforms, and likewise, it should be powered by blue energy when it jumps to blue platforms. A pretty easy premise, and the initial stages are dead simple – hop on and off red and blue platforms, collect upoints, unlock more levels and special challenges – play those and enjoy yourself.

The gameplay itself is very enjoyable, and as you progress throughout the levels, mg_CUBE offers some very decent fun to be had here, with reflex-based puzzles of a surprising depth. 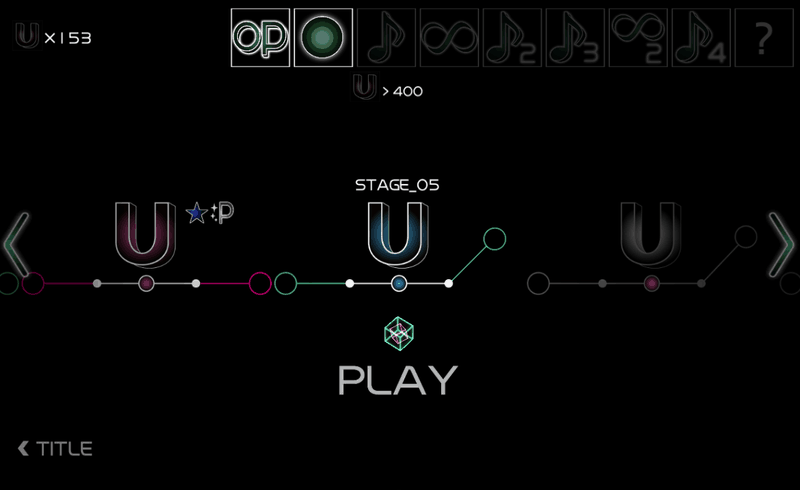 mg_CUBE has an exhaustive tutorial. Why, I would even put it as exhausting because it explains twice what is evident from the first time – how to manage the blue and the red parts, which is identical with the only difference being which side of the screen you should tap.

In fact, Tutorial will be getting in your way more than you wish it did. For example, the first special challenge is the Blue Slider, where the controls are reverted and you need to press and hold the Red energy button as the cube slides through the blue slider. Then, you need to release the button to let the cube jump in the right spot, which would propel it to the next slider, and so on – tap and hold to slide, release in the right spot to jump to the next slider. 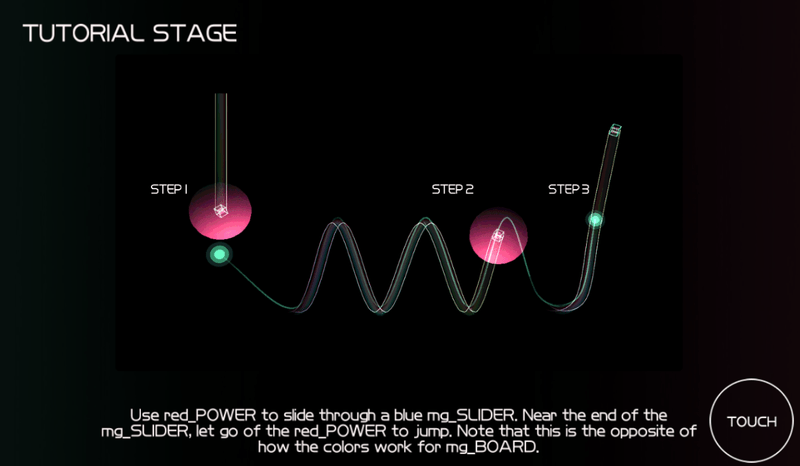 However, the game shoves the tutorial in your face every time you replay, and there is no way to turn the darn thing off – it is simply off-putting, at least for that special challenge. The tutorial does not need to be there every time I replay. Moreover, it pauses the gameplay in three spots – why on Earth would it do that, if not to interrupt the player and prevent them from jumping in the right spot?

That Tutorial nag is probably the only one I encountered, and while it is not how it works in regular levels, the special challenges need to be adjusted. Better yet, players should have an option to turn the tutorial off. 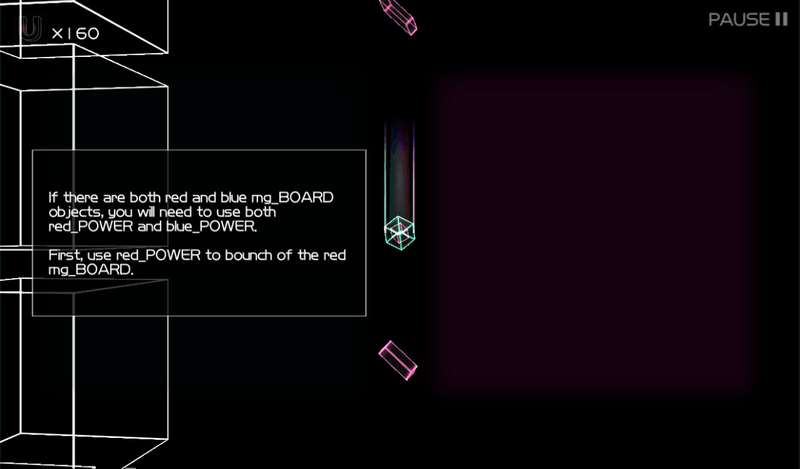 Besides the levels and special challenges, I haven’t found any settings or customization options, which is a pity because it would be nice to have an option to turn off the tutorial once it’s understood.

Retrying is tedious – not in a way of the number of retries you need, but in a way that restarting a level requires two taps. One tap on the Pause button before the level completely halts, and it’s a lengthy process with all the music and effects of slo-mo falling. The other tap is on the Retry button. Thus, the first challenge level I unlocked kept bothering me with the never ending tutorial, which paused the game in mid-jump to display the same instructions over and over again, preventing me from actually jumping. Yet, the game made it difficult to restart quickly. 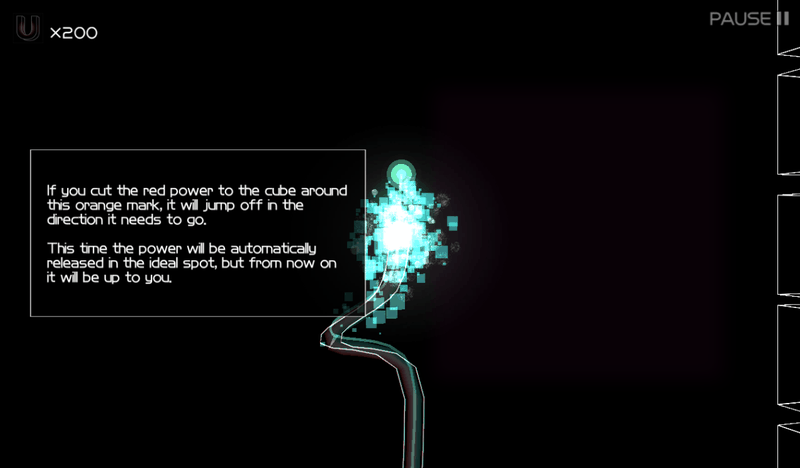 I love the Tron-like minimalist style of mg_CUBE. The black void on the background reminds me of Flynn’s grid, while the neon, transparent structures look intriguing and as sci-fi as the mysteriously glowing cube does. The game does not make use of many colors, but the ones it implements create a dazzling spectacle accompanied by a wonderful soundtrack and sound effects, like the water drops when the cube hits the bottom as you fail. Or on the contrary, the fireworks blast off in a bright Abu Dhabi like feast as you complete the level.

I also admire how the in between the levels transitions work, when you pay in upoints to unlock the next level and the chains of the levels get connected.

A word of caution – the game will not suit the colorblind people, so don’t waste your time if this is your case. 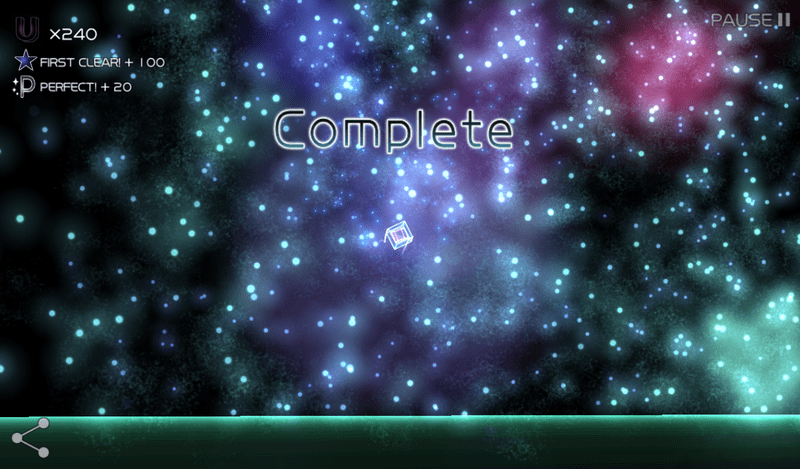 Now, this one is a confusing part. The Android app is free of charge; it does not even have IAPs. At the same time, the iOS app costs $2.99, and I am not surprised it does not have any ratings, yet, for the game is a casual twitch entertainment with no marketing campaign whatsoever.

The Android version, as I said, has no IAPs, and each level you play earns you upoints for precision and number of retries – the less, the better. Each new level requires 100 upoints to get unlocked, and it’s pretty easy to earn that by completing a level without a mistake.

At the same time, there are special challenges, and new music, which require more points to unlock, like 200, then 400, then more. Once unlocked, you do not need to pay for playing them. Hence, at some point in the game you might play easier levels to grind for some upoints, but provided the levels are short, grinding is not tedious at all. 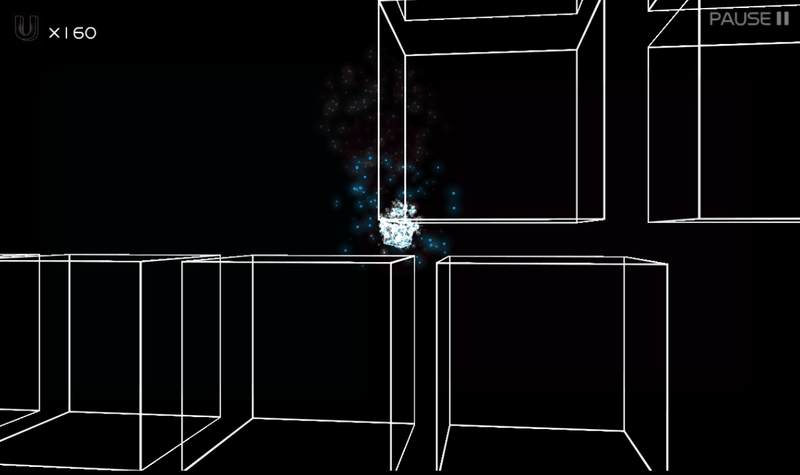 mg_CUBE features 51 levels of increasing difficulty in the regular mode, where you play from checkpoint to checkpoint. Plus, the game features special challenges you unlock in exchange for upoints. These special levels have different rules and sometimes reverted controls, a more complex layout, or a different design of the platforms, or the game mechanics altogether, like sliding instead of jumping. Overall, there is a good deal of content to enjoy here. At some point, you will need to replay easier levels to unlock special challenges that cost upoints, but the good part is the levels are really short, so grinding is quite enjoyable.

Overall, I would say you play to unlock more levels and special challenges while replaying the ones you already beat does not seem like a lure. 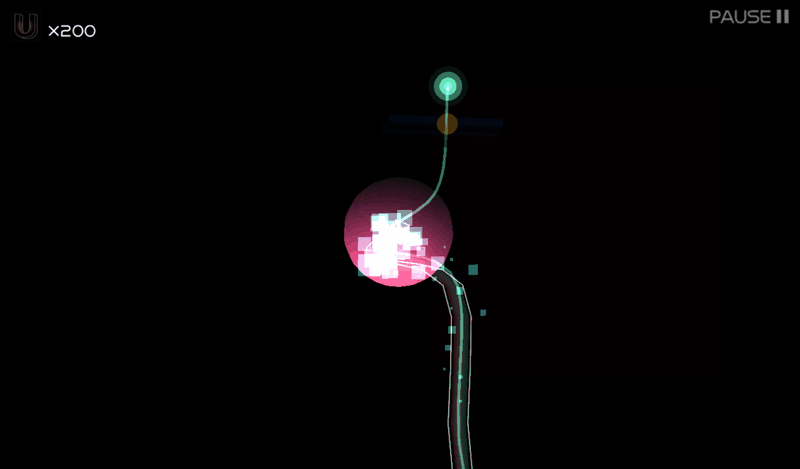 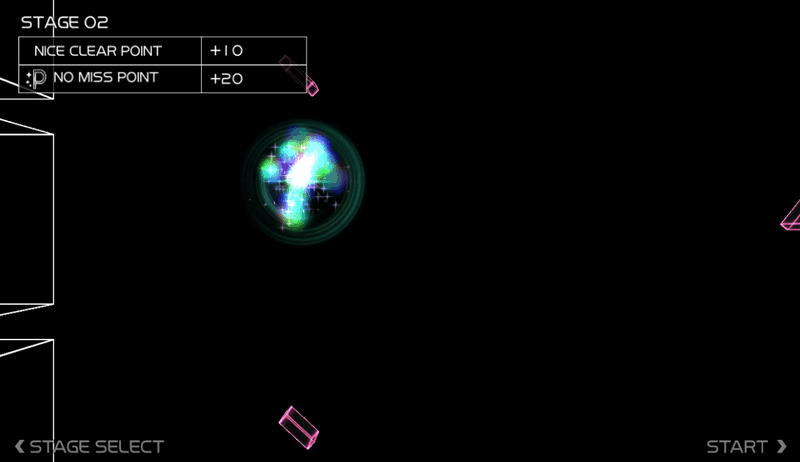 Despite a nag with the sometimes overly intrusive tutorial and a Retry button, which is hidden from view, mg_CUBE offers a good deal of fun, challenging twitch gameplay. Its design is beautiful; its music is both light and relaxing; its challenge is decent. Overall, the game offers a surprising depth and has a great potential, if the developers clear out a few rough edges we mentioned. In other words, if you are looking for a free, beautiful, refreshing, challenging and at the same time relaxing twitch game, try out mg_Cube.