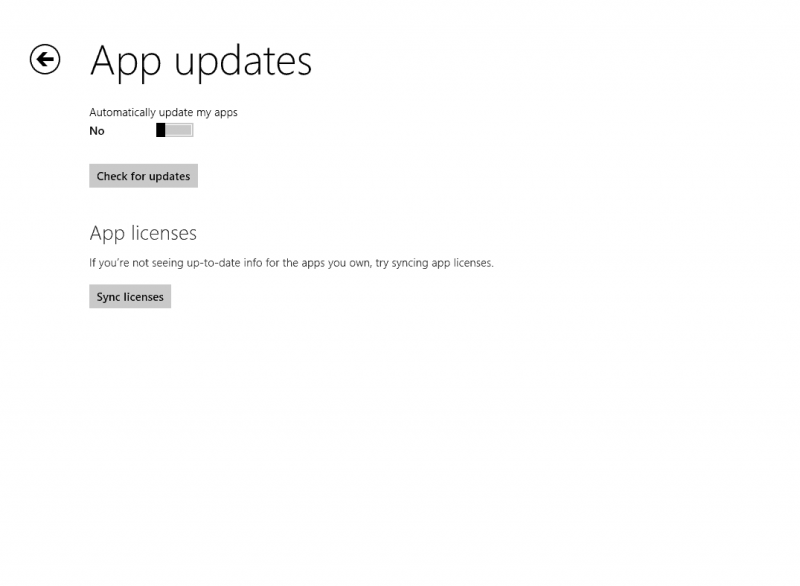 From all of the new iOS games this week, the one I wanted to try out first was Mikey Boots. Not only because it has a great name, but because I was very interested in the costume customization aspect of the game. I haven’t played either of the other two games in the series, but after my pleasant experience with Boots, I’ll likely be trying out the rest of the Mikey series. This is a really simple and fun game that appeals to all age groups and genres of gamers.

The first thing I noticed about Mikey Boots, was how smoothly it runs — both visually and mechanically. I never encountered any issues with lag, and this was extremely important given how little room for error there is in the later levels of the game. The levels looks really cool, and there are six different environments you can play on, which you’ll replay on different levels throughout the game. For the most part, every aspect of the game looks very polished and well-designed, even down to the numbers and icons at the top of your screen. 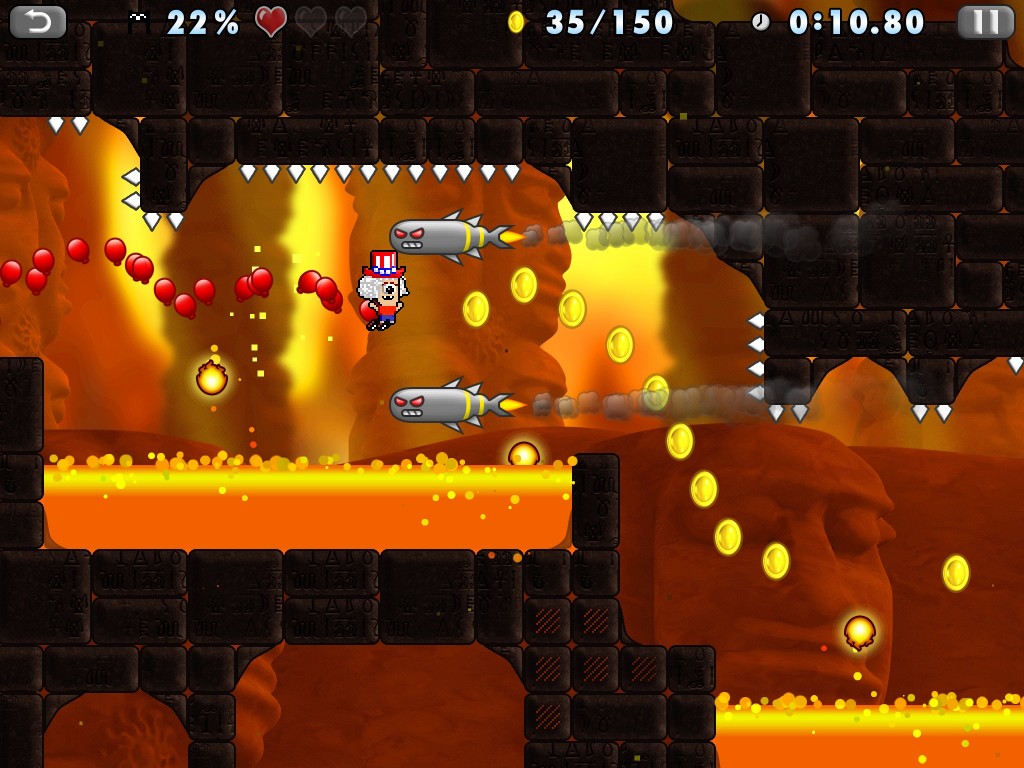 My favorite visual aspect of this game, was the extensive collection of costumes you could unlock and equip your character with. First of all, there is a male and female character you can play as, and then over 200 different items in the shop to try on. The majority of these are head items, but there is a fair share of different eyes, faces, and even boot trails you can customize. Honestly, there isn’t much not to like about Mikey Boots’ graphics, but it didn’t quite feel perfect to me — if there was one thing I’d nitpick it is that some of the textures and particles could use a bit more detail to merit perfection.

I’ve already covered the fact that it runs and plays smooth as silk, but I want to elaborate a bit more on that now. Mikey Boots gameplay is very precise, so it is extra important that there is never a frame rate stutter or visual glitch. At any given time you may need to dodge an incoming rocket, while avoiding a land mob, and at the same time making sure you collect all of the coins nearby. Since this game is essentially an auto runner, it becomes pretty difficult when there is so much going on. 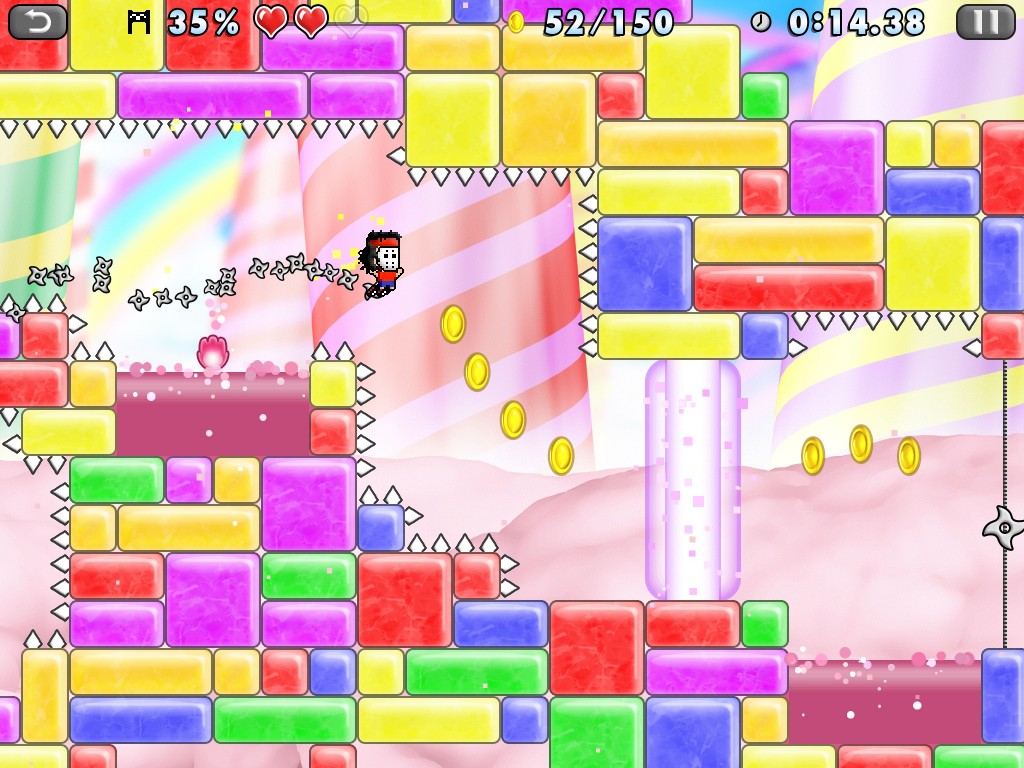 You can either run or fly, although it felt like 90% of the time it made a whole lot more sense to stay airborne then try running on the ground — although there are a couple of occasions where you need to run to make it through a tight spot. There are 150 coins on all of the regular levels (bonus levels are a bit different), and you get three lives until you fail. No checkpoints, even if the purple barriers may seem like it at first, they are just gates that are fun to break through.

The most important thing to aim for on any level, is the fastest time. Collecting coins is nice for buying new items, but not important when it comes to earning more stars. When you reach a certain number of stars, you can unlock bonus levels — plus, leader-boards are ranked by best times. If you aren’t going for the best time, you can try and find the hidden object in each level, which is a good reason to go back and re-play the game. 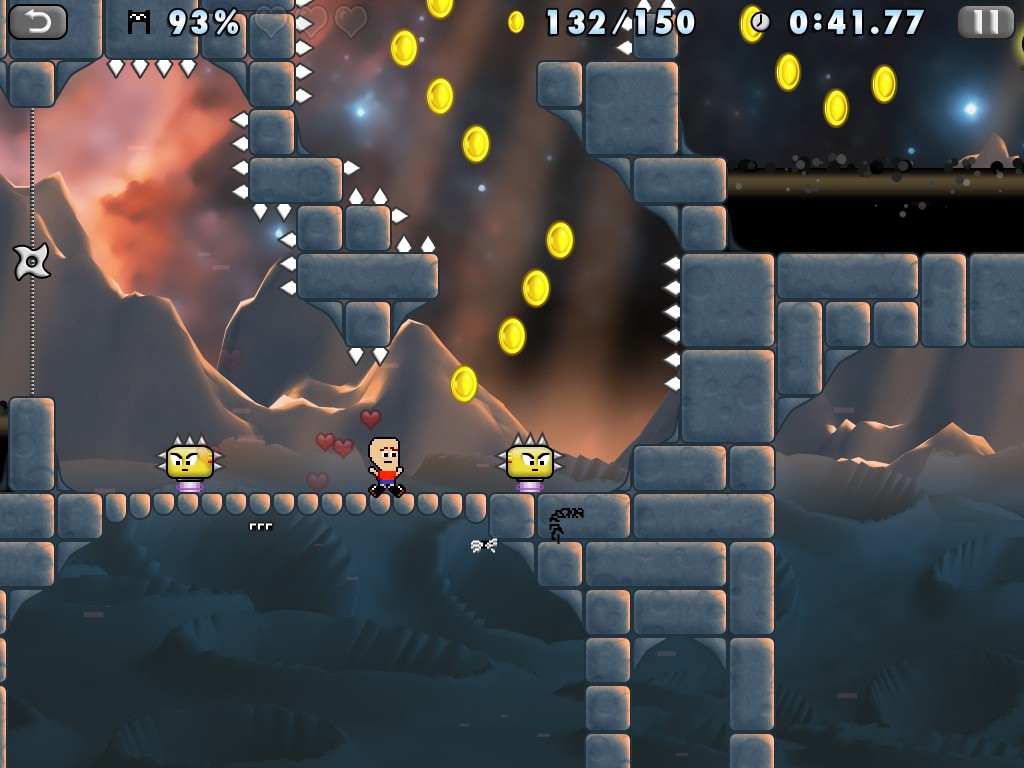 For me, although the game is quite enjoyable, I was left desiring something a bit more than chasing a line of coins. It seemed as though if you tried to just follow the coins, it would help you dodge any missiles or other projectiles on pretty much half of the levels. This got a little boring, but once I reached the level 20 range, it become more challenging and thus more entertaining. Still, even though it is incredibly fine-tuned, the Gameplay was a bit too basic to say it was fantastic overall.

First of all, the in-game Interface is phenomenal, and extremely well-organized. My favorite aspect is the quick replay button at the top-left corner of the screen — this is enough out of the way that there’s no need for a confirmation, so it allows you to quickly restart if you make an early mistake. You get a nice idea of how far you’ve progressed in any given level, from the % complete indicator, how many coins you’ve found vs how many are available, and how much time you’ve taken so far. The controls are very simple, just tap the left side of the screen to move backwards, and the right side to move forwards. Every tap you make also gives Mikey a little boost into the air, and successive taps give him an extra boost. It’s something you get the hang of pretty fast, but I felt the mechanic was very well executed compared to other games that have tried something different. 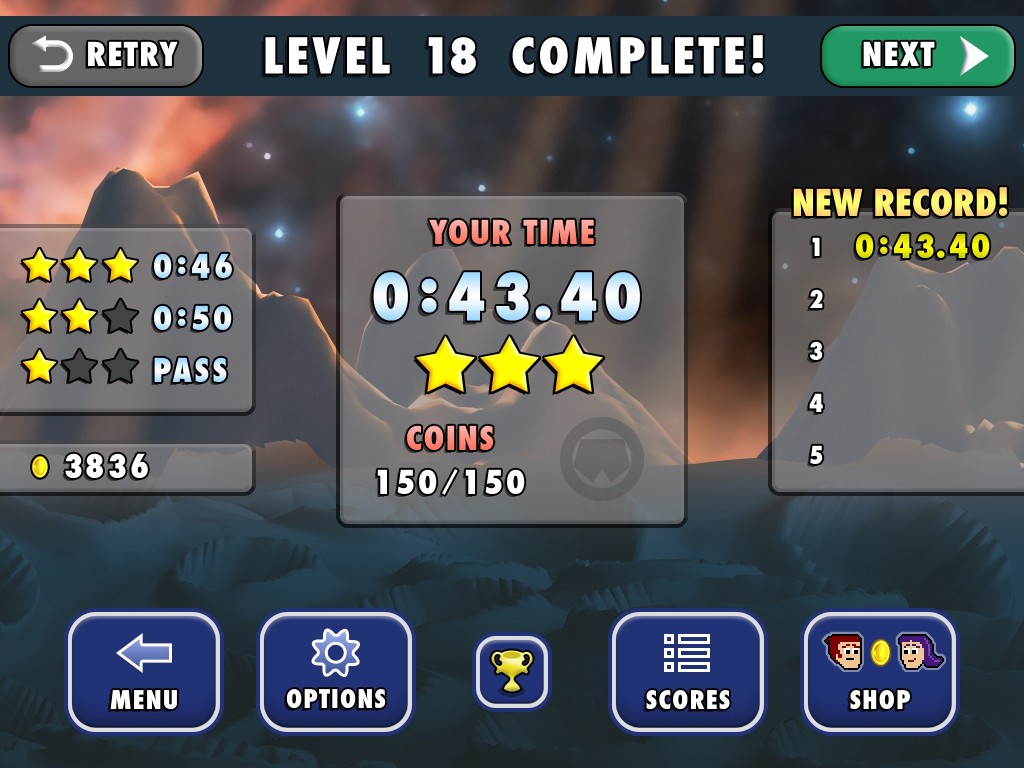 Mikey Boots’ menu interface is solid as well, and its very easy to navigate to any menu you want with just a couple of taps. The extensive amount of costumes is actually pretty well organized, as you have four categories with multiple pages of 10 items in each. If you want to look at your level progress, or see which levels you are missing stars on, you can see it all on one screen. Overall, the Interface was perfect in my experience.

Unfortunately, the Replay Value is going to get the lowest rating of my four categories. It’s not that Mikey Boots isn’t a game that you could still pick up and play a few months from now, but it isn’t really a game that you’re going to feel the desire to play all that frequently. Even though I was hooked on this game when I first started playing, and went through pretty much the entire campaign in one sitting, there isn’t quite enough to keep me coming back consistently. With that said, all of the customization and ways you can go back to perfect your progress, there is plenty to do and I don’t want to dis-credit that. 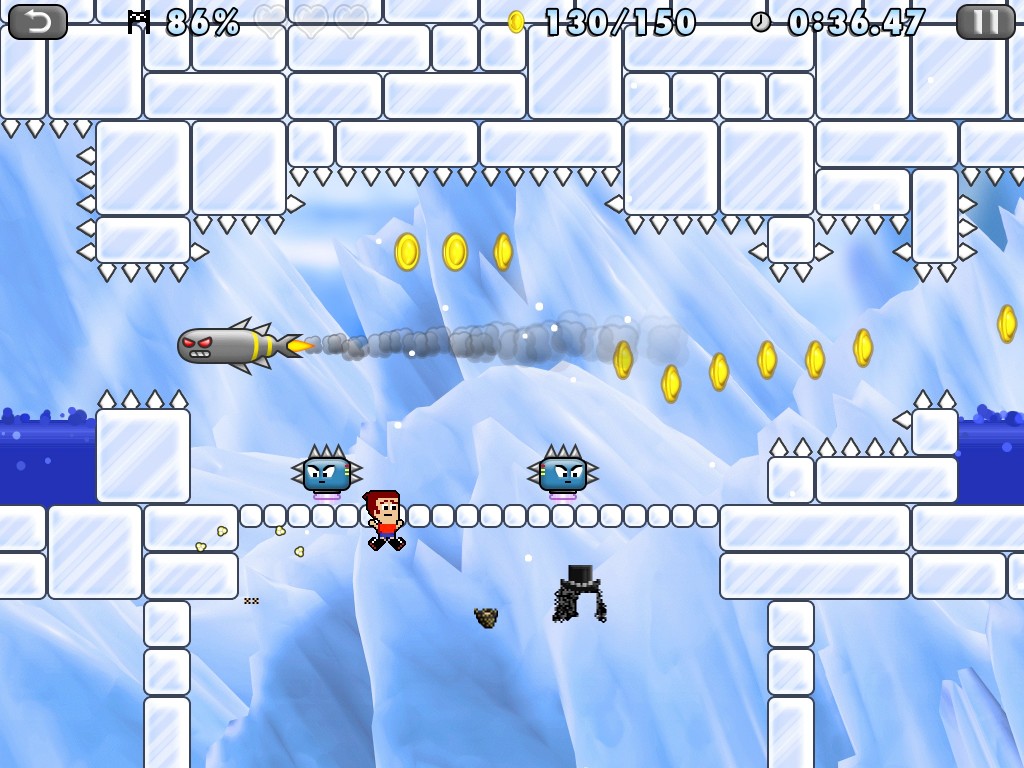 I don’t think any sort of power-ups or leveling system would be appropriate, but some sort of Endless mode might have been a nice addition to the 42 levels. Not that it won’t take you enough time to go back and get all of the hidden objects, three-star every level, and top as many leader-boards as possible — but not everyone will have the desire to do that, and an Endless mode may be more appealing. Regardless, this isn’t even a major issue and doesn’t hurt the game too much.

After briefly playing some of the other games I want to review this week, I’ve got a good feeling that Mikey Boots is going to be the best of the bunch. The 4.3/5 score could easily put it into my list of the top iOS games of September by the time this month is over. I highly recommend this one to any iOS gamer; it’s $2, no IAPs, and plenty of fun.

Click here to check out Mikey Boots on the Apple App Store!

Let us know your thoughts about the third installment of the Mikey series in the comments section below!