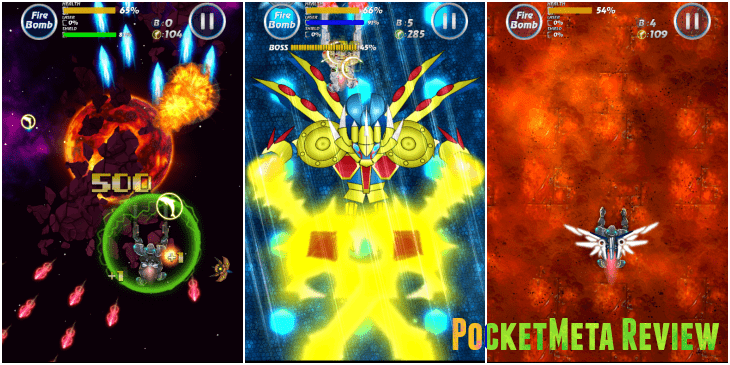 If I were to review this game in under ten words, I would put it like this – awesome, old-school bullet hell shooter done right. If that sounds like your cup of tea, head over to Google Play and try it for yourself – there is a free demo version and a full game for $1.69 with no in-app purchases and loads of shooting fun. If you are considering whether it’s worth a purchase, read on. 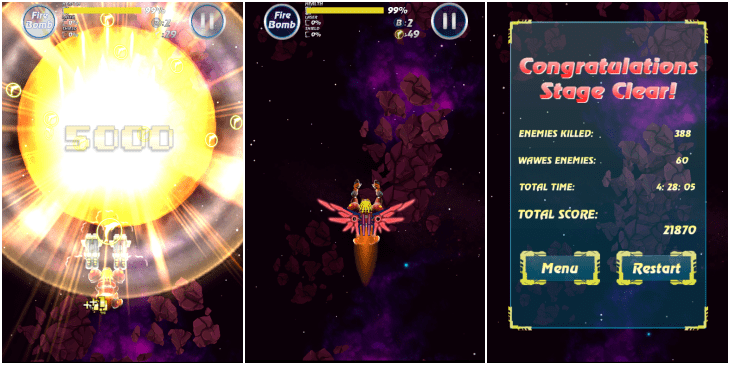 Even though bullet hell shooters don’t necessarily need a story, the developer adds a welcome page that dwells on the events that lead you where you are. It’s the usual alien invasion tale, where the creepy extraterrestrials prepare for a massive invasion on Earth from three constellations in a single powerful blow. Hence the name – Milky Way since all the three constellations are Libra, Lyra and Cygnus.

You have a choice of three so-called Mech that look like human-like military robots that can fly in space, withstand no-nonsense blasts and laser beams, and shoot the hell out of the aliens. You can choose only one at a time and take it through a series of alien offensive waves. 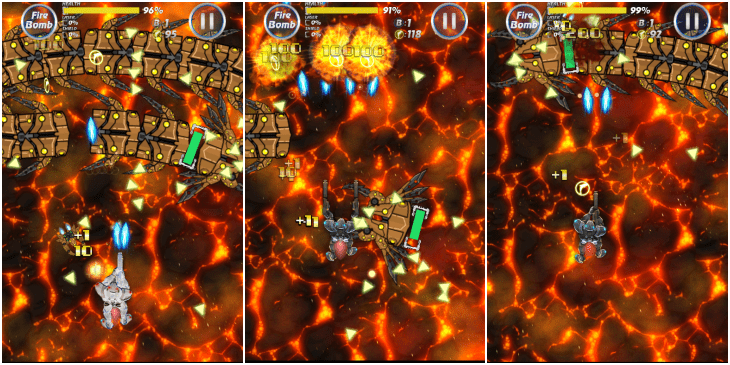 The gameplay itself is done by the book (if there was a book how to make a bullet hell shooter, I am sure this would have been it). You activate your Mech by tapping and holding on the screen, and so the Mech follows your finger. The weapon fires automatically.

You start with a basic weapon in each stage – there is no auto-save for all the upgrades you have earned in the previous levels. So, you zoom and swish around your enemies, which come in hordes from all the sides, and try to stay alive taking down as many as you can.

Each stage has two bosses – the midboss and the boss, both spectacularly scary. There are butterflies, spiders, scorpions, snakes, well all sorts of insects and even bosses that look like the stone man from the Fantastic Four. In other words, if the insects creep you out, you might feel a shiver down your spine once in a while. 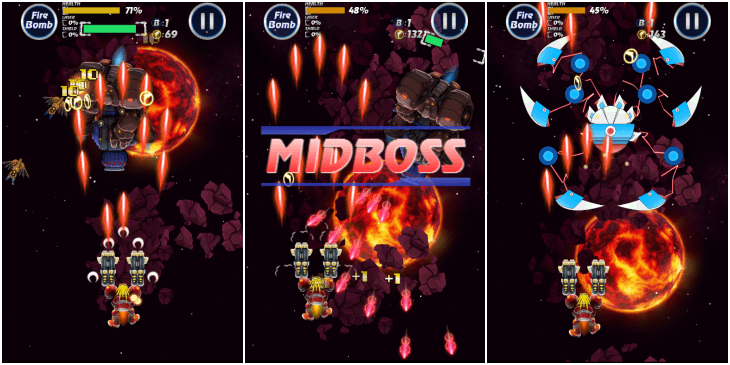 The game features three difficulty levels – Easy, Medium, Hard – you can choose in the Settings, along the sound and music volume. 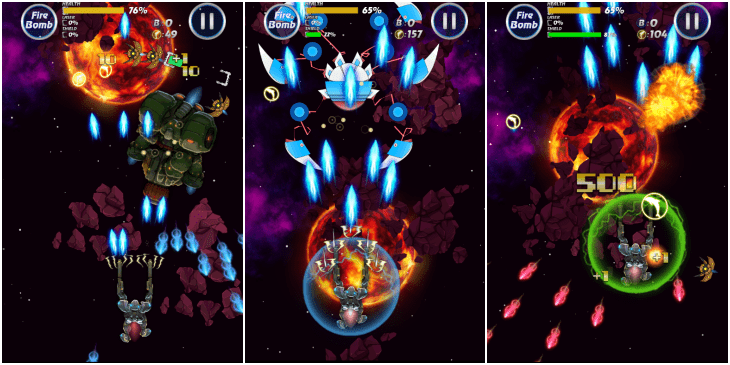 Considering the three difficulty levels, the 15 missions across the three constellations done by three different Mech amounts to a pretty decent gameplay. It is worth mentioning the game will appeal to the bullet hell shooter fans that appreciate the old school style and look of the games in the genre. It is fair the developers offer a free demo so that you can decide for yourself whether the game is worth the money. 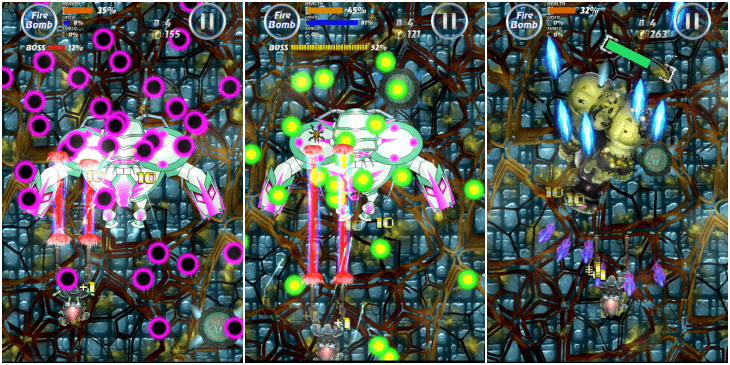 Talking about the money, it is a bliss some indie developers still release the games that aren’t ruined by IAPs. Buy the game once and play all you want. As far as I am concerned, I prefer the one-time premium purchase and the content worth the value, and Milky Way: Destroy the Menace is definitely worth investing in to support an indie developer. 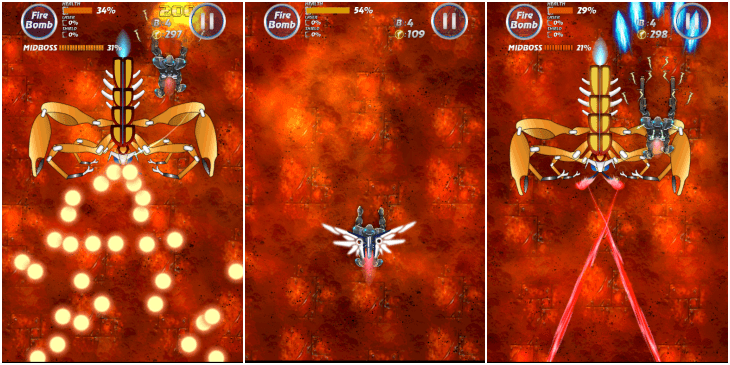 I am enjoying every single mission not only due to the frantic, crazy arcade action, but also due to the colorful blast each screen provides. The diversity of the 57 alien ships and 30 bosses paired with the different kinds of weapons and the visual effects they create makes for an awesome spectacle. So, it’s 2D, but it’s a wonderfully done 2D that plays quite well with the gameplay. Overall, I am digging the visual style of the game. 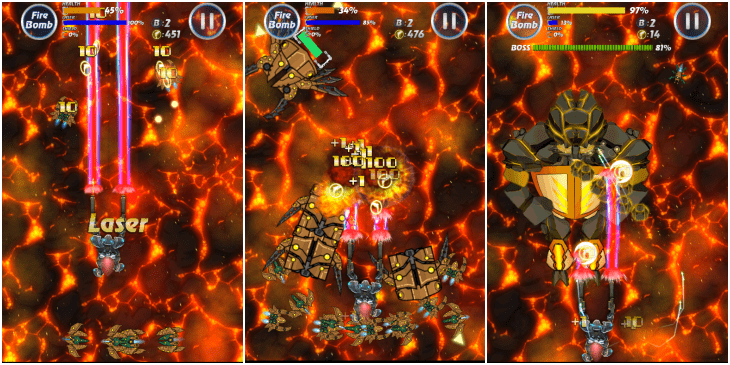 Oh, and once the Mech clears a stage, it unwraps a pair of gigantic wings and soar to the next challenge like that Archangel Gabriel from the Dominion (yes, 2 days till Season 2 premiere left).

The game features 7 original soundtracks that go with the action and complement the overall space-y atmosphere. 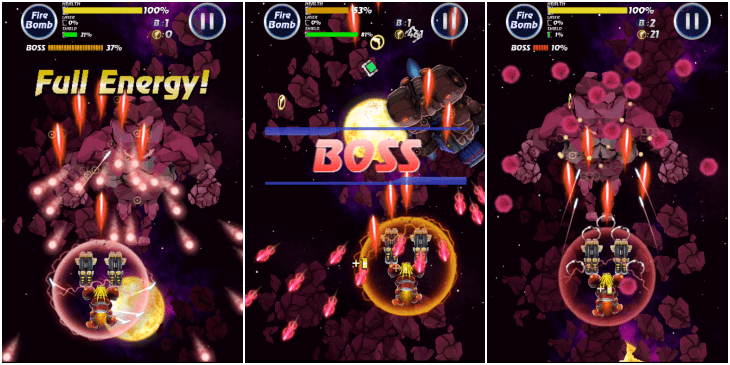 Once you start taking down your opposition, you will see them die and turn into gold coins that look like that Mockingjay emblem from the Hunger Games – collect those by approaching them. The visual effect of your Mech literally vacuuming them from the space is nifty. Then, you will see some power-ups pop up in the battlefield – collect those as soon as you can. Since you have a life bar, a laser bar and a shield bar, you will be able to harvest these bubbles in the space. 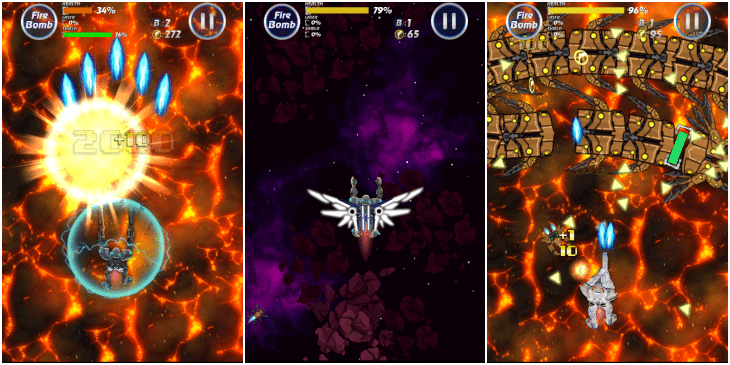 A shield won’t last forever, and as far as I can tell it will deplete irrespective of whether you get shot, or not. It looks like it’s time-based and protects you for a limited time. Makes sure to blast as much of the boss force as you can within that time.

Laser weapon is also a power-up you get to fish in the space waters, but when it’s on, it looks dazzling and does decent damage to the enemy.

The HP bubble will add you health while the B bubble gives you a special bomb that gets activated by a Bomb button in the upper left corner. The latter eliminates all enemies on screen at the moment. It’s a good idea to challenge yourself to never use it in the easy mode. 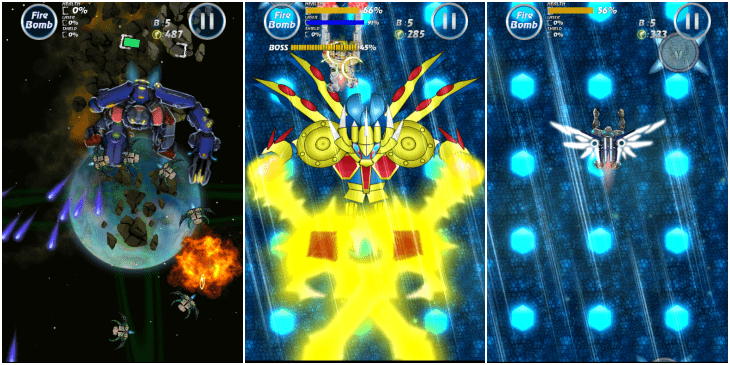 The game plays without an Internet connection and it’s delight to be able to tap into while on the go. It is also designed with a wide range of Android devices in mind, so even if you sport Android 3.0 you should be able to play it.

There is only one nag that I’ve encountered – a game starts lagging when I choose the red Mech, the one in the middle. It looks like a fluctuating bug, though. 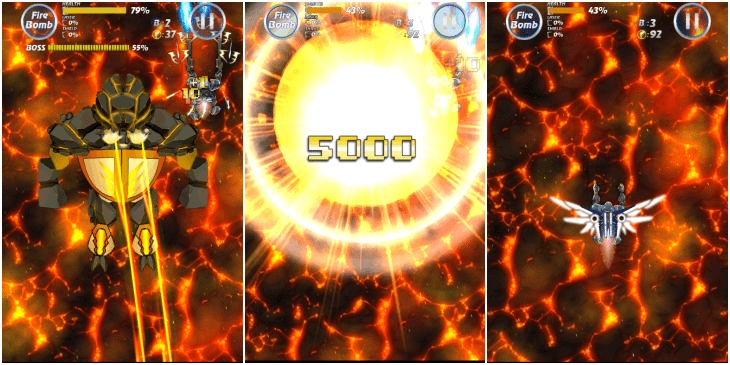 Milky Way: Destroy the Menace is a wonderful old-school bullet hell shooter for the fans of the genre. It offers enough difficulty modes, playable characters and levels to make for an excellent replay value. It plays offline, has no IAPs, comes with a playable demo and is compatible with a wide range of Android devices. Thank goodness the indie developers still make these games despite the overwhelming dominance of the freemium titles. It is slated for an iOS release sometime soon, according to the developer website.

If you read our list of top space shooters and space sims, you have probably exhausted all of them by now, and Milky Way is the next candidate to keep your eyes popping out of their sockets in the hectic color blasting arcade game. We recommend it to the bullet hell shooter connoisseurs.