Mini Motor Racing WRT, or World Racing Tournament, is a sequel to the much loved Mini Motor Racing by Binary Mill, a 2012 winner of Best Casual Game on the App Store. The sequel takes some of the original’s elements, adds up a ton of new perks and loads of visual polish, makes it a freemium instead of the original’s premium, and expects to receive tons of attraction. Any Mini Motor Racing fan will anticipate a game that is ten times as good as the original while the newcomers to the series will appreciate the visual presentation of the screenshots and the trailers.

Just like them, I was looking forward to a fun racing game and I so much wanted to rate the game 5 stars, but unfortunately, Mini Motor Racing WRT holds a formidable amount of small nags that amount to a huge pile of irritation. Let us see why. 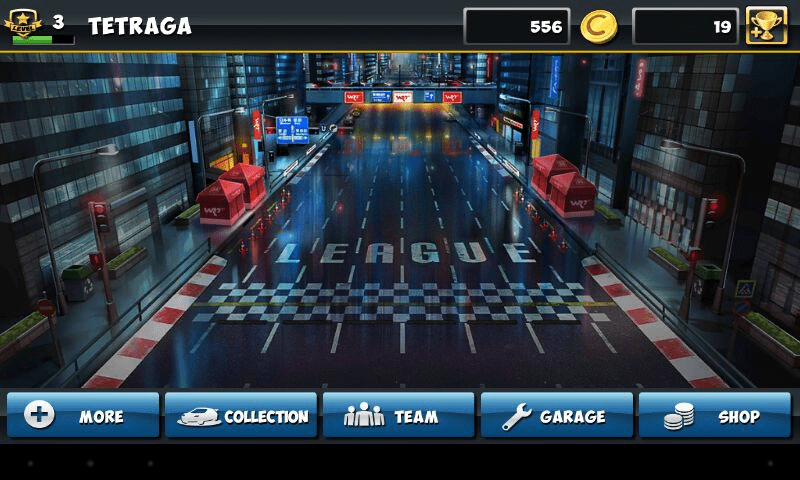 I wish I could say Mini Motor Racing WRT is all about racing, but it would be true only partially. When I look for a racing game, all I want to do is race. This game, however, gives you many ways to race, but a lot more ways to distract from the very racing.

There are several modes to race – a single-player career mode, league, challenges, club events and race club. By default, only the career mode is unlocked, and you play earning XP points and leveling up to unlock the other modes. The league racing gets unlocked as you reach level 5, Race Club – level 7, Challenges some time around level 4. 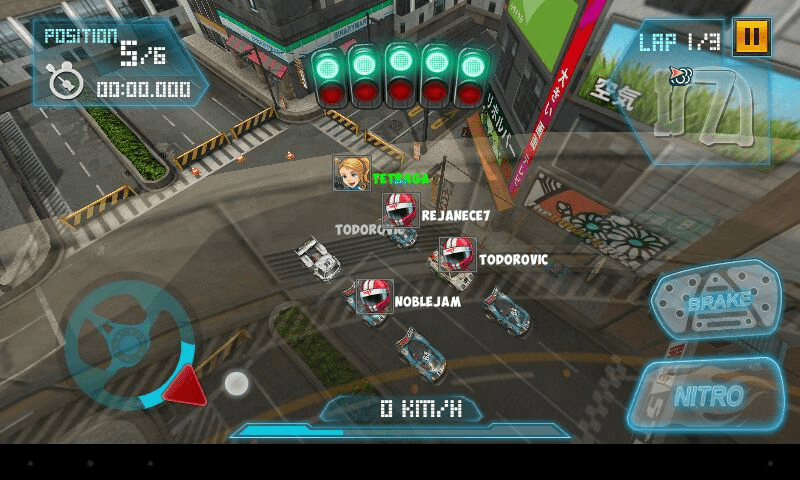 To get to the actual race, you will have to go through a series of confusing, repetitive, and utterly boring must-do windows. First off, there is a ton of cars to unlock, buy, customize, tune and upgrade. This is supposed to be a fun process, but it’s more of a confusing and tedious one. Each race needs a particular car to suit the road type and the weather conditions. So, before you get to the race, you need to choose the car, upgrade or customize it, and then wait through the loading screens to start the race. Lose a race and want to retry – go through the same screens and loading times over again. At best, you might be waiting for at least 20 seconds in between the re-tries. If you should wish to upgrade the car and buy some parts, expect to tap through the same windows trying to figure out how the things are supposed to work. 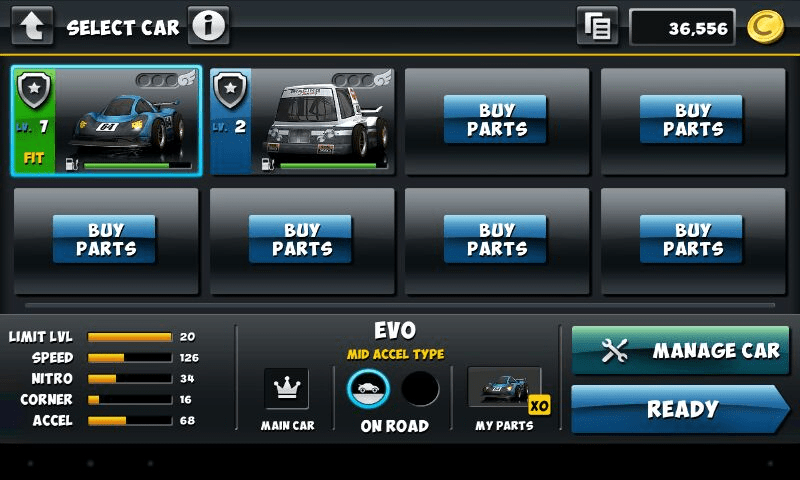 The spare parts purchase part gets further confused by the amount of in-game currencies – gold coins, coupons, clover leaves, to name a few. And only a small amount of parts gets available for the coins while the rest is only accessible for the coupons and clover leaves. I have done the procedure several times now and I am still not sure if I am doing it right. You can scrap the cars for the spare parts, or you can build a vehicle, but here is the catch. Whenever you purchase spare parts to upgrade your cars, you basically play a stupid version of Russian roulette – you pay your money, coupons, coins, whatever and wait a random part to get generated by the mysterious algorithm behind the curtains. Imagine walking into a car repairs shop, cashing out a bag of money and saying – give me whatever you have. No fun.

So, by the time you get to the race, you’ll have spent some ten minutes going through all that tedious garage roll. The race itself is quite short, and is either fun, or a torture, depending on how you like the controls. 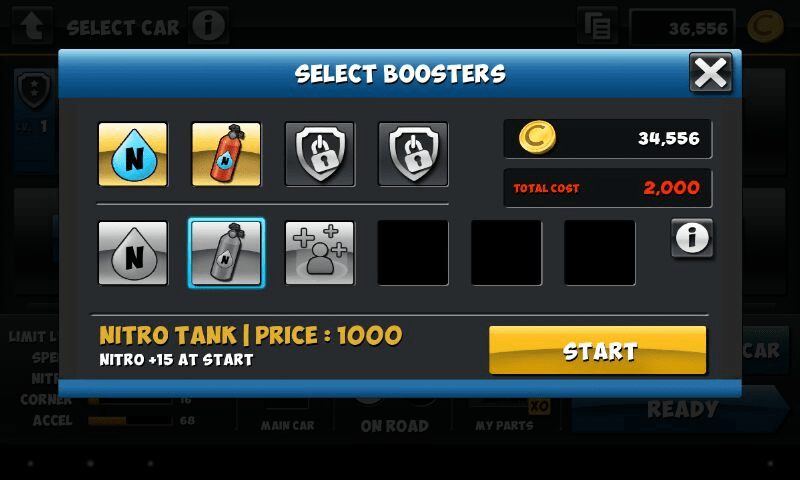 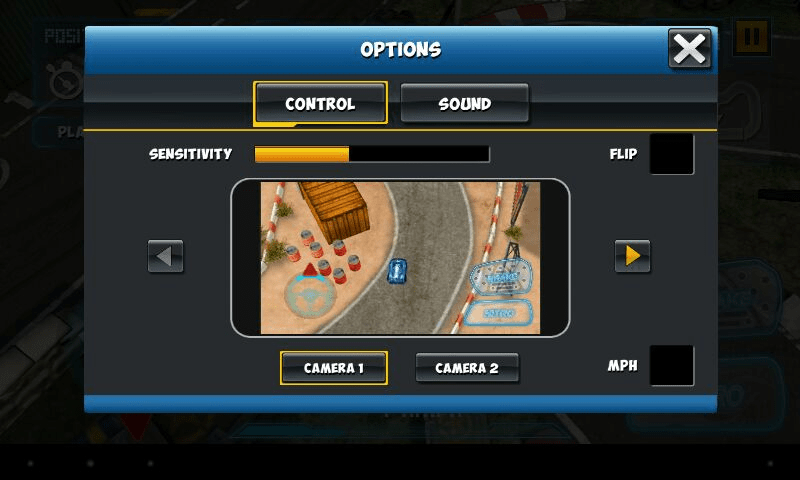 Now, I don’t give up so easily, so I switched the camera view. There are two options – top-down view and third-person like, from behind the car itself. As hard as I tried to get used to the racing, I couldn’t quite enjoy it.

I realize there are hundreds of users who are quite good at controlling the cars using the available options, but I also see quite a few reviews expressing the same exasperation I am feeling. The tracks are wonderfully curved, but also stuffed with all sorts of objects your car gets stuck in, or bumps into, so a single wrong move, or an extra split-second you push on the turn button and you are screwed.

Here comes another interesting peculiarity I’ve experienced – if you manage to gain leadership right from the start, and don’t make any rough mistakes, you end up winning. If you start 6th, like in the Challenges mode, you pretty much end up among the last. There are power-ups you can buy before each race, including the opportunity to be the first in line in multiplayer events, but in the long run, they turn out to be pretty expensive, especially if you play without spending real cash. 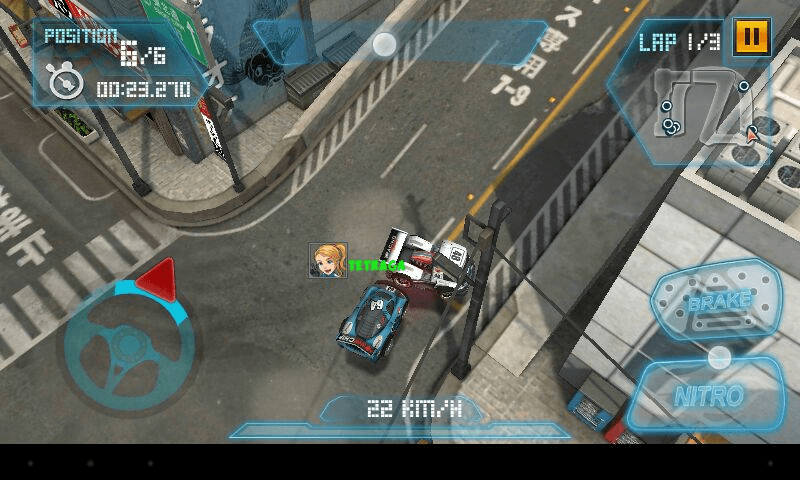 Now, the game is rich in additional content. First of all, there are a lot of cool cars, including the real brands like Kia and Nissan. Overall, there are three kinds of vehicles you can have / unlock / buy – WRT, Choro Q, Kia. Some of the high tier vehicles are premium-only. It would have been great if it weren’t for the confusing upgrade process. 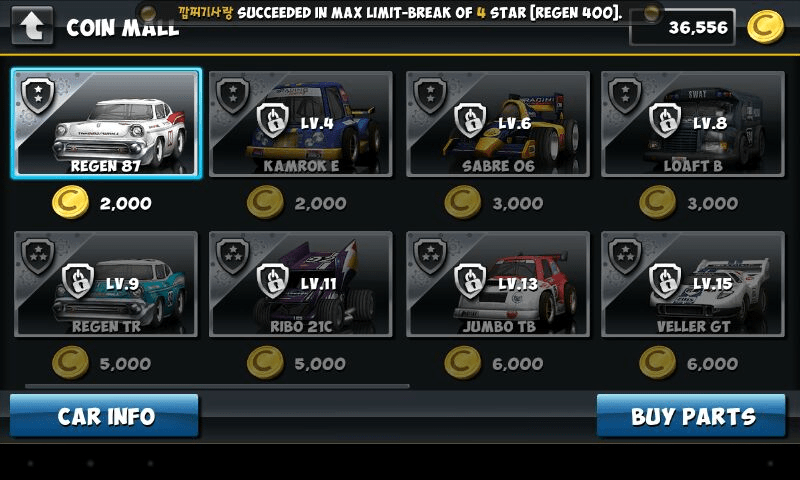 Another feature that beats me is the achievements. As is typical of many games, you have missions here, like win a race, upgrade a car, purchase a set of spare parts, scrap a car, etc. When you complete them, you get rewards, such as coins, trophies, gasoline. For some inexplicable reason, these achievements don’t just add up to your respective stats when you earn them, but go to the Achievements Inbox instead. So, you don’t have them unless you specifically go there and claim them, one by one, and there are several tabs – general, races, upgrades, and more. You need to claim every single one of them manually – there is not even a button to claim them all at once. Why on Earth it’s like this I have no idea, except to take the player’s time and distract from the races. 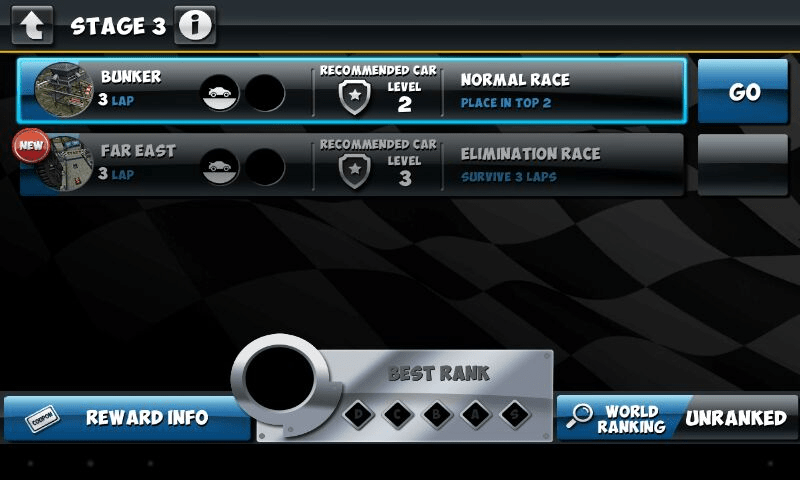 There are other things that are designed to take your attention away from the races. First, you need to mind your gas levels, and they are not always easy to keep your eyes on simply due to the sheer amount of the things there are on the screen. For some reason, the game keeps spamming you with the notifications when other players earn rewards, or upgrade their vehicles. Those notifications appear regularly at the top of the screen, and sometimes are quite distracting – if anything, I don’t see why they should take the screen real estate and my bandwidth.

When you run out of gas, you get locked out of racing on a particular vehicle, abut you can go look in other sections, like a challenge or take a previously completed track where you race with a different car. Of course, if nothing else helps, you can buy gas, as much as lot of other things – car parts, upgrades, cars. 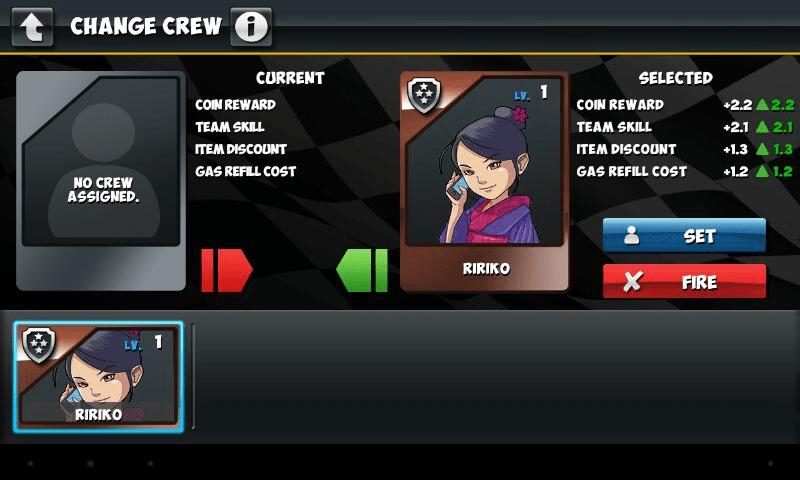 The game has several in-game currencies – trophies, coins, clovers, diamonds, coupons, keys… Trophies are the hardest to come by, well maybe clovers are, but the point is once you start buying there is no ending. If you are an addictive personality and a compulsive buyer, you might very well spend a good deal of cash on in-game purchases here.

At first, when you are still not sure which currency is the rarest, it is easy to spend it on something you can’t even use – like a 4-star team manager while your driver is still 1-star, and you can’t even use that manager until you’ve reached a certain level. Another confusing part is the team management – you can’t just buy a member you need right now, it’s all random again – as with the spare parts. You press “scout”and the game generates a random team member – take it or leave it, you have to pay in trophies. 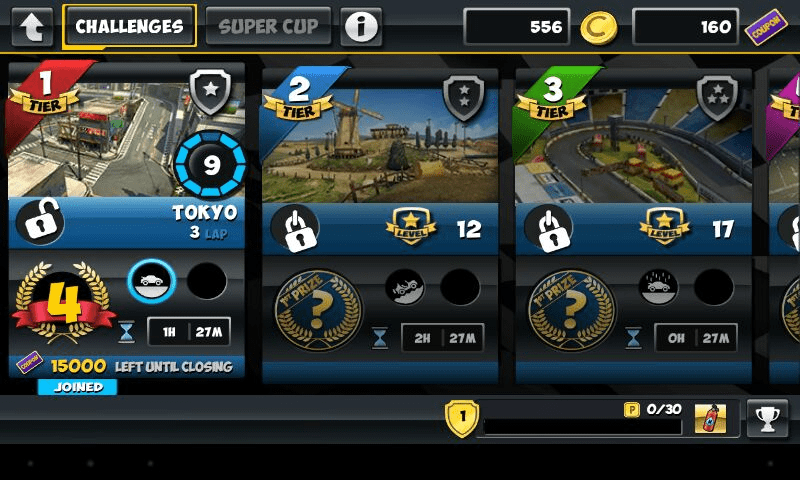 If there is one thing that I have no complaints about it is the design of Mini Motor Racing WRT. The mini cars are wonderfully detailed while the tracks are dead gorgeous – tunnels, beaches, cities, night and day, sun and rain – it all looks spectacular and colorful. The music is spot on, but at some point I preferred to lower the volume due to it being somewhat repetitive. Overall, the design is one thing that makes up for the shortcomings of the other departments. 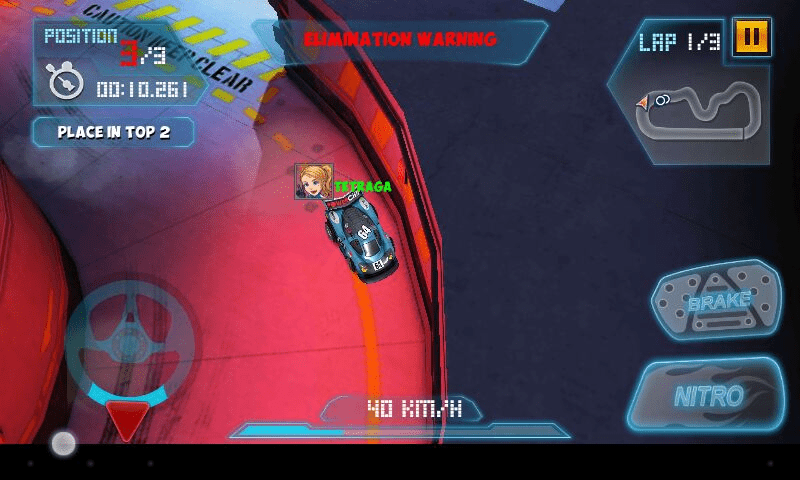 If you like the controls and don’t mind the IAP restrictions, the counter-intuitive UI and the necessity to go through tons of windows just to get to those racing green lights once in a while, you will find plenty of things to do that make for an excellent replay value. The league, the club races and all that team management with a rich career mode offer weeks of replay value. 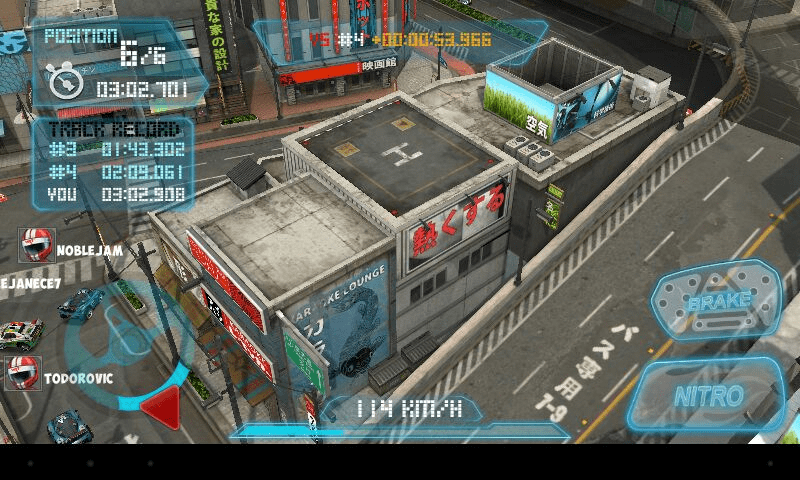 I found loading times to be slightly annoying. It is one thing when you need to wait till the game downloads a new track, and it does it once per track, so quite often. Eventually, the game occupies several times more its original allocated storage. But it’s another thing when you need to wait in between every single screen of the UI, and since you have to go through many of them just to replay a bad race, the loading times add up to the disappointment. The need to be always online makes it unplayable for the times you’re on the go. 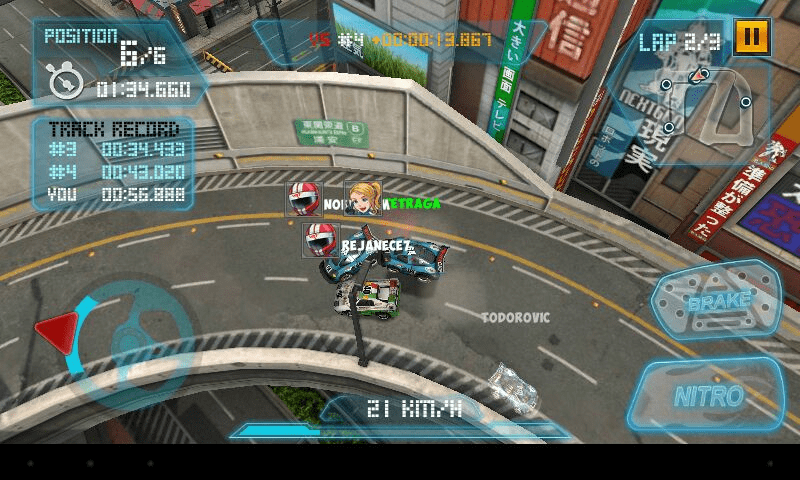 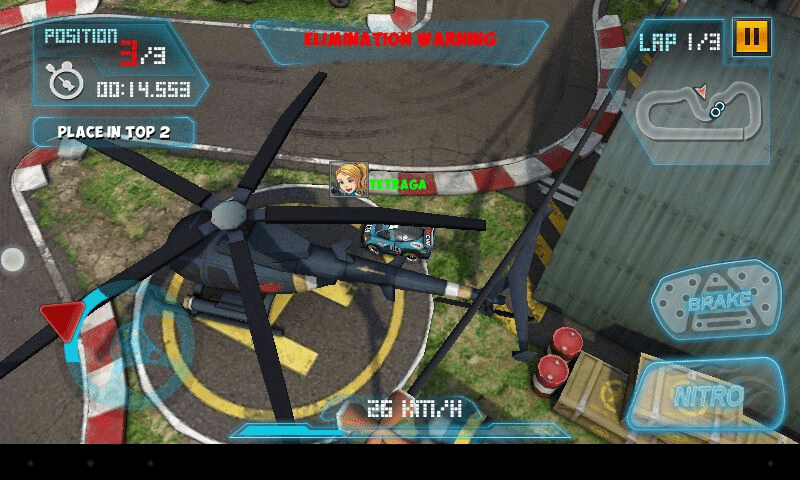 By now you might have guessed I am not particularly fond of Mini Motor Racing WRT. I want to love it, and there are a lot of good things done right about the game, but a surprising number of things are plain aggravating, including such crucial parts as the controls, loading times and the times between the race replays. When I play a racing game, I want to spend 90% of the gameplay time racing, not doing all the other things this games makes you do. By the time I’ve unlocked the league, I’ve lost interest in it altogether. I am sure many users who are better with this type of controls are quite enjoying the game, so I can’t say a decisive “no go” for this game. It is a remarkable entry in the racing genre, a beautiful and content-loaded one, polished and heavyweight. It’s definitely worth trying just to see if it’s your cup of tea.