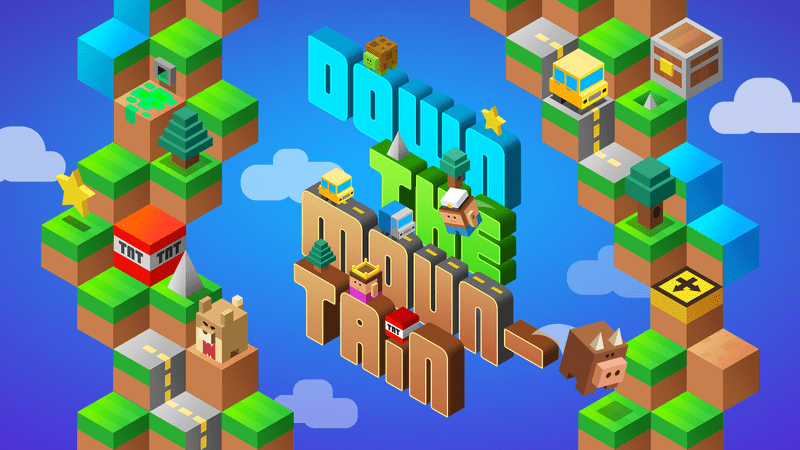 What is wrong with the mountains these days? One can no longer feel safe while mountaineering, eh? Last week, Mountain Goat Mountain saw you climbing an endless mountain full of hazards, and this week Down the Mountain sends you on an endless ascension into pain and doom. There are a lot of ways to die here… and we totally love it!

If it looks like Crossy Road, it’s because it takes a lot of its looks and some basic moves, but the similarity is superficial, and in fact DTM is more similar to Zynga’s Mountain Goat Mountain, indeed.

You control a blocky character jumping down the blocky mountain – left and right. You can’t jump up, you can’t go back. The blocks behind you are crumbling down.

The blocks ahead of you are filled with traps – lava blocks burn you right away, sandy blocks deteriorate quickly so you need to jump twice as fast, waterfalls swish you down before you can jump off, cracked tiles fall the moment you tread on them… But that’s not all! The mountain is inhabited by the crazy mountain wolves and reckless drivers, so getting hit by a car or eaten by a beast is as likely an option as getting poisoned by some toxic ooze.

Besides the spikes and TNT boxes, there might be an occasional key dropped somewhere on the grid, and if you pick up that, make sure to keep an eye open for a chest sometime later. Opening a chest may grant you a new character.

The chest is not the only way to unlock new characters, and the latter are one of the main draws of the game. There are 60 unlockable characters, all wonderfully blocky and cutesy-adorable from the default porky to the ladybug Adelaide, Kim Kardashian and the sailor in the white cap. You unlock them gradually as you complete missions.

At first, it takes completing five missions to unlock a new character; later on – 10 missions. There are 200 missions overall, but you can skip them once in a while by paying in stars you collect on the mountain. The missions are nothing tricky – jump on a chewing gum, or jump on 5 water blocks and the like. In most cases, you will have already done that by the time you get to a specific mission.

Another way of unlocking a new character is spinning the wheel of fortune, which you can do once in six hours. The wheel also has some free stars in various amounts, and that’s what I am getting all the time.

The game counts points according to the number of tiles you have jumped before you die, keeps your high score and even shows you the average score for today. You can share your results via social networks and see where you are on the global leaderboard.

What first seemed like a laid-back time killer is indeed a time-killer, but quite a frantic and frustrating one at times. You are dying a lot, and frankly speaking, the success is 50% your quick wits and good hand-eye coordination and 50% dumb luck. More often than not the layout ahead of you is nothing but TNT blocks and spikes – not a single regular tile to jump on and wait a second for the spike to get down for another split second. It’s infuriating, but also quite challenging and addicting.

The game does require a lot of concentration and quick reaction, so if you want to move beyond 100 tiles – look ahead and try to plan, as hard as it seems.

That said, the term “casual” is written all over this game, and it is accessible to the youngest players, too. After all, quick reflexes is a matter of nature, not only skill, and your kids may outplay you in this type of game.

On the flip side, the layouts don’t seem to be randomly generated, but each character has a different layout, which alters lightly.

The controls are dead simple – tap left to jump left, tap the right side of the screen to jump right. You can even long-press either side of the screen to keep jumping down the same direction. It is irritating at times that you can not jump up, or jump down but straight, as you can in the Mountain Goat Mountain. This limitation imposes a great challenge in avoiding the obstacles, but that’s the ultimate purpose of the game – make you fail and come back for a better result.

I do have an issue with the lag here. As I watch the gameplay videos on youtube, I see my piglet does not move as swift as it does in the video. I’ve also come across the similar reports of the lag, and I think this might be a widespread issue. There does seem to be a slightly noticeable lag that makes the character move slower, as if under water or through glue. At times, the taps won’t register, which would make me tap twice, and then boom – they all get registered with a delay and my blocky character falls for its untimely death.

It’s a fun game, but the lag is noticeable and sometimes affects the experience.

Another bug is the video ad that you are supposed to be able to watch for another free spin at the wheel of fortune – I’ve watched them ads, and they never grant me the free spin.

The simplicity is delightful in every item on-screen – the colors, the characters, the mountain blocks and even the backgrounds. Everything about this game is cute, even the desperate dying sounds the block makes after it’s inhaled the poison and runs for the antidote.

Down the Mountain is a highly addicting time killer, there is no denying that. Until the novelty of unlocking the new characters and digging the cute design is fresh, you will be replaying it quite a lot. If you’ve played a lot of these games lately (Crossy Road, Mountain Goat Mountain) you might feel the novelty wading sooner than usual, however.

There is one $0.99 IAP that removes the ads. You can also buy the keys to unlocks the mystery chests. 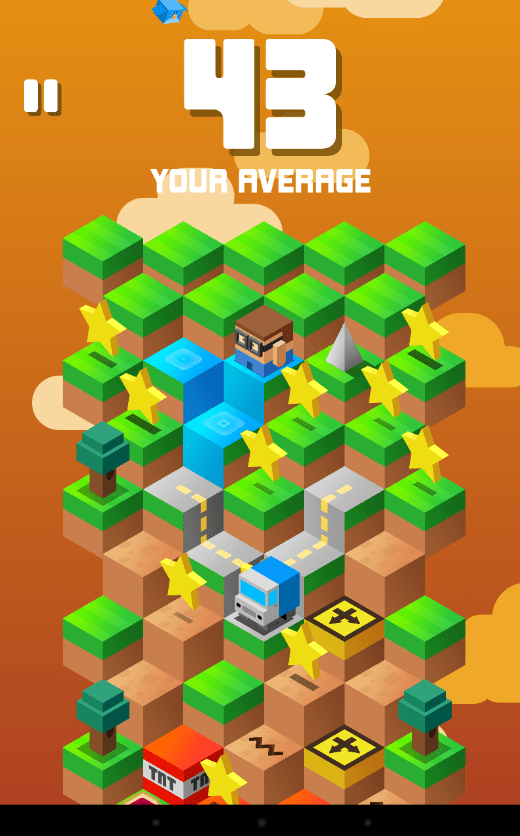 Down The Mountain is a sweet time killer, frantic and challenging despite its cutesy graphics. The game is quite addicting and while the fresh design, funny characters and the “one more try” hook keep you coming back for more, you are sure to enjoy this endless ascension into this merciless block-y maze. 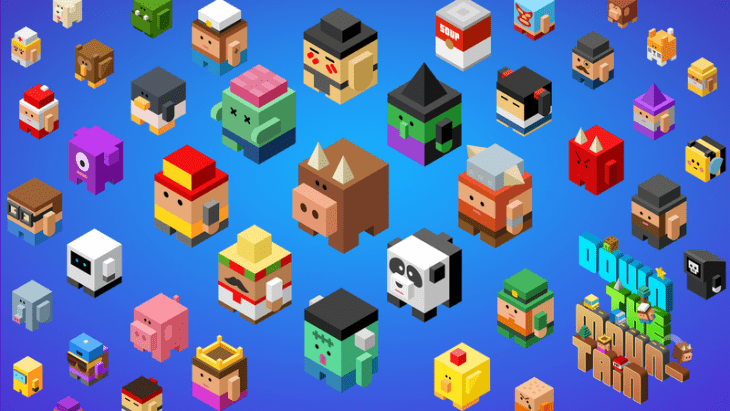