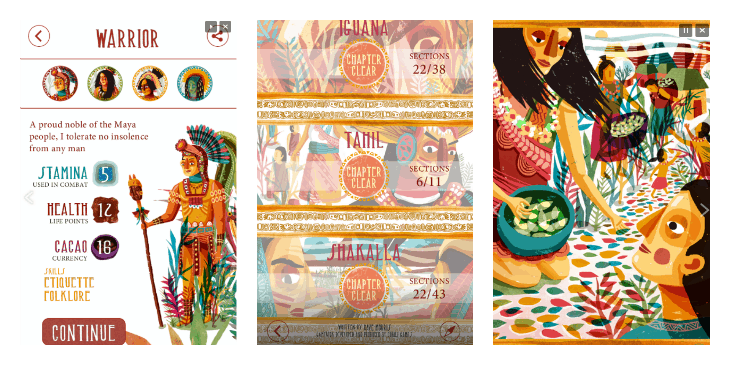 I have reviewed a gamebook by Cubus Games before – Heavy Metal Thunder – and when I heard of their next release I knew I had to play it. Without further ado, Necklace of Skulls is yet another success from the Spanish studio, and here is my breakdown of all the reasons why.

First of all, just like Heavy Metal Thunder, Necklace of Skulls is a book, so expect to spend most of your gameplay time reading. Yet, it manages to create the atmosphere of tension, anxiety, mystery and intense action. As you read through the pages, you are presented with an occasional choice of items to carry or use, or decisions to make. Each adventure you undertake in the Necklace of Skulls is very different from the other, and it struck me the first time I re-played, and it still keeps striking me now that I lost count of the times I am re-playing.

You play as a member of Mayan tribe, and your twin brother disappears during a diplomatic mission to a Big City. You saw his skull in your nightmare, so the news does not take you by surprise. However, you also have this innate ability to connect with your brother, which is why you still have a tiny speck of hope you can bring him back. With that, and a few items in your backpack, you set out on a journey full of adventure, discovery and sinister epos of Northern America before Columbus set his Inquisitor’s (pardon, missionary) foot on this blessed land.

You will talk to ghosts, witness human sacrifice, fight four headed hydra, descend into the land of the dead, walk through the guts of a giant dragon (and try to exit from his butt), meet sorcerers, wizards, immortal giants, cannibals, snakes and spiders, and this is only a tiny fraction of the book’s contents.

Your brother perished victim to a dark wizard Necklace of Skulls who rules werewolves and other sorts of supernatural creeps, and you have little chance for success, unless you use all your wits and luck. 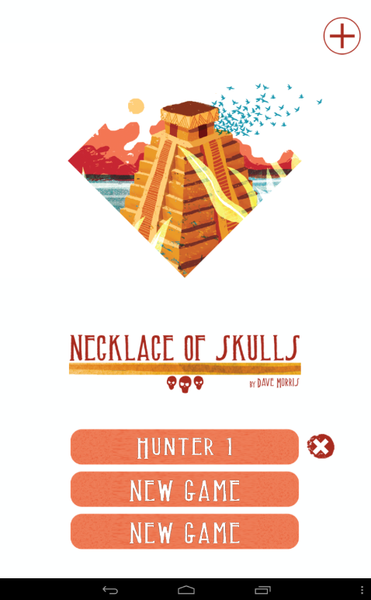 You have the choice of four characters to be your protagonist – warrior, huntress, wayfarer or sorceress. Each character has their own stats in abilities and the number of items they can carry. I am a stubborn kind, so I stick with the warrior, replaying his path multiple times until I succeed. However, the game lets you play up to three characters in three different paths, with auto-saving progress in each path.

Yet, I am dying and rewinding the story of this one noble warrior whose skills don’t do him many favors – etiquette and folklore got me out of some situations, but left me helpless in others.

The game has checkpoints you can go back to and re-start the game from that point, instead of re-starting from zero.

That said, it is literally impossible to predict which items you are going to need the first time you play. A skin sack of water seems logical, and my gut feeling told me I would need those chili peppers, but I did not need them until the next re-play when I chose not to have them. Oh, biscuits…

The items you can carry are limited by peculiarities of your character, and so are the abilities. Notably, here you do not change or evolve your character’s abilities – they are the ones available by default, and you can’t change them, or add more abilities, or evolve existing ones.

As for the items, their limit can become a real headache and the main reason you may choose to rewind the gameplay.

Along the way, you also unlock keywords and hints, and those are stored in your Journal, so you can always check them there. The game automatically shows you if you have the specific keyword for a particular situation.

So far, I have encountered only one situation where I engaged in battle directly – against the hydra, but I can see there are also Cannibals and potentially many other battle encounters. The battle system eliminates dice that so many players have come to detest for the great role luck plays in dice throwing. Here, you have three moves per round, and a choice between Attack, Defend and Rest. Your moves are limited by your Stamina, which is something like 3 out of 6 as you begin, but that might depend on your character. So, Attack will cost you 2 stamina, while Rest will give you 2 stamina and Defend will give you 1 stamina. The battle comprises several rounds, and as hard as I tried, I could not beat hydra, but again, it might be the case my warrior was never meant to beat it. 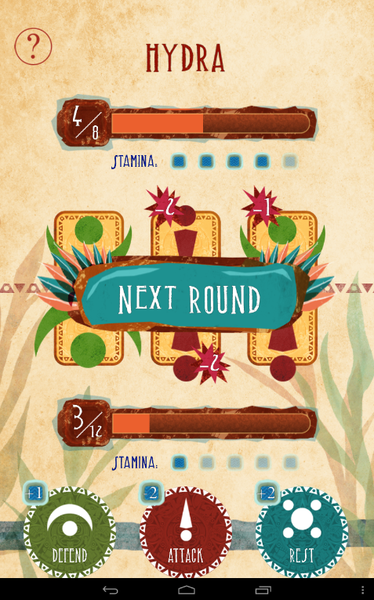 Unfortunately, the game closed down on me a few times, and I am not sure if it’s that glitch that caused me lose some of my items and keywords. I am sure I had two sacks of water before I set off to the desert, and I am sure I had the keyword ANGEL unlocked some time before I reached the city of Necklace of Skulls, but by the time I needed to use those, the game neither offered, nor could I find them in my inventory.

Other than that, everything about the game’s UI is simple, user-friendly and intuitive. You have the back pack with the items you collected, and fortunately you can have more than one of the same item. You have the Journal, where your keywords and hints are saved; and then there is the Checkpoint tracker, which you can use to go back in the game’s progress.

As I mentioned in my game preview, the art work in Necklace of Skulls is amazing. I love everything from bright colors, to the peculiar style that reminds me of Gaudi and Gauguin if they were mixed in one. Moreover, if my complaint was that Heavy Metal Thunder did not have enough imagery, the Necklace of Skulls has just enough – not too many, but perfectly timed and sufficient to convey the atmosphere and illustrate something I would like to see.

However, I do miss an illustration of that dragon with lava bowels, and that four headed hydra, as well as the magic-powered luminescent green ship.

The sound score is tense and sinister at times, and I found it complementing the atmosphere and engrossing in all the right ways. I would add some water pouring sounds to the sauna scene, though, because it is plain silent, which is a stark contrast to the other scenes.

As I said, the replay value is huge in the Necklace of Skulls. You have four characters, and you can play up to three stories in parallel accounts. Each story, when or if failed or succeeded, can be rewind and replayed from any checkpoint. Take one step differently, and you will be playing a totally different gameplay, with new elements, new characters, new items, new challenges.

I may have replayed it insufficient number of times to be able to make the right choices, and each scenario differs from the others so much you will be even playing in the different chapters. In fact, the game features 12 chapters, each with a LOT of sections (min 11 – max 160), and one character only goes through several sections, occasionally skipping several chapters.

As a result, the branching seems crazy here, and I don’t feel like walking the same path again, even knowing what objects I would need, just because I want to experience all the diversity offered here.

Without a doubt, this gamebook will keep you busy for months, whenever you are in the right mood. For example, during my first gameplay I was so anxious to succeed fast, I would walk past the things I could have explored, or ignored folks I could have helped or interact with simply because I wanted to mind my own business. On my next try, I took every chance to interact with people and situations, but I erroneously thought I would still be traveling the same route. Nope, the game took a totally different turn, but I died anyway. So, I gave up on hurrying my victory and chose to enjoy the trip itself, not longing for the destination too much. 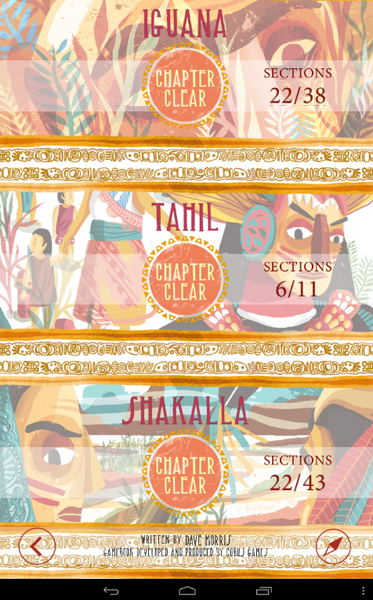 Necklace of Skulls ignites curiosity from the start, as it teases you with bright scenes from a very beautiful, yet cruel culture and mythology of Mayan times. Its story is both mythical and very personal, taking you on a quest to save a dear person and explore the mysteries of death, the way seen by Maya.

Dave Morris’ lightweight narration makes you forget you read a book and lets your imagination watch a movie instead. The illustrator Xavier Mula paints vivid imagery that bring the characters to life, and many of those have become my favorite wallpapers and user pics. By the way, Cubus Games have released a wallpaper app with Necklace of Skulls imagery only, so I suggest you grab the artwork for your device, be it iOS  or Android.

A mystical experience, Necklace of Skulls is so branched out I have no idea how many games you can have here playing as just one character, not to mention trying out four of them. Without a shadow of a doubt, this purchase will keep you entertained for a long time, and each new gameplay will be different. Don’t forget though, that this is a book.