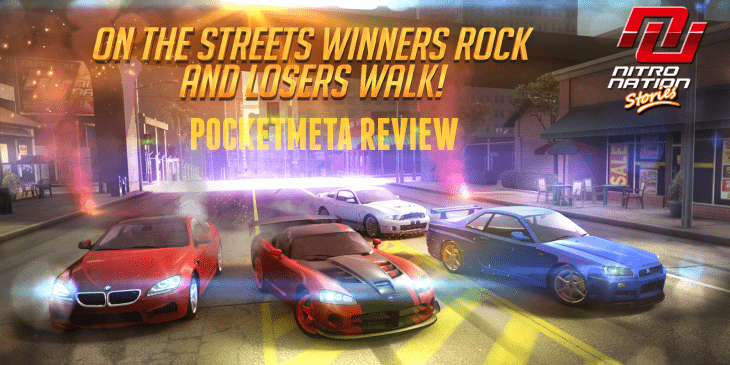 I have spent a good while with Creative Mobile’s recent release – Nitro Nation Stories, and throughout my gameplay progress, I’ve changed my opinion several times from “yay” to “nay” and back to “ok” again. The bottom line is it’s a good game when you know what to expect – NN Stories is a drag racing game, which means you won’t be racing and driving, but only tapping the gear button for a perfect start, tap it for a timely shift and tap left/right to avoid collisions. If you’re the kind of player that does not consider drag racing a “real” racing game, you might as well skip this one. Everyone else is sure to enjoy it. 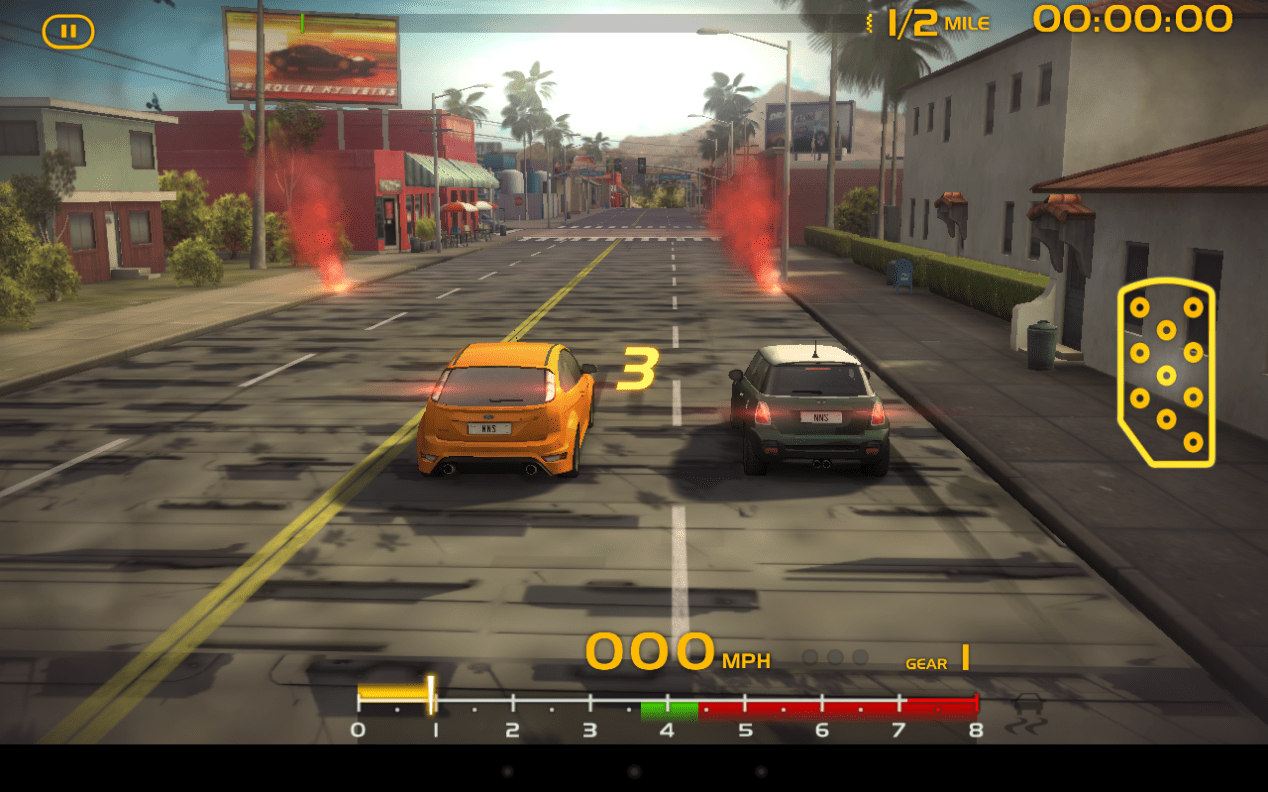 Nitro Nation Stories offers five game modes with pretty much the same gameplay going on, but the difference is how they’re dubbed and who you’re competing against. The Story mode has you racing against various characters, including that lady on the cover that looks like Megan Fox with a plastic surgery gone wrong. The story begins with you, playing as a dude named Justin Carr, getting fried in your own house as it explodes. You make it out alive, but broke and with a few heavyweight hospital bills. The guy that looks like a younger and more muscular version of Lenny Kravitz keeps nagging you to race, so race you will.

The Story mode consists of five chapters, each with some 9 or 10 levels to complete. You can’t just lose a race and go on – once you hit a challenge you can’t beat, you have to spend the cash on upgrades.

Each race earns you some cash and gasoline you need to race. Each won race in the story mode, as well as each race in the other four modes – Street Race, Underground, Division and Pro Street – are there so you can race to grind for the cash and upgrade the car. 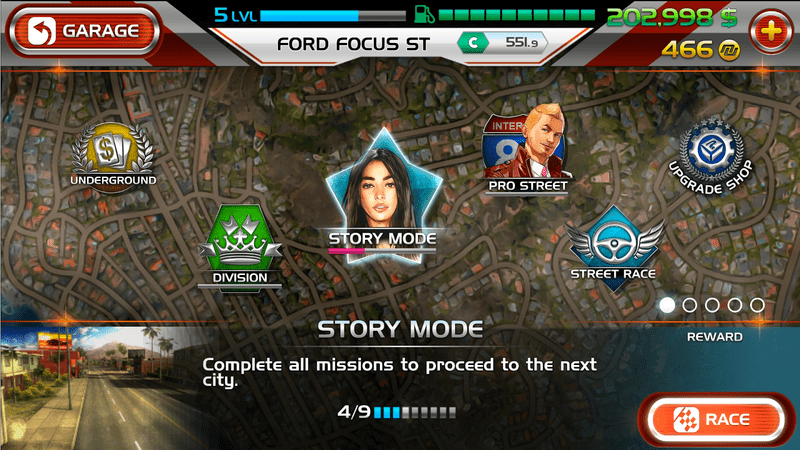 By default, The Story Mode is available; shortly after, the Division and Street Race are unlocked. Pro Street is the last one to unlock, as you reach a certain XP level. You earn some cash in each race as you unravel the events in the Story Mode, which follows the bloody trace of a mysterious murderer killing the drag racers participating in the illegal street races. 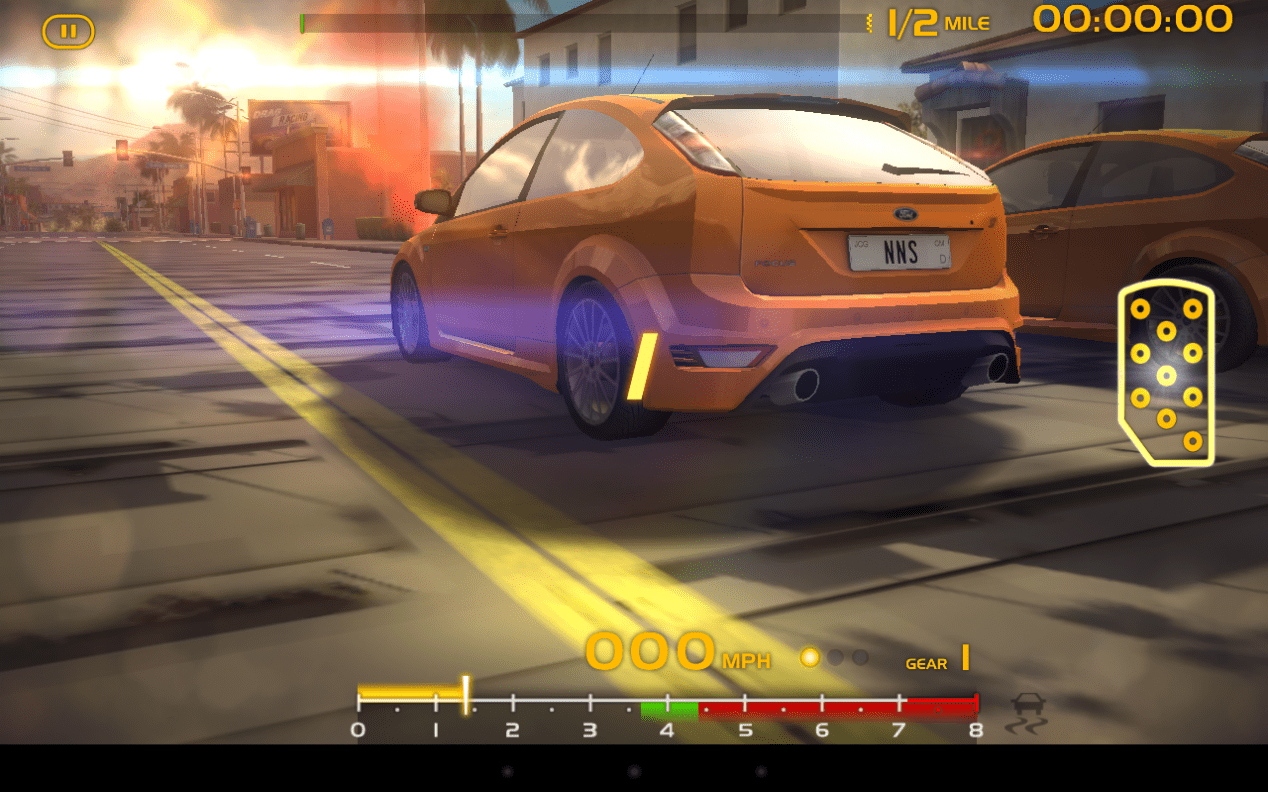 NN Stories does not support the external controls, mind you, and the number of options is zero – there is nothing you can control with a tilt option here. So, at the bottom of the screen there is a speedometer with indicators, which let you know when it’s the perfect moment to shift. There are three dots that also indicate the same, and if you time your tap to coincide with the third dot’s going green, you’re the master of the race, but let the mark reach the red area and you’re over-revving, thus losing the momentum to gain more speed.

The, there are two buttons on the left, which let you change lanes left and right to avoid hitting other cars. Normally, you’re racing a four-lane street, but there are five environments, so expect a change of scenery at some point.

You can also buy yourself the nitro tank and use it once per race, just time your boost well and it can be a game changer. 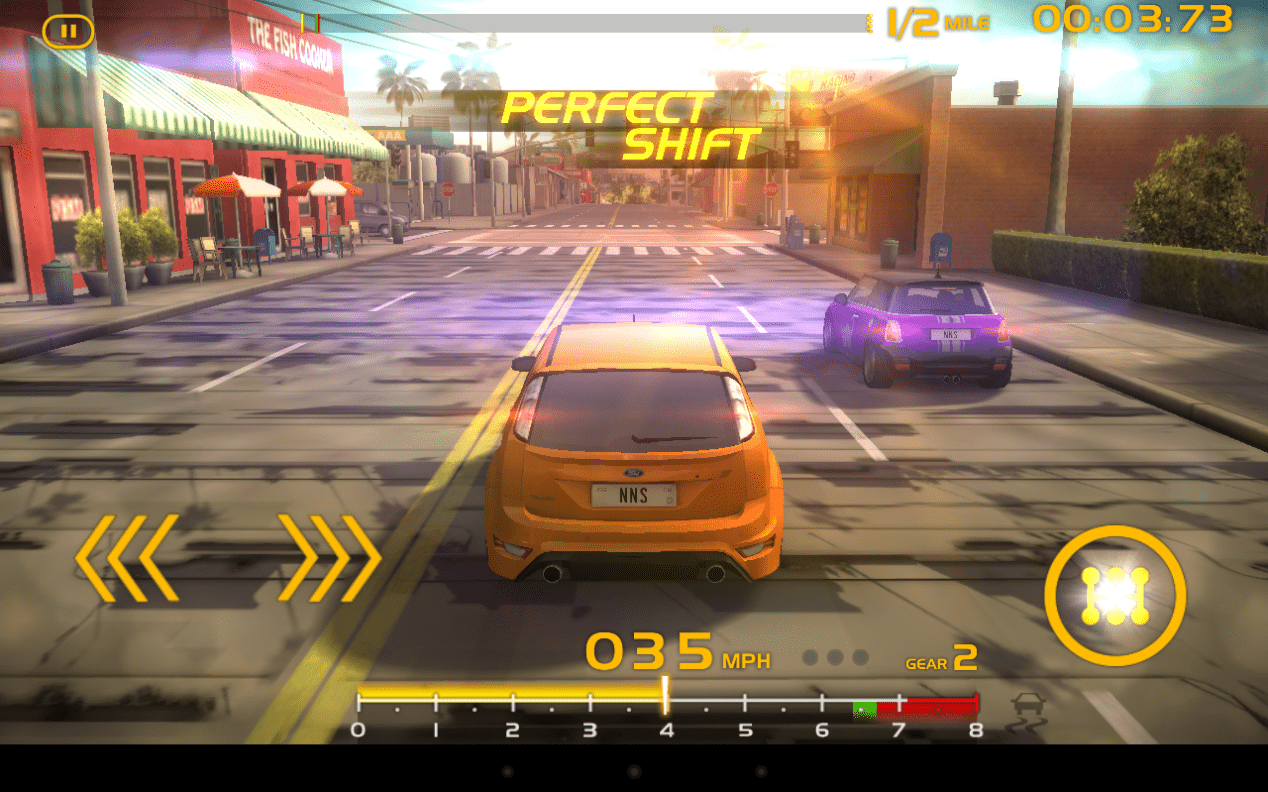 There is a nag in the controls, however. The buttons are not as responsive as they should be, and it’s not as easy as I’d find it comfortable to get used to that initial rev up button. Tap it and the speedometer revs up immediately, so you can’t just keep it pressed as the countdown timer ticks. As a result, the start is a series of desperate short taps that have to do with guessing more than with the actual feel of the mechanics.

The left and right buttons, as well as the shift button would sometimes fail to register my taps, which results in one lost race per approximately 4-5 races. I have tried the game on several devices and the same problem persists. In addition, I went through the user reviews on Google Play, and I am sure other players have experienced it, too. 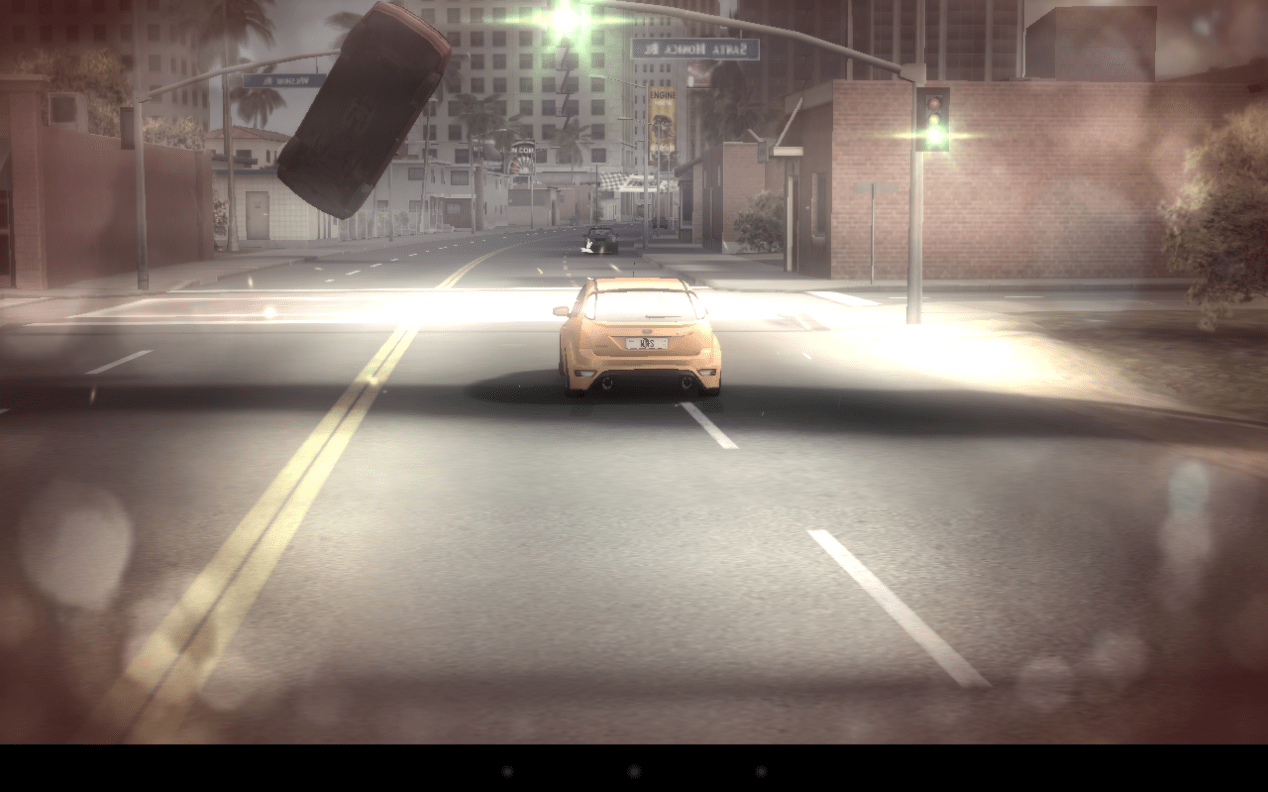 Nitro Nation Stories looks fabulous, and I have to give credit to the developer for making it an eye candy that it is. The motion blur, the shifts from color to gray and back to color as you finish the race, the flare and bloom, the particle effects, the smooth edges and the backgrounds – everything looks pretty top-notch. Overall, the game has that console-like polish to it, at least in the visual department. I haven’t experienced any framerate issues, and the option to turn off the music is a very welcome one. Not that it’s bad, it’s just not my favorite. You can leave the sound effects on and enjoy the game as it is. 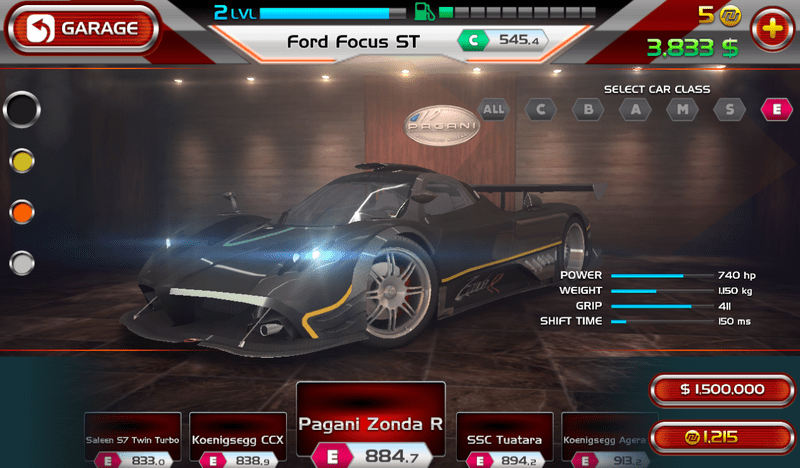 As I said, the control buttons fail to register taps sometimes, which is something that needs to be addressed. Overall, however, the performance is smooth and enjoyable.

The first screen you see is the Garage, where you can Upgrade your car, purchase in-game upgrade packs, fiddle with the options and choose the Mode of your race. 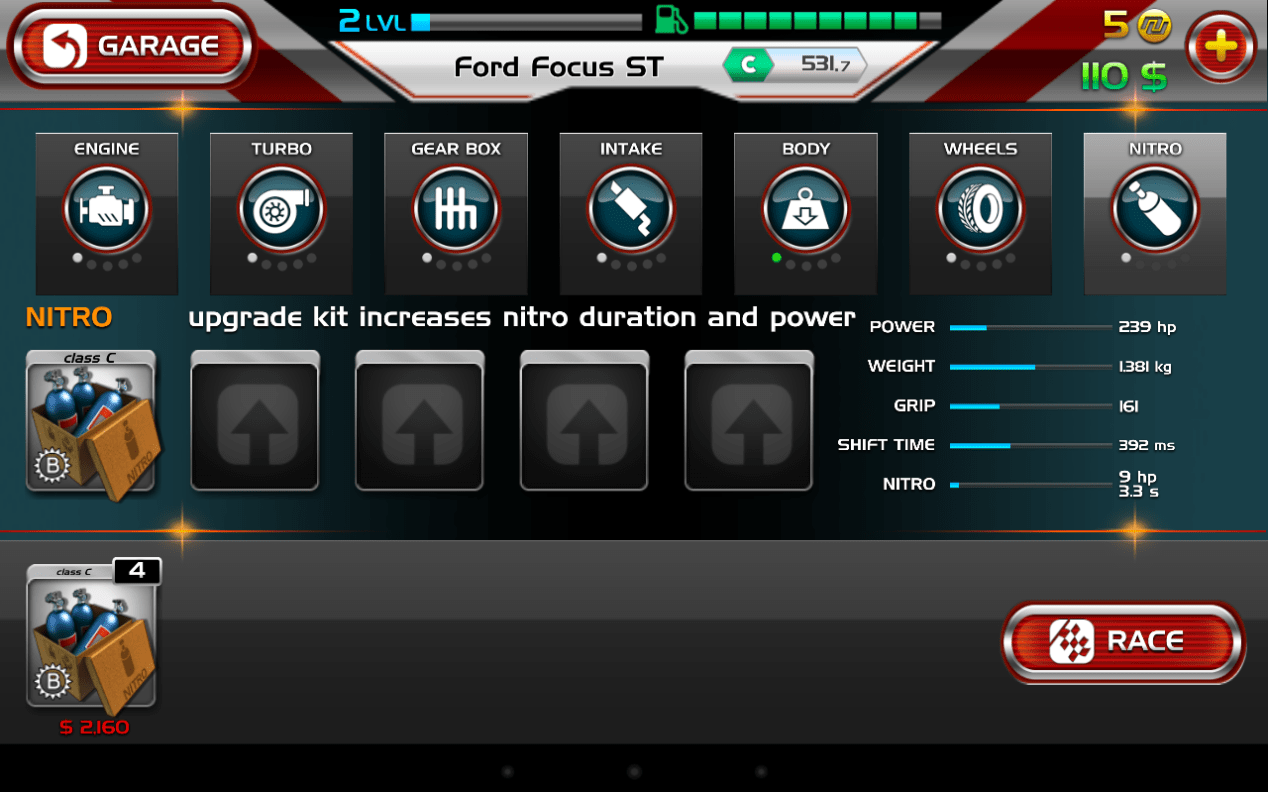 The Options menu lets you toggle on and off the music, sounds and vibration, as well as switch from metric to imperial units. Now, if you don’t mind that battery drain too much, you should play with the vibration on because it adds to the overall fun factor, especially since you have so little control over the race itself.

The Shop button takes you to the exhibition hall, where you can look at the other cars on sale. I say “look at” instead of “buy” intentionally. You can grind for the cash to buy some okay-ish vehicle like a Mini Cooper, but the high-end cars remain equally inaccessible, so the Viper, Infiniti, Jaguar and Pagani are more like a museum exhibition rather than a purchase option, unless you are ready to pay in real cash. 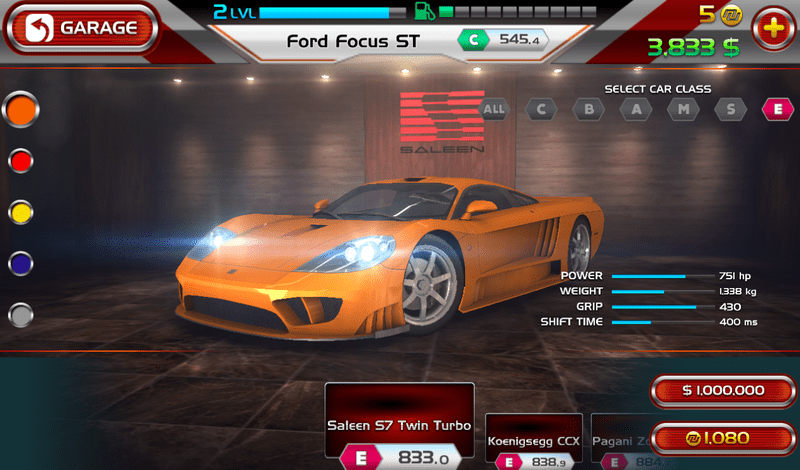 The + button at the top right corner takes you to the IAP zone, where you can buy packs of coins. Some time mid-way through the first chapter of the Story mode, the game will grant you some 10.000 in cash, and will immediately offer you should buy a starter pack of upgrades for them. What is not entirely clear is why the game wants you to go to the Upgrade section to implement the purchased upgrade kit. In my case, the purchased kit got mysteriously lost and I had to grind for more cash to buy the upgrades on a standalone basis. 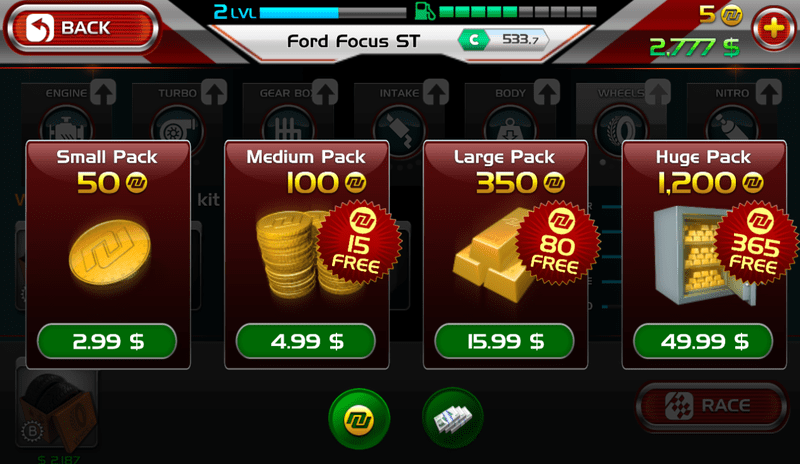 Now, to the IAP part. As I mentioned, the top-tier vehicles will pretty much remain a very distant perspective. I am most sure I won’t be playing that much as to grind for enough cash to buy me one, even though the replay value is decent – it’s still a tap to shift gear game. The current Ford Focus is ok, and I keep spending cash on the upgrades, and my closest shot at a new car would be a Mini Cooper. 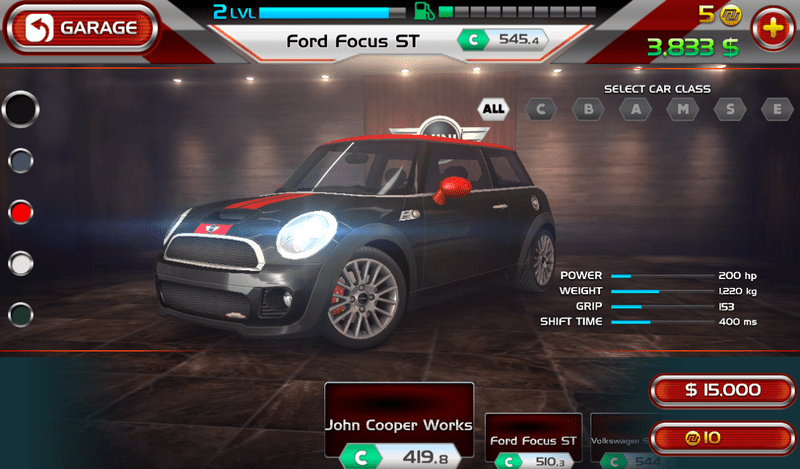 If you intend to buy coin packs, you may very well see the breakdown of the car prices in the Shop and see how much you need to cash out to buy a top-tier car. For example, a no-fun Volkswagen costs 45 coins while a 50 coin pack costs $2.99. Chevrolet Camaro costs 480 grand or 405 in-game coins. There is a large coin pack of 350 + 80 for free, which costs $15.99. So, there you have it – Camaro costs $16. Infiniti is somewhat cheaper, but is still in the same category while Pagani Zonda R costs 1.215 coins, or 1.5 mln in-game cash, which would require you buy a huge pack of coins worth $49.99 (1.200 +365 free). I’ve also read in one of the user reviews that one particular BMW needs some special sticker to be activated, even if you buy it via IAPs – not sure if it’s true, but worth mentioning. 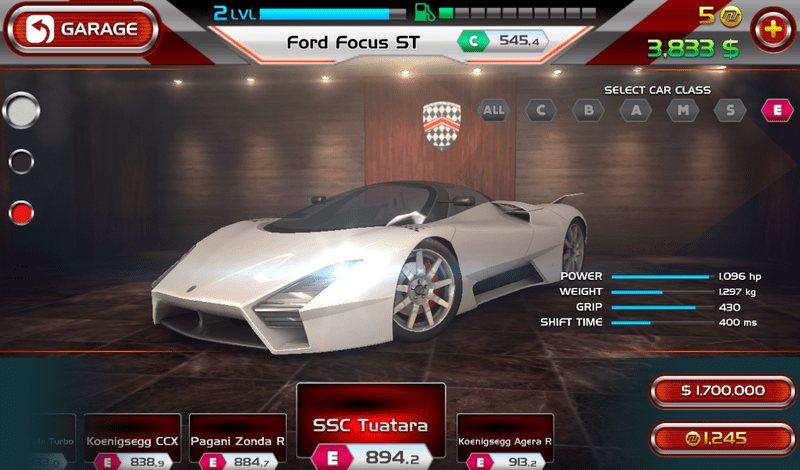 Grinding is an option, and if you are head over heels in love with the game, I am sure you can invest your time instead of money and upgrade a medium-class car to maximum. The further you progress in the story mode, the better car you will need to beat the races, obviously. However, the rewards remain disproportionately small if compared to the increasing cost of upgrades, so the grinding may become tiresome at some point.

Oh, and there is also the gas-energy system, but you get gasoline for winning races in the story mode. However, if you are stuck grinding, you might eventually hit the bottom, and yet, the gas is refilled rather quickly – one tank per 3 or 4 minutes. 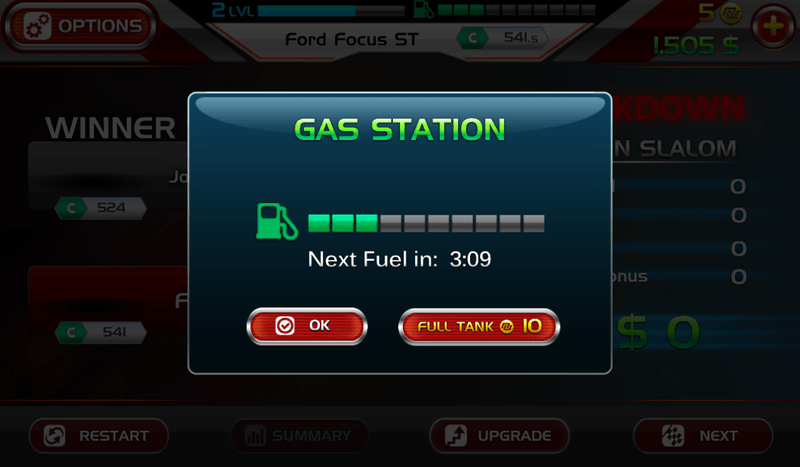 Nitro Nation Stories is certainly a nice distraction with good looks and simple gameplay, but as the novelty wears off and you realize the cool cars are too expensive to even start grinding for, you might eventually feel less enthusiastic about the game. It is still a worthwhile download considering you can play it offline. 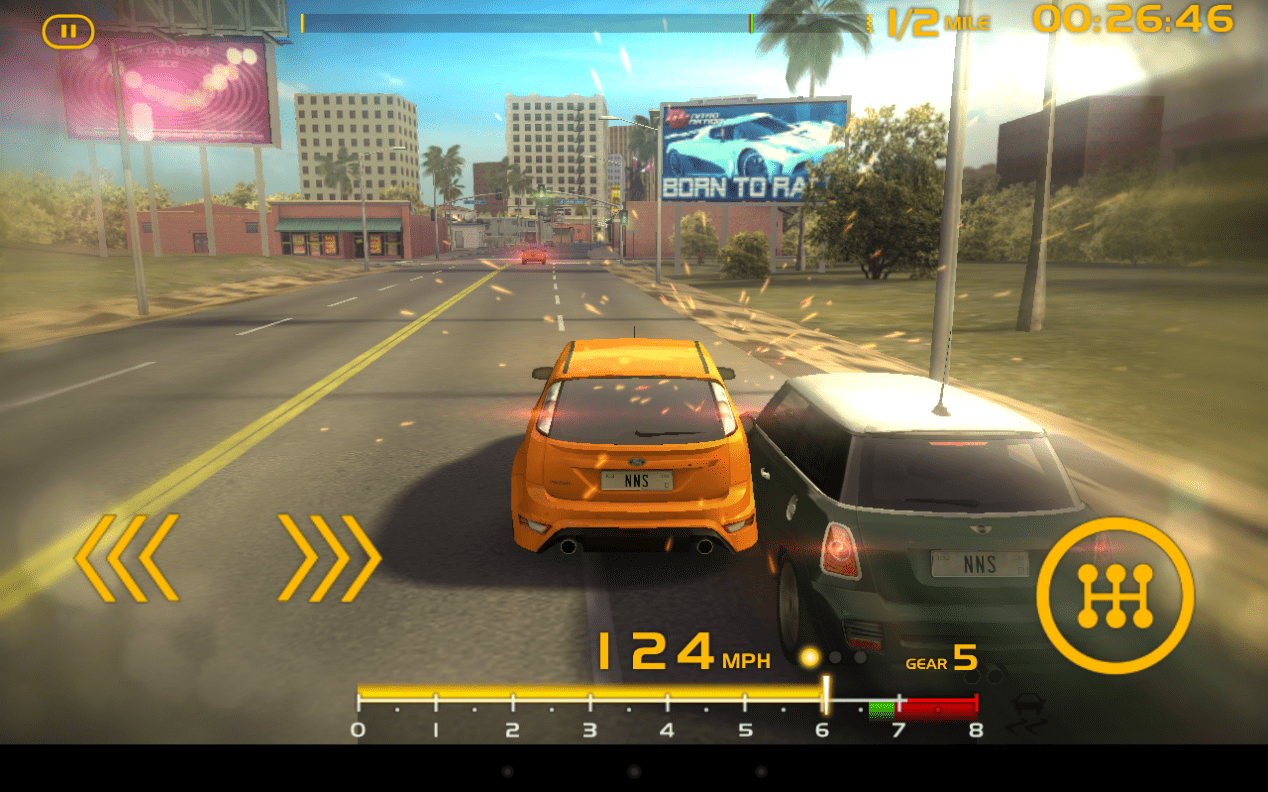 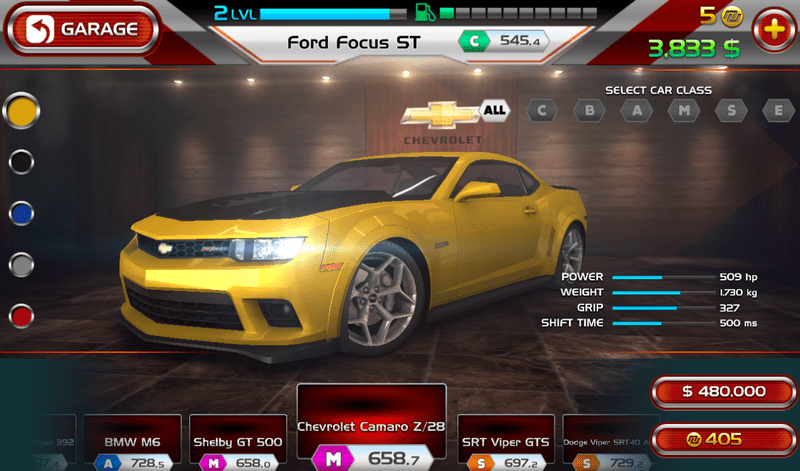 Nitro Nation Stories is a drag racing game, meaning you compete to accelerate faster from a standstill. You don’t actually race, but tap the gear button on time to accelerate or boost your nitro. Yes, you can switch lanes, or hit another car occasionally. It’s a peculiar sub-genre in the racing niche, and NN Stories is spectacular and very well worth playing if you are looking for a beautiful, quality, but free game, play-able offline. If that is the case, you have found your next favorite time killer. The game is fun, quite simple, but suggests grinding if you wish to advance. It is definitely one of the best releases of the past month, and if you know what to expect you can enjoy it for a good while. Just remember that the high class cars are quite expensive.