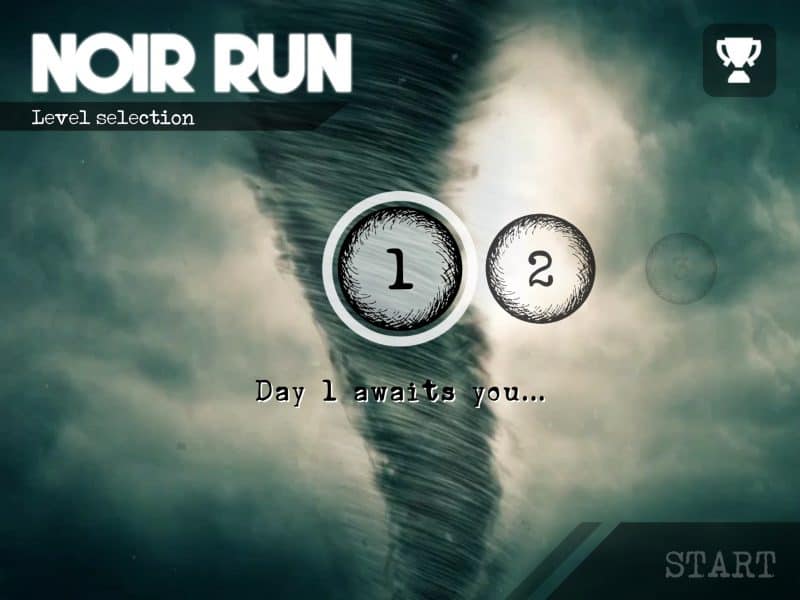 I’ve been drawn to this game since I saw screenshots, mostly because I’m a sucker for anything black and white. Fortunately, I was given a promo code to try it out for free (thanks Rob from Kronnect!), and I’ll say it has taken over my Saturday night. Lately I’ve been noticing a lack of real challenge in the mobile games I’ve been playing, even though there have been some great games, they become more mindless rather than engaging.

Noir Run was a very nice change of pace, and had me pretty intense quite frequently throughout the game. Although there are a couple of things that could use improvement, it was overall an enjoyable experience, and I definitely recommend checking this one out!

Like I said, I’m a sucker for anything black and white, so I was definitely a fan of the visual aspects of Noir Run. I’ll get my one issue out of the way early — random frame rate stuttering. Although it runs perfectly smooth the majority of the time, there was a few times that it dropped to very low fps just briefly. It didn’t happen every time I played a level, and not frequent enough to hold it too much against the score. 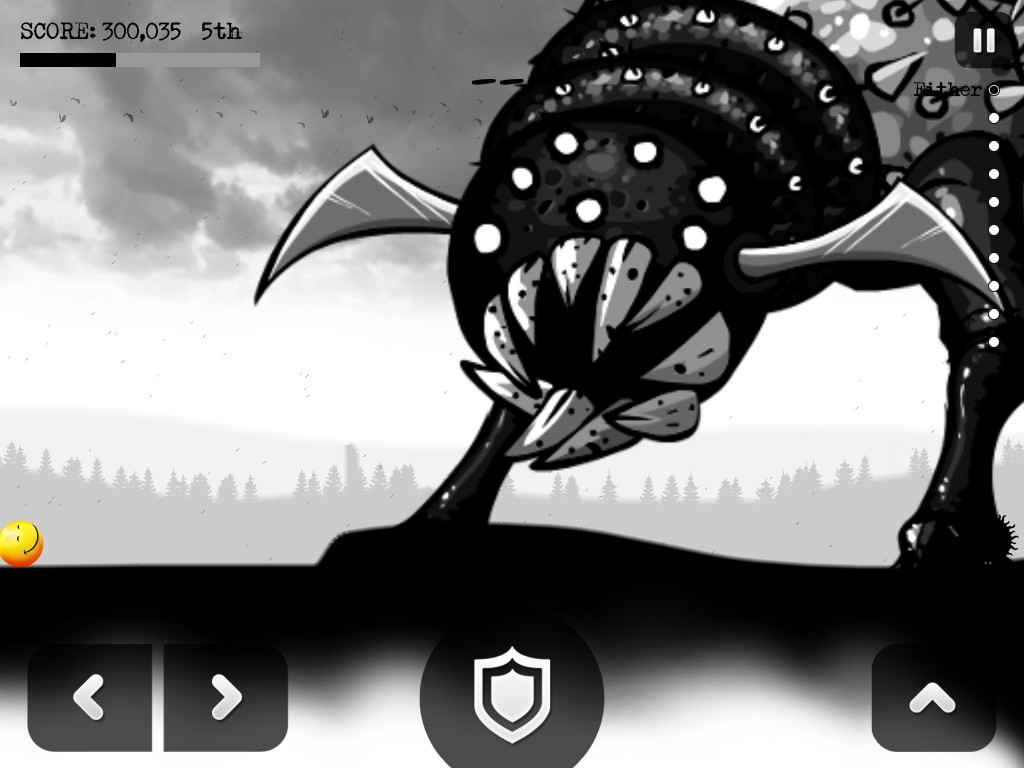 You’ll encounter a lot of small objects in the game, starting with a small stalagmite that rises in and out of the ground. As you progress, more objects which you need to avoid coming into contact with start showing up, but nothing too detailed visually or large in size. Then, you run into a boss, and it’s big, scary, and extremely distinguishable. In my opinion, keeping most of the aesthetics and scale lower through the levels, really made the bosses at the end of the levels more impactful.

Playing this game with nice headphones really helps immerse you into the game world, and appreciate the unique design Noir Run has to offer.

Those looking for a cakewalk may have trouble with Noir Run, but I found it to be a refreshing challenge from the majority of mobile games being released lately. It starts out very simple, but I had some difficult even with the first couple of levels. Essentially, you want to avoid coming into contact with anything other than floating power-ups. There is a phrase associated with each level, and you’ll be unlocking letters to each word in the phrase as you make it past each object. Every time you die the word will reset, but you will continue progress in the phrase. You have limited HP, displayed by the bar on the top left corner of the screen, which can only be replenished by the medicine power-up. 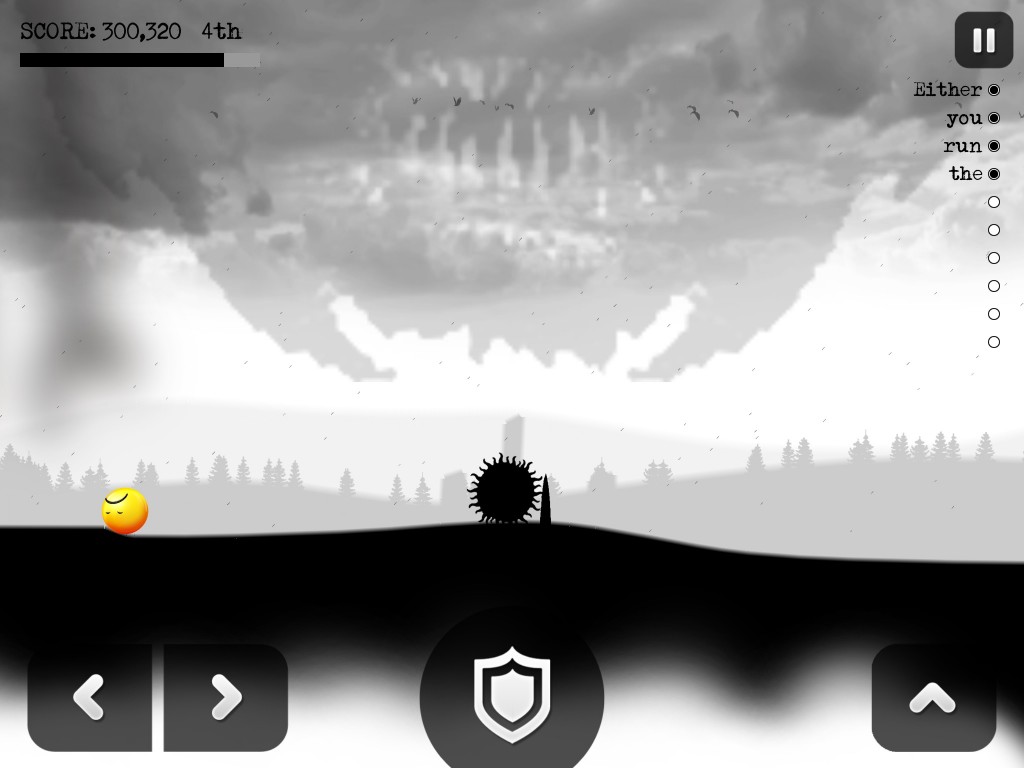 Now that we’ve covered the basic concepts, there’s a bunch of different stuff you need to be aware of that can show up at any given time. With each new level, there is usually a new object or enemy to encounter (other than the boss, which is unique to each level and present at the end). The new mechanic carries over into the next level, aka day, and gives you even more to have to deal with. As you progress through the day, objects will appear in a random order in your path and you need to deal with them accordingly. There are a lot of cliffs you can fall off of too, and these are often right nearby the stuff you need to avoid — making it even more difficult to survive.

Everything takes a bit of getting used to, which makes it really hard to complete a day on your first try. Using your power-ups efficiently is very important to success, especially if you are having trouble getting past some of the obstacles. Personally, I had trouble with certain scenarios, and using a power-up was my only way to get past them (for example, stalagmites immediately before and after a cliff). The only IAPs were for bonus lives, which isn’t necessary, but you could go that route if you are really struggling. There are also gift points, which are earned just from playing levels, and can be used on special perks.

Noir Run has a pretty simple menu interface, since the amount of stuff you can do outside of the actual gameplay is pretty limited. It’s easy to find everything because of this, such as the gift point perks and IAP stuff. Pretty much everything is labeled by a medium sized icon that explains what the menu option is, and anything you wouldn’t be able to decipher has a description. For most, it’ll take just a couple of minutes to get fully acquainted with Noir Run’s UI and controls. 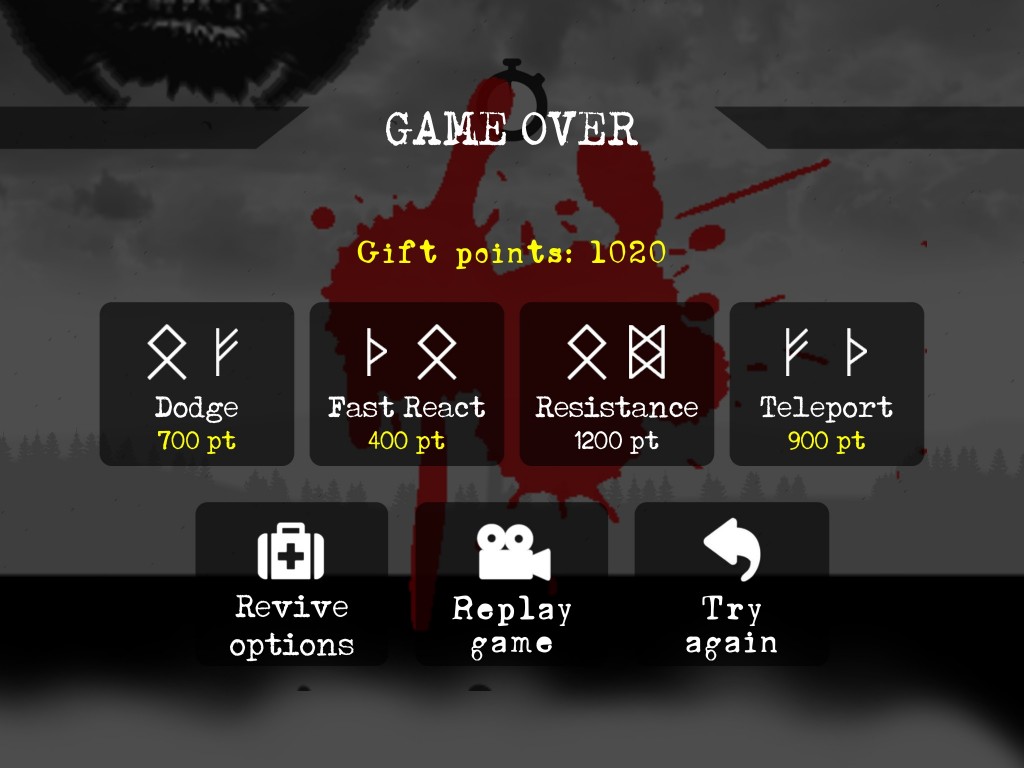 The problem I had with the Interface as much more related to the controls, and how they seemed to be somewhat unresponsive at times. This and the rare frame rate lag were not a good combination, and the only thing really holding Noir Run back in my opinion. I will say it’s quite possible that I just wasn’t tapping the right area because I was focused on my smiley guy and incoming objects. However, I was never really able to get used to it, and it seems like larger arrow boxes could be a potential fix, with an overall scale-able UI being preferred. Still, the controls did feel a bit stiff overall, so I won’t just write this off as inaccurate tapping.

Even though there’s no alternative game modes to the story mode, you’ll be well invested into the campaign, and there is plenty of playable content there alone. Unless you’re a pro at this game from the start, you’ll have several hours of entertainment and frustration awaiting you. Some of the frustration is good because of challenging gameplay elements, but some is bad as it’s due to frame rate issues or stiff controls. I never reached a point where I just had to put the game down, which is a big plus, and I would definitely say it is worth playing through in it’s entirety. 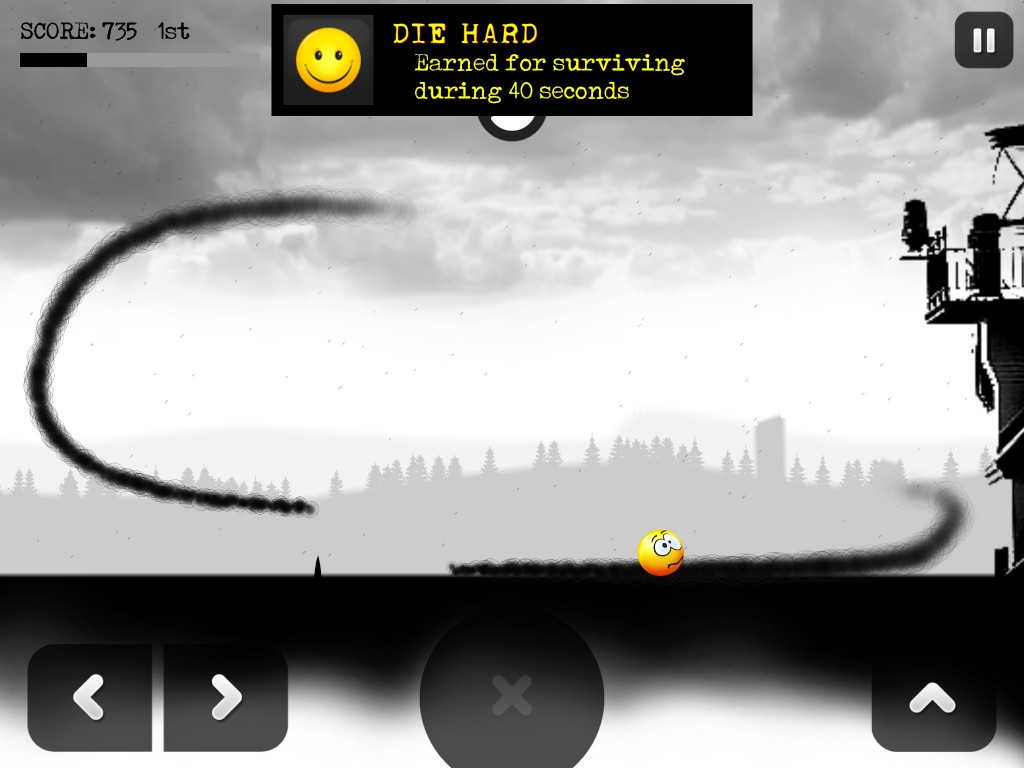 Other than unlocking achievements, the only real draw to keep playing the game after completing it is to compete for high scores. At this point, there are so many high score games that you really need something more to merit an ultra high replay value. Still, the novelty of Noir Run’s visuals doesn’t fully wear off after just one play-through, and it’s likely you may want to go through the campaign multiple times. I’m not saying everyone will enjoy it quite that much, but I know I may go back to it from time to time.

Noir Run pulls you into a very interesting and visually appealing world, full of things that could put your smiley faced hero to death in a split second. There is a surprising amount of gameplay mechanics to master, and a lengthy campaign to enjoy. If you are looking for something unique and challenging, I’d highly recommend this one.

Click here to check out Noir Run on the Apple App Store!

Be sure to leave us a comment if you’ve played Noir Run, and let us know what you thought of the game and our review!