As I write this review, my Nonstop Knight is slaying the undead on its own, earning me money so that I can upgrade his weapons. By the time I finish writing, I will have enough funds to up his stats and beat the boss.

Nonstop Knight is a fresh clicker from flaregames, and if you have a problem with clicker games better skip this one. However, it is worth mentioning this little gem is one of the best guilty pleasure games I have seen on mobile lately, and here is why.

First of all, Nonstop Knight looks darn good. I love the battle animations, the characters and the dungeons. Everything here looks crisp and rich, from the protagonist to the blasts and jumps, and slashing swords. The sound score is ambient enough to provide the extra immersion effect, but it’s not sickeningly catchy. So, a week into lazy playing I did not feel compelled to turn it off.

Second, the gameplay is addicting. As lazy as it is, with the minimum input from the player, it still has a nice feeling of progression, and requires just enough effort on your part to stay addicting. Here is how it goes. 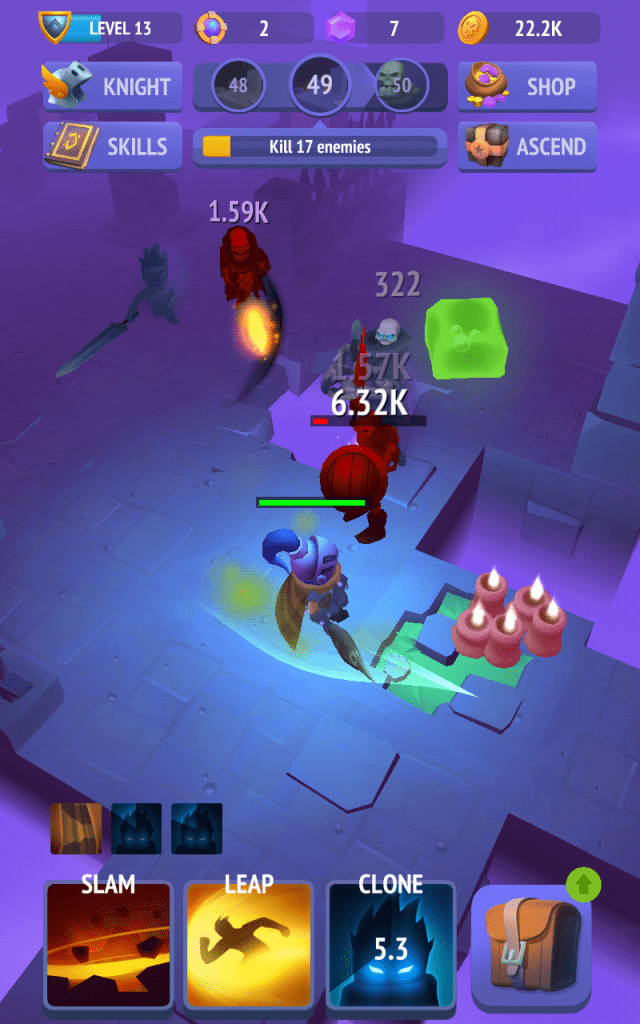 Your Nonstop Knight dashes through the levels of the dungeons, to which there seems to be no end. He runs automatically. He fights automatically. You do not control his direction, nor his fighting frenzy.

All you can do is activate a special ability and upgrade his weapon, armor and magic skills when you have enough coins. The only thing your knight can not do automatically is fight a boss. This is where you will need to time the usage of special skills, revive potions, additional spending, if needed.

Notably, your knight keeps fighting when you’re not playing the game. Launch the game, close your device and let it sleep, and your knight will keep clearing the dungeons for you. 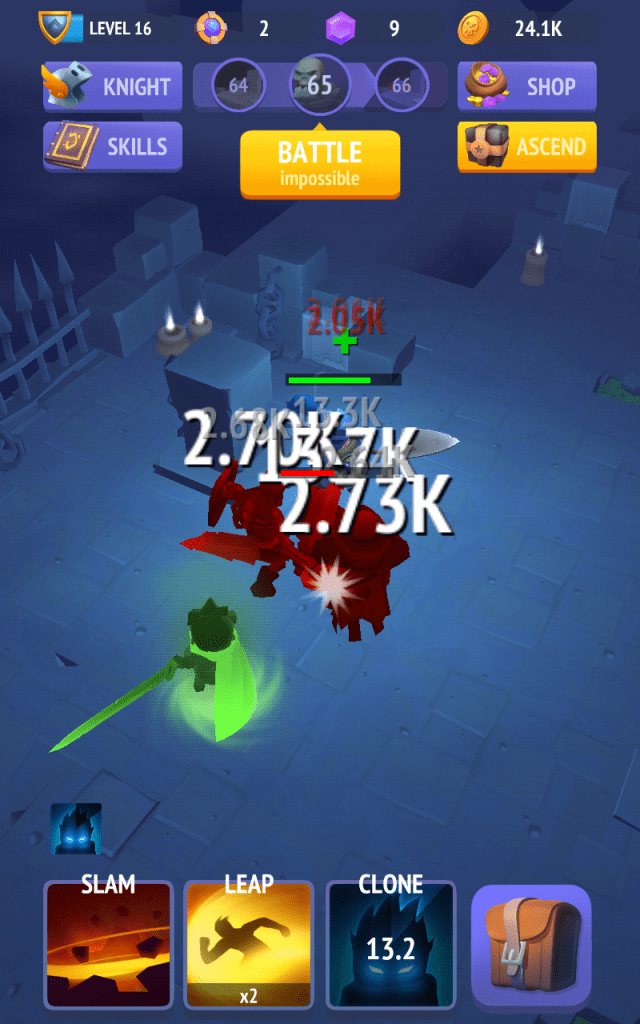 There is one thing called “Ascension” in Nonstop Knight that’s worth a say. It ups your knight’s stats when you use it, but it also sends him to dungeon level number one. Always.

So, for the first few times you ascend your knight, the tediousness of having to go through the same few dozen levels all over again is not so critical. Most of it, your knight can do in the background. Sometimes, you unlock a chest with a speed up potion. Drink it and fast-forward the battling a few levels. When under this potion, your knight fights the boss, too, if I am not mistaken.

However, the bad part about ascension is you lose all the gear you’ve unlocked in your previous run. It’s a bummer. You see, the first levels grant you basic chests with basic ammo and weapon. The further you advance, the better loot you get. You spend tons of coins to upgrade it, so losing it after ascension feels meh. More so if you had pretty good stuff. 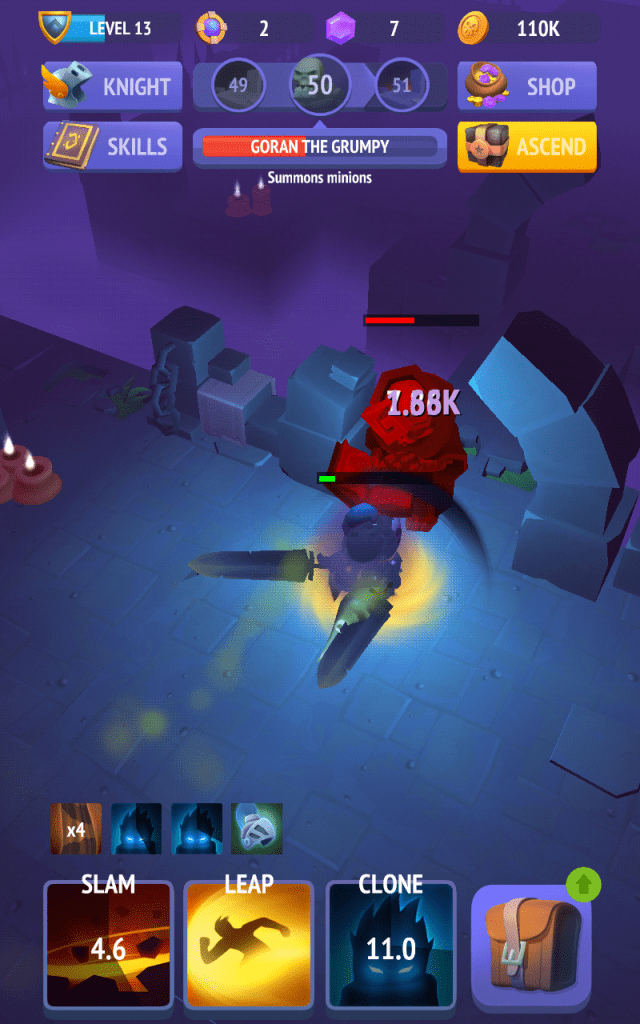 The knight’s upgradeable stuff is – weapon, armor, magic cloak. Weapon can be anything from a sword fish to an ax, katana or a shovel. Sadly, a two-star shovel is better than a one-star katana. My knight had a sword only at the beginning. Ever since I keep getting odd stuff I would not want to use as a weapon, but alas. The ammo is mainly helmets with different stat boosters. The magic cloak deserves a say. Some say upgrading it is worthless because it shows no immediate effect on the fighting abilities of the knight. It’s not entirely so. The cloak ups the stats of your special skills, the three buttons at the bottom.

Now, these special abilities have several upgrade stages to them, and you unlock the upgrades as you advance. The upgrades come as runes, and you can switch between them if you like some particular ability or how they work together. These abilities also remain upgraded after ascension.

Aside from that, there are gems, tokens, and potions. Sometimes, you get a potion as a gift from the mystery chest. Sometimes, you can choose to watch an ad for extra coins. You earn a few gems for completing missions. Revive potions are good in one situation – when you need just a few seconds more to defeat a boss. When you need two revives per boss, you are seriously under-scored. 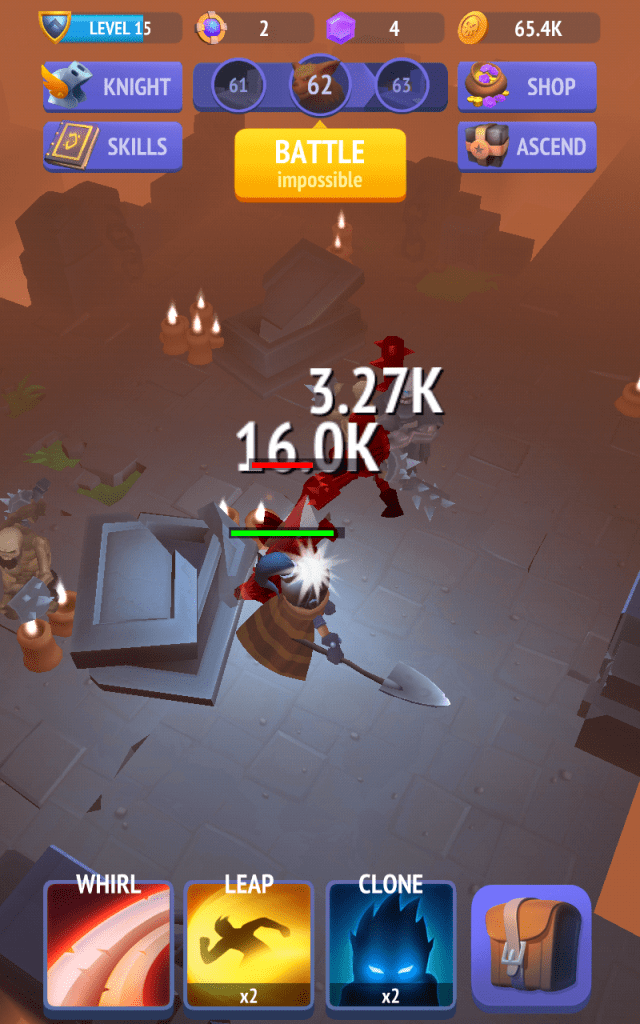 There are IAPs, but Nonstop Knight is not aggressive. The video ads are optional, and for the first couple of days I played without them. There will come a point when ascending yet again will feel like too much of a bore, so you might invest into a pack of gems. However, it’s a circle, and when you clear yet another set of dungeons and face another impossible boss, you will want to invest again.

I have managed to steer clear of that just by letting the game play itself and occasionally watching ads. Do the upgrades until you beat the boss and move on. At some point, you will have to ascend, though.

Needless to say, the difficulty is not an issue, and even kids can play it. Its replay value is surprisingly good, and you can find yourself pretty hooked on this mindless, addicting clicker fun.

Every now and then Nonstop Knight will throw in some new gimmick into the scene, and you will enjoy it. You can have double clones that fight by your side. You can have a healing clone. This way, you knight has a party. His special abilities are spectacular and provide enough visual variety to keep tapping them buttons. The enemies come in decent variety, the ugliest of sounds and creepiest of mugs. 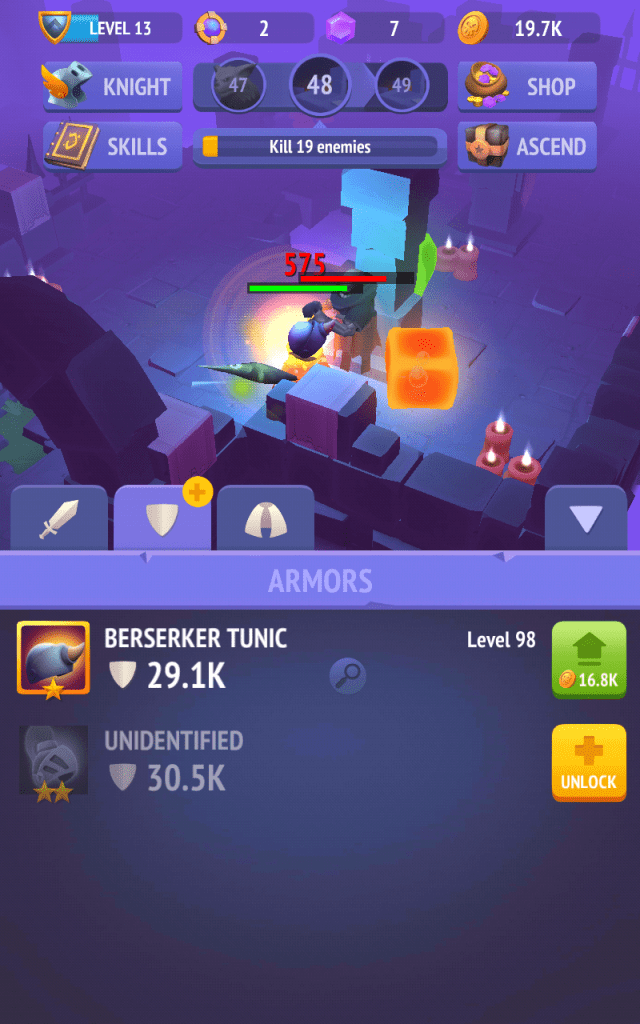 Yes, it’s a time killer, but it’s a game done right. You can play it offline; it looks good; it’s addicting beyond any expectations. It manages to be rewarding enough to keep you coming back for more.