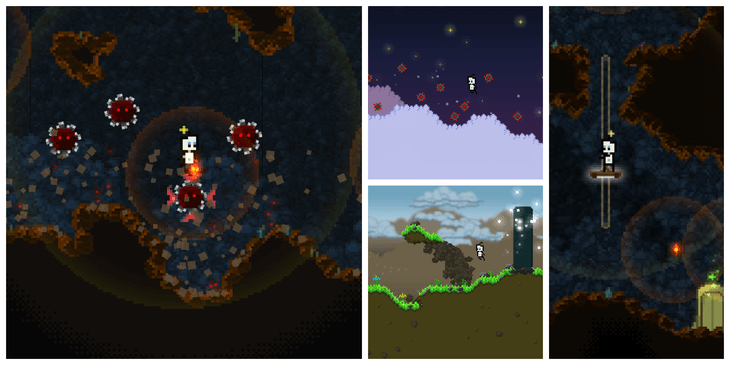 Nubs’ Adventure is a great find if you are fond of indie games, 2D platformers or Metroid-like games. We added it to one of our best Android games lists even though it is still in early access. This review, or rather an overview, of the early access game is to give you the heads up about a new way indie developers seek gamer support.

The game is an instant charmer – the moment I heard that tune, I knew I was in for a treat. Nub is a little white pixel guy living in a small house above a cliff, or a mountain. His world seems like paradise, until you know it’s not. Two red pixel guys throw Nub off the cliff while attempting to rob his scarce belongings.

Interestingly, a huge red pixel worm (reminds me of the good old Dune times) catches Nub with his jaws. I thought that would be the end of Nub, and when the next moment I saw Nub waking up lying on green grass, I thought this time it must be paradise.

Again, I was wrong. It appears that the Dune giant worm is a friend, and so is a shiny white pixel wisp, and a guy called Gunther. Who they are, and what is the purpose of Nub’s adventure is for you to discover while you will also encounter those two bad red pixel guys who tried to kill Nub. Besides those two, Nub’s world is also full of dangers – wasps, spiders, crabs, steep cliffs, deep waters and traps.

Even though it is “early access,” the game feels polished and runs smooth. The controls are straightforward and you can have the on-screen buttons on or off. Nub can move forward, backward and jump. There are also two action buttons that let Nub interact with objects (open chests, press buttons, take keys) and fight (throw a boomerang, or crawl ropes).

The controls are responsive, simple and easy to figure out. 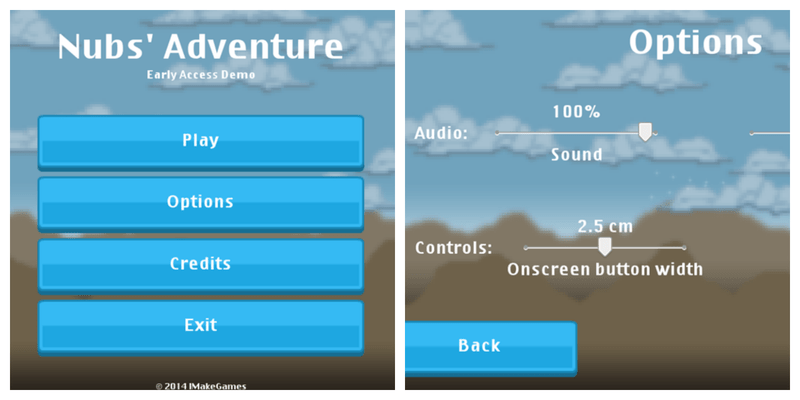 Nub has to get through a great number of environments, and some of them will offer teleports to jump to other locations. All environments contain a number of challenges – some are in the way the traps are located, other are puzzles you need to work your way through or around. Sometimes, you would not see a solution to the puzzle until you walk around the environment.

Nub is a great jumper, which lets him avoid a lot of traps and foes. Some encounters, however, bring some perks, if you win them. For example, that red pixel guy, when killed, loses his boomerang and Nubs can take it to battle the baddies.

Nubs collects keys along the way, and here you need to pay special attention to encounters with other characters, namely the red pixel burglars.

Nubs can die, and when he does, your gameplay gets back to the latest checkpoint. Checkpoints are those funny moments Nub gets on an illuminated platform and a copy of him gets imprinted in the light.

As of now, there is no limit to the number of lives Nub has. Nor there is a limit on the time you can play the game. The limit is the end of the unfinished, early access game.

Everything in the early access game is free, and obviously, the developer released it to harvest user feedback and fix the bugs they encounter. As of now, I have not encountered any. What I do wish to point out is a little button that gives you the opportunity to send $1 to support the ongoing development of the game – the developer calls it “buy me a coffee.” This is by far better than a Kickstarter project you never know when it hits Google Play. Here, you have a fully playable unfinished game – you can see its beauty, performance; touch and feel the fun of it, and fund its remaining development. This is a new way of crowd-funding I personally find fair.

As of now, there is no news whether the $1 will make the full game available to the backers when it is released, or not.

However, you can see the game is in active development, and new screenshots appear regularly on the developer‘s Twitter page and change logs. Apparently, there will be plenty of levels, new traps, and an awesome deal of pixel delight.

Nub’s Adventure is a 2D pixel-styled platformer – beautiful, atmospheric, cute and somewhat eerie. I enjoyed every bit of it – the fiendish traps, unexpected falls into the abyss and dramatic deaths, as well as kind magical creatures helping out Nub. Every time I see that shiny wisp, I am amazed how a few white pixels can look like something otherworldly magical, but they do.

As I said earlier, the soundtrack is wonderful, creating an overall atmosphere of adventure and discovery with bits and pieces of heartbreaking drama.

Nub’s Adventure is a fun Metroidvania-like 2D platformer that takes you on an amazing adventure set in a beautiful pixel world full of friendly and dangerous characters, puzzles, physical challenges and a story to follow. It is not complete, yet, but what it offers for now makes it absolutely clear that whoever played the early access is impatiently waiting for the full game. It is charming, impressive and manages to combine retro feel and innovative elements bringing the best of both worlds, the past and the present, in an excellent game. Oh, and it has the Dune-like worms! It is one of my favorite new indie releases, and totally worth supporting. Try it.