Outside World is a competent classic puzzler, not too long, not too short, not too easy, not too complicated – it hits the sweet spot that makes it accessible for kids and enjoyable for adults. It is a $0.99 single purchase, no IAPs, and as far as I am concerned, it is one of the best new puzzles in this price range you can get on Android. If you are still on the fence, read on. 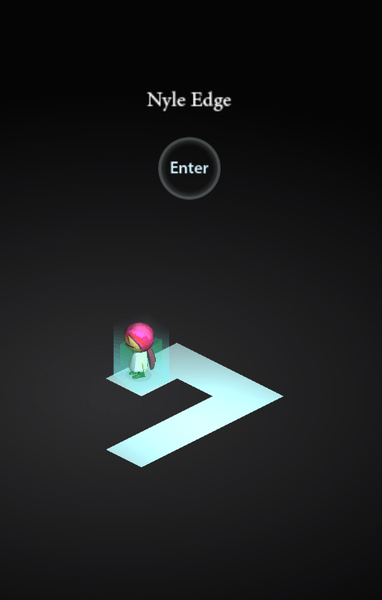 If you let go of your Monument Valley expectations and take the Outside World for what it is, you will surely appreciate its traditional take on puzzles.

You play as a little girl named Krysten, who falls asleep and gets into a maze-like world of dreams. Well, you could suppose she’s in coma, too. The game gives you only as much or as little information as it thinks you need to start playing, so you’re pretty much on your own and know what the girl knows. She wants to find a way out and go home, even though home is a vague location, too.

The girl is not alone in the maze. Interconnected and co-dependent with her is a ghost-like girl named Jaynie. Wherever Krysten goes, Jaynie follows, and you can switch from one to the other. Jaynie is invisible while you play as Krysten, but when you switch to Jaynie you can still see Krysten. 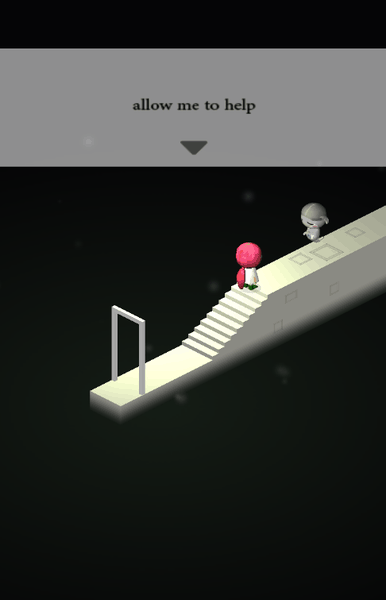 The ghost girl can float above the water and from one side of a cliff to another, which is a significant help in Kristen’s journey.

Besides Jaynie, Krysten meets other ghosts, each with a little piece of advice or information she needs to find her way out. So far, I haven’t met any hostile creatures in the maze, but the maze itself does feel like it’s a place in which one wouldn’t want to spend an eternity, walking from one door to another. 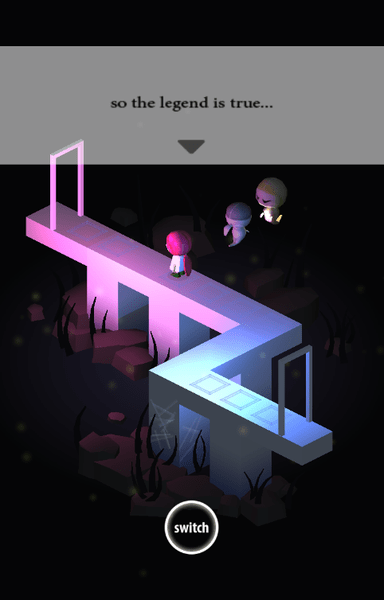 Outside World consists of a number of areas, each with a mysterious name like the Nyle’s Edge or a Piko Park. Each area consists of several rooms, or environments that represent either a standalone or, attention spoiler, interrelated puzzles.

For example, Nyle Edge has quite a few easy puzzles since it’s the first in line and serves to introduce the player to the mechanics and basic rules without actually taking them by the hand and solving the puzzles for them. At some point, there is a checkpoint, obviously, because I’ve replayed it a few times not from the beginning but from mid-way. So, the last puzzle where Krysten stands on the edge of what seems to be Nyle, all muddy and still, had me befuddled for quite some time. I gave up and took the issue to YouTube only to discover that paying attention to the little details of the game’s minimalist environments makes things a lot easier. 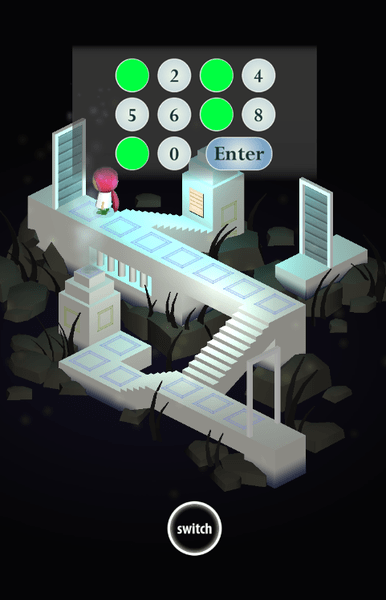 The controls are responsive and you tap where you want Krysten or Jaynie to go. If there is an interactive item, you see it and it becomes active either when you tap it, or when one of the girls comes next to it.

Each room is a door to door puzzle and your objective is to get to the grips with what you are supposed to do to open the next door. Overall, the controls are smooth and switching from Krysten to Jaynie soon becomes a familiar mechanics.

Outside World is beautiful. Again, it all depends on your expectations. Of course, when you think you’ll be playing the next Monument Valley, you should feel a bit disappointed for the game only has that familiar touch and atmosphere to it. 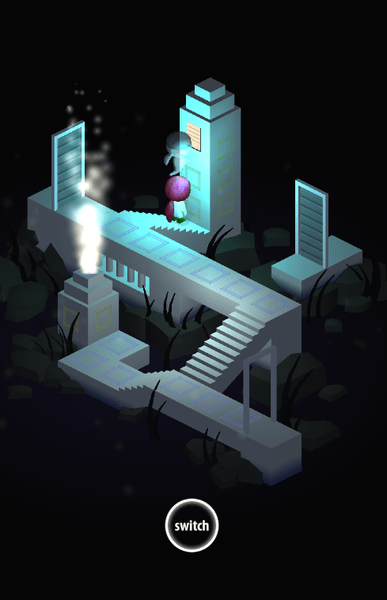 On the other hand, if you come unbiased, the visual style of Outside World looks very appealing. Its minimalist, Escher-esque, gloomy environments look wonderfully atmospheric and convey that despair the sleeping girl must have thinking of all that time she is doomed to wander there until you figure a way out for her.

The soundtrack is wonderful, and I enjoyed the otherworldly, laid-back, no-rush, no-fuss feel of it. Overall, the art work is pretty decent for a one dollar game, if you ask me.

The difficulty of Outside World’s puzzles is right in the middle of the spectrum – accessible enough for the kids to at least start playing, and offering an ascending degree of difficulty and a great variety of puzzles. Yes, once you figure out some rules and inter-relations you can feel more confident, but nonetheless the game offers quite a great deal of puzzles to provide a healthy workout for your gray matter. 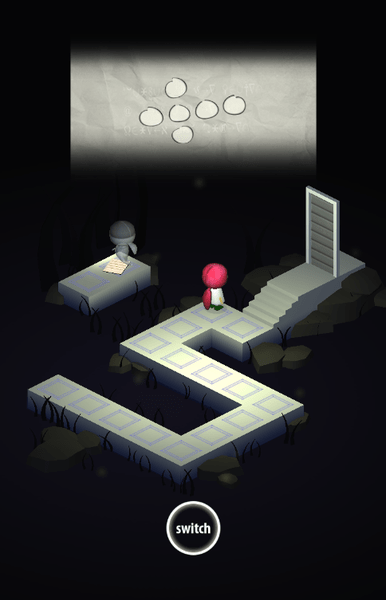 The total number of gameplay hours varies, but it would be safe to assume the entire walkthrough would take you anywhere from 4 to 12 hours. The game is also great for short sessions, when you know you can only solve one or two riddles in a go. It auto-saves, but also lets you start from scratch whenever you choose to.

Once you have completed the full journey, I honestly don’t know if the adult gamer would want to make another round, but I anticipate the younger ones might fancy toying with the game once in a while. 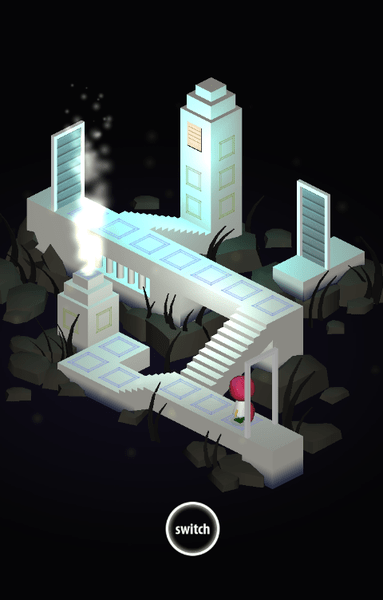 I have not experienced any bugs, lags or glitches. Some Samsung users request the S Pen support, however, which is not a con per se, but an omission considering how handy it would be to play the game using it.

Also, I would like to give credit to the developers for making it a relatively lightweight game – 15 MB; not too many app permissions. Overall, the gameplay experience is smooth and consistent throughout the game. 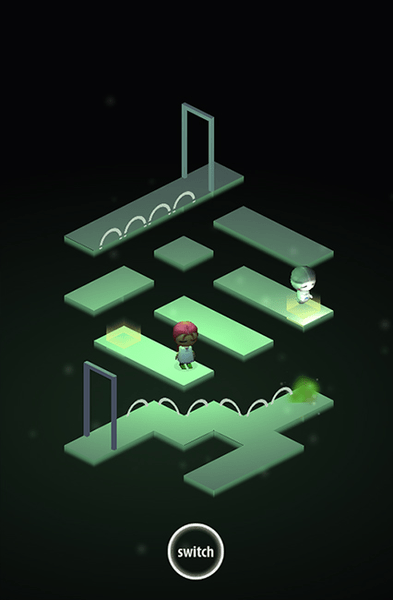 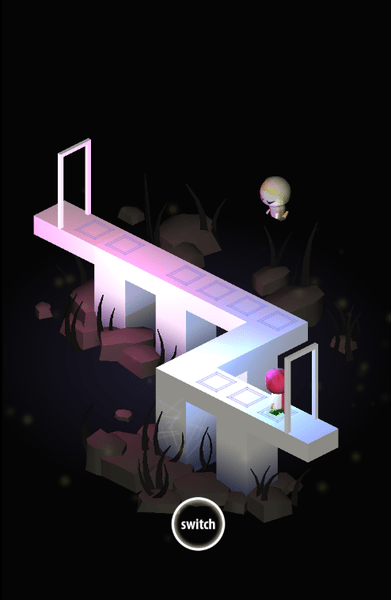 I once said Monument Valley created an entire sub-genre of games, so no wonder we see many new titles adopting that imaginative, fruitful base for their puzzlers. These games are not MV’s clones, however. If you think about Miika, Adventures of Poco Eco, or Skyward, and now Outside World – they might have been inspired by ustwo’s game, but we only want to thank the developers these games exist. Ultimately, Outside World is fun, solid and beautiful. It’s a story to dig till the end if you ever had a dream where you realized you were sleeping but could not wake up, or ever mused about how it feels to be in a coma. The accessible puzzles give some food for thought without making you feel dumb. The only downside is there’s basically little to no replay value, but considering the amount of content and the accessible price tag, it’s totally worth purchasing.