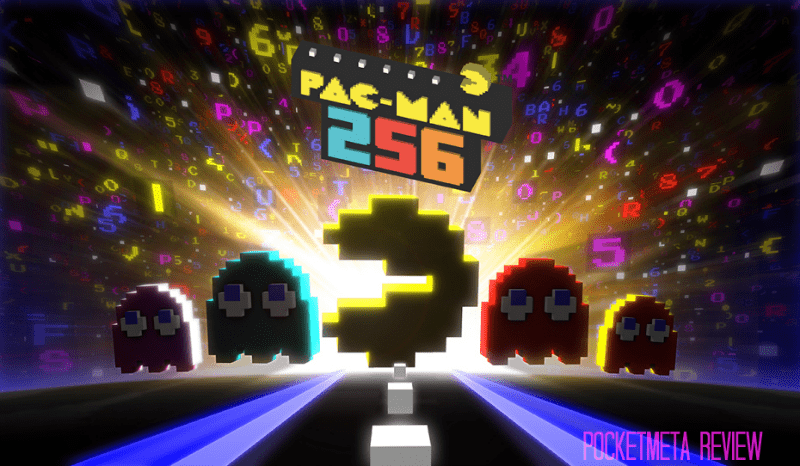 After the stellar Pac-Man CE DX release just a few weeks ago, Pac-Man 256 – Endless Maze follows suit, which may seem a bit too much of the fruit-munching theme from Bandai Namco, but it turns out a 35 year old franchise does significantly better than Adam Sandler’s Pixels. The latter stirred the interest in the old arcade games of the past, by the way, and might have attracted the newer generations to explore the snakes and the pac-man. I would not be surprised if the developer released another Pac-Man game before the year ends, but even now we can officially call it a very successful year in mobile gaming for Pac-Man.

But what makes Pac-Man 256 a valuable asset on your mobile device, you ask? Pretty much everything about it. This time around, Bandai partnered with the Crossy Road developers, and the result is a surprisingly refreshing and compelling Pac-Man game that respects the original and builds upon it in an innovative and fun manner, making it more frantic, varied and suspenseful. Check it out. 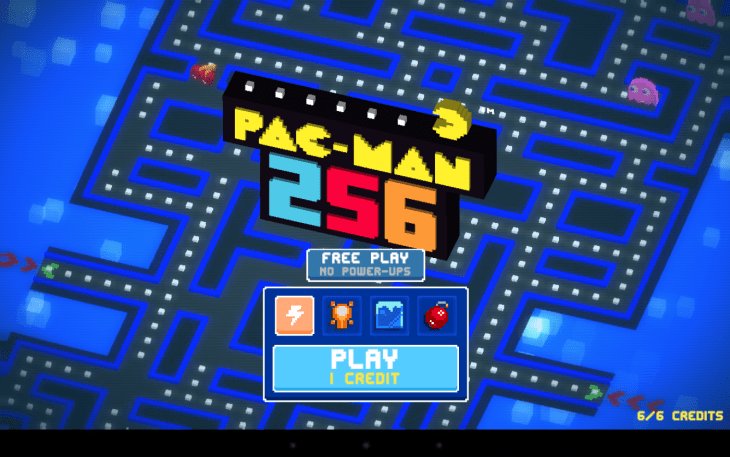 Some things can never change, and Pac-Man still runs the maze munching fruit and power pellets. However, this time the maze is endless and it’s being steadily gobbled by the 256 glitch, a well-documented thingy that rendered the 256th level of the original game unbeatable. On top of that, the isometric ever-expanding maze is 3D, and better viewed in the landscape mode rather than in portrait, because the latter cuts of some critical areas – note that.

So, below is the vortex of the digital slime closing in on you. Above is the maze of corridors, with occasional loop-exit-entrances, which let you cross from side to side. This creates a temporary dead zone that lasts for about a second and disables the ghosts’ ability to attack, but it also renders your power pellet null and void. 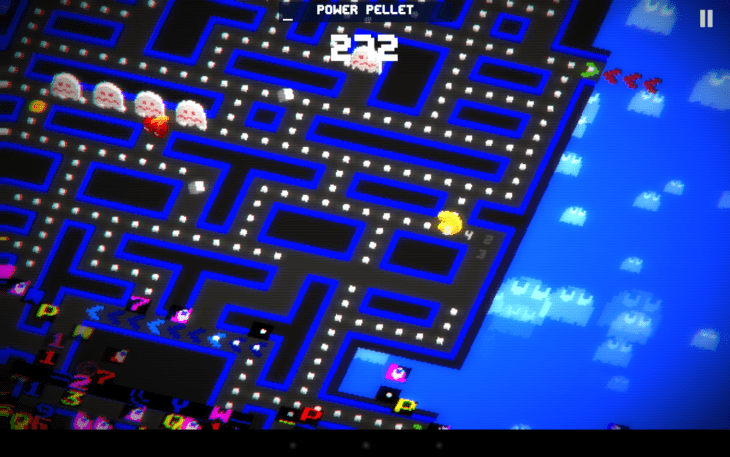 The endless character of the maze also makes it impossible to learn the routes, ins and outs by heart – you just have to adjust and do it very quickly. This new take on the old game makes it more of a frantic reflex-based endless runner than a strategically thought-through experience. However, there are some things you can still learn to use to your advantage, if you are a hardcore Pac-Man fan, of course.

As with the original, there are fruit pellets scattered all over the maze, and they boost your score of cheese-gobbling. The titular ghost specters Inky, Blinky, Pinky, and Clyde are still there (I hate you, Pinky!), and it’s exactly the ghost moving patterns that you can and should learn to avoid being gobbled early on. You will need to keep looking what’s there above you and memorize the patterns of the ghosts’ routes. 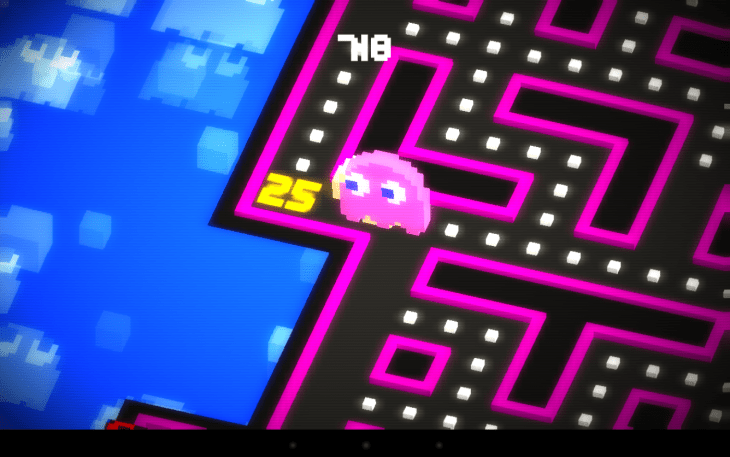 While the original game saw you clearing the board, the endless nature of Pac-Man 256 takes that mechanic away and lets you focus on gobbling up as many yellow dots as you can, and once you gobble 256 of them, the game clears all the ghosts on the visible part of the grid. Another objective here is to eat the power pellets that traditionally turn the nearby ghosts blue and edible.

The ghost spooks have also received a make-over. So, Spunky is in the sleep mode until you pass him by, Funky and Sue are now making the entire chains of ghosts that move according to their horizontal patterns, and if you should gobble up a power pellet – these guys are a delight to munch on and get the points boost. On the other hand, when there is no power pellet or power up handy, and these dudes are on your tail, not so good, but they move relatively slowly. Which can’t be said about the rapid Pinky or a persistent Blinky who will chase you down for as long as he can and that sport takes the shortest route. Clyde moves vertically, that is up and down. That is why it may not be such a bad idea to stop and hug the wall once in a while – to observe the pattern of the upcoming ghosts or to let them pass you by without noticing you, and sneak behind their backs. 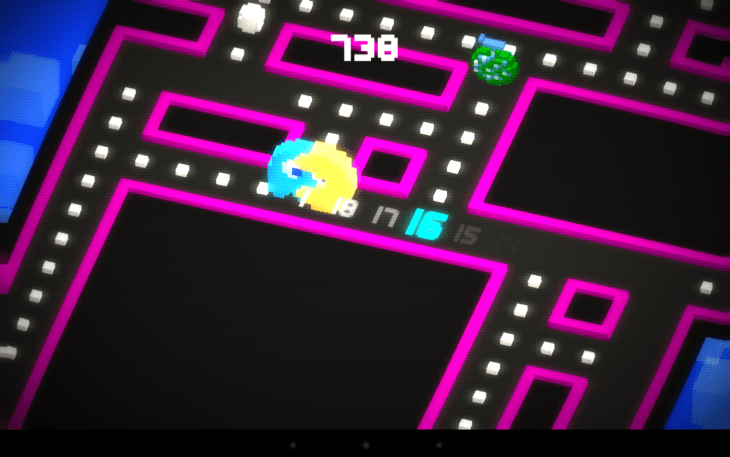 Pac-Man 256 brings power-ups to the table, which make the game a lot more fun, in my humble opinion. Ever felt like frying Pinky with a laser? Or growing your Pac-Man into a giant blob (the one on the Pixels poster) and gobble them all? The game adds quite a variety of power-ups to the traditional bombs, but you can have handy only three at a time. And here is a catch with the power-ups – you can play with the power-ups only at the cost of the credits. If you wish to play for free – you play without power-ups. But more on that in the IAP section.

There are conveyor belts that either slow you down or speed you up, depending on where their arrow points. These can be very useful in times of chase because if you tread on the conveyor belt that moves against you, it will slow you down, but it will also stop the following ghosts altogether. Then, you can freeze, fry, or erase the devilish ghosts by a tornado – all of which adds a lot to the variety and fun factor, but also the spending. Here it comes. 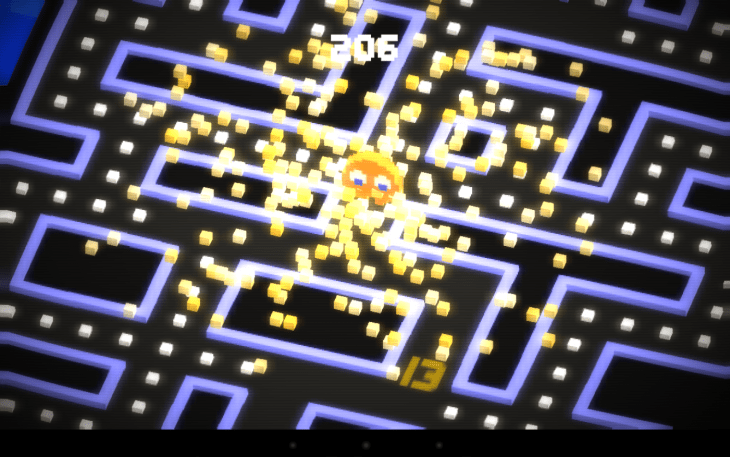 One critical difference between Pac-Man CE DX and Pac-Man 256 is the price. While the former is a no-IAPs premium game, the latter is freemium, which obliges. You can play for free without power-ups, and how far you can go without them is totally up to your skills and fast reflexes.

The game implements a classic freemium method – lives, or credits. You begin with 6 of them, and they regenerate at the rate of one credit per 10 minutes. You need a credit to continue playing once you die. You can also skip that option and start from zero, of course. 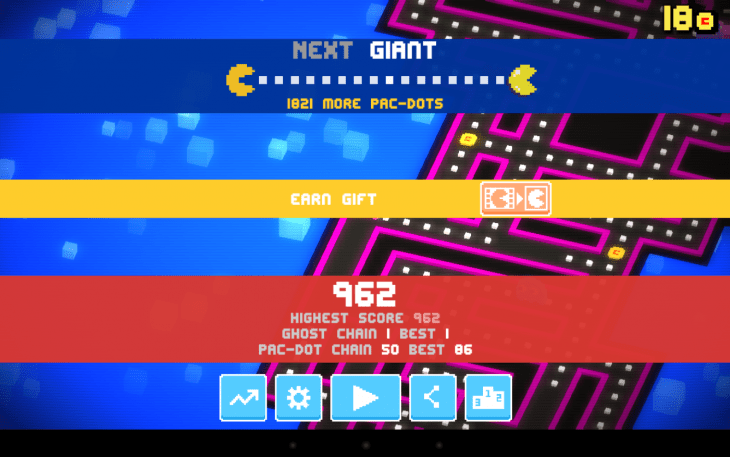 There is also an option to watch video ads to get more credits. If you suck at playing this game, you will run out of those six credits pretty fast and once you exhaust those video ad options, you have to wait, or buy. The best option is a $8 unlimited credits pack for life. Now, I would not say Pac-Man 256 is worth $8, but the hardcore fans may disagree and I’d understand them, but would still disagree about the price/value ratio.

There are other options, like coin doublers for $5 and the like, which too seem a bit overpriced. That said, you will most likely face two ways – play for free, exhausting the free credits as they come, and quitting once they’re spent. This is quite enough for casual playing. Without the power-ups, you won’t make it long enough to score well. Or, the second option is to buy your way out of the credit system and dig deep with the power-ups and the clever scoring system. This is the hardcore Pac-Man playing. Either way, the game offers lots of fun. 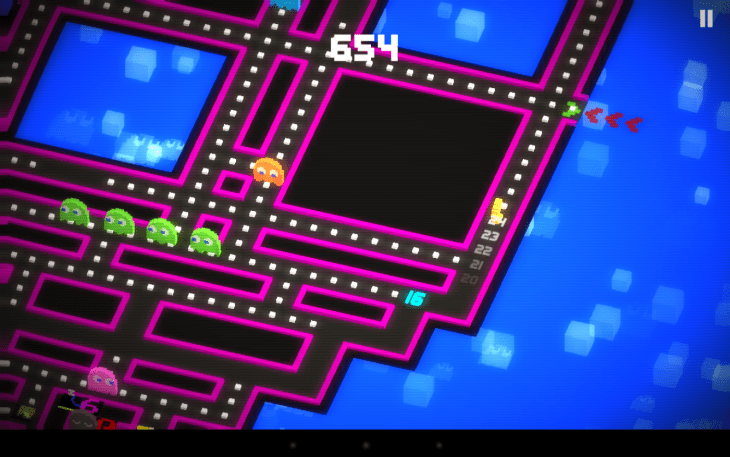 It’s a curious mix of Pac-Man style with the Crossy Road style, and the result is spectacular. The game is colorful, acid and eye-pleasing, and topped with the smart decisions that alter the gameplay just enough to make Pac-Man relevant again, it’s a worthy incarnation. I am missing the catchy music, though.

That said, the landscape mode seems more convenient than the portrait one because the latter may clip the edges and render some critical parts invisible, which is important when you use the warp tunnels to the other side of the board. On the other hand, the landscape mode does not let you see too far ahead, so you either compromise on the perspective above, or the visibility on the sides. In the end, it’s your choice.

The game implements swipe controls, and supports external controllers, too. In my experience, I have noticed a fluctuating lag in the way the game registers the swipes, but I wouldn’t say it’s frequent. I haven’t found similar issues in the user feedback, so I am assuming it’s nothing to worry about. 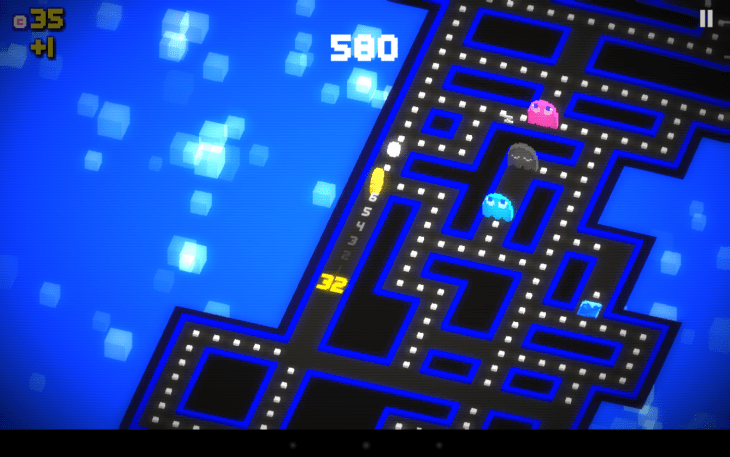 The game is good – frantic, vibrant, hilarious, with a few new ideas quite well implemented. However, it’s a very decent time killer for short gameplay sessions. I do not see myself investing a few hours straight into the gameplay, even with the credit system eliminated via IAP. Still, it’s the one to keep on your device for whenever you feel like playing a quality Pac-Man game, which is also very well suited for the mobile platform. All things considered, Pac-Man 256 offers a decent replay value for short gameplay sessions. Things may change if you set it up to play on a bigger screen, like Android TV, with controllers. 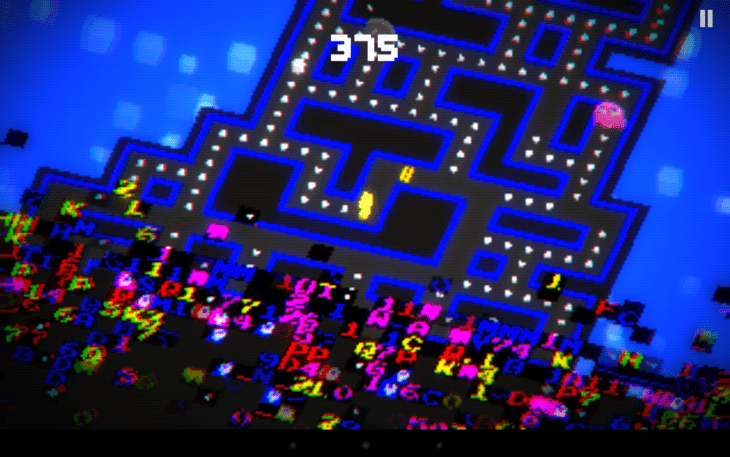 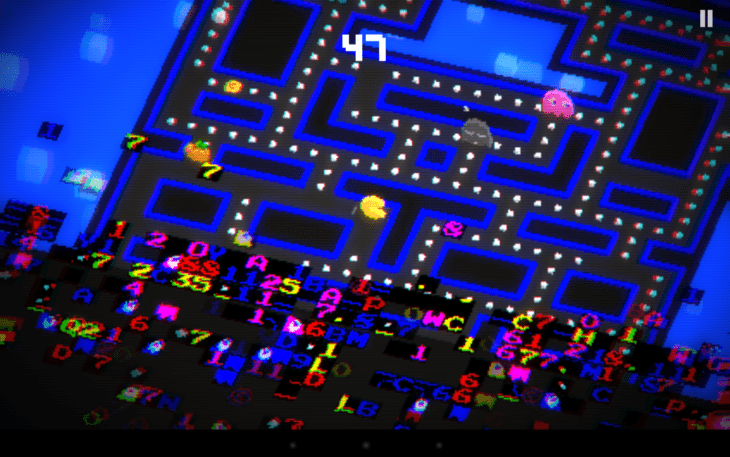 Pac-Man 256 Endless Maze feels natural on mobile, with the loads of new and fun content. The lasers rock; the ghosts are fun; the pace is frantic; the challenge is marvelous; the power-ups add variety. With the simple swipe controls and the still familiar gameplay, it offers a good replay value and lets you play for free, even though you are unlikely to get too far with the free credits. Whether or not the no-credit game is worth $8 is totally up to you. I’d leave it as a free casual time killer without digging deep the IAP options, and invest in Pac-Man CE DX, if you ask me. That said, Pac-Man 256 is a very decent game, which proves that decades old franchise still rocks thanks to the wise decisions of the seasoned developer Namco and some fresh blood from Hipster Whale.