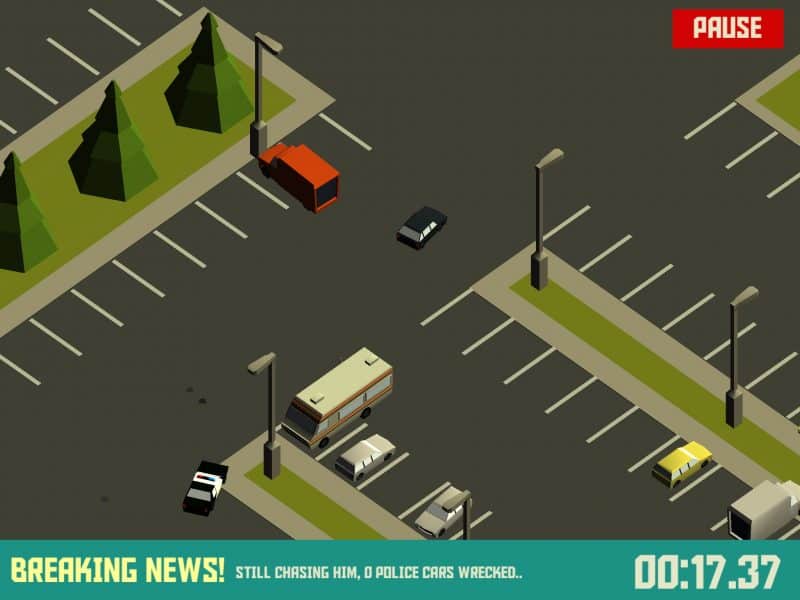 Some of the best mobile games come in the form of a 99 cent gem, that unexpectedly becomes one of the most played games on your mobile device. There’s usually at least one game like Pako: Car Chase Simulator that comes out every week, not necessarily a car chase simulator every time, but a small yet addicting game with basic concepts.

With that said, Pako is one of these games that stands out to me, because of the great twists the developer incorporated in each level. Even though there isn’t much to keep players coming back as far as actual rewards go (new skins, unlock-able levels, etc), the battle for top of the leader-boards, and overall addicting nature of this game will be enough to keep players on the hook.

When it comes to mobile games, there’s not as much of an emphasis on high-end graphics. The real key to perfect visuals is uniqueness, smoothness, and variety. Furthermore, when you have a game like Pako that has extremely basic controls, as well as an overall basic concept — it’s more about creating an environment the player is comfortable looking at for a long time. As far as I’m concerned, this game has done it’s part in creating several appealing environments, and offers just the right amount of visual variety. It’s not that Pako looks astounding, but the graphics suit the gameplay very well. 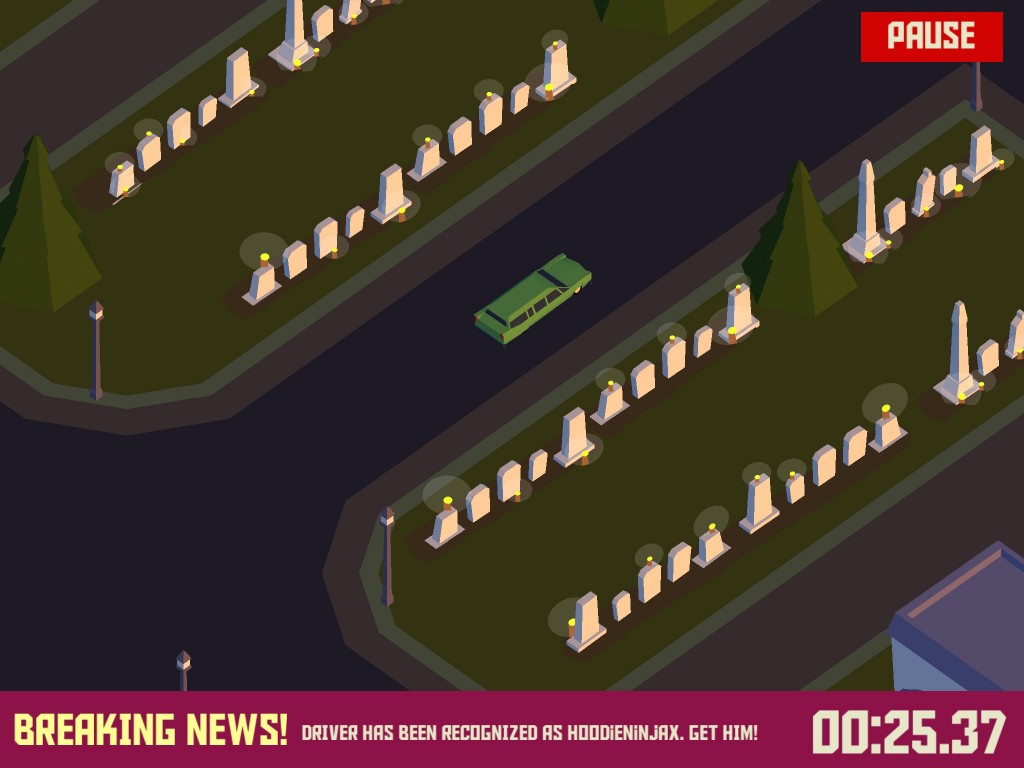 Still, there’s some things I’d like to see fixed, as well as added to the game. First of all, there were a few brief hiccups I encountered while playing, that caused a very short lag spike. It didn’t happen every single game, and it was no longer than a second, but there were a couple of times it caused me to crash as the game goes completely unresponsive during that second. This was frustrating, and definitely something that needs to be fixed before I can merit Pako with perfect visuals. I’d also like to see some skins that you can unlock for each vehicle — this wouldn’t require an entire currency system, but possibly meeting certain milestones that unlock new skins.

My first reaction to Pako was decent, but I didn’t feel like it was anything really note-worthy right off the bat. However, once I started playing some of the other levels after the first, my outlook on the game began to change. I had expected the entire gameplay to remain the same across each level, just with a new map, but it actually changes quite a bit. There are five playable levels in the game, and each puts you in control of a different car with it’s own pros and cons, and you’re on a different map as well. Each level has the same goal, avoid cops and go as long as you can without crashing. However, they all of their own little twist that makes it challenging in a new way.

The most unique maps are definitely the cemetery and the highway (although the final level adds tanks into the mix). First, there is the Mall, which is a pretty symmetrical map that puts you in control of a very balanced vehicle. Then you head to Suburbia, where you get to drive a speedy muscle car in a small neighborhood with a lot of short roads. Next, you’ll drive a slow limousine through a spooky graveyard, with zombies emerging from the ground — you can actually drive over these zombies for bonus points. 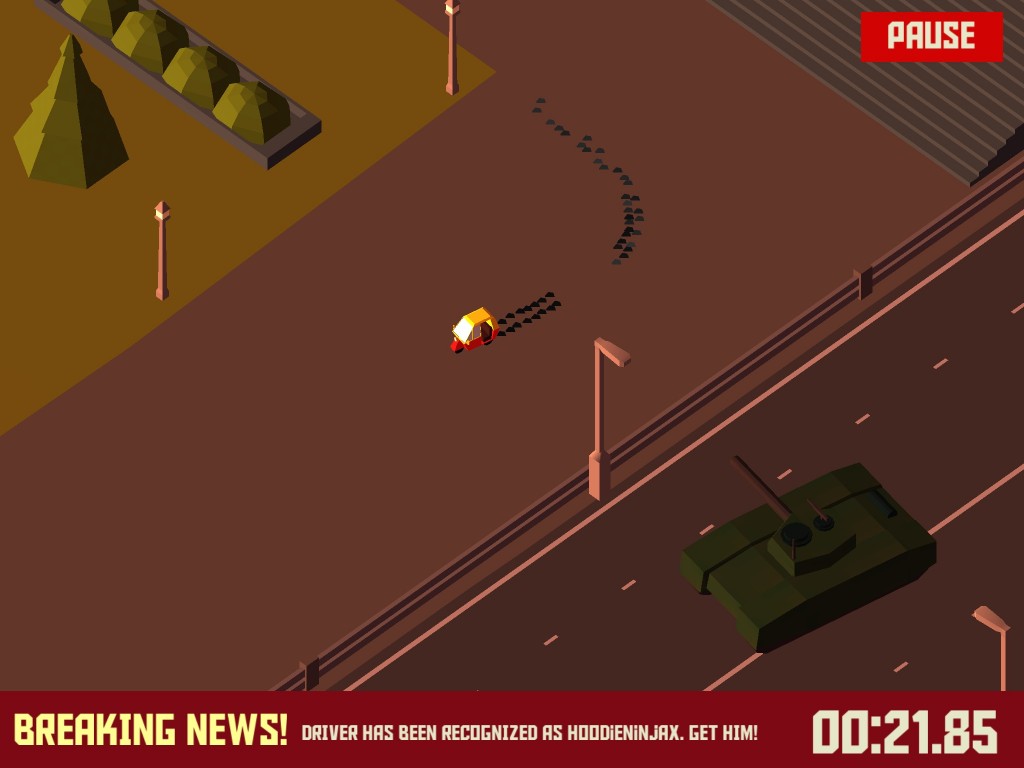 Fourth is the Highway, which features another pretty balanced car, which is a bit slow if anything. This level has you driving through a busy highway trying to dodge plenty of obstacles, busy traffic, and as always, cops. The last level is the Square, where you drive a tiny car that drives and turns immensely fast, and you need to dodge not only cops and traffic, but tanks that are firing at you.

Pako has really simple controls, just hold tap the left side of the screen to turn left, and hold tap the right side to turn right. There is no acceleration or braking, and the tap area for each direction is plenty big enough. In-game, there’s really no Interface issues — mainly because there’s really no room for interface issues, but no harm no foul. I didn’t really care for the main menu, as all of the levels are spread out in a way that makes them not so easily accessible. Overall, it seemed as though the menu structure could be a lot easier to navigate and understand. 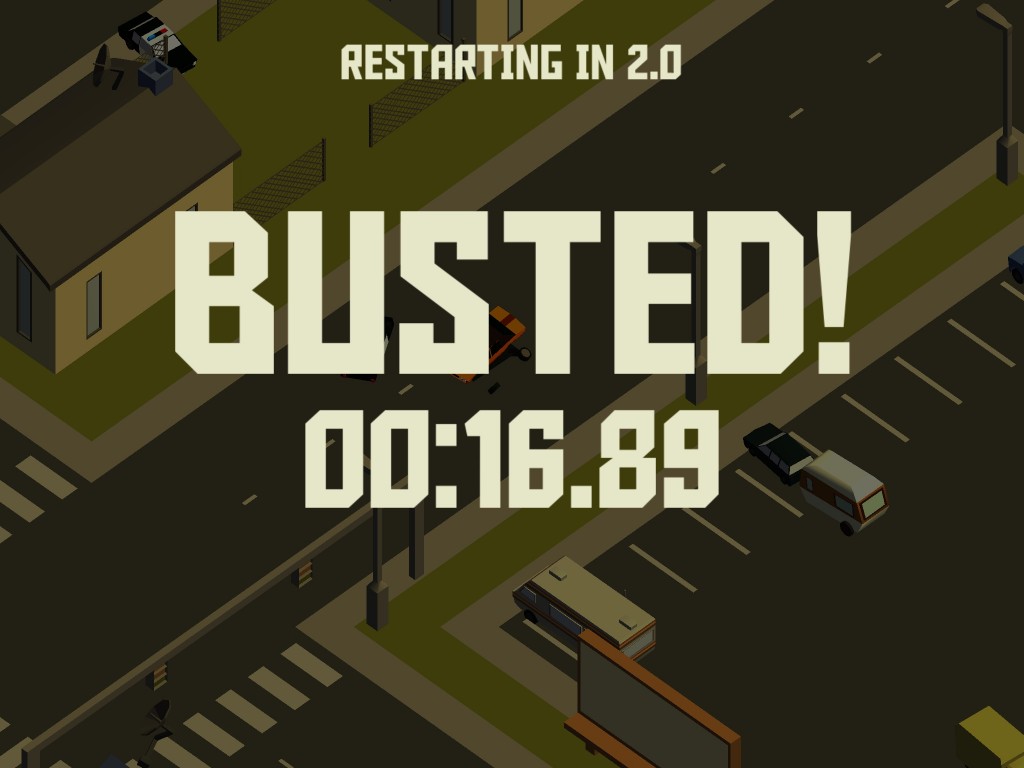 Another minor issue I had was that the game always restarts in 2 seconds after you finish the previous round. This helps keep things moving along, but I don’t see why this is a forced restart, and I’d prefer it to be a “tap to restart” instead. Again, these are just minor things, and a lot of it is personal preference — so I still say the Interface is great.

Right from the beginning, you’re given access to all five levels in the game, and there’s really no extra content other than the different levels. It’s nice to see a game that actually gives you all of it’s content straight away, but it leaves you wanting some sort of reward or unlock-able feature for playing the game. Each individual level has it’s own global high score which you can compete against, but that’s really where it ends as far as things to work towards in Pako (with the exception of the Game Center achievements). 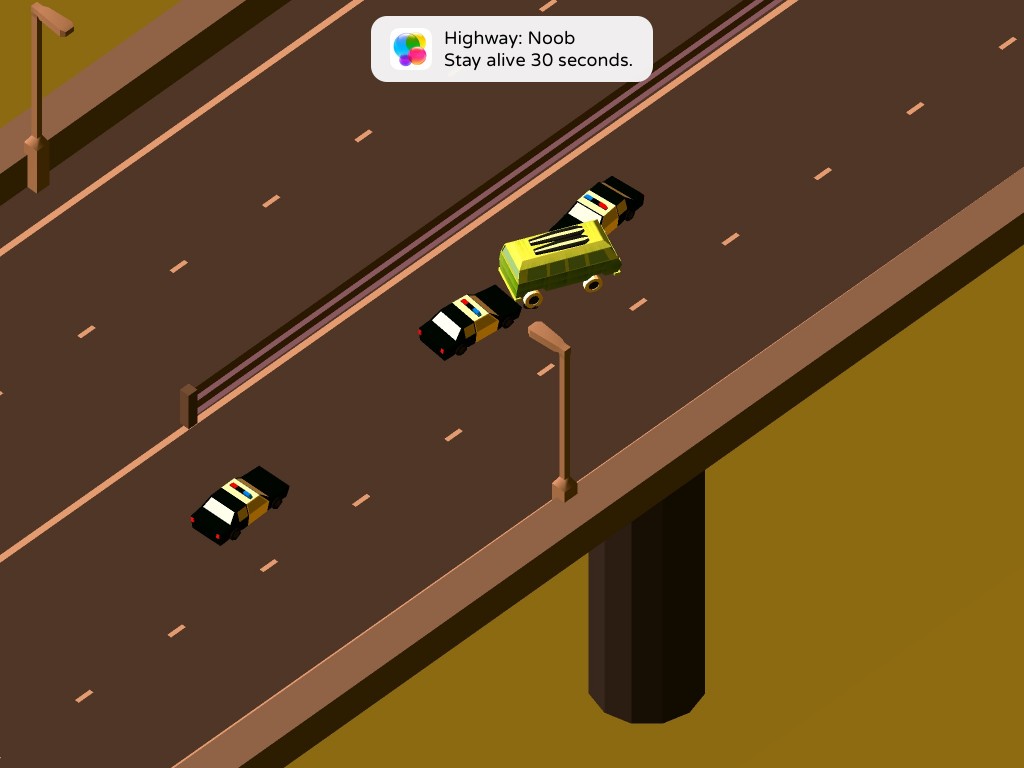 I do think the developers are on the right track with keeping the game simple, as there are tons of different things that could have been implemented to change things up and make it more complicated (car stats like handling and speed, locked levels, car skins, etc). However, I don’t think it’s necessary to completely remove all of that from the game, as everyone enjoys the feeling of unlocking new content.

With games like this, there’s a factor that makes it work, and that’s the “just one more try” factor. It was the primary reason Flappy Bird became so popular, and many other games like it. Pako has this factor, but not to the extent of other similar games. To me, it still needs a very simple, basic unlock system in addition to it’s try again factor. It is a challenging game, and I found myself struggling to improve upon my high scores for a while, so there’s also the line between addicting and frustrating that must be drawn.

This week didn’t really offer too much as far as new games on the App Store, but Pako was certainly one of the standouts (along with Sentinel 4). If you enjoy simple yet addicting gameplay, battling for high scores, and running over the occasional zombie — Pako is a game worth checking out. It’s only a dollar, and provides you with hours of entertainment.

Make sure you leave us a comment below and share your opinion about Pako, and our review!