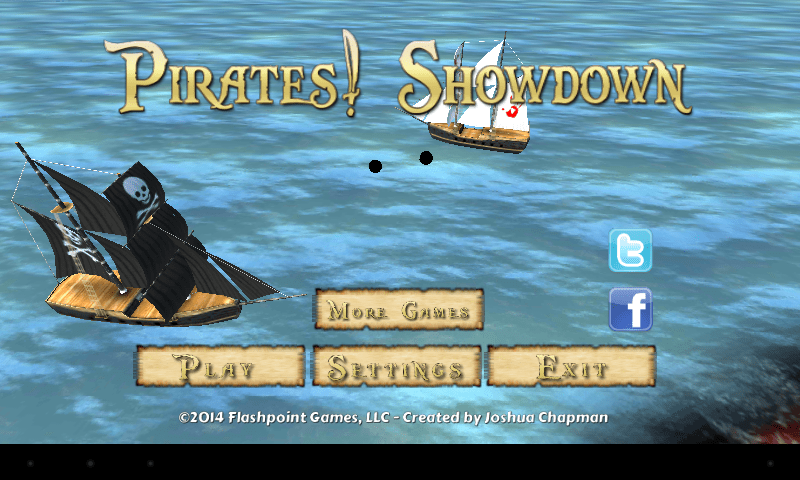 Pirates! Showdown is a paid Android game gone free, and it’s worth checking out for its fast-paced, intense shooting, attack, defense and strategy – all blended in an increasingly challenging and highly addictive game. It scored one of the top places in the best Android games rating, so let’s see what this little treasure chest holds for us.

You play as a pirate in command of an entire fleet of pirates, and the more gold you have, the more pirate ships you can produce, hence, the more cities and villages you can conquer. However, you must battle the English ships, so you will face inevitable loss of towns and ships once in a while.

You have several towns at your disposal, and as you earn gold, you can increase your towns’ ability to generate gold, so upgrading towns is essential.

The water area is outlined by vertical lines, so you find your whereabouts and navigate along the area easily – your towns are at the bottom, your enemy towns – at the top. 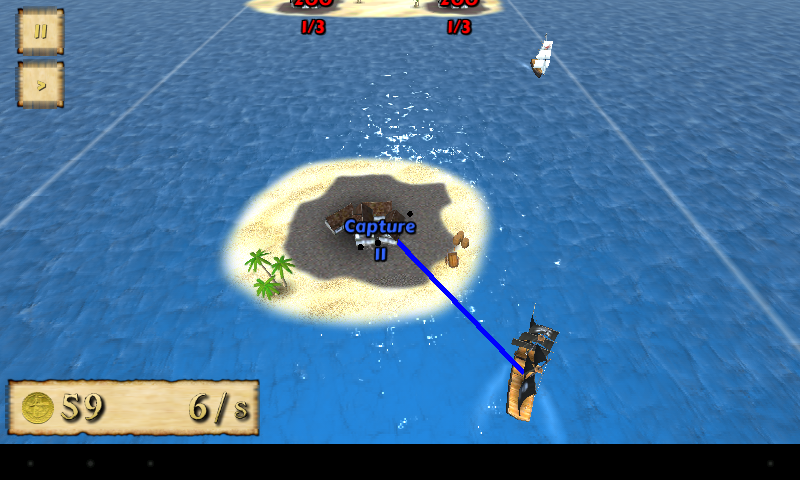 Each level is really fast, so you won’t have time to have a cup of tea while your ships battle for yet another fortress. You can produce more ships once your gold supplies are replenished. You also generate more gold as you defeat the English ships and conquer ports and villages.

Each level has five difficulty modes – easy, casual, normal, hard, very hard, while there are overall 75 campaigns spiced up with randomly generated maps. 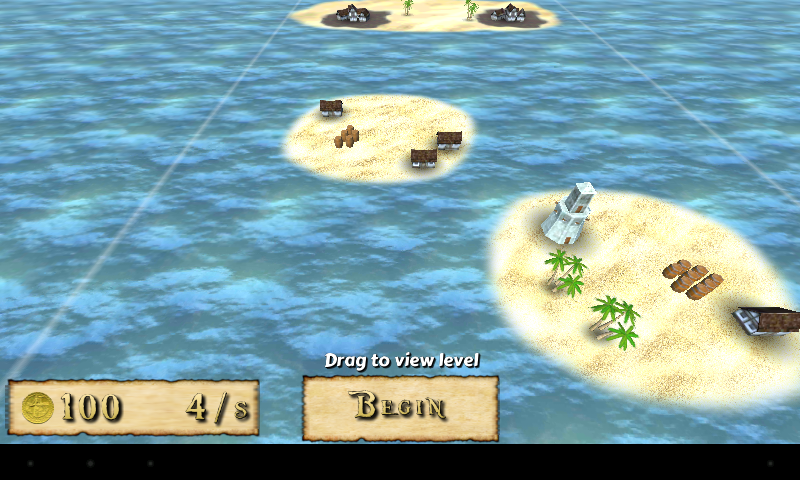 You have to intercept enemy ships, lay siege to ports, towers, lighthouses and villages, create a powerful pirate armada and generate gold, more gold! As you progress, you can even hold your defense long enough to generate enough gold to build a super large ship of the line. The more land you capture, the more gold resources you have, the faster you can build up your fleet. However, on the more difficult levels, your enemy becomes more powerful, too, so the Brits can potentially generate more ships in a shorter period of time than you. Hence, you need to upgrade your towns so they produce gold faster.

It is up to you how you go about it – you can be overly aggressive, capturing towns faster, but you will need a lot of ships fast. Alternatively, you can capture one or two towns, wait for the gold, and invest in your towns, so that eventually you can build even more ships, and even the ship of line.

The two skirmish modes offer an endless number of random maps for frenetic shooting and fighting. 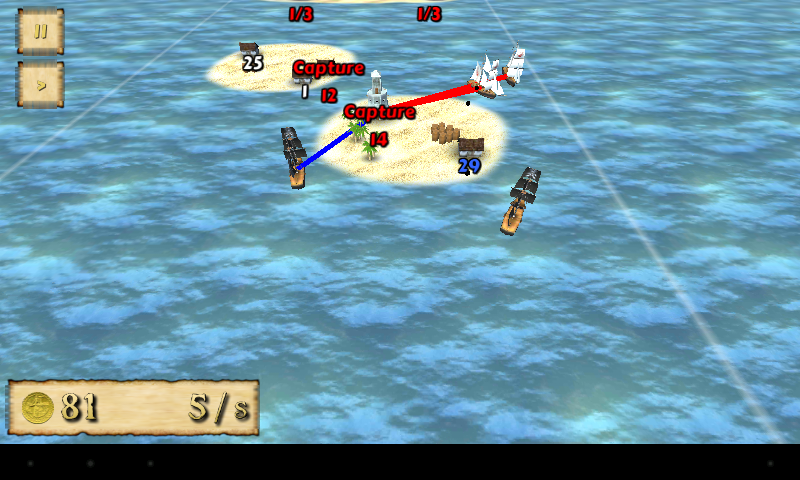 The visuals are quite simplistic, but colorful and vivid, with enough details to understand how to act quickly. Truth be told, the game is lightweight on your device resources, so there are no lags or crashes.

The game sports four different environments from the blue waters of the Caribbean Sea to the mysterious River Stix, Chaos Ocean and the Hades.

The sound score reminds that of the Pirates of the Caribbean, while the play sounds are quite basic – shooting, splashing and the traditional ‘Arrgh!’ 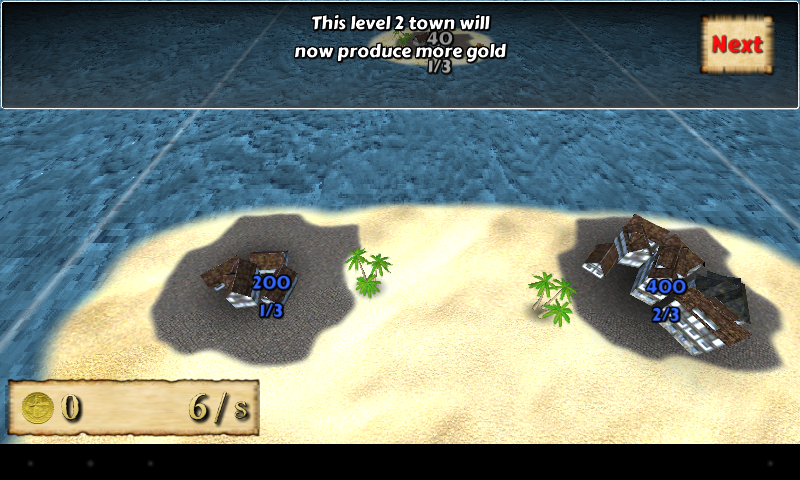 The controls are simple and intuitive – swipe up to send more ships, navigate backwards to upgrade your towns. Your ships engage in a fight once they meet the enemy fleet automatically, so you don’t have to aim and choose your opponents. 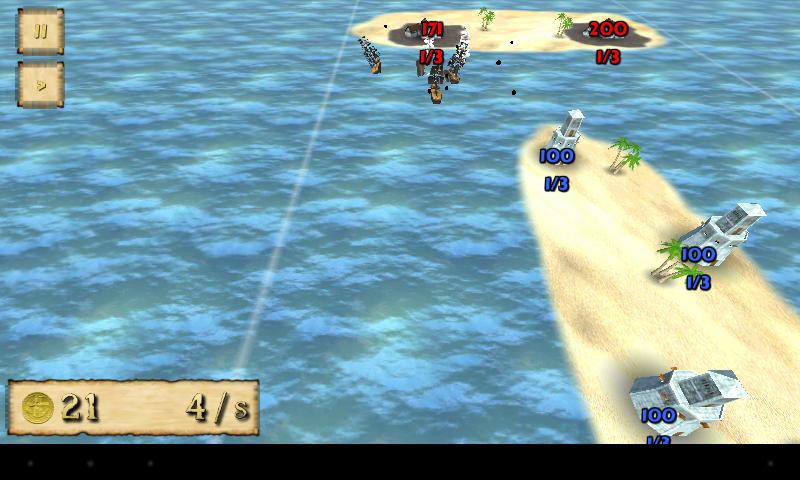 Pirates! Showdown is a neat, fun and entertaining strategy game, perfect for both killing some spare time or dive head over heels into the little world of intense naval battles challenging enough even for the hardcore players. Play wisely, and you can generate enough gold, letting your enemy approach close enough to take them by surprise with a full-scale counter-strike. The game is an absolute delight, providing a great strategy and arcade experience in a simple, accessible way, and once you get the success formula, you will make your way up to the most difficult missions, where it gets really immersive.