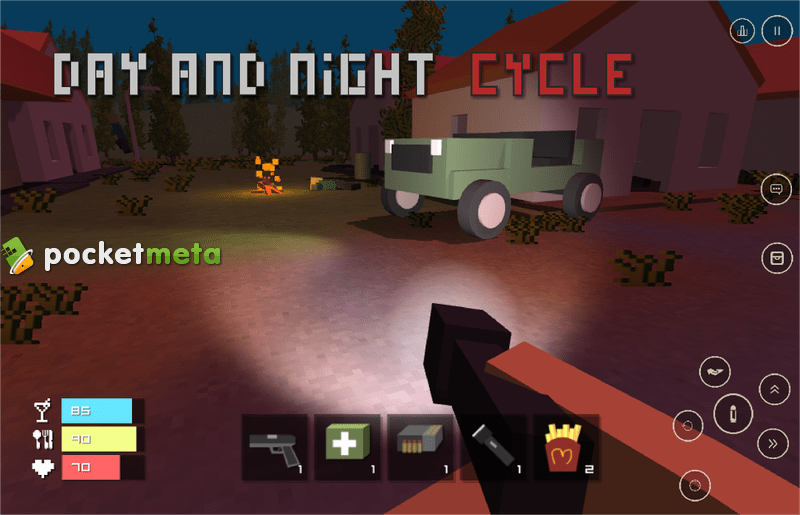 Pixel Z cropped up among the top new paid games on Google Play a few weeks ago, and a few positive reviews prompted me to try it, being the admirer of everything indie that I am. The game is frustratingly hard, but it’s also one of the scariest zombie games I have played. It’s not perfect, and has room for improvement, but the potential is immense. Hear me out. 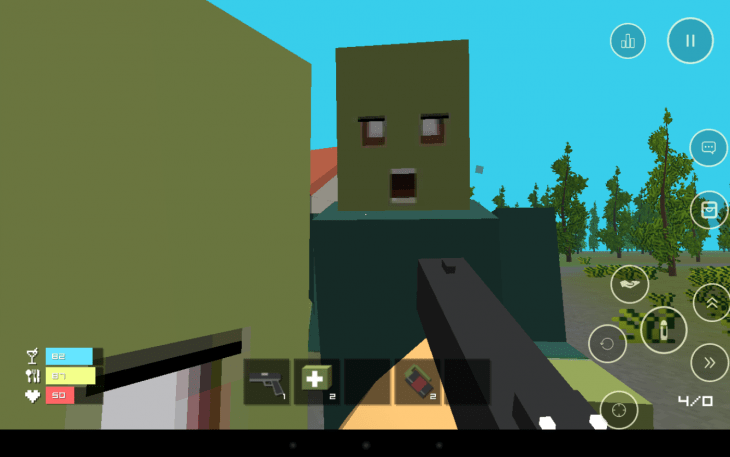 Pixels. Zombies. Guns. Jump-scares. This pretty much sums up the surface of Pixel Z. It’s a “sort of” Minecraft-style open world exploration. Only that the world is plagued by the zombies. If you manage to dig deeper than that, there is a lot more to do than just run around and shoot.

Before you start, you can choose a location and a character and name it as you will. There are three locations in the game – multiplayer Death Match for PVP battles, sandbox for testing out your skills and trying out the game’s mechanics and features, and the Zombie Land (open world survivor).

The multiplayer consists of a limited area where you join a team of kittens or doggies, collect the guns, ammo and health and battle it out against the other players. My attempts at a multiplayer were unsuccessful because I was the only one wandering around the area. Some other players complain about the multiplayer being broken, so it might be the case. However, the other two areas are perfectly playable. 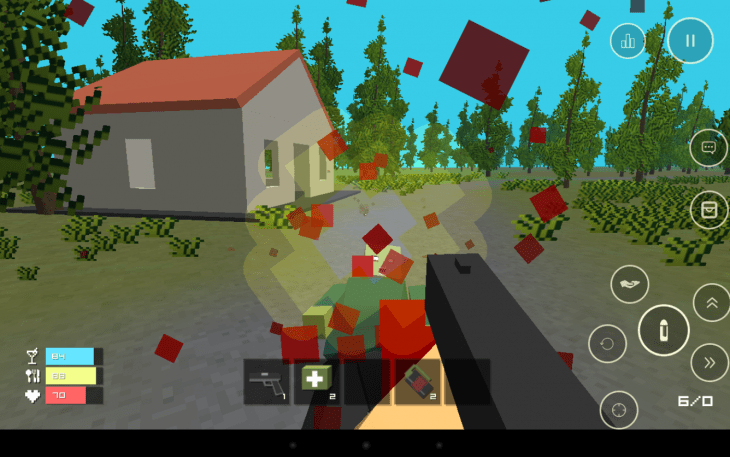 The Sandbox area is a location somewhere in the town, with buildings and cars. You can drive the cars, you can climb the ladders onto the building rooftops and shoot the zombies from there. Finally, the Zombie Land is quite a vast open world to explore. I always begin in the woods, so I am not sure if you can begin some place else. There are structures like farms and shacks in the woods, as well as a town.

Each building is empty inside, but all the area is filled with the little and big things to collect. Wooden planks, guns, ammo, health kits, water, food, axes, flashlights – you name it. These are the things you need for survival in the wild.

You can not only collect food and supplies, but also build things like campfires and protective structures. However, with the current difficulty I am struggling to survive while the building and exploration parts are aside. One cool feature is the day and night modes that come and go quite fast, and the night tends to last longer. 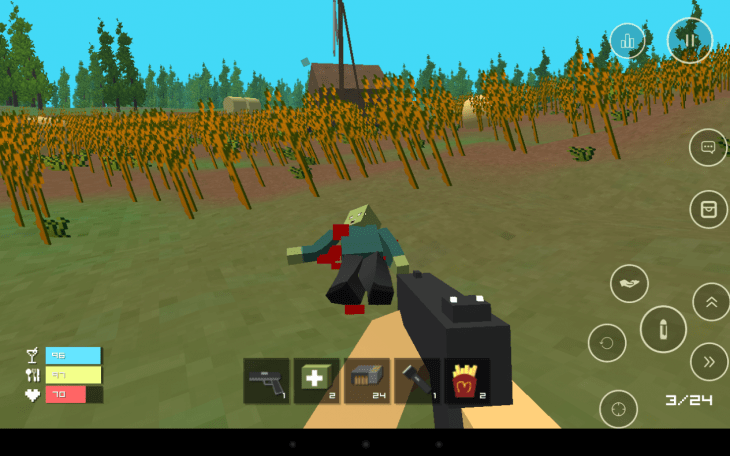 So, you walk around collecting the stuff, and then out of the blue – bam! You see your own blood filling the screen. That’s the one thing that sets this game apart from the rest of the zombie crowd – they literally creep on you without making a sound. Well, they do the arrrgh and oorrrgh sounds, but sometimes they just catch you off-guard. No, actually it happens way too often.

The zombies here are fast and downright crazy. They climb the buildings, they wreck the cars. Worse, they can get on top of you and jump as if you were a bouncy castle! The first time I got caught in a position like this, it took me a while to find where the bastard was. I could see my health bar depleting rapidly; I could see the blood; I could hear his roar very loud; I turned the 360 degrees around myself and still saw no sign of him. And then I looked up and there it was – jumping. 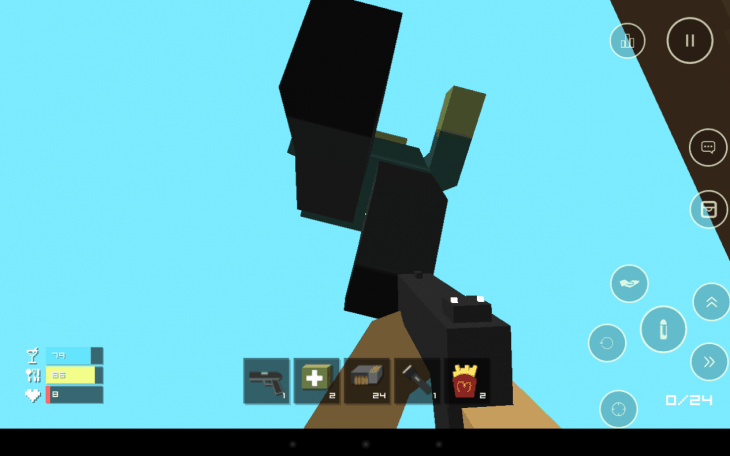 Some are green, others are black, and there are a lot of them. Honestly, there are too many of them so that the mediocre player as myself can enjoy this game. Besides, there are two other problems with the zombies. One – they respawn. Two – they are too hard to kill. Sometimes, it takes three to five shots to the head to take one down, and when there is a dozen of them closing in on you – you’re toasted.

There are some areas that aren’t so crowded, especially the woods. However, the areas highly packed with the loot are where they respawn like mad. When you die, you can respawn, too, all you want, and your bodies will still lay there where you died, with a bunch of zombies munching on them. It’s gross. 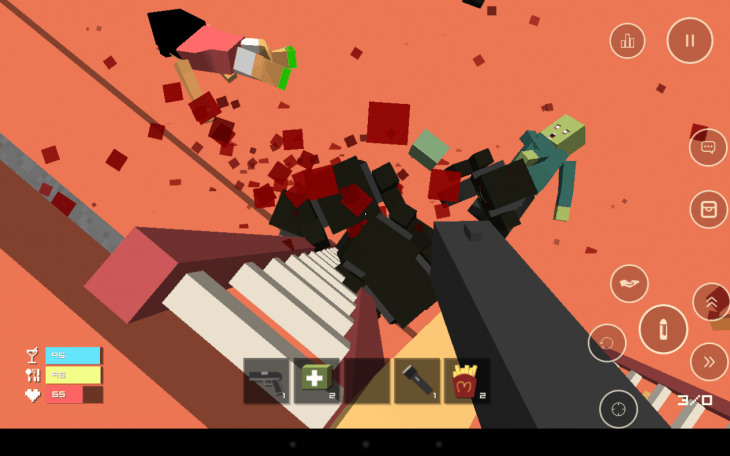 There is only one onscreen control system in Pixel Z, and you need your both hands to control it. Since it’s the first-person shooter, you will be moving, looking around and shooting at the same time.

The area to the left is for the movement. Tap and hold and you will see the joystick appear. Drag it to move around. The area to the right is dedicated to the rest of the buttons. Besides, the right hand will also be responsible for turning your head.

The right-side buttons include the shoot, reload and snipe buttons. There is also the drawer button that, when tapped, opens your backpack’s contents. Notably, the stuff you pick up goes there, but to use it you will need to go to the backpack and tap each item separately to use it. There is also a quick access area for the equipped items at the bottom.

The controls are good, but the lack of calibration option is a disadvantage. I feel the sensitivity is too high for me, so a way to adjust it is a necessity. 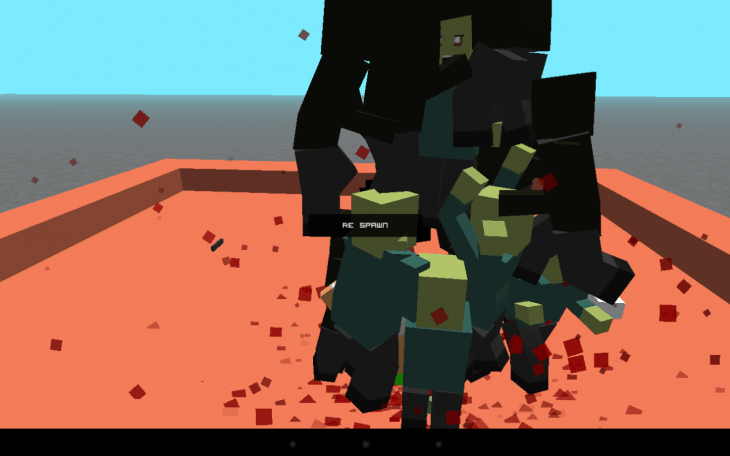 I am not a fan of the Minecraft style generally, so I struggle to find the words of praise for Pixel Z, but that’s me. Moreover, it beats me how huge pixels and dull colors can be so terrifying. The zombies are nothing but the rectangles with two red eyes and odd-moving limbs, but boy do they scare! It’s a paradox I cannot attribute to the sound score alone, but Pixel Z has given me more jump scares within several days than all the games I have played this year combined. I guess it means the pixelated atmosphere with dull colors and awful trees is a success.

I have not experienced any lags myself, but I always die before I make a substantial progress. Respawning makes gameplay even more difficult because the zombies have already figured out there is fresh meat coming this place. Some players reported lags, however.

There is an urgent need of a controls calibration option and an Easy Mode for the rookies. The game is fun, but too hard to be enjoyable for a lot of users, according to Google Play reviews and myself.

Respawning zombies and their numbers are devastating, and I would not mind a third-person view for a change. Getting caught by surprise by a zombie biting out pieces off your neck is terrifying. On the flip side, I know how to keep me busy until the next season of Fear The Walking Dead launches, because I don’t like TWD.

Another issue is the buttons are too small on smaller screens. One head shot should be definitely enough to kill a walker, so again – we are circling around the difficulty options. Sometimes the bottom bar gets frozen, so if you want to use a different item you need to go to the backpack, which is time consuming. 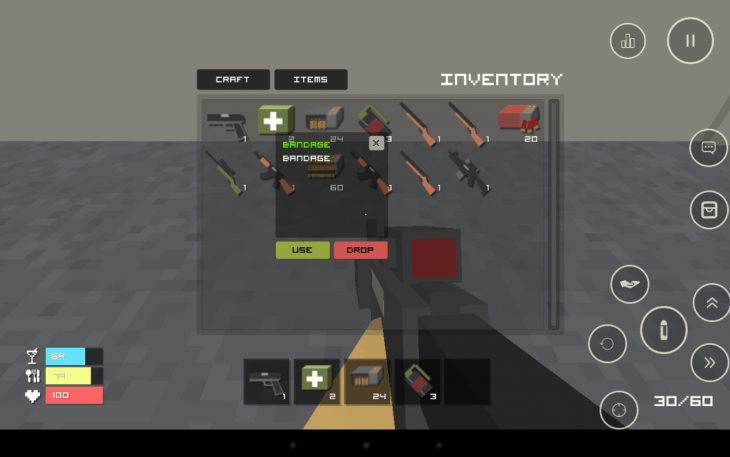 It would be awesome to have the red screen alert when you are under attack and losing health because as of now, you only see the big cubes of red as you start bleeding and it gets in your vision area. Should it be lower or higher, or way too behind, you can simply stay unaware of the attack. Come on, we don’t dispose of the hear and touch sensitivity on mobile just yet.

The food and water are too difficult to find. There is a need of a river where you can replenish your bottle, or a food store or a canteen. Finally, there needs to be a tutorial that explains all the things you can do, such as driving a car. I had no idea those things could drive until I saw someone else do it. Neither did I know I could climb the ladders, so a small intro would be nice. Finally, that multiplayer needs to be fixed. 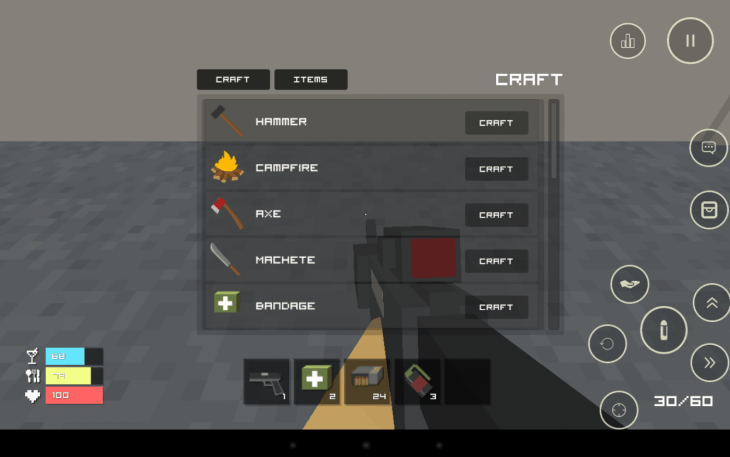 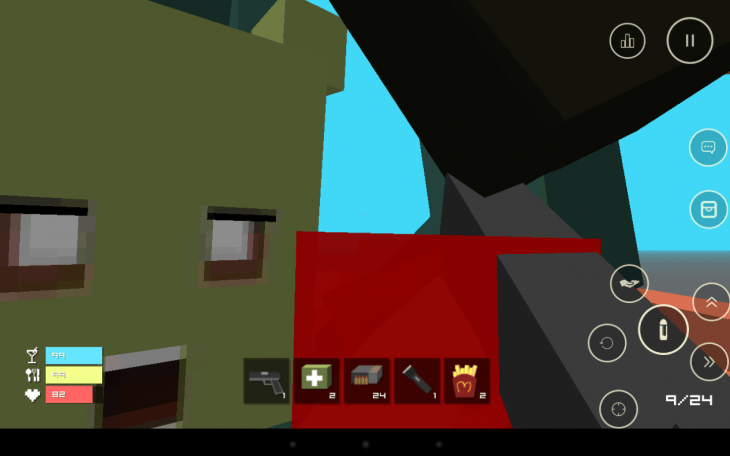 Pixel Z Unturned Day (no affiliation to Unturned or Minecraft) is definitely a game to check out if you like the zombie shooters and the indie side of the spectrum. It is scary as hell and offers quite a lot for $1, although the current price seems to be a discount. However, with the bunch of rough edges and user requests, I would not up the price just yet until the game’s full potential has been unleashed. And there is potential for growth here. The open world and the aggressive dead walkers give plenty of room for entertainment, but the difficulty is hardcore. So, as of now only the experienced and fast users will be able to enjoy it and appreciate all it offers. The rookies will only scratch the surface of Pixel Z Unturned Day. Finally, it must give you quite a few jump-scares because it made my heart skip a beat on many occasions. Luckily, there are no pets in this game. I wouldn’t bear if any animal had to assist in this massacre.