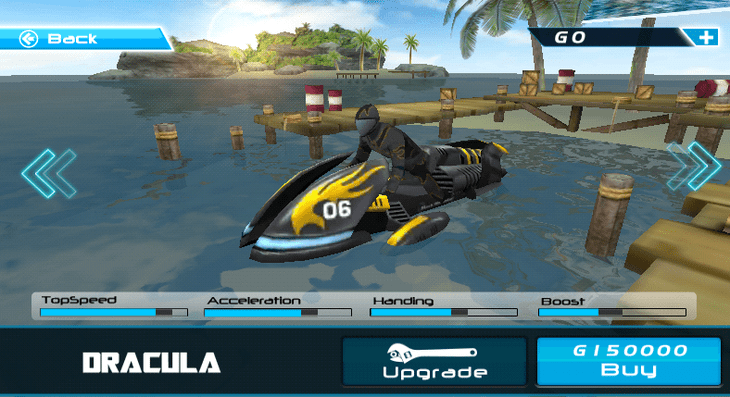 A challenging boat racer, this game has all the rights to score as one of the best new free games on Google Play this week. I was skeptical, since racing must comprise cars, and I am not a big fan of powerboats, but once I saw the game launch, I changed my mind.

You are a hydroplane powerboat racer competing against your super-pro opponents in a water race. 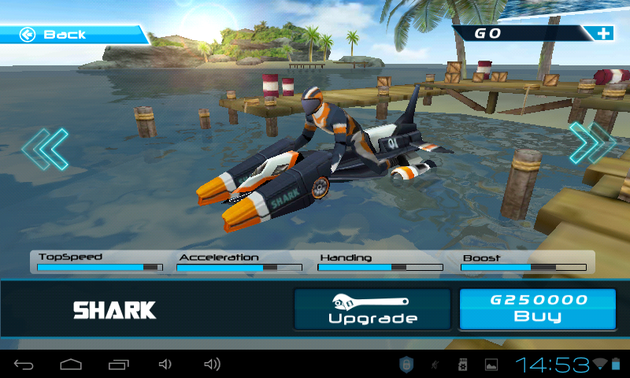 The game offers three modes – Career, Multiplayer and Quick Race. Each mode features a number of series – racing, elimination, survival, sprint; or the Cups in the Career mode, such as the League, Pro-Am, Master Champs, Epic Cup and the Legend Cup.

The game also features a fun Help section, where the game guides you along the water track showing you how to control your powerboat. 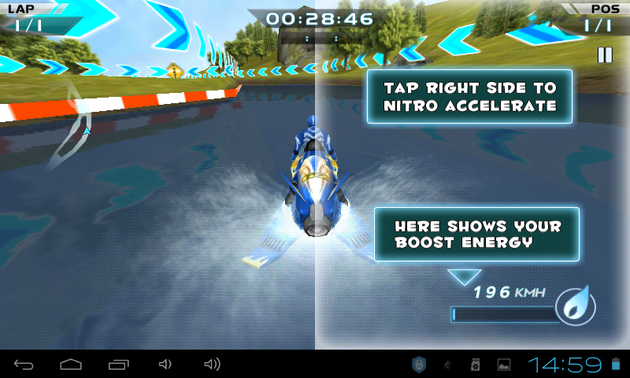 Tap right and your boat speeds up, touch left and brake. The powerboat accelerates automatically throughout the race, but you will need to break at times to avoid smashing into rocks and land.

You have nitro acceleration power ups scattered all over the water tracks, so make sure you catch them, but first you need to master the controls.

Now, the powerboat turns left and right as you tilt the device, which can be both a blessing and a curse, depending on how you like to play. On the one hand, some of you will take time mastering the controls, and thankfully there are Settings that allow you to upgrade or downgrade Sensitivity and Performance levels, as well as the Music and Sound volume. 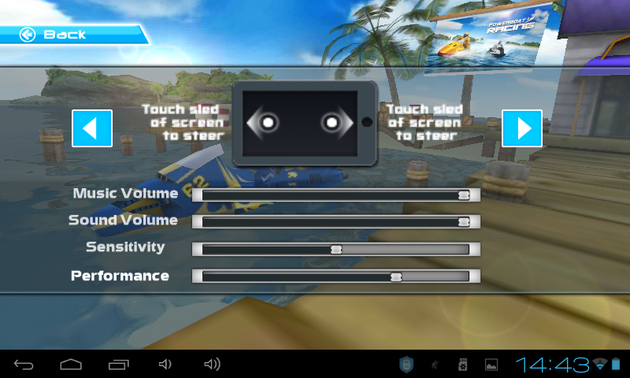 Unfortunately, there is no way to switch from tilt-to-turn controls to the regular left and right control buttons, which are occupied by the Go and Brake buttons, so all you have left to do is train and enhance your skills. I wouldn’t say it can discourage anyone from playing more.

Update: in fact, the tap left and right instead of tilting DOES work, but I needed to re-install the game to make it work.

I counted some 6 unlockable boats that look fantastic, and I definitely want to ride them all. You can upgrade your boats specs and looks, as you race and earn the coins. Alternatively, you can resort to in-app purchases, but that just spoils the challenge. The greatest reward is the victory you earned thanks to your skills, after all. 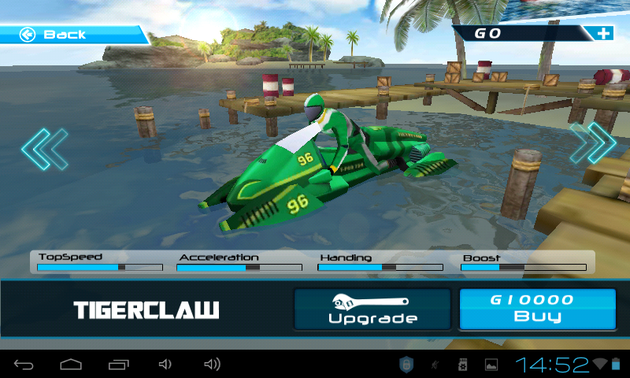 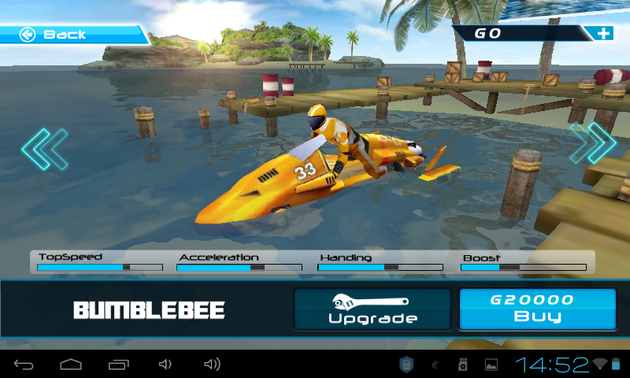 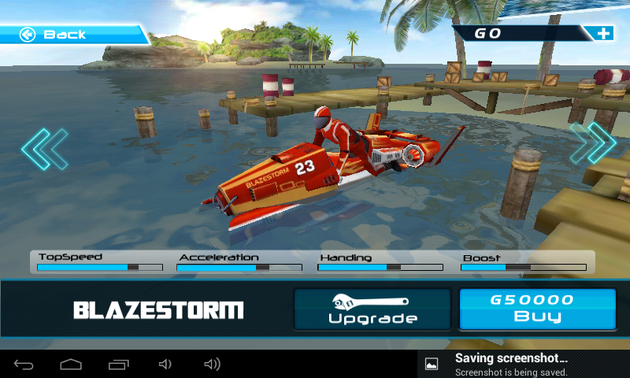 The environment, as well as the boats and tracks are beautifully rendered in 3D, and the result is no inferior to the NFS or GTA. The game is visually awesome, and even though you have no time to focus on the nature, the racing elements, such as the direction lights, power ups and hints, the boats and the water itself are rendered quite impressively for a free title.

The soundtrack is something I would change or add a way to customize it because at some point it gets repetitive, but nonetheless it creates an intense atmosphere right from the start.

Now, Powerboat Racing 3D offers several ways you can upgrade your boats and unlock new tracks. The first and most obvious is playing the free game advancing your skills, earning honest gold and spending it on boats and tracks. The second is buying coin packs via in-app purchases, and the third is installing one or a couple of affiliated apps and games. The latter does not seems such a bad idea, especially if you get some 20.000 coins for installing one free game, so the impatient folks can as well take the bait. 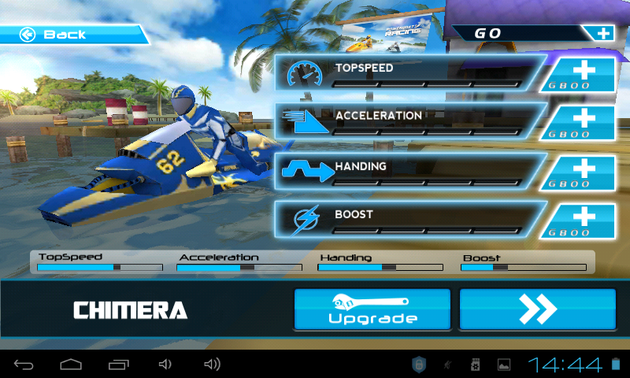 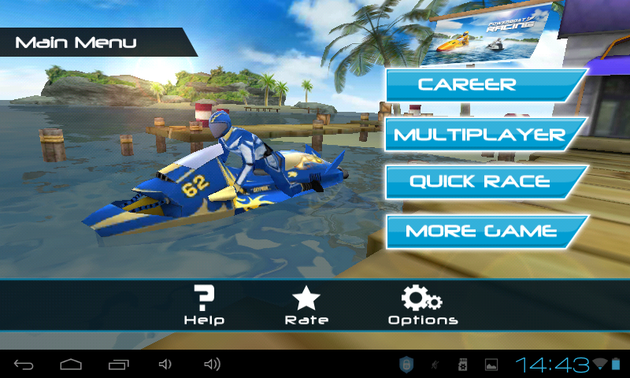 Powerboat Racing 3D is a stellar entry on the Top New Free Android games on Google Play for solid reasons – it is beautiful, addictive, fun to play and challenging to master; even the in-app purchases aren’t obscene or annoying. Gamers are free to choose to play completely free of charge and enjoy the fast-paced powerboat racing set in a number of beautiful environments. The boats are fantastic, and you will find yourself splashing, racing and even diving as you maneuver along tricky tunnels and narrow rivers. Besides being a visually impressive classic racer, it also is a hi-tech adventure. If there was a water-based Tron mobile game, it would look like Powerboat Racing 3D.