I was a huge fan of games like Super Punch Out and Ready to Rumble Boxing when I was growing up, and for whatever reason, I’ve continued to really enjoy boxing games throughout my entire life. This is funny to me, because I’m not a fan of real boxing whatsoever, but the games are always so much fun. That’s why I was excited to try out Punch Hero for iOS/Android, which has been out for about a year and a half now. I’ve read some early reviews that bashed the game a bit, but clearly they’ve made some good adjustments with their updates over the past 18 months or so, as I really enjoyed playing the game.

Upon first glance, I wasn’t too impressed, the graphics were pretty basic and it didn’t seem like the game was going to have too much to offer. However, there’s actually a ton of stuff to do in Punch Hero, but the problem is you’re either going to need to spend some money or devote a lot of time to the game in order to be successful. That’s not to say you can’t enjoy the game without spending extra cash on it, I didn’t pay a cent and I still was able to enjoy playing for quite some time — and it makes unlocking your next costume shop item all the more rewarding. 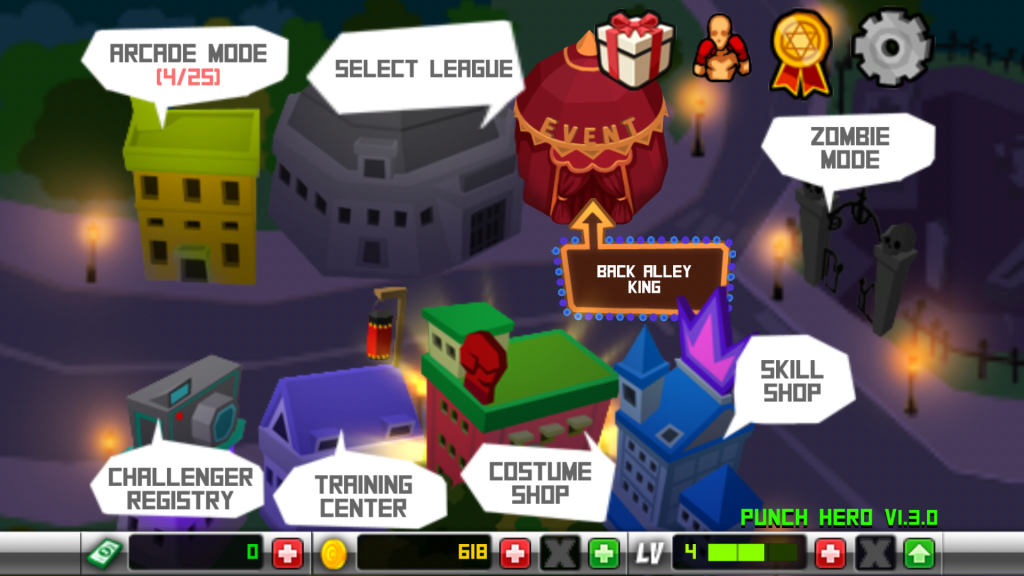 Normally I break my reviews down into specific categories, but I feel like the best style for Punch Hero is to just talk about the game — what I enjoyed, and what could be improved. You can see from the image above that there’s a lot of different areas of the map to utilize, there’s several different main game modes: Arcade Mode, League Mode, Events, and Zombie Mode. Then, you have the Challenger Registry, along with three upgrade shops below.

These shops each offer something different, for example, the Training Center allows you to spend coins or cash on leveling up your stats (Hooks, Jabs, HP, etc), whereas the Skill Shop allows you to purchase actual new abilities to use within the ring. Then of course you have the Costume Shop which I mentioned earlier, these upgrades are not purely cosmetic, some of them actually provide extremely useful stat bonuses, but they do have some that just look awesome too. 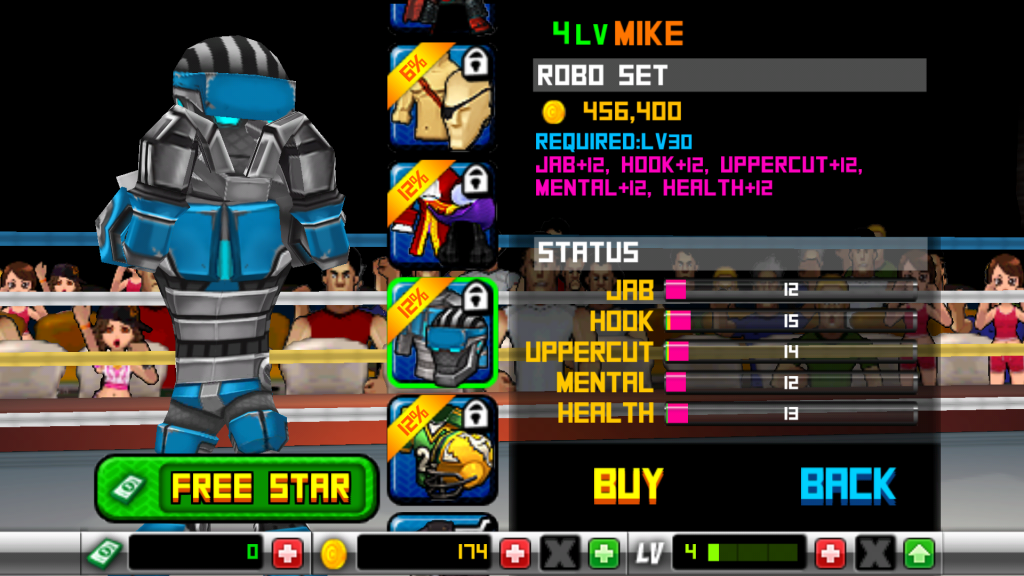 The Costume Shop in Punch Hero

Within each of these shops, there’s a wide variety of different options as to what you can purchase, and honestly these shops are what separates Punch Hero from other mobile games. Obviously not all games are guilty of this, but it’s pretty common to have games with very minimal upgrades, and it’s usually all set out to where you just farm coins to purchase the next available item. With Punch Hero, it’s different, you can actually prioritize which aspects of your character you’d like to improve first, but the game requires you to actively work towards that goal. For instance a lot of items and abilities have stat requirements, so in order to unlock a quick jab ability, you need to have 5 points in your Jab skill.

My main issue with the shops, is that not every item can be purchased with Cash or Coins, it’s usually one or the other. That means you end up being a lot more limited in what you can purchase, compared to what it seems like you can buy at first glance. There are a few exceptions though, in the Training Center you can either spend cash or coins on upgrades, this is nice — but I’d love to have that option in the Costume Shop as well. Regardless, there’s still a lot of stuff to choose from, whether you want to use cash, coins, or both. 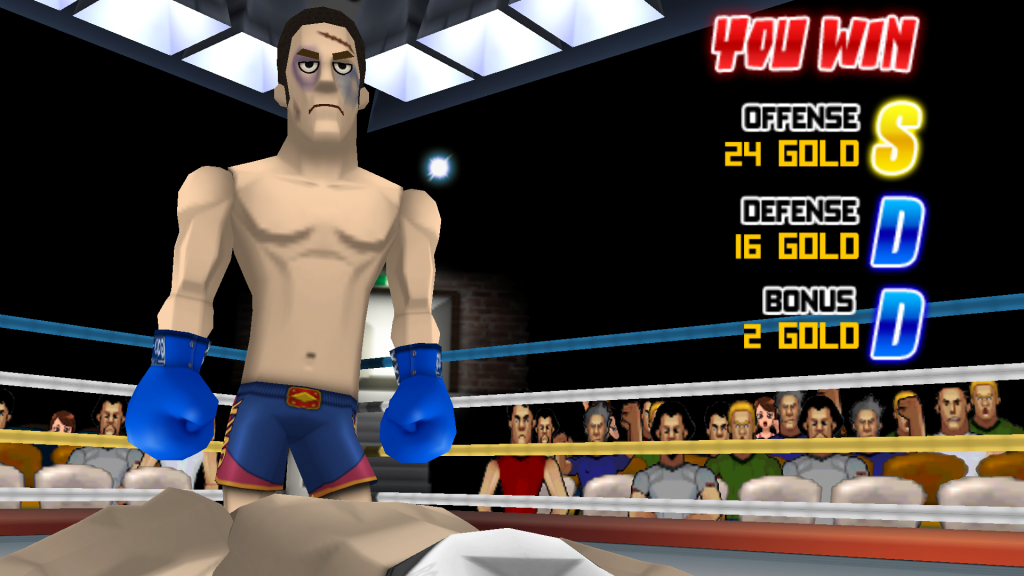 Standing over a recently defeated foe.

As for the actually fighting involved with Punch Hero, it’s pretty basic, but intricate enough to not become boring fast. You’ve got pretty standard controls for a mobile boxing game, dodge left/right, block, jab, hook, uppercut — everything is done by swiping with the exception of dodging. Health is displayed with two colors, one being the health you’ll regain if you make it to the end of the round without going down, and the other being your guaranteed HP. When you go down, you’ll have 10 seconds to tap two areas on your screen as fast as you can and get a percentage indicator up to 100. Obviously, it gets harder to do this the more you go down in a match, and even more difficult if you go down multiple times in one round.

Something I noticed that irks me, is that you don’t seem to get a TKO for three knockouts in a round, this is pretty standard for boxing so I’m not sure why it doesn’t happen in Punch Hero. Regardless, by the third knockout in a single round, your opponent is usually out cold. There’s also the power up factor, which is a small bar that will increase as you fight and can eventually be used to become more powerful in the match. I’d like to see some minor changes to the fighting, maybe a way to regain ‘red HP’ when your opponent is down and you’re waiting for them to get back up. Also, if your opponent goes down three times in a round, it should be a TKO. 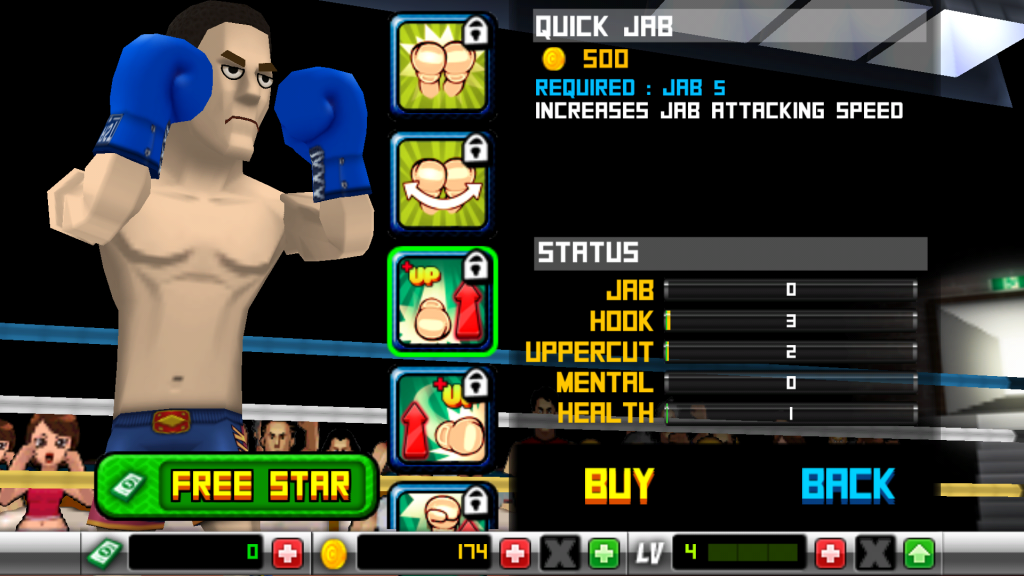 The Ability Shop in Punch Hero

In the end, Punch Hero ended up being a fantastic addition to my phone’s game collection — I haven’t gotten around to trying it out on my iPad yet, but it feels like more of a phone game rather than a tablet game. I love the fact that you aren’t spoon-fed upgrades in a designated order, and you’re able to really customize your character and make it unique. Definitely check this game out if you enjoy boxing games and games with a strong emphasis on unique character customization.

Get Punch Hero for Android

Get Punch Hero for iOS