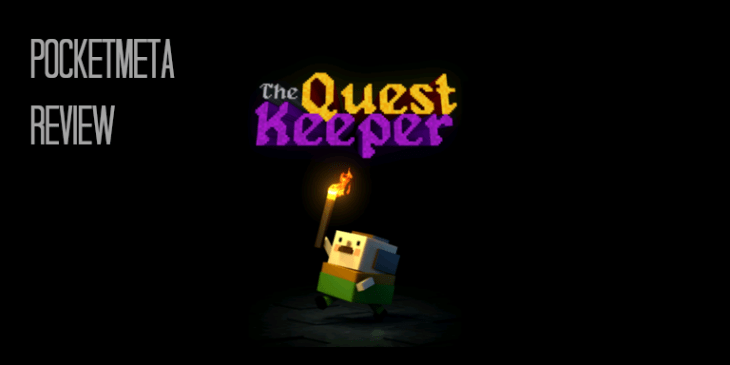 One of the best releases this month, the Quest Keeper manages to combine the hard and the fun, the familiar and the new in an ultimately great gameplay. Created by an independent developer Tyson Ibele, also known for the Bean Boy and Jungle Moose, the Quest Keeper has its own, unique personality and style, immense replay value and that peculiar nag that will challenge the gamer in you.

You play as a block, or as a block that looks like a guy, a ‘lowly peasant’ as the game puts it. At the beginning you face an old wizard who tells you to go find some artifacts he lost, so that’s what you do throughout the game – you scout the dungeons for his artifacts.

The gameplay is hard, not to say overly irritating. The lowly peasant starts moving the first time you swipe the screen, and from then on, he moves non-stop unless:

So, the tricky part is controlling him to make him move the right direction, avoid holes and traps and finally find the said artifact. The latter does bear some significance in addition to the quest you have to undertake to find it. One artifact gives you half a heart, and when you get the second one you get one extra life, which lets you advance further. 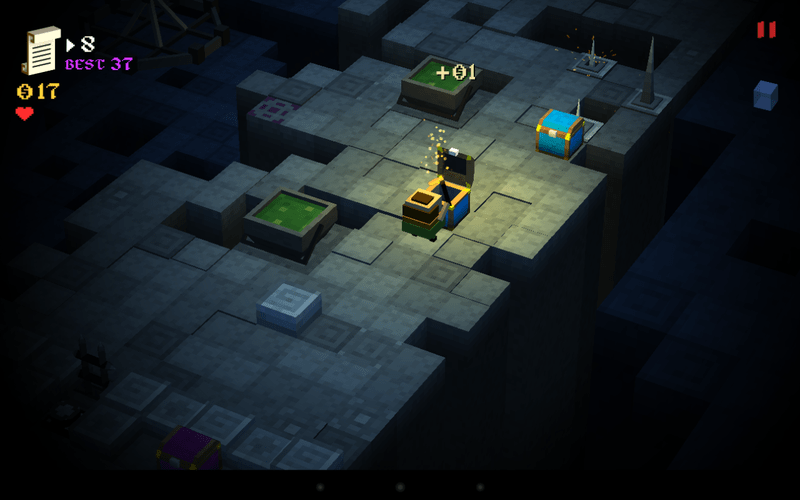 The controls system is the biggest controversy of the Quest Keeper. Since the character moves automatically, and the procedurally generated environments are full of dangers, you will have to swipe non-stop, and pretty fast, to direct him out of the dangers way.

The controls are responsive, but do the swipes get you far? You will have to try and find out how far you can go to answer that question. In my case, not too far the first couple of days when I was scratching the back of my head wondering if it’s me, or the controls. It’s me.

Some users complain to the point of lowering the rating, demanding a visual joystick, which would make the game “playable.” Some even admit the tricky controls might be the point of the entire gameplay, and I agree. 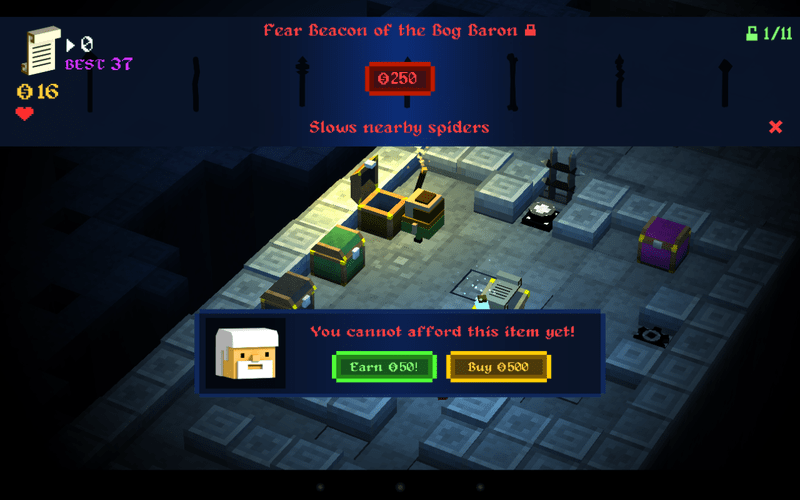 The controls in the Quest Keeper are the cornerstone of the annoyingly hard twitch gameplay that challenges the hardcore-st of them all. All the rest are left to bite the dust.

In the entrance area, where the wizard is, there is a special block that bears the Gear icon, and when you stand upon it you will see the Menu that lets you customize (to a certain extent) the controls, like allow zig-zag movement of your finger, and touch to start moving, turn off the music or buy the ad-free version for $1.99.

Also, there is a gray box under the Pause button, at the top right corner. Tap that to change the camera angle – it’s a game changer.

The Quest Keeper offers an immense replay value. First off, there is the endless mode, or the first quest in the series. You go as far as you can get, and provided the environments are procedurally-generated, you never know what dangers lay ahead. Sometimes, you make it far, other times you die right away.

The system counts the number of blocks you walk forward, and by the time you die it will move the key closer to the Mystery Chest. The number of steps towards the chest is 400+, so you basically need to make that many blocks forwards in your gameplay to open one Mystery Chest. You want to open it because it gives you quite a good deal of coins, and coins you need.

Along the way, there will be treasure chests containing a small deal of coins, so don’t skip those because those will buy you good stuff. 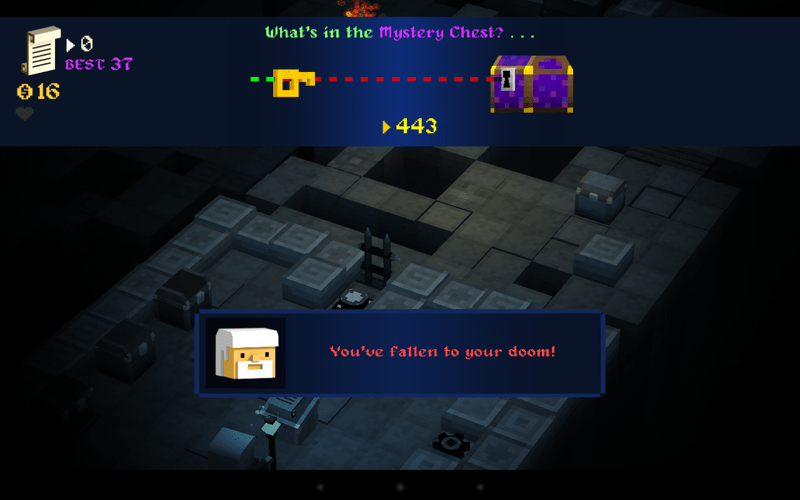 Then, there are some 10 quests more, and they go by funky names, but you can usually guess what kind of traps they offer – spiders, blades, lava, or worse. Each of these 10 quests cost some 250 coins, and these quests, unlike the first endless one, have an entry fee, which is 1 coin. On the flip side, these quests have a set number of forward blocks you need to move to complete them. Each quest has a Mystery Chest and some hidden treasures, which might be hard to reach, but awfully rewarding when you get them. For example, one of the quests has a chest that is impossible to reach unless one of the blocks gets activated and generates a set of blocks around it, so you can come near it.

Overall, there is no way you can finish the game with its 10 quests in one day. A moderately addictive personality like myself is likely to get stuck with it for a good month, or more. It might as well become a resident twitch game for you because you can play it offline.

At the very beginning, in the wizard area, you will see three chests on the left, one on the right, a paper in the middle, a Gear icon box to the right – these are where you can change the outfits, power-ups, quests and adjust controls a little bit.

The paper in the middle is where you can unlock new quests, provided you have enough coins. The good part is you can watch an ad to get some 50 coins you might be missing. It’s a fair offer, so use it to your advantage.

The boxes to the right contain the outfits and the power-ups. Besides the costumes of a bat, a pig, a chicken, a robot, or a spaceman, there is a funky devil outfit and a bunny one, and they cost 150 coins each.

However, these won’t make the gameplay any easier; they’re purely cosmetic enhancements. What is really lucrative in these boxes is the shoes, the magic wands, the cloaks that save you half a heart when you are stabbed, bitten, cut or burnt.

Then there are shoes that let you walk one block at a time! And yes, they are awfully expensive, but I am intended to grind for enough coins to buy them the Crossy Cleats of the Beatnik Porpoise, 2500 coins.

Then there are the Nimble Boots of the Oracle’s Servant, which let you walk on water, and they come at 1000 coins.

Overall, these and other power-ups are game-changing, and totally worth grinding for. 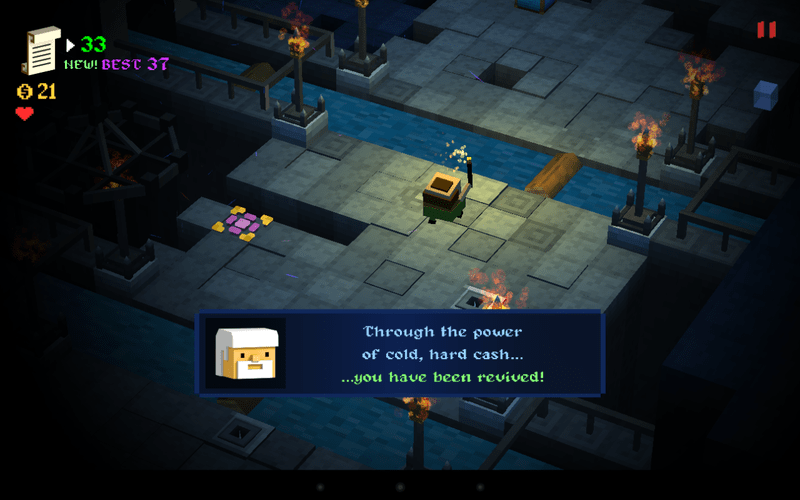 The first thing we suggest you should do when you launch the game is find the gray box in the right upper corner, right under the Pause button. Tapping it will change the camera angle. There are two camera angles in the Quest Keeper – the Crossy Road style, and the regular view from above. The default one is the Crossy Road-style, and it makes my teeth go numb because it is very hard to see where you are going, so I suggest you switch to it when you get the hang of the controls and feel confident enough for an extra challenge.

The other camera view is more user-friendly and offers a more thorough view of the area.

The design of the Quest Keeper is delightful. Despite the superficial resemblance, it is nothing like Crossy Road. Its “voxel” graphics is gorgeous with shades, dark colors, limited light when you walk with a torch and can see only as far as the torch lets you. In this respect, it reminds me of the Wayward Souls – a dark, sinister charmer that kills you more than you would enjoy.

The music and the overall sound score is another reason to love the game – it is catchy, stylish, has its own personality and it’s somewhat silly. Overall, a lot of love and work has been invested in this game and it shows. 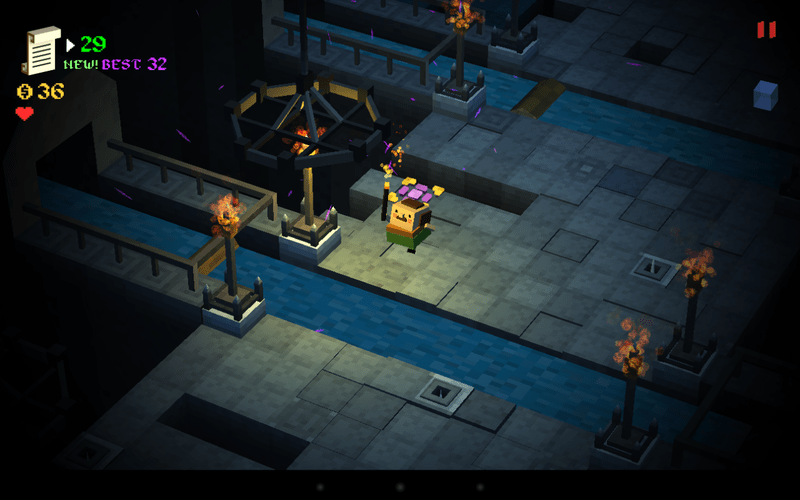 The game is ad-supported and you can remove the ads for $1.99 via an IAP. I have read users complain the ads are annoying and get in the way of playing, but surprisingly I haven’t experienced this myself. It could be that the developer changed something in an update, and I started playing after the update, or anything else.

You can also watch a video ad in exchange for some 50 coins you might be missing to purchase a magic wand or a pair of shoes. All the in-game power-ups and boosts can also be purchased for real money, if you wish to support an indie developer.

Are the IAPs necessary to beat the game? It depends on how you feel about grinding because you won’t get far in the game without grinding for coins and buying the fancy shoes or outfits that protect you from the traps. Also, since the boosts provide for a great replay value and change the gameplay in fun ways, you will want to get them. The good power-ups cost anything from 1000 to 2500 coins, and provided you only get a handful of coins during your one re-play (i.e. before you, which normally happens fast), you won’t get it in one day, that’s for sure.

That said, grinding is a necessity in the Quest Keeper, but since the environments are procedurally-generated, it is an enjoyable nag. Since all the power-ups can be bought with the in-game coins, you just keep grinding to unlock them, to unlock the quests, to enter the quests, to wear fancy suits.

Overall, I think the freemium model is well-implemented in a fair, moderate way in this game. 500 coins cost $0.99, and the most expensive shoes cost 2500 coins, so you can grind some, watch an ad for something, and buy a chest of coins for $1. It’s a fair deal. 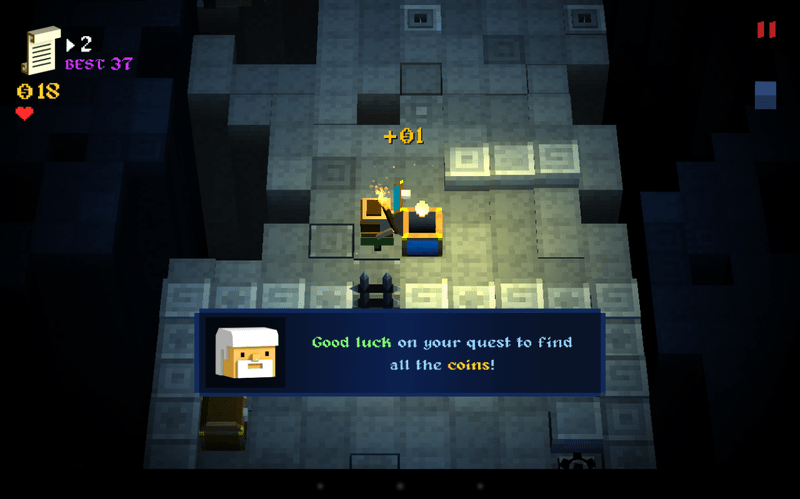 The Quest Keeper is an excellent dungeon crawler with procedurally generated areas, steep learning curve, hard challenges, but ultimately addicting. Its dark design is beautiful while its soundtrack is catchy as hell. The game suggests a lot of unavoidable grinding, but also game-changing power-ups you can unlock by grinding. Provided you like hard twitch games that test your hand-eye coordination, you will enjoy the challenging gameplay as such, so grinding won’t affect your impressions much. At some point, you will be able to unlock the cool shoes and cloaks, and experience the game in its new dimension. Overall, the Quest Keeper is a charming, at times annoyingly hard, but with that the more rewarding game, which looks and plays as a premium one.