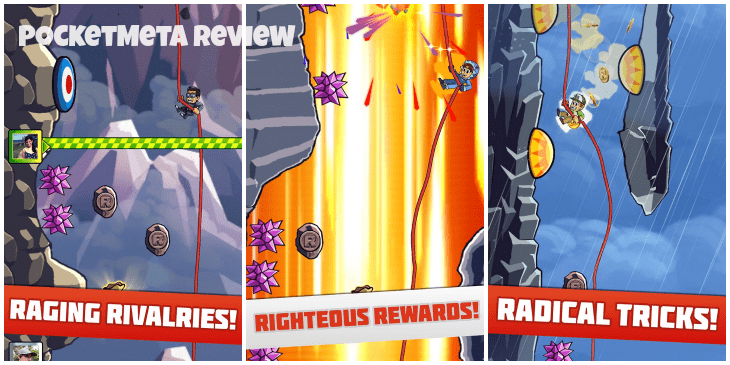 Radical Rappelling is the latest release from Halfbrick Studios, a developer we all know for Jetpack Joyride and Fruit Ninja. The endless type of games are many and the twitch games are an over saturated niche, which means the games come and go faster than you notice. Is Radical Rappelling a game to remember, or is it yet another among the million others? Let us see.

Radical Rappelling offers two customizable characters – one male, one female. Sorry everyone else. I suggest you skip the exploration of the game’s UI and settings and jump right into the action. As you tap the screen, your character goes on a radical rappelling down a steep mountain. Tap and hold, and your character will keep bounce and slide down faster and faster. Take your finger off the screen, and your hero will keep bouncing on the same level. It is only an option for a very short while because there is a fire lava chasing your hero from the top – did they throw a can of Pepsi, or TNT, into a volcano, or something? Otherwise, I see no explanation is to why the lava would be chasing a climber downwards.

The main challenge is the steep mountain is treacherously stuffed with spikes that are very bad for you – they kill you. Hit a spike – game over.

On the other hand, the route is also generously sprinkled with the golden coins and various power-ups, such as rockets, bouncy mats and a whole slew of other perks that make you invincible for a short while, or boost your speed. I am not so sure, but it feels like the boost acts longer if you keep your finger pressed.

That is pretty much it.

Radical Rappelling offers a shop full of goodies – outfits, wigs, boots, ropes and other special gear. They come pretty expensive when you consider how much coins you earn for each ascend. Also, I suspect my coins got mysteriously evaporated while I was away, not playing. Every subsequent purchase is more expensive than the previous one, and the game keeps nagging you with special packs and time-limited offers. Overall, however, those of you who enjoy customizing their characters might find something to dig here. I am not that into all the fashion, especially if you consider all the perks and outfits are purely cosmetic and don’t seem to affect the gameplay.

Once you reach the 4th level, you will be able to upgrade your character and spin the wheel of fortune for some randoms goodies. That is why it’s called the randomizer. Sometimes, it would give you pretty useful stuff, but the problem is these goodies can only be used until you die. Frown. 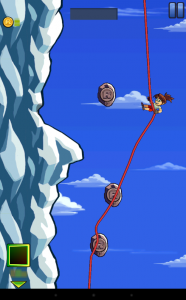 Radical Rappelling is abundant in IAPs, and I am amazed why would anyone buy $130 worth of rubies in this game. There are cheaper packs, of course, so if you care to spend a $1.30 for 10.000 coins or $3.79 for a first time bundle, the game lets you do that pretty much every step of the way. I’d say this persistence is a bit annoying. We can see the Shop icon, alright.

Not my favorite, in either of the departments, and I found that the frequent replays don’t work well with the repetitive exclamations your heroes say when they jump off the cliff. Eventually, I turned down the music and sounds altogether. The design does look polished and neat, I am just not a big fan of this particular style.

With muted sounds and music and smooth performance, Radical Rappelling has an immense replay value, which is perfect for your next favorite twitch game, at least until the novelty wears off. If you are the competitive kind and share your high score via Facebook to see how well your friends score, you might linger quite a good while with the game. The only thing that nags me here is the taps you need to make between your untimely death and the next jump. The Try Again button takes you back to the mains screen, where all the shops, profiles and settings reside instead of throwing you right into the action. Oh well, maybe I am too demanding.

Unfortunately, I have an issue with the game’s performance. First, the initial few seconds after the dude start rappelling, the screen is clogged by three or four menus that are totally out of place when you want to concentrate on action. You may argue those few seconds aren’t crucial and no spikes are positioned this early in the game, but I want my poise as I start the game, and I hate these notifications in my face.

Second, there is a significant lag at some point. It’s fluctuating, and it’s not always there, but every once in a while it would ruin a good ascending. 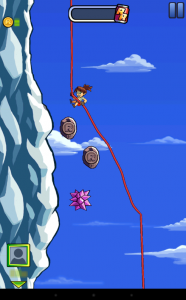 Radical Rappelling is undoubtedly a worthy entry in the twitch niche, although it may not be the best reflex game you’ve played. It’s entertaining and challenging, addicting and original enough to keep your interest alive. It could use a fix to the fluctuating lag issue (frequently reported by users, by the way) and maybe a less intrusive IAP system, but overall it’s a competent time killer.