If you can appreciate the hilarity of a bunch of cartoon-ishly drawn burly men running around in strange outfits with giant weapons, and have at least a minor appreciation of online shooters, you’re probably going to like Respawnables. I’m assuming the title is a play on the movies The Expendables, as well as The Incredibles, because the firepower mayhem reminds me of the first movie, and the cartoony buff guys remind me of the second. Regardless, continue reading to find out if the game is something you’d be interested in, and if it’s even worth your time.

While the game doesn’t have hideous graphics, they’re not necessarily something to boast about — but they are solid across the board and that’s really important. The weakest point would be some choppiness and odd movements, and probably some of the interface elements, but these are minor and aren’t really that bad compared to some other games. I applaud Respawnables for having such a wide variety of different animations and models for weapons, armor, and cosmetic purchases. Also, I really like how the levels are laid out and there isn’t one map that is too similar to another. 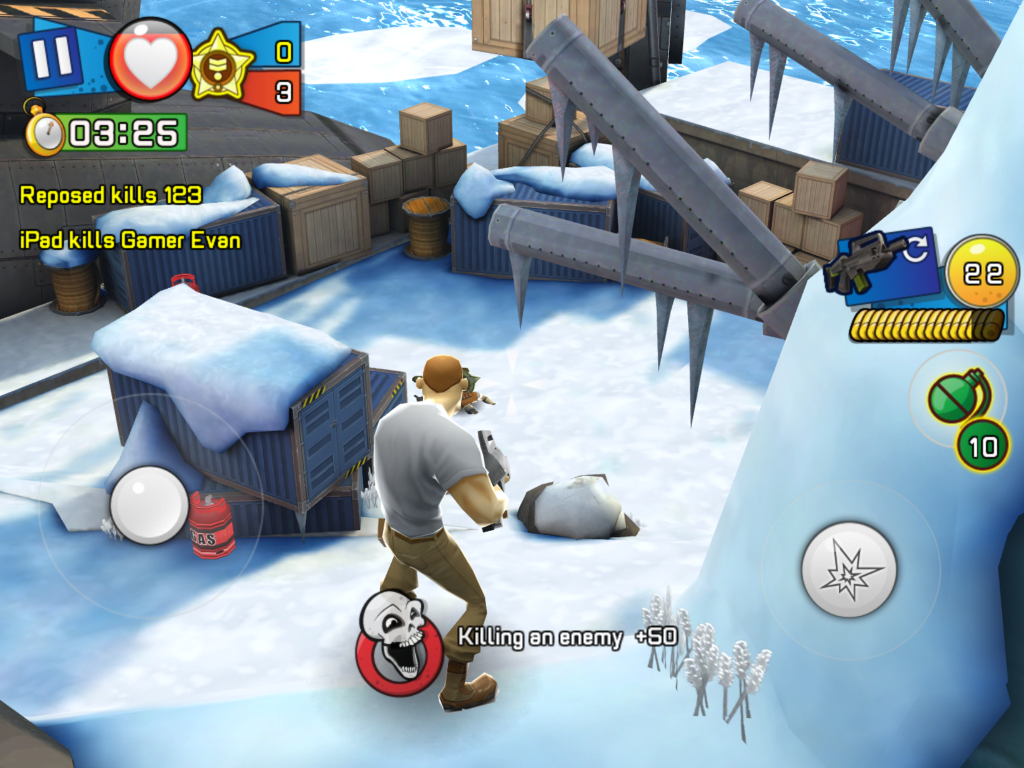 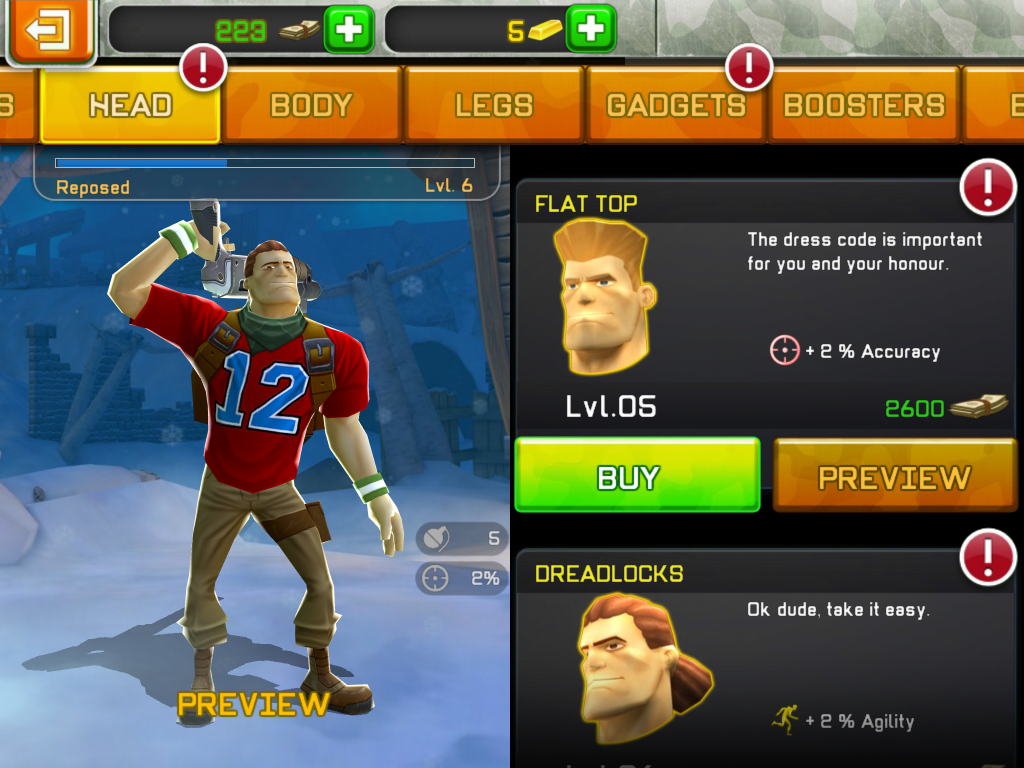 There’s definitely still some room for improvement in certain aspects of the game’s Visuals, but you won’t find too many games of this genre with as solid of a graphical set as a whole. Some titles will have great in-game graphics, but riddled with ugly interfaces or text. Respawnables manages to offer respectable visuals throughout the game, even down to the smallest visual elements.

Respawnables keeps the controls very simple, and the amount of things you need to worry about to a very minimum. Players are given a standard movement circle on the left-hand side of the screen, and then a fire button on the right-hand side, once you unlock and purchase equipment a button will appear for that as well. You can also tap to reload your gun and view the ammunition by a clearly labeled icon above the fire circle.

One thing I didn’t like was that looking around kind of gets restricted to a pretty small area under the firing circle. I’d often end up tapping too far up into the edge of the circle and start firing my weapon. By making the circle only tap-able from the center, but able to move out afterwards, would be a good fix to this in my opinion. There’s no way to crouch, sprint, or quickly turn around 180 degrees, which keeps the game simple but tends to get boring pretty fast. Even aiming is pretty much spray and pray, with some precision involved based on your weapon. 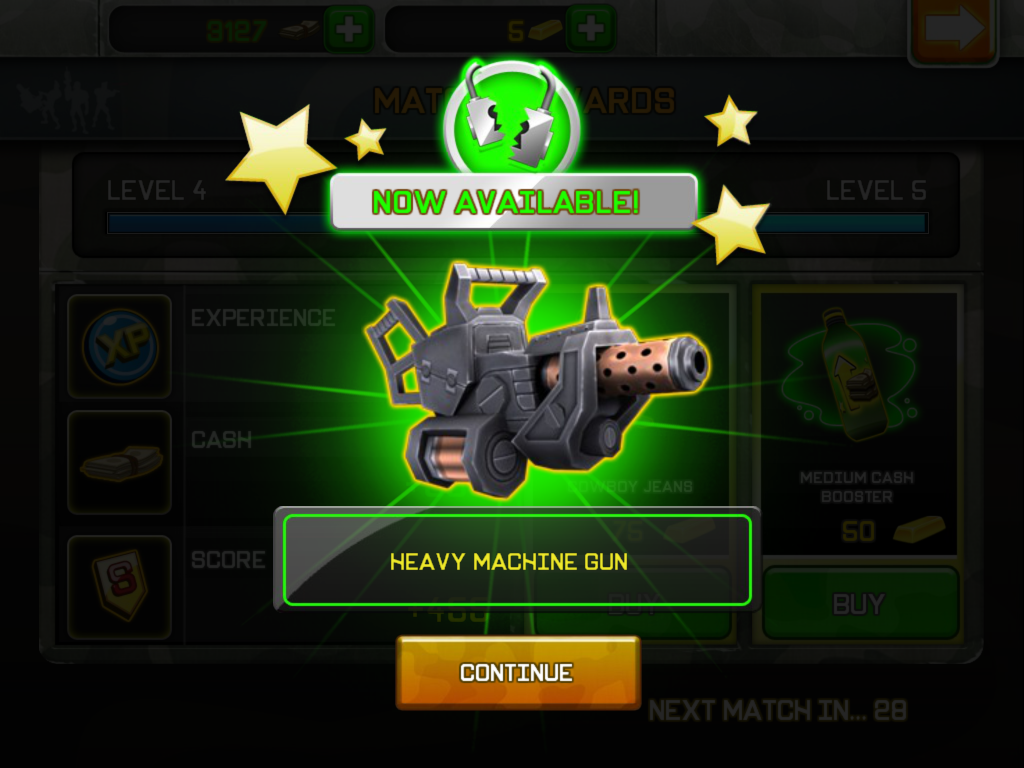 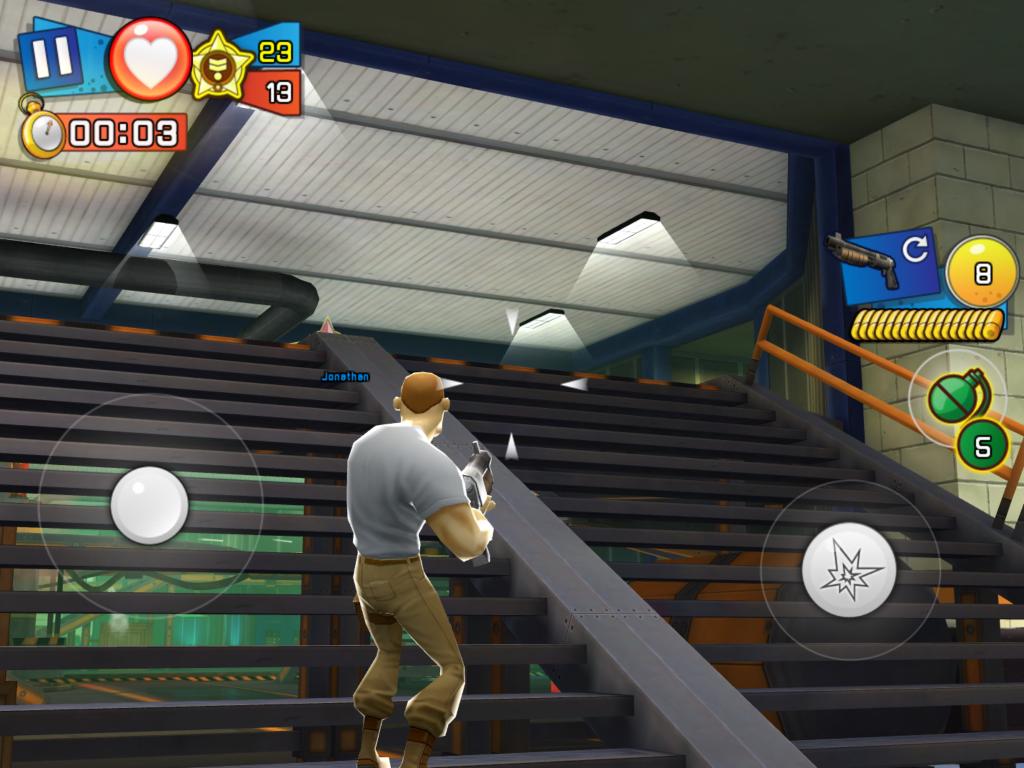 With that being said, the game never feels like it’s broken in any way, and it’s pretty fair for the most part. It can be difficult when high level players have really powerful weapons, and you’re just starting out with the basic rifle — but take note, the Shotgun can be pretty powerful, and always dominates short range against some high level with a rocket launcher. These close combat encounters always feel super intense, and can go on for 10-15 seconds with timely dodging, this is definitely a highlight of the Gameplay in Respawnables.

In it’s current state, Respawnables has a pretty hefty amount of content to unlock, which normally would keep players coming back often. However, the lack of variety in regards to game modes, and difficulty to earn enough money to unlock a few items in the many categories, are both major contributors to why the game gets stale fast. Since there’s so many types of things to buy, including weapons, armor, hair, shirts, pants, gadgets, and even more, you’re constantly unlocking things that you can’t afford because you simply don’t earn that much from matches.

There’s the option to head into Single Player mode and get achievements faster for more rewards, but the Single Player can get painfully boring after just a couple of matches. Unless you’re a higher level, you have limited access to maps, and the AI is easy to dominate, which get’s old quickly. Furthermore, there’s only two game modes for Multi-player, Free-for-All and Team Deathmatch. A game like this needs to have at least two other game modes, such as King of the Hill or VIP. 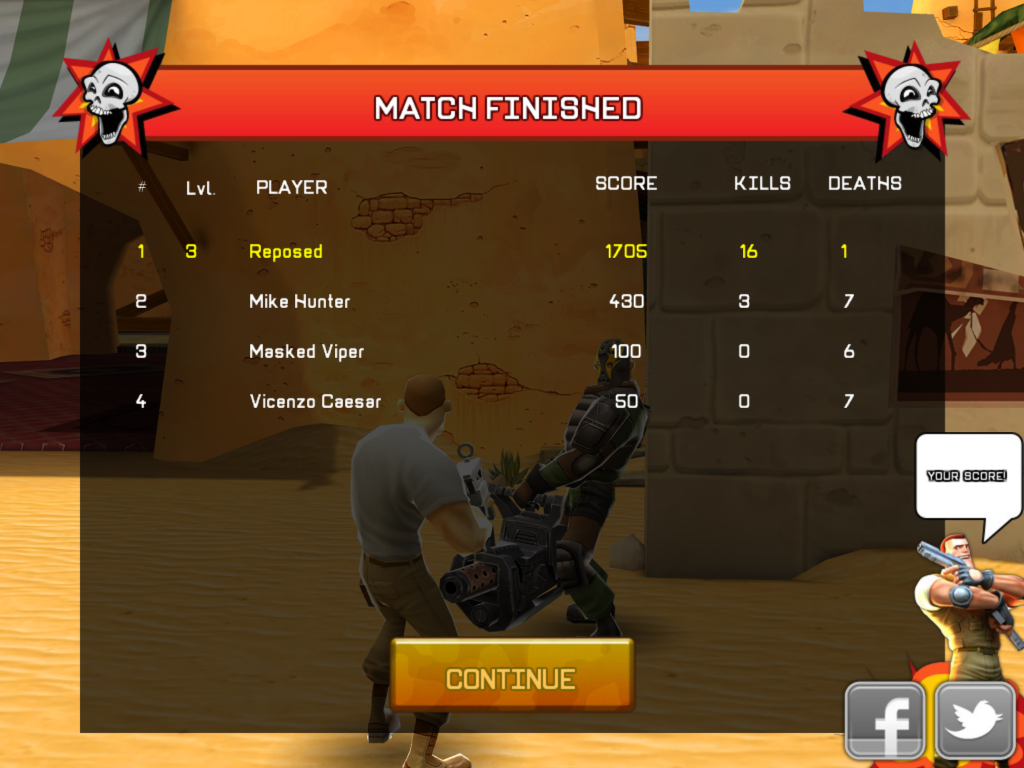 I do see a lot of high level players, so I know people do stick around to unlock some cool stuff, but I can’t say the majority would go either way. This is a game that you’re going to have to love if you want to progress very far in it. A little leniency (doesn’t have to be major) on the cost for items, and additional game modes are two things that could quickly improve the Replay Value of this game.

I’ve already listed the improvements I’d like to see in each category, and that’s refreshing to know that it isn’t hopeless for Respawnables to become a classic for mobile gaming. They’ve already got the big upgrade shop with a huge variety, now they just need to fine tune the Gameplay and give players more options other than just Deathmatch branded game types. I feel like the developers have gone backwards on this, as most of the time there are innovative games with little to actually work towards.

Unfortunately, the game has already been out for over a year, and these changes should have already happened by now. If anything, I think the most we can look forward to is a Respawnables 2, or a similar game from the developers with a new concept.

Like so many other games, Respawnables falls into that middle ground of being a game that could really succeed, but stills is short of glory. On the other hand, that doesn’t instantly make it a bad game, in-fact Respawnables is a really solid game that is a good addition to any game library. I can’t guarantee you’ll be enthralled with the game, and I can’t promise it will be your go to choice whenever you want to have some fun, but it’s good to pick up every now and then.

Click here to check out Respawnables on the Google Play Store (Android).

Click here to check out Respawnables on the Apple App Store.

Have you played Respawnables yet? What did you think of the review? Post your comments below!