How much can you do with a bolt, a dozen dots and a rectangle? I can draw a stickman with a bucket of blueberries, or pills. I’m a simple guy. However, at the back of my mind I know there are people out there who can probably take the same ingredients, build a small engine and fly it to Mars with Matt Damon aboard. A one-man indie game developer Jonathan Schenker is the kind of mastermind who’s probably crafting some wicked AI world-dominatrix in his garage, but until we hear about that, let’s play his mobile game.

Rivet Revolution showed up briefly on the list of the best new paid games on Google Play a few weeks ago, and that’s when we spotted it. A clever, minimalist puzzle game, Rivet Revolution offers hours of mind-bending gameplay and even more fun with the in-built level editor.

You have a grid, and the colorful dots and rectangles placed on it in a seemingly random order. On the one end of the tricky pattern there is a rotating rivet, a bolt. You tap the nearest dots to activate them. Once the rivet touches an activated dot, it will cling to it and abandon its previous place. Tap once and the dot lights up in blue – this means the rivet will continue rotating in the same direction it is currently rotating. Tap the dot twice and it lights up with green – this means the rivet will get attached to the dot and start rotating in the opposite direction. 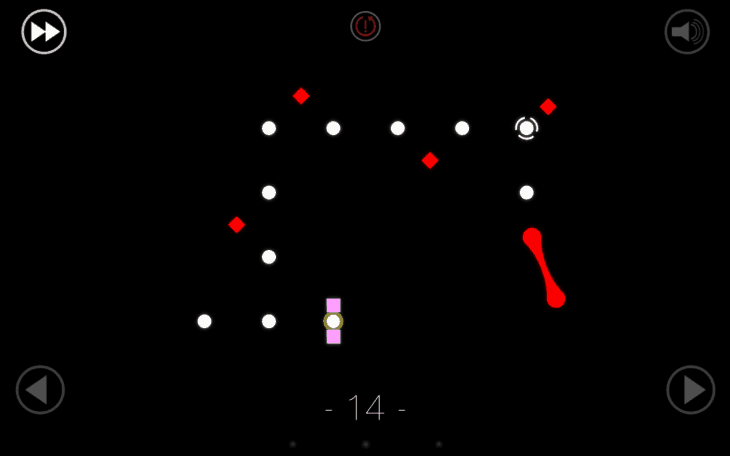 So far so good, the game introduces its mechanics gently and you can get misled by the simplicity of its introductory levels. Soon, it adds the rectangles. The purple ones and the red ones. As the color-coding suggests, touching the red ones will send your rivet into the vortex of the digital nothingness. Touching the purple one, on the other hand, will simply make it bounce off of the rectangle and start rotating the other way around. A few levels in, Rivet Revolution adds the fragmented red circles around some of the dots. They are fragmented because they do not cover the entire dot – this would make it useless to us. Instead, they cover it from one (two, three?) angle only, so you will have to think how to approach it and use it. At some point, more complex mechanics takes part, and you will have to activate the color-coded dots, or deactivate them to get past the red stuff and into the purple exit to the next level. There is a fast-forward button, which need to be long-pressed to work. This way, you can tip-tap the solution and fast-forward the walkthrough. There is also a red panic button you can tap and kill the rivet if you see you have made a bad start and want to restart a level.

You can have unlimited re-tries of each level, which is very fortunate because pretty soon, I’d say by level 14, this games becomes increasingly aggravating. Tap this once, this twice, don’t let it make the full spin here, let it hit the purple there – the gray cells in my head are beginning to overheat. The most aggravating part was when I realized how short my short-term memory actually was. I just played this level, and I know I only made one mistake at the end, so all I have to do is repeat the same sequence again and fix my mistake at the end. And then I mess things up in another spot, and my youngest nephew does it for me. That’s it, this game must be for the young Einsteins, not us, the simple old men playing Bad Piggies. 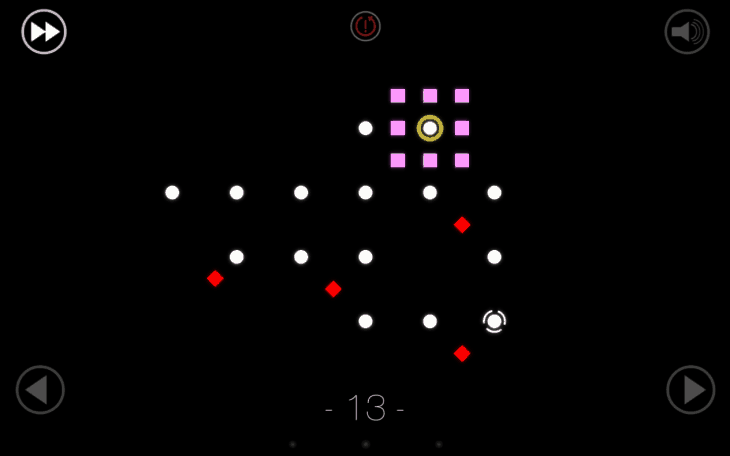 I guess by now I made it pretty clear the puzzles get pretty challenging by level 15, and I honestly just don’t know what to do if I hit a difficulty ceiling. There are no tips, no hints, no playthroughs online. You can’t skip a chapter if you get stuck because the subsequent get unlocked as you beat the previous ones. There are 40 levels overall, and I see it as a drawback that you can’t skip a level you can’t beat. However, the game seems to work its magic with the purest of brains – my nephews are having a blast with it, but they won’t let me steal their solutions, saying I need to detox from Need for Speed No Limits and wrap my head around the challenge on my own. Doh.

It’s immense because the difficulty is escalating, and there are 40 levels and a map editor. The good part is that you don’t have to deserve to play with the editor and it’s available right from the start. On the one hand, you need to understand how all the mechanics work to try your hand at crafting the levels. On the other hand, if you are stuck and toasted in a level, you can check out the community.

The editor has one more perk that goes with it – community-generated wealth of levels. That is, in theory, if someone made it that far and added their levels to the pool. I haven’t, and probably never will. I need someone nice to post a walk-through for my lazy NFS-fumigated brain. 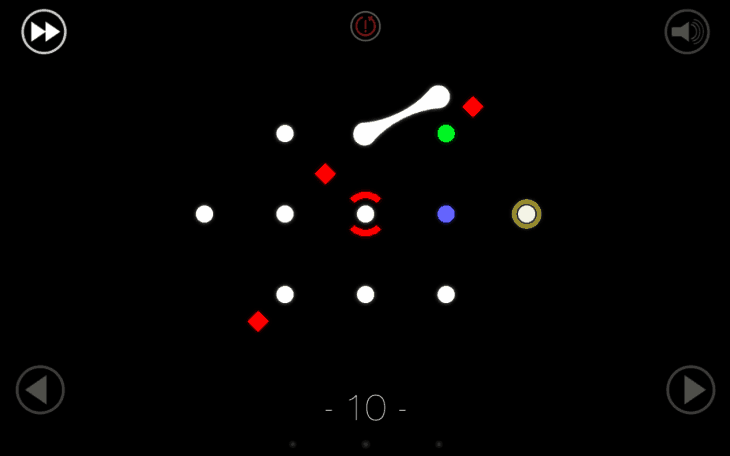 For the persistent player, however, this game is a perfect getaway. The additional perk is that you can play it on the go, it’s not connection dependent. One more good point is the levels are snackable, short and replayable, so Rivet Revolution is a great Zen hypnotherapy for the stressed out folks who seek peace in the world of the patterns and rotating rivets.

Oh, and the game center achievements for the competitive folks seeking out rewards are a nice incentive. Finally, this is the indie game done right, so you won’t see any ads or IAPs here. 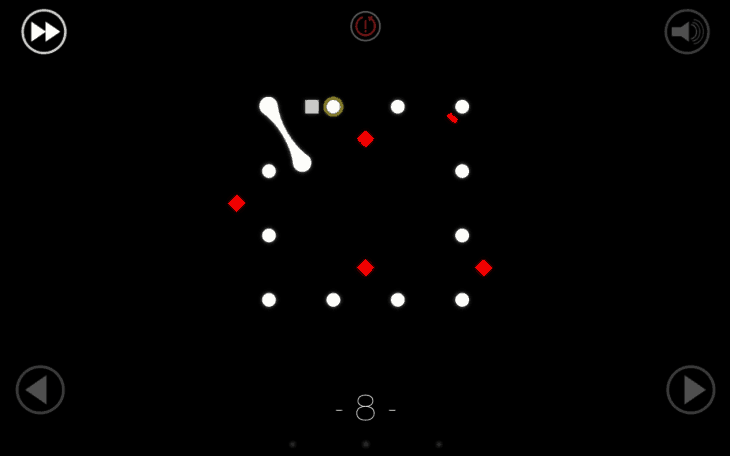 The pure, crisp, minimalist design of Rivet Revolution is a visual delight. It’s not distracting you from the task at hand. Nor does it get boring when the novelty wears off. The dark background and the small neon shapes are eye-pleasing and stylish. Every single part in this game seems polished to its perfection. The music is catchy. I’d even say too catchy, so when I caught myself mumbling the tune to myself hours after I played it, the next time I got back to it I muted the sounds. However, its artwork is not the game’s main virtue. The brain challenge is. This game is one of the best examples of a wonderfully handcrafted product, so all indie lovers – get it. 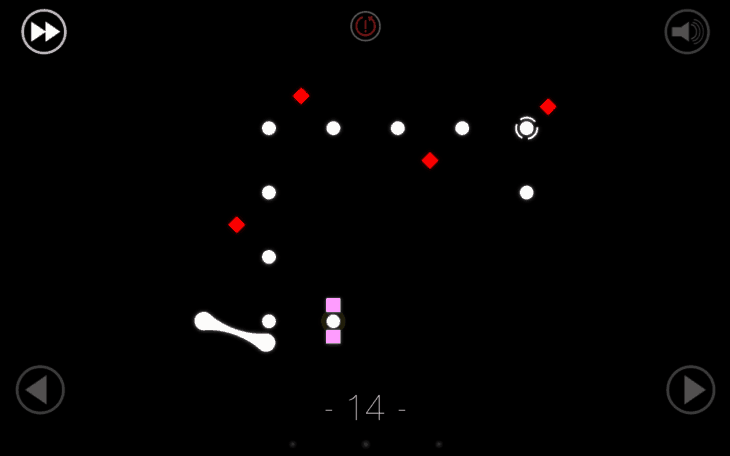 Rivet Revolution is a great puzzle for the persistent player. It’s pure logic delight, with crisp design, brilliant challenges and hours of gameplay. It’s on the difficult end of the spectrum, but I still recommend it to the young and old, the office workers and the commuters, the stressed and the lonely, provided you like what you see. And here is the bonus – there is an online demo you can play in any browser. It might not let you play the trickiest levels, but it lets you get the feel of it, and decide if there is food for thought for you there.

Finally, there seems to be a significant discrepancy in the prices for Android ($1.99, no IAPs) and iOS (free) versions. No idea why. If you liked the Sequence we reviewed recently, you will enjoy Rivet Revolution, too.