The Rock Clock™, ladies and gentlemen, is a brand new alarm clock from Dwayne The Rock Johnson, the Scorpio King, the WWE Champion, the one who tried to arrest Vin Diesel in Fast and Furious 5, but ended up becoming his buddy.

In fact, it’s both an alarm clock and a motivator. First of all, The Rock has style, you have to give him the credit. Of course, Dwayne Johnson did not design or code The Rock Clock™, but it certainly looks chic. No pinky or vanilla colors, or fancy fonts that might have been off-putting to some in other motivational apps like Fabulous. Dark and bold, The Rock Clock™ looks good at night. It does not blind you with a bright color, but the yellow on the dark background looks intriguing.

As for the feature set, do not expect too much, though. The lack of advanced alarm clock or motivational features is easily made up by the amount of The Rock content. And it’s just good fun.

There are The Rock ringtones – 25 tunes, which is my favorite part. If waking up to the bird chirping is not really helping, Dwayne has you covered. He will ring ring, beep beep, yell at and even sing to you. Anything to get your lazy ass off the bed. Well, if you’ve been following The Rock on social networks, you should know he’s a straightforward guy, so a word or two might add more spice to the beeping and singing. I love the cat ringtone. It’s just so annoying when you try your best to stay asleep. So, if you put your phone far enough to have to get off the bed to get to it, chances are the kitties will do the job.

There is no option to set the recurring alarms, or create presets. You will have to remember to enable them the night before.

The motivational part of The Rock Clock™ is quite minimalist, too. You get to create a project/goal and complete a project. Easy as that. If you have trouble thinking of a project to create, Dwayne has you covered, too! There are suggested goals. Like, Come Up With The Best Goal. Ever. Of All Time. Or, eat healthy food, like veggies, and other green stuff. Or lose weight, or gain muscle weight. Or finally clean the garage. You know, the real stuff people postpone until forever. And ever.

You can, of course, make your own goal and be your own man, or woman, or N/A, whatever. The missing features do sometimes feel nagging-ly absent. You can’t add any notes to the goals, fragment them into steps, or add appointments, or workout sessions. However, there is a bright side to the The Rock Clock™’s minimalism. It’s just a motivational app for adult people, the grown-ups.

I always felt frustrated how these motivators and life coaches tell you to divide your big goal into smaller steps, and then add the check marks and the smileys to every little step you have made toward the big goal. I always get bored in the first quarter of the box checking and forget the whole motivational thing. Besides, it’s time consuming, and instead of working on getting things done you end up checking boxes in a motivational app. The Rock Clock™ is down to the ground simple. Set the goal and frigging make it happen. Mark it complete. Don’t be a self-indulgent, procrastinating and whiny Jabba!

One more attractive feature, especially for the fans of The Rock, is The Rock Clock™ itself – which is the alarm set to the time when Dwayne Johnson wakes up. Not my favorite, but you should try it. Quite refreshing. 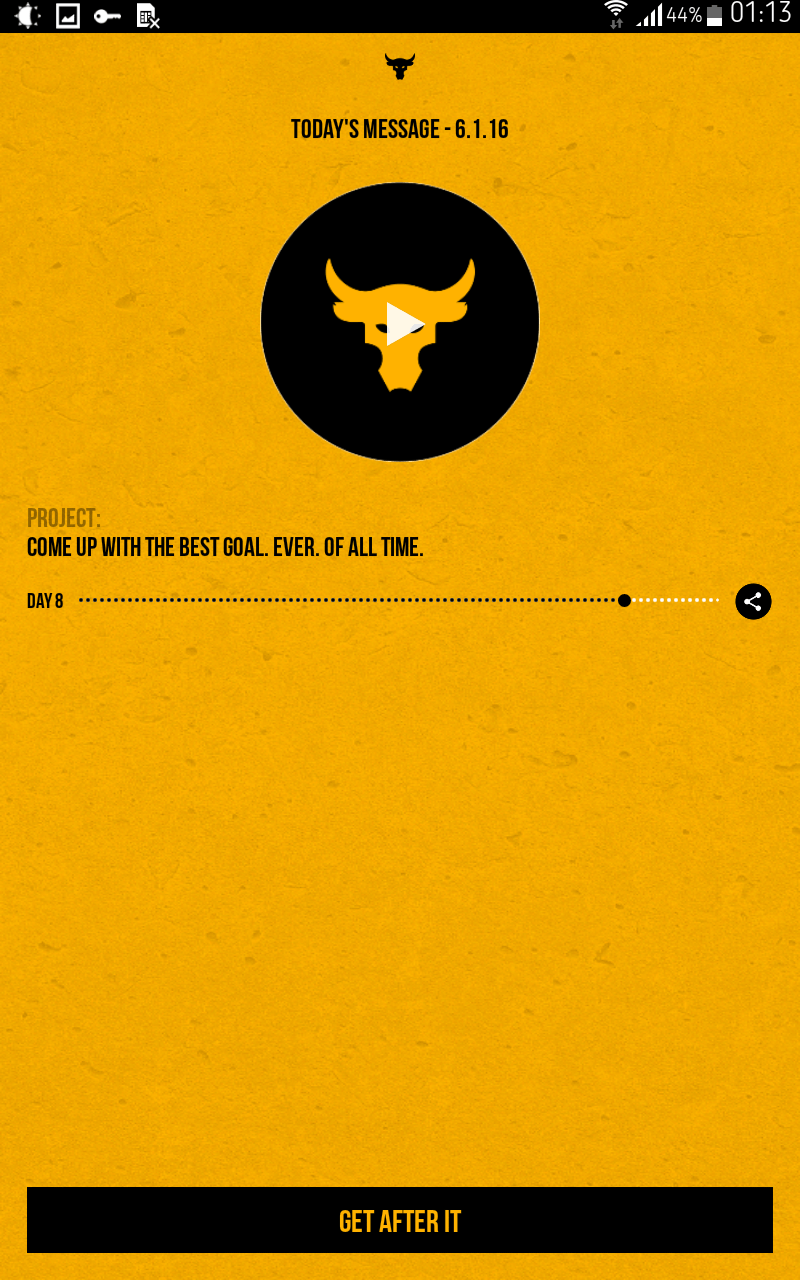 Finally, the app is regularly updated with motivational quotes and videos from The Rock. You know, to keep you focused. These are some pretty good advice. Not sure if The Rock comes up with the words of wisdom himself, or borrows them from some kind of Wise Words or Bill Murray parody Twitter account, some of it is powerful stuff.

The Rock Clock™ might not be your most feature-rich alarm clock and motivator. Its power is in The Rock. If you are a fan of Dwayne Johnson, or simply need a basic alarm clock with unique ringtones and good-looking UI, get the app. It’s fun to use. Likewise, you might just find out this alarm clock is the one you’ve been missing all along. Its no-nonsense approach to telling you to get your sh*t together and get things done is a breath of fresh air among the psycho-babble of other apps.

P. S. Oh, there is no snooze feature, by the way, because “The Rock is not a fan of that button.” What did I tell you?