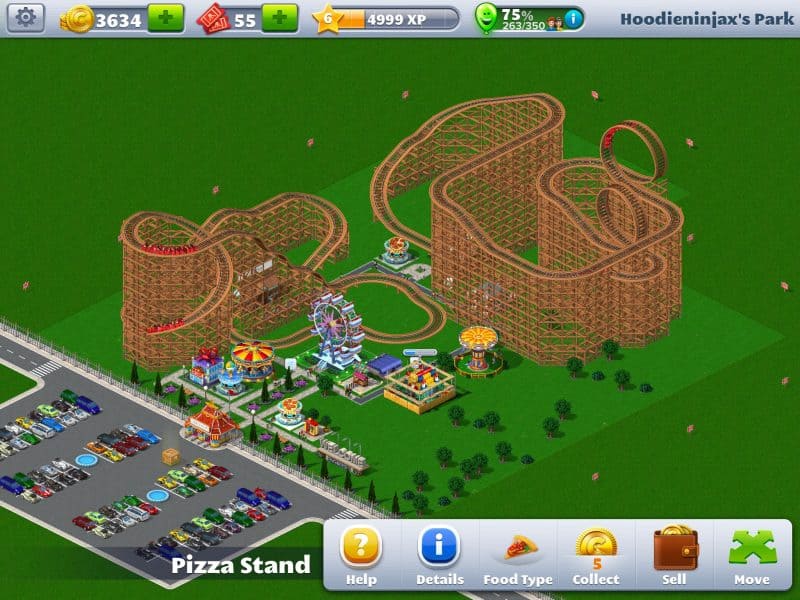 Being a long time fan of the RCT series, I was actually pretty excited when I heard about the new mobile version — although I haven’t really enjoyed an RCT game since the first two, I was curious to see how it would work on a mobile platform. Sadly, I wasn’t too impressed, and by the end of my play-time I just wanted to go play the original Roller Coaster Tycoon on my computer. The worst part about it is how this series has gradually gone downhill after such a fantastic and successful start back in 1999. Read on for the full review…

There are a few aspects of the visuals that I enjoyed, but also quite a few that were just downright ugly. Your first coaster design is wooden, and not that I expect the first design type to look awe-inducing, but these coasters are so unattractive it makes the rest of your park look worse in my opinion. Later on you unlock different designs that don’t look half as bad, but it makes it even worse when early on you don’t have as much room to build your coasters. You can see in the image below, I’ve got two coasters that take up the majority of my park, and I’m still blocking some of my paths and other buildings from line of sight. 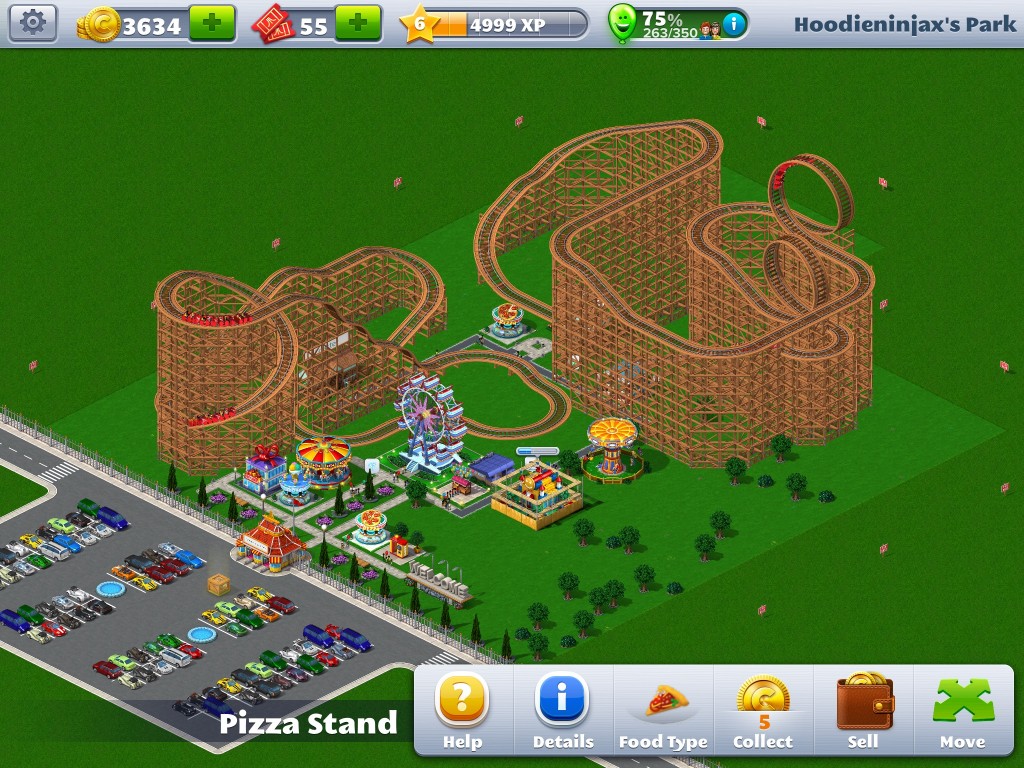 I didn’t experience any noticeable lag or graphical glitches, so that’s a plus, and most of the buildings don’t look too bad. This is by far the strongest category for RCT, but still, it’s not anything groundbreaking. With some more work on the coaster designs, RCT mobile could look pretty good, it just unfortunately did not happen.

For some reason, the developers decided to stray from the original concept of having your park visitors make individual purchases that affect your overall income. Instead, your food shops, rides, etc, generate a set amount of coins over time. Coasters don’t generate any income, and rather just help increase the “buzz” rating of your park. One of my favorite aspects of the original RCT concept was being able to adjust your prices — being able to see what you could get away with charging your guests was a huge part of the game. 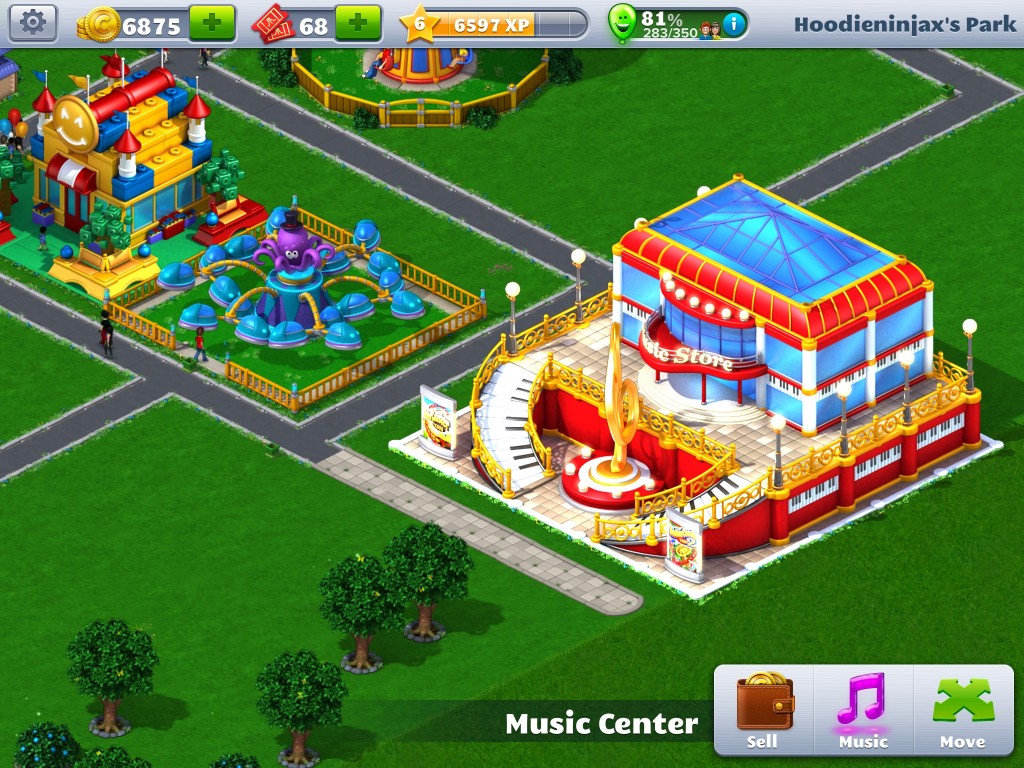 There are a few other parts of the game I just really didn’t like, such as being able to swap out the type of food building with a few taps. There’s not a whole lot of planning or strategy involved with RCT mobile, it’s just a lot of building what your goals tell you to do, and waiting to collect from your rides and buildings.

Building roller coasters and walkways is a major pain due to the game’s difficult to manage interface. Along with other minor issues like not being able to rotate a building fully (you can only have it facing one of two different ways), and not being able to see where your decoration appears when you try to place it so you end up searching for it — because you can’t just tap the area on the screen where you want it to go, you have to drag it. There are a long list of Interface woes that really hinder the poor gameplay even further. 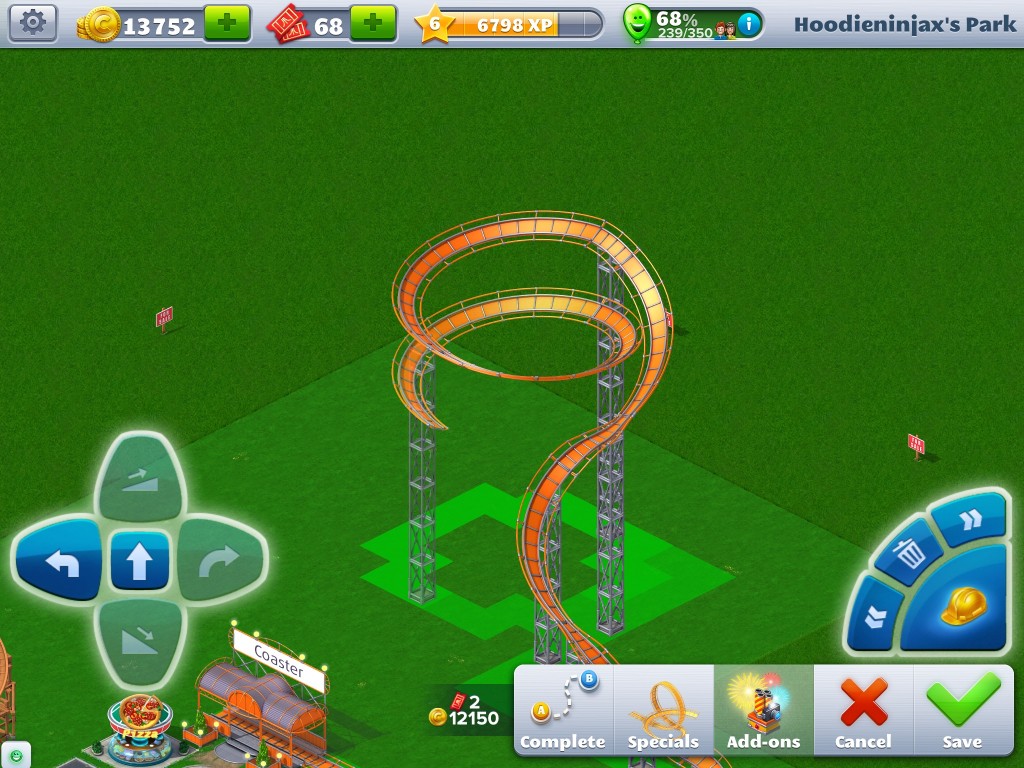 The only real upside is that you start to get a hang of the crappy interface after a while, but that means you have to endure the game for a few hours just so you can play it a little more efficiently. Once you’re able to expand your map a bit more and things aren’t all crammed into a small space, that helps a bit too — but it’s still the same issue of putting up with it for so long that you want to toss your iPad at the wall.

If you’re expecting a comeback in this category, you’ll surely be disappointing. Given all of RCT mobile’s major gameplay and interface flaws, it only makes sense that the game eventually becomes a chore to play. You’ll spend a lot of time either not playing the game, or just sitting there staring at the screen, before you can accomplish a lot of the goals that the game throws at you — this is because coins are pretty scarce. Honestly, the game feels a little bit like the original Farmville, which wasn’t a terrible game, but the model just doesn’t work with Roller Coaster Tycoon. I guess I should be thanking the developers for not requiring me to actually play the game as much, but I’ll pass on that.

The fact that his game costs $0.99 is just the nail in the coffin — granted, even if it was a free game I really wouldn’t recommend it. Honestly the only thing that kept me playing was to see what the new coasters looked like, but at the end of the day there’s just nowhere near enough good content to consider RCT Mobile worthwhile.

Leave us a comment with your thoughts on this game and the review!