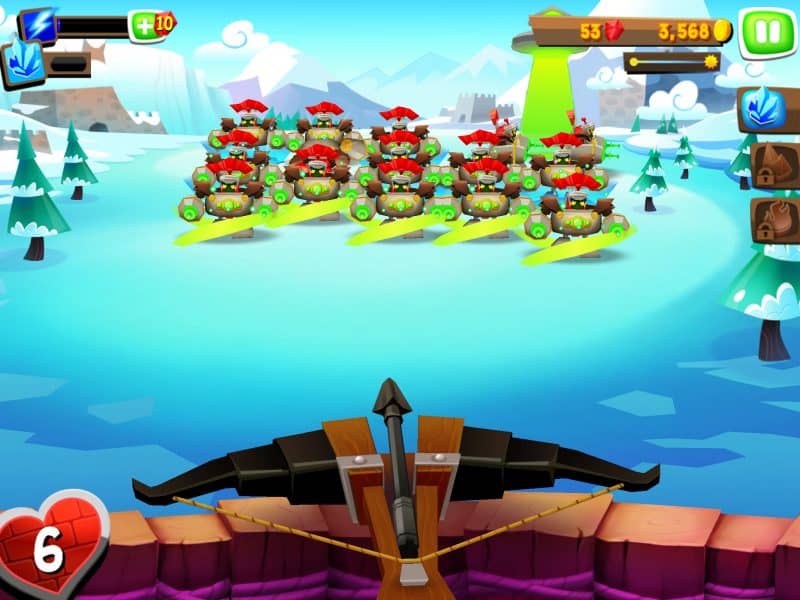 Tower Defense is an interesting game genre, there have been some phenomenal TD games in the era of flash games, but there really hasn’t been anything that has stood out to me on the mobile market. I hadn’t heard anything about Romans from Mars prior to downloading the game, and the game itself isn’t particularly well-known — though it has seen moderate success on the Google Play Store. I was pretty surprised with how much I enjoyed the game though, and I would definitely recommend it to any Tower Defense enthusiast, read on for more!

For a game in the Tower Defense genre, cutting edge graphics aren’t vital to success. Smooth, reliable, and standard cartoon-ish graphics, is pretty much par for the course in this genre. Romans from Mars delivers on all three counts, and the only thing I’d like to see improved graphically is the interface. It’s not bad, but the main menu and the armory don’t look all that great, especially on a tablet, but they do look a little better on handheld devices. 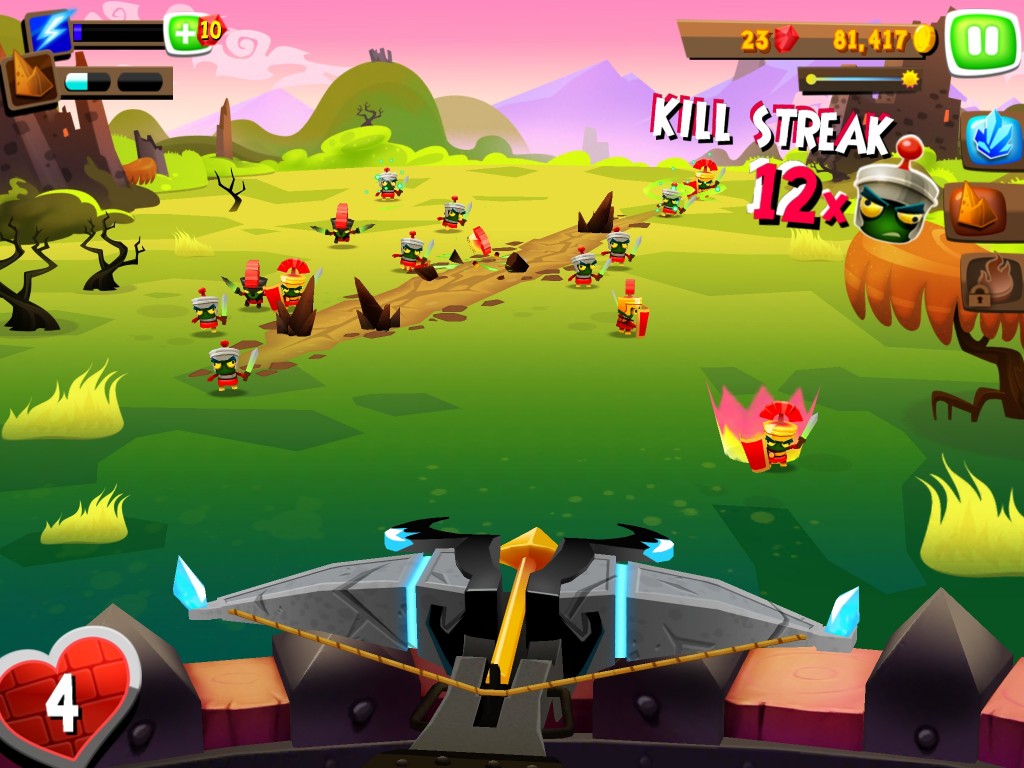 The aliens look pretty cool, and there’s a lot of different models, each one is unique and very distinctive. As your progress through the game, you’ll get a new scenery every 20 levels, it goes from green grass, to snowy mountains, with a couple more stops ahead. With nothing to really complain about, and a variance that continues to grow as you complete each level, I’d say Romans from Mars did a very good job in the visual department.

Personally, I loved playing Romans from Mars, it provided just about everything I like to see in a Tower Defense game. Tons of levels, a wide variety of things to upgrade, intense battles, and I never ran into any glitches or bugs that were a major inconvenience — in-fact, I can’t recall any errors at all, which is fantastic. Really the only negative I found in the Gameplay, was that for the first 10 levels it was so easy that it wasn’t all that much fun, but for these levels I just didn’t use any magic or thunder which made them slightly more challenging.

What I really enjoyed about the game, was how with each level it just became increasingly more chaotic. It wasn’t so much that there was just a mass quantity of enemies headed my way, it was that there was a mass quantity of a variety of different enemies coming at me full speed. Some aliens go slow, some go fast, some dash around the map, some launch projectiles, and some provide shields to other enemies. When you have 4 or 5 different types of enemies coming at your castle, and they’re all moving at different speeds, it takes some skilled reflexes to survive. 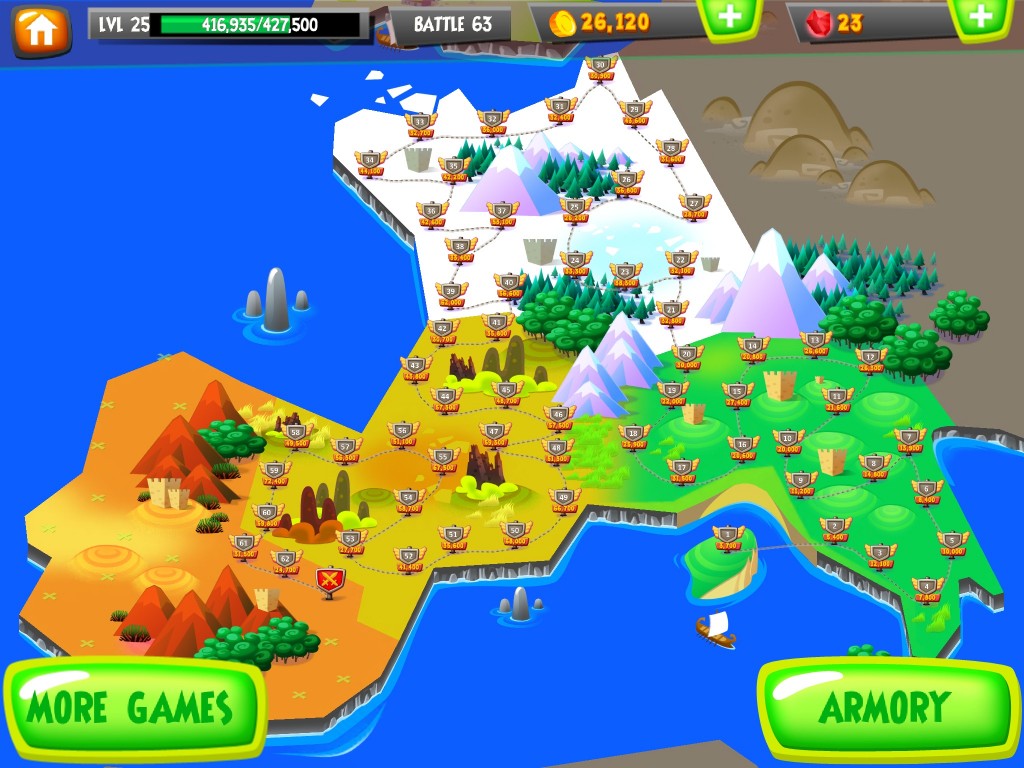 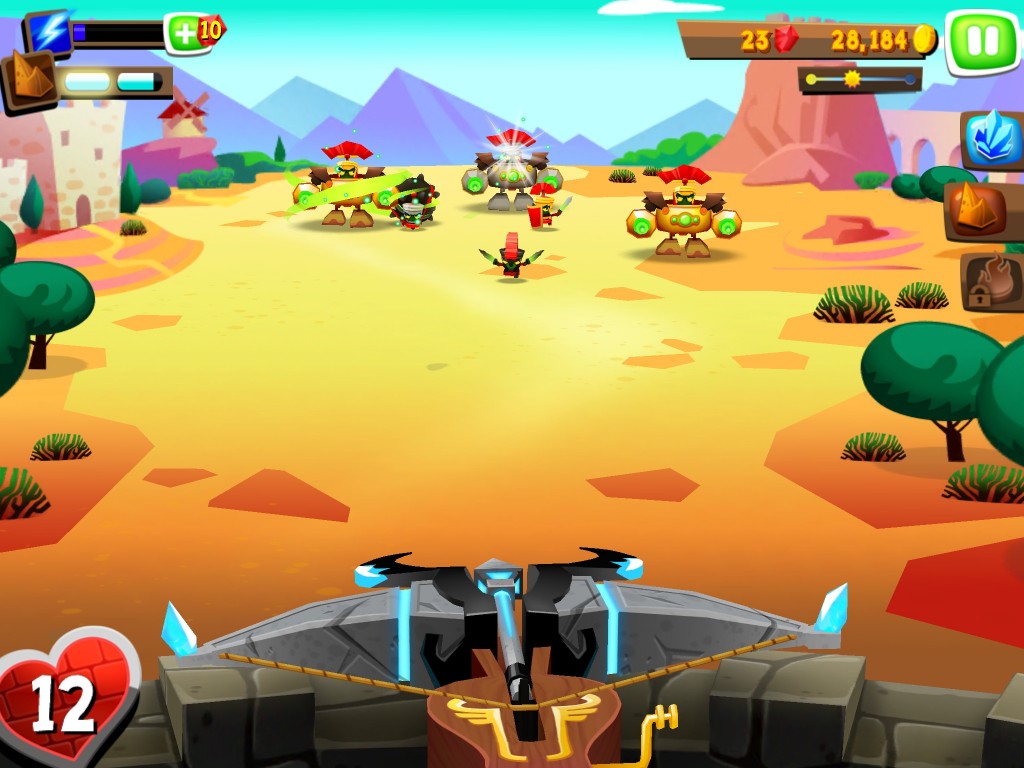 The magic element is really cool, you re-gain mana from killing enemies, and you can use either ice, earth, or fire attacks to help fend of the enemies. Earth and fire are unlocked at levels 15 and 30 respectively, which helps to keep things interesting and give you a reason to level up. Being able to choose your upgrades is really nice, I choose to focus on my rate of fire and blast radius, but others could go for a more powerful wall, better chances for specials, or just an even mix of everything.

Romans from Mars offers a really great upgrade system as I mentioned above, and that is one of the primary reasons why I kept coming back until I beat the game. Since there are so many levels, there’s enough content just in the campaign to keep players interested for quite some time. What I’d really like to see, is some alternate game modes, an Endless Mode is definitely in order here, and would easily boost this game to a 5/5 in Replay Value. Regardless, even if you  beat the game, you can still replay old missions to try and get the new highest score — this isn’t the most fun thing to do, but it’s something.

I wouldn’t worry too much about getting bored with Romans from Mars though, unless you upgrade as efficiently as possible, spend money, or are just ridiculously good at the game, you’ll likely end up re-playing some old missions to earn money for your current mission. This isn’t bad, and keeps the game from being too short — also, the missions don’t always send out the same waves of enemies, with the exception of the final wave always being the same.

Honestly, the sky is the limit for this game, there’s a ton of things they could add for upgrades (multiple arrows, increased tiers for current upgrades, more magic), and some more levels would be accepted with open arms. Before all of that, I’d first like to see an Endless Mode, and maybe even some multi-player functionality along with that. 1V1 Endless Mode to see who can last the longest would be a blast, especially if they threw in some anti-magic that you could use on your opponent — a speed boost line comes to mind, or spawning extra aliens for a short period of time. 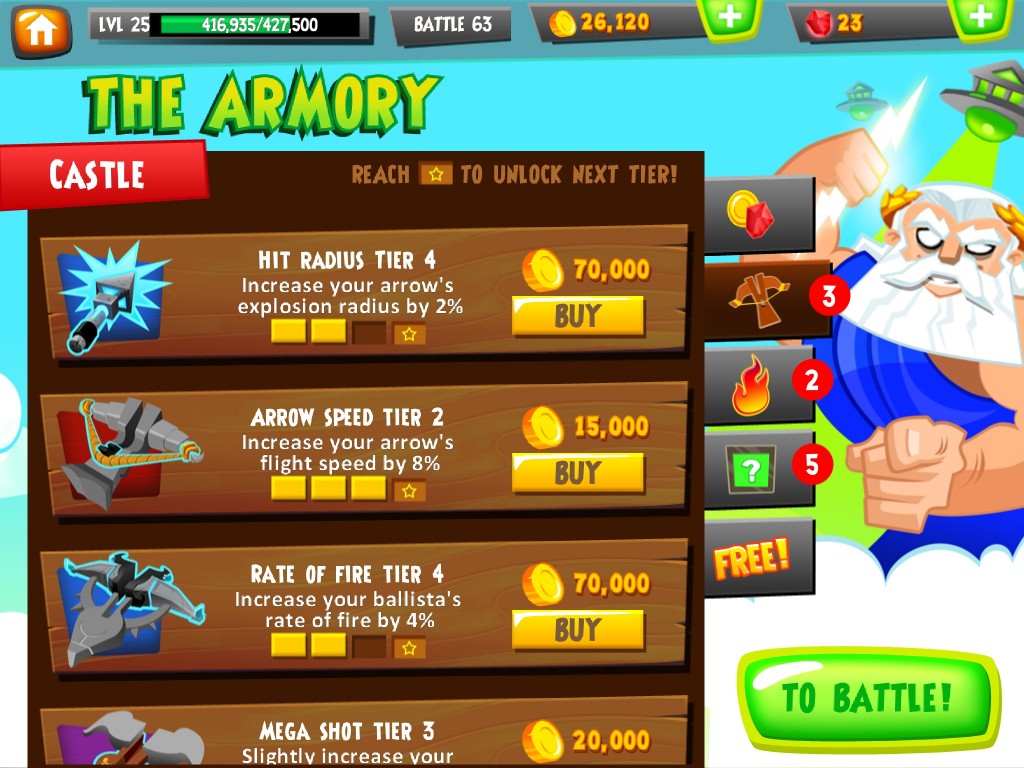 The platform is set for Romans from Mars to be one of the better Tower Defense games on the mobile market, and just in general. I really hope the developers put some more work into adding features to the game, and if they do, I’ll definitely keep coming back for a long time.

Surprisingly addicting, intense battles, and enticing upgrades are all things that accurately describe Romans from Mars. It isn’t extremely unique, but it was so properly executed that it gets by on awesome mechanics alone. With some minor updates, this could be one of the best Tower Defense games on the mobile market.

Click here to check out Romans from Mars on the Apple App Store!

Click here to check out Romans from Mars on the Google Play Store!

What did you think of the review? Have you played Romans from Mars yet? Post your comments below!