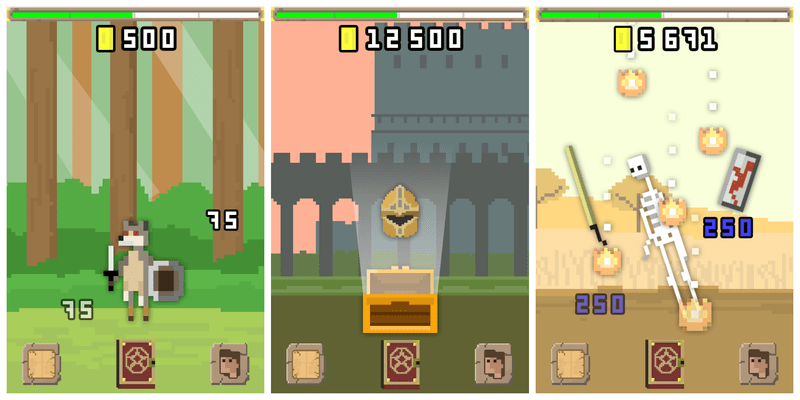 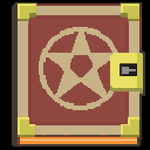 This is the game that makes me want to tweet “I has like 150.000 moneys. Feel the wrath of a rage clicker!” I would not be surprised if someone playing this game already has. Even though I am not fond of the bizarre clicking genre, RPG Clicker offers a lot of collateral fun that accompanies the frantic clicking (isn’t tapping the correct term, here?). I feel kind of guilty indulging myself in a clicker game, but simply can’t help it because the game is sweet, childish fun that makes you feel good about your own gaming abilities. 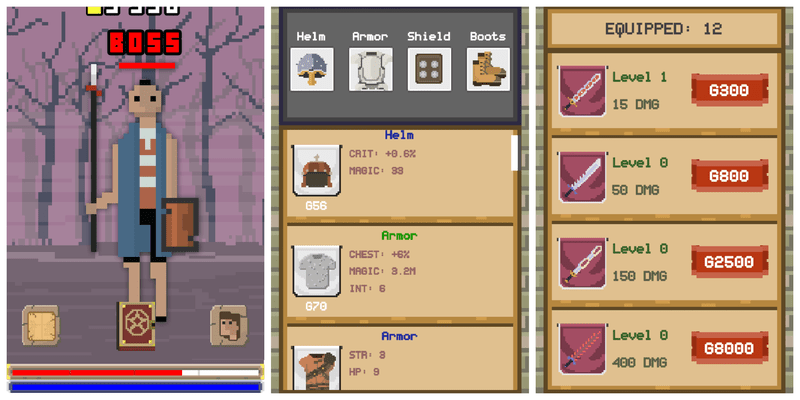 You click, or tap, until your fingers go numb one by one as you switch the active one, or a pair of them. What sets this game apart from the rest of the clicker games is the actual progress you make besides generating “moneys” and the feeling of accomplishment that comes with it. RPG Clicker is a rare game these days in a way that it doesn’t make you feel like you suck at gaming. On the contrary, its gameplay is quite easy, yet requires a bit of a strategic thinking on your part. Notably, it manages to stay fun and appealing despite its being quite easy.

You don’t see yourself. Instead, you only see the approaching foes – knights, wizards, animals. You tap to fight them and eventually they fall apart into a gazillion of red pixels, which is accompanied by a feast of coin fall. Every now and then, perhaps every ten villains you slay or so, you get a chest you also need to destroy and take the loot – coins, spells, magic objects, armor, boots, hats and other attire. 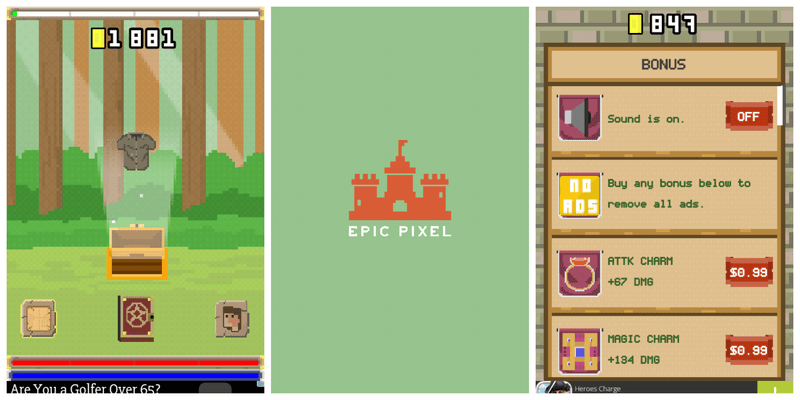 You can equip coins and spells right away when you open the chest while armor and clothes are stored in your Profile. You will get multiple items that seem the same, but have different powers, and the ones you are not using can be sold.

The green bar at the top reflects your progress and once it fills, you can level up by choosing a point to add to one of your skills – intelligence, strike, dexterity.

Once you have enough coins to buy something, a respective button will start blinking.

On the left, there is a map button, which opens up the levels you can travel. To unlock new levels, you need to buy them, and before you know it, you will have enough coins to unlock the next level, but there is a catch. Each levels starts with a boss fight, and if you can’t slay the boss several times in a row, I would suggest you go back to the previous level to level up your character and buy more weapons. 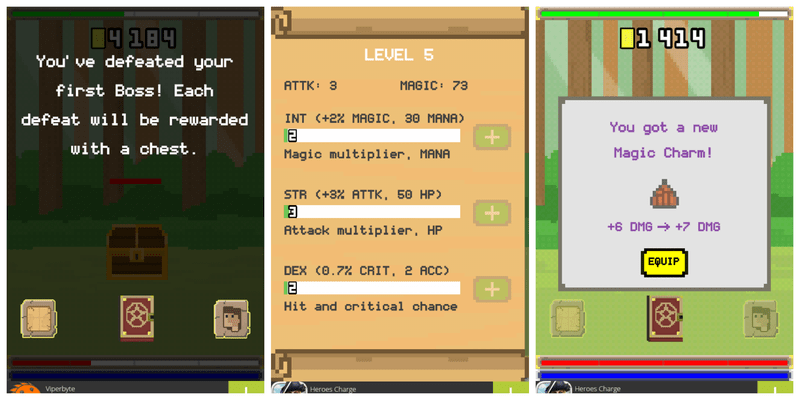 The latter are stored in your profile – the button on the right, which also starts blinking when you have enough money to buy something. At first, I did not get it why I could not buy the more expensive weapons when I had enough money. The point is you have to buy the maximum quantity of low level weapons to unlock the higher level weapons, and so on – the process goes on forever. The same holds true for the magic spells that are also stored in the Profile.

User interface is quite simple to figure out – maps on the left, profile containing weapons, magic spells and ammo on the right. The level up window is also straightforward.

The book button in the middle is for the magic spells – tap it and see the fire balls and thunder destroy your foes in a single tap. 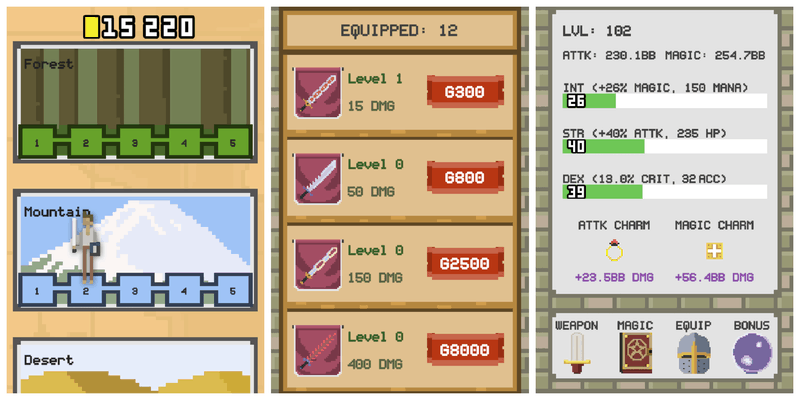 I liked the pixel style of RPG Clicker. It proudly wears its faux retro suit-and-tie colored in pleasant light colors. The bosses are colorful and varied while the foes seem to be of several classes, but they are all the same throughout the levels within the same map. Once you finish off the woods, though, and cross the great divide into the mountains, the foes there are different – bigger, more varied and colorful and a lot more fun to slay.

The environments are merely backgrounds, and in terms of exploration, there is no such thing in RPG Clicker. Although, the urge to get out of the woods and into the desert, or the mountains adds to the motivation to tap quicker.

I also liked the sound score – it is not annoying despite being quite loud, and adds to the overall fun factor when you smash yet another foe. 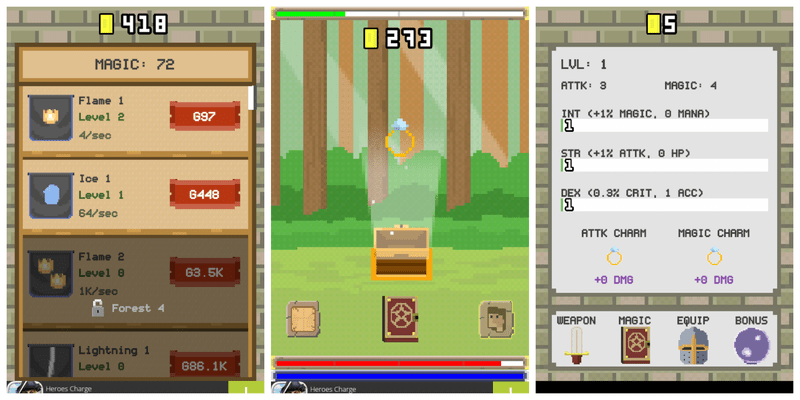 RPG Clicker has something that is called “inflation system,” which means that with every new area, the amount of coins and loot you get by slaying the baddies increments. This makes grinding a surprisingly enjoyable process. Whenever I face a tough boss, I just go back and tap my fingers numb for a few minutes to level up, buy new weapons, maybe get a new hat, and slay that boss in 30 seconds. Sweet.

The great thing about RPG Clicker is it is free. You can remove ads, but they are not intrusive, and most importantly, there are no paywalls and you can achieve fantastic success on your own. That said, if you buy a single bonus, like an attack charm, or a magic spell, it would remove ads and set you off $0.99. There is one IAP worth $1.99, and it comes with a G645.5K in gold. 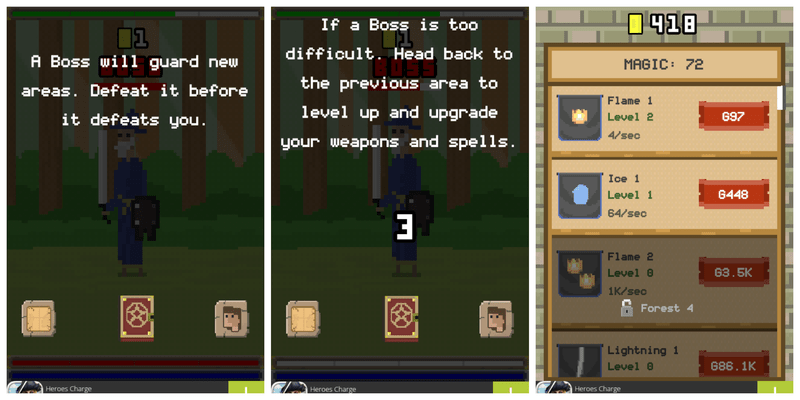 The only nag I encounter is the app seems to be a memory hog. After some ten minute gameplay, I had to restart my device to get the performance back to normal. 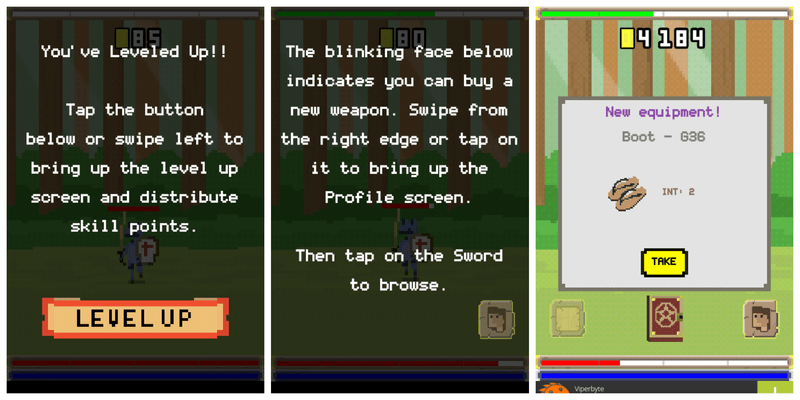 RPG Clicker is a delightfully relaxing and rewarding grind fest with easy, yet challenging gameplay, great pixel art and fun sound score, but most importantly, its clicker core is spiced with a great deal of character leveling up, tons of loot and weapons. Ultimately, you can’t just get through the levels by simply tapping; you also need to consider your character’s appropriate gear and strength to proceed smoothly. Don’t get misled, though, because the main gameplay is pure tapping, but the game makes you feel like you are truly accomplishing something RPG-like with your taps, which sets it apart from “make it rain” kind of games. If you are looking for a fun indie game that works great offline and provides tons of fun for the lazy strategists, get RPG Clicker.