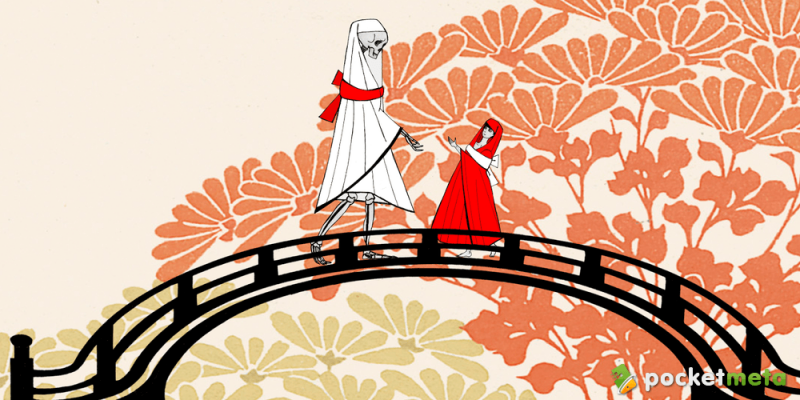 This is official – indies are awesome. They dare to create non-commercial, sometimes politically incorrect, or simply talented works. Yet, they don’t have the marketing budgets to promote their little gems (that sometimes take them years to develop). So, PocketMeta likes to draw your attention to the indie segment of the market every once in a while.

Today we would like to feature Sara and Death, a puzzle game by Rocco Salvetti, with amazing illustrations by Sara Bodini (is that the Sara from the game, I wonder?)

In its essence, Sara and Death is a tricky rendition of 2048, only with cubes and other geometric shapes placed on a grid. You swipe left, right, up and down to match them.

Different colors add more complexity, and at some point irregular shapes appear to make your life harder. In some levels, you need to score a certain number of points. In others, you need to score the points or clear the board in a limited number of moves. Notably, the grids are different in every level, and sometimes present a snake-like labyrinth – you never feel like you’re doing one and the same thing from level to level. The diversity of challenges boosts the replay value, especially since some levels will require you to re-try multiple times.

It is a mind boggling and pleasantly difficult experience, but it would have been bare bone puzzle if it did not come loaded with art, philosophy, plot full of darkness and mysteries.

Sara is a young woman whose time to die has come, so she gets a visit from the lady.

Unwilling to accept her death at such an early age, Sara challenges Death to play a game. As long as Sara plays the game, she is alive. Perhaps, she might find a way out of the demise. For some curious reason, Death accepts the challenge, and so the game begins.

What happens next story-wise is very interesting to follow. There are several chapters in the game, each consisting of a dialogue and multiple levels. These dialogues reveal how Sara evolves, in a way. 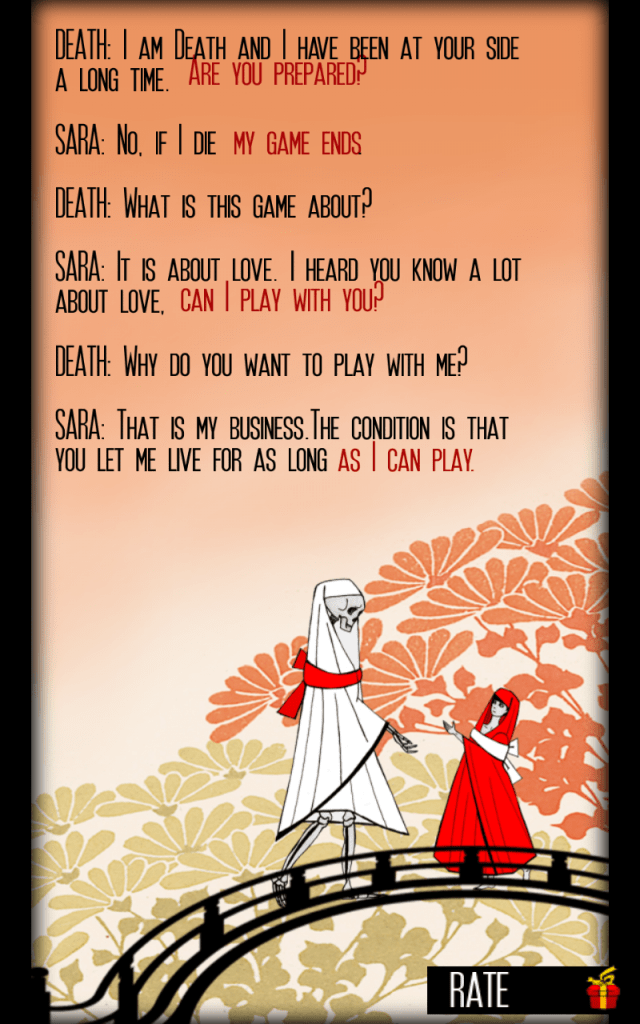 You see, as any young woman, Sara is curious about love. So, that’s what interests her all along. All through the gameplay, Sara is tormented by her musings and suspicions about love. At some point, she begins to feel sarcastic, suggesting it’s nothing more than a game. In the next chapter, she enjoys the physical aspect of it, but nonetheless, her pursuit of true love’s meaning escapes her.

As that plot unfolds, the puzzles become increasingly difficult, with some pieces being stuck inside of others. 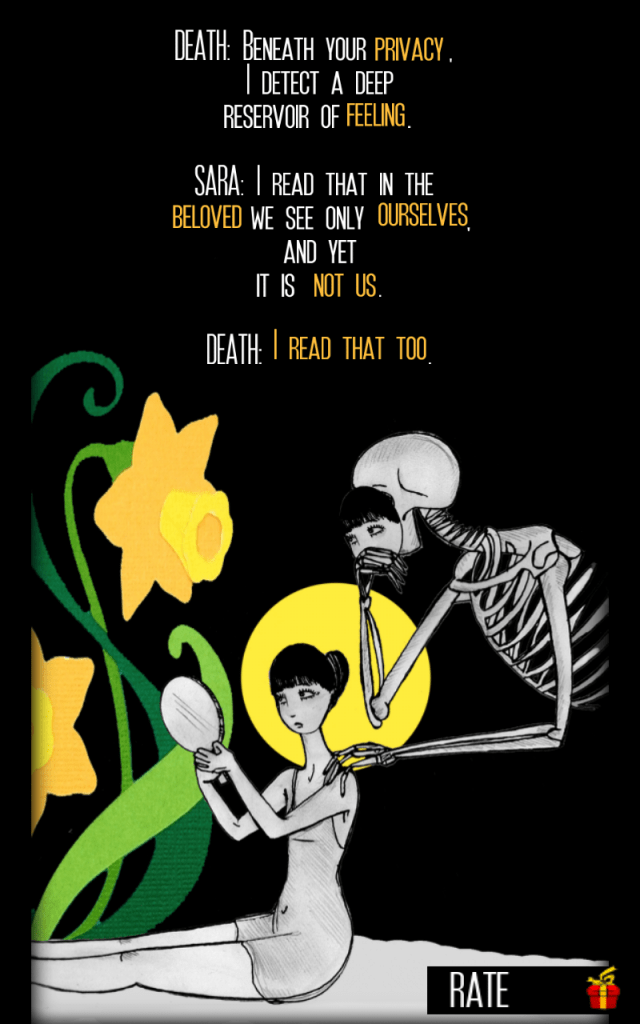 According to the description, the game was inspired by Ingmar Bergman’s Seventh Seal. That’s some deep stuff millennials don’t watch these days. It’s a 1957 drama about a man seeking answers about God as he plays chess against the Grim Reaper during the times of the Black Plague. Sounds familiar, and seeking answers about love is pretty close to Seventh Seal’s plot. If you get to enjoy the game, you might dive into the cinematography classics and watch the movie. There is Max von Sydow starring, and I can’t remember seeing the actor that young. 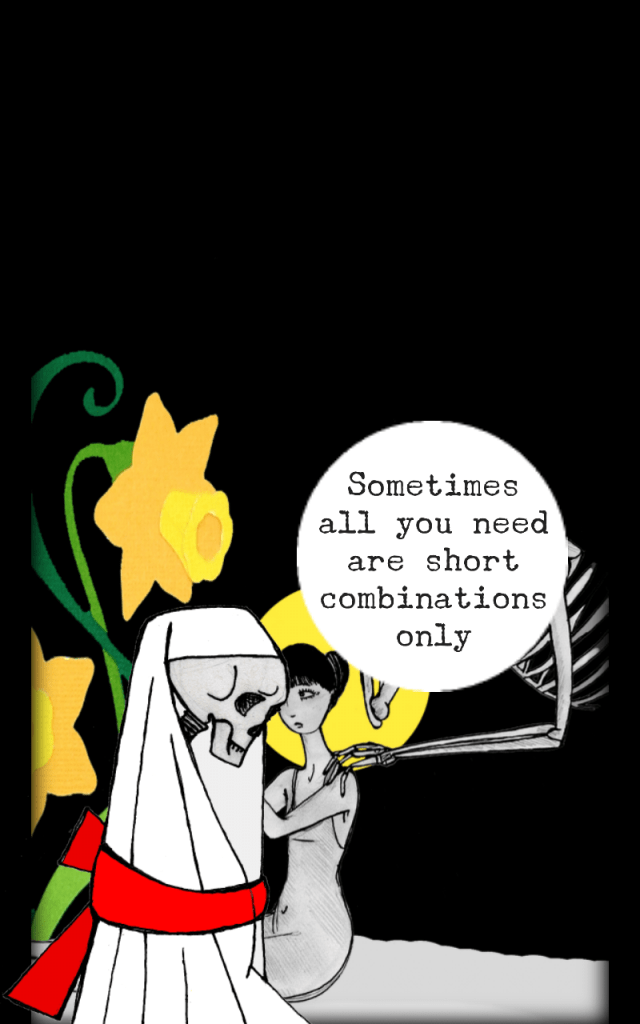 Wrapping up my impressions, Sara and Death is a work of art in design and music. I love the art style, the intense colors and the gloomy atmosphere, deep music vibe and a wee bit of a retro feel to it. 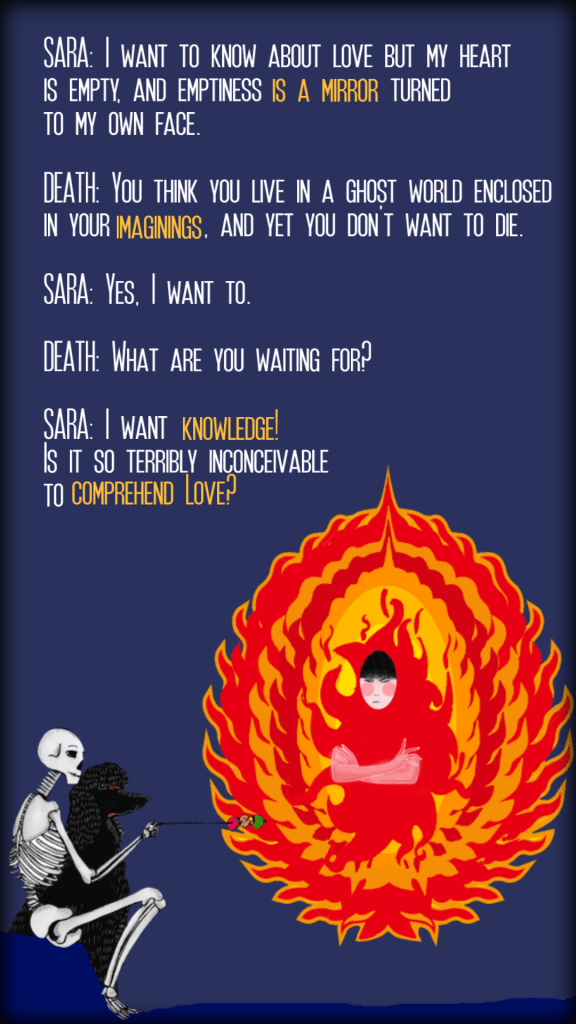 Sara and Death is not your typical time killer. Its unique and provocative artistic value is seriously backed by its gameplay difficulty, replayability, refreshing plot, and some no-nonsense philosophy for folks who appreciate talent.

It is free – no in-app purchases, no ads, minimum permission and cross-platform availability on Android and iOS. An unusual little puzzler, Sara and Death is intelligent, addicting and beautiful. Get it.

If you enjoy Sara and Death, you might also like The End of The World, Gathering Sky, Cloud Chasers, 2048.