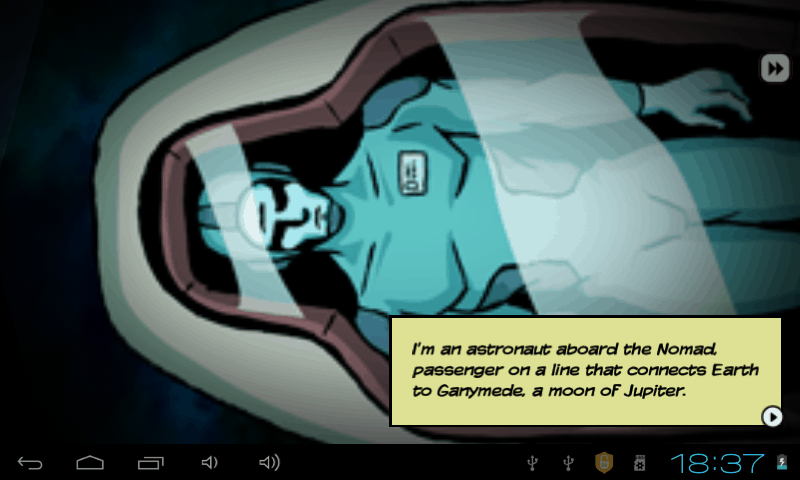 Currently on sale, Out There is an award-winning sci-fi adventure unlike anything else you’ve ever played. I was skeptical about it due to the amount of praise online, so here is the un-biased opinion of a sci-fi aficionado.

Some say it’s roguelike, but to me it’s a pure sci-fi space odyssey. And Odyssey it is – if you think about the epic hero, Odysseus finds himself far away from home, lost and next to dying, in a vast Ocean filled with weird creatures, some friendly, some hostile, some indifferent. He dreams of returning home, but his days are filled with lonely, exhaustive sailing through an endless ocean of despair and hope.

Out There captures that idea and atmosphere and takes it into space. It’s set in not-so-distant future when humankind exhausted the planet’s resources, but hasn’t really mastered the Solar System travel, yet, so no wonder our hero gets lost.

You fly solo on a small spacecraft deep in space. Something has gone terribly wrong while you were in cryo-sleep, so an emergency system wakes you up. You were supposed to be in the Solar System, but you are in the middle of deep space, with scarce fuel and oxygen stock, and not a single alive soul around.

Survival becomes your daily routine, and fuel/oxygen supplies doubled by hull repairs now define your chances of ever making it home, or at least to a supply station.

Out There is not about space shooting, racing posh starctafts and allying with grizzly aliens against your foes. Nope, it’s a different story of a lonely space drifting through endless stargazed Universe. It reminds me of Ray Bradbury’s The Martian Chronicles, Stanislaw Lem’s Solaris or partly Ridley Scott’s the Alien, not for the aliens, but for the unique atmosphere of a lonely human drifting through space with no chance but only hope for survival.

You will die in Out There, so be ready to fail, leaving your astronaut in his cryo-chamber, hanging in limbo for centuries. Unless you dismantle the cryo-chamber to get some silicon when you need to build the alien technology that would let you jump through space. That way, you die faster.

There are multiple endings in the game, and getting to at least one of them is really tough, but this is the fun factor for the right gamer. The real gem in this game is the gameplay itself – the journey, not the destination. However, you do have a destiny in Out There, and if you uncover it, you might as well save the human kind, so each failure keeps you coming back for more and trying again.

The game generates a unique universe each time you start over, so sometimes your previous experience becomes next to useless because the new world offers new challenges. There are 8 spaceships, each with its unique specifications and strengths you will have to master.

The story unfolds in a handwritten book style, with over 300 multiple choice adventures, so your choices shape the outcome. For example, you find an object floating in space – catching it might get you some useful resources, but you may suffer hull damage that would be the end of you. Would you take the risk?

Or, you orbit a planet, and you can choose to drill it for resources, explore and find a life form, or leave it. Are you an explorer, or a survivalist? The odds are you die anyway, so why not explore a bit further this time?

Sometimes, you stumble upon alien technologies or languages you can master and expand your star craft’s abilities, or even engage with an alien life form. Some are indifferent, some curious, some weird.

High replay value paired with gorgeous pulp comics graphics make it an interactive sci-fi novel, engrossing and featuring all the lures of the genre.

Just like a few years back I wondered who the heck was Tiesto after I heard Battleship Grey, I began my acquaintance with the Out There game with Siddhartha Barnhoorn’s Out There soundtrack, and it was the reason I purchased the game, a lame buyer as I am (the discount is still valid, by the way). Some users say they got hooked on ambient music after Out There OST, and chances are if you appreciate a fine sci-fi novel, movie or a game, you will enjoy the game’s dark charm multiplied by the truly ingenious indigo-colored music.

I’d say screenshots do not convey the charm as much as they cannot convey the atmosphere. Its comic book styled 2D hand-drawn art can be fully appreciated only when you dive in the game and the next thing you know the working day is over.

I deliberately exclude the Pros and Cons sections in this review since it’s all Pros to me and I’d be drowning in superlatives and adjectives, with one little catch however – the world is procedurally-generated, so chances of success depend on both luck and strategy. Nonetheless, there are a few tricks that might help you advance a bit further next time – read on.

Out There is a one-time purchase; no in-app purchases – nada, which is a significant relief that allows you to focus on the gameplay. 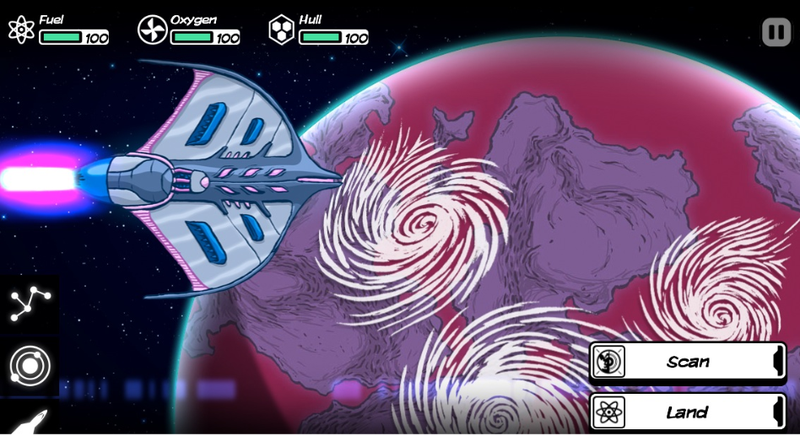 You may want to check out the game’s dedicated forum, leandercorp, or PocketGamer, but in the meantime, here are some tweaks that might help you move on.

By default, it’s 5 km, but you increase your chances of getting valuable resources like He or fuel if you drill 10 km deep. If your hull gets damage, but you encounter Fe, you can repair immediately and replenish your stock.

Refill Oxygen and Fuel Only When It’s Critical

Chances are you might find a free refuel planet or a new level-up ship, and save on fuel. Likewise, a drastic event can cause you 40 fuel loss, so if you only have 20, you actually save.

The game is not just about fuel and oxygen supplies. Alien technology upgrades your ship, and you desperately need that since distances between systems become huge the further you progress.

Rocky planets are more likely to get you alien tech than garden planets, while the latter will get you oxygen. The further you advance, the more difficult it gets to find unoccupied planets with oxygen in the atmosphere, so fill that stock.

Each ship is unique, and the number of element slots is limited, so drill and refill considering each vessel’s capacity and weaknesses. Faster ships have small storage. When you find a new ship and choose to take it, remember to take your stuff from cargo room with you. Dismantling non-vital systems can save the day sometimes, so don’t forget to check your ship’s modules when things get tough. You can go as far as breaking your old ship’s equipment and hull for scrape material before you take the new ship.

Gas giants are rich in fuel elements; rocky planets have iron you need to repair the hull and for some alien tech; garden planet – oxygen. As I said, stock slots are limited, and if you have them filled with essential elements, you might miss a cool tech when you find it. Try to keep a few slots empty.

Don’t rush too much, but try a measured approach to exploring the Universe, taking necessary risks, but minding that fuel/oxygen stock.

Black Hole as well as Super Nova is bad for you.

Out There is difficult and unforgiving, yet it combines the must-have prerequisites of a sci-fi adventure – it’s mysterious, challenging, creative and sinister. An intellectual treat to those who like reading rather than shooting, Out There is as addictive and desperate as space survival itself. You might learn a few things but die, try again to find your experience worthless, get stranded on a lonely planet with a low-level ship and no chance of refueling. Try again, and next time it’s going to be different and you will apply your experience to full advantage, but wait – there is something really big and important ahead. It’s not just about surviving; Out There has a plan for you, your Destiny intertwined with the destiny of the humankind remaining few, so the stakes are high, the pressure is huge. Hurry up, your time is running out.