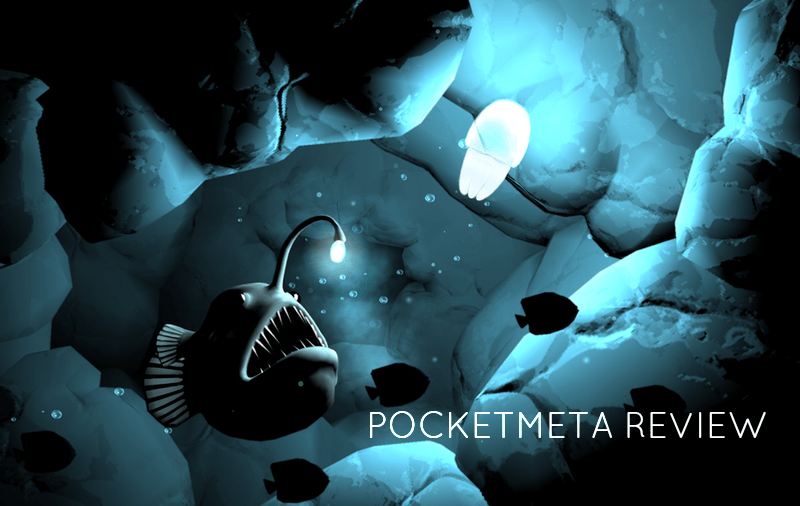 A claustrophobic survival experience, Seashine impresses, terrifies and annoys beyond tolerable. You will either love it, or hate it. Let us see why.

I admit I feel a bit uneasy around confined spaces, like elevators, classrooms, closets, dungeons and basements. Oh, and subway. I like swimming, however. I don’t dive, but feel quite confident without floaters. Jokes aside, Seashine evokes the worst of many people’s nightmares – drowning in the dark, alone. If you get this pressing sensation in your chest when you watch the drowning scenes in the movies like Sanctum (watch trailer) or Chasing Mavericks, you know what I mean. We must have drowned in our past lives.

The first time I saw the game and launched the Tutorial, I was anticipating a laid-back exploration game in the same genre as Sparkle 3 Genesis. After all, the genre is set as “adventure” by the developer. Forget it. Seashine is a highly stressful endless ascension with no light at the end of the tunnel, or cave.

You control a neon shiny jellyfish by swiping in the direction you want it to move. Even though the control scheme is quite intuitive, don’t be misled by the seeming simplicity. The jellyfish moves in its peculiar way. It uses a sort of jet propulsion by squeezing its body (not tentacles), and pushes jets of seawater from the bottom of its body to propel itself forward.

You need to figure out the mechanic of the jellyfish propulsion to make the swipe control scheme work for you, not against you. Otherwise, the gameplay turns into a painful and annoying experience, and you may drop it altogether after some 10 minutes despite all its virtues.

The problem is you are very, but very pressed for time. The neon dude has a life bar at the top of your screen, and it depletes fast. I’d say – too fast to enjoy the experience. Hence, the control scheme collides with the time-based nature of the game, and the outcome is controversial. 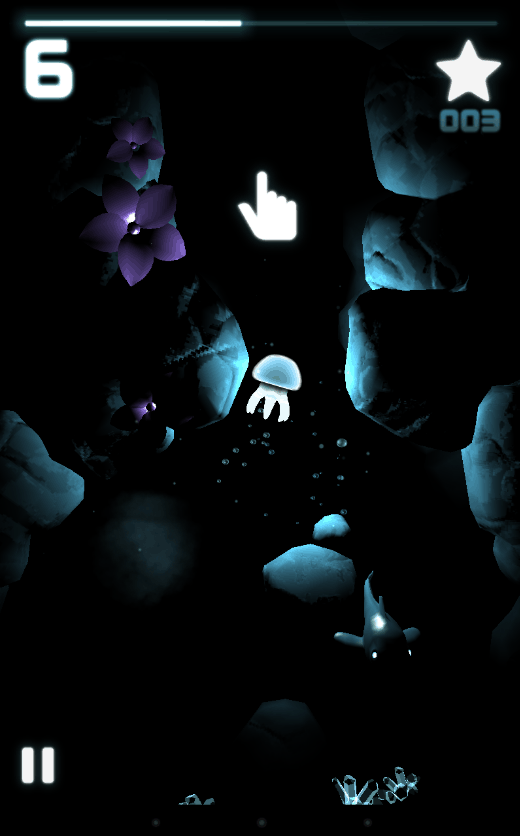 On the one hand, you have a gorgeous game in itself – the visuals, the sound score, the variety, the idea. On the other hand, you need to swipe so fast it turns into a reflex-based arcade, just an endless runner, where you chase after a high score.

And it’s a shame. Seashine is a beautiful experience, inviting to explore and enjoy, but its pace is that of a twitch game. We usually admire cross-genre games, but in this case the different genres collide and conflict instead of singing in tune. I want to float and stare… no, marvel at the visuals, but the depleting health bar makes me act stupid and swipe hysterically, so my jellyfish never really stands a chance to advance far enough to want to boast it off.

The life bar is filled with light, and to fill it up your jellyfish needs to feed on the small shiny fish. The latter are fast and tricky to catch. Besides the depleting life bar, the deep blue see is filled with many sinister creatures wanting to gobble up our little adventurer. I was surprised anyone would actually want to eat a jellyfish, but a good deal of underwater creatures prefer jellyfish on their diet, including turtles, bearded goby and ocean sunfish. The inhabitants if Seashine look scary as hell, and they alone would have made a perfect challenge for the game. There are big creature that want to eat you, and poisonous mushrooms that spray toxins and deplete your life bar. Alas, it’s a war zone at the bottom of the ocean. 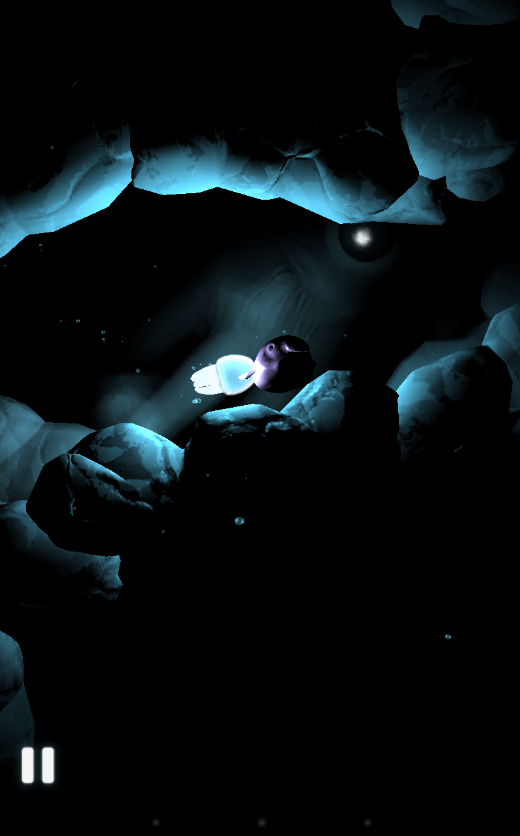 Seashine is, without a doubt, a hardcore twitch game, where you not only have to swipe continuously to survive, but also time your swipes, and direct them accordingly. This concoction requires more than just reflexes. You have to get the feel of the protagonist’s movement. I am nowhere near beating the introductory areas, and I have been struggling for three days. My young nephew does a little better – he plays with both hands (it looks easier when he does it). Yet, both of us got tired of the game pretty soon.

Another doubt that nags me is the luck, which seems to play one of the lead parts in this game difficulty-wise. What do you think?

I have read many wonderful reviews from the players, and quite a bunch of woeful reproaches. The fact makes me think that about a third of Seashine’s audience finds the game beautiful, but annoying. I might be wrong, that is just my assumption. Ah well, you can’t please them all. I can see where the good reviews are coming from – the hardcore twitch fans. I am with the other bunch, though, loving everything about Seashine but the gameplay part. It’s just too annoying to enjoy it. And it is so for a good reason – the market. 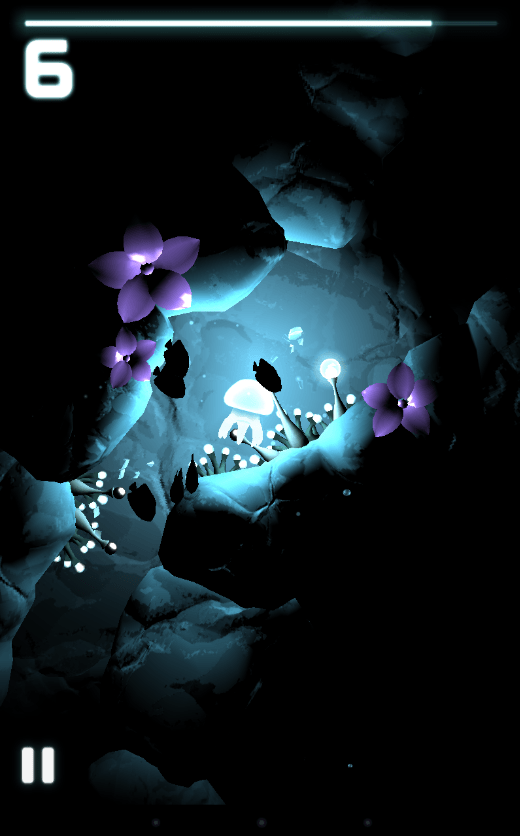 The life bar makes the gameplay a bad favor. Thing is, Seashine is freemium, and the developer aims to earn some revenue on IAPs to continue the game’s development and treat the fans to new perks and features, as well as port it to other platforms and PC. Truth be told, Seashine would have been a perfect treat if it were a $3 premium purchase, and no life bar whatsoever. It would have been wonderful to be able to float and look around, escaping a bunch of monsters once in a while. Alas, the game needs to compel you to spend some money on the stars, so it makes survival and progress nearly impossible without them. The IAPs aren’t numerous, but they aren’t permanent upgrades. The best deal is $3 per 200 stars. You need them to buy upgrades that boost your little friend’s capacity to survive, like resist intoxication or swim faster. You can also watch a video ad for 20 stars. I have no idea how much time it would take to grind for enough stars to buy the cheapest boost.

I do encourage you to support the one-man game studio, for Seashine is worth $3, even with its controversies. However, I don’t think I’d buy the 200 stars more than once. All things considered, I am hoping the current state of the game will eventually translate into a “hectic” mode, and we will see the exploration mode in the future, without the life bar limitation. The exploration mode could be an IAP or be included in a premium version of the game, but it absolutely has to be there.

Seashine is an elegant dance of light and darkness, with the darkness continuously prevailing. The narrow passages and obstacles, the predators and the ever fleeing light fish create a beautiful, vibrant and cruel world. This world is as sinister and inviting as the life itself – you can’t be a hero without taking risks. The sound score is ambient and again, suggesting a more of an exploration experience rather than a pointless death in the void. Paired with the hectic gameplay, however, Seashine becomes a suffocating experience.

Dazzling and graceful, Seashine is like Hitchcock’s silk stocking – looks good on a lady’s leg, but turns into a deadly knot around your neck unless your fingers are fast. 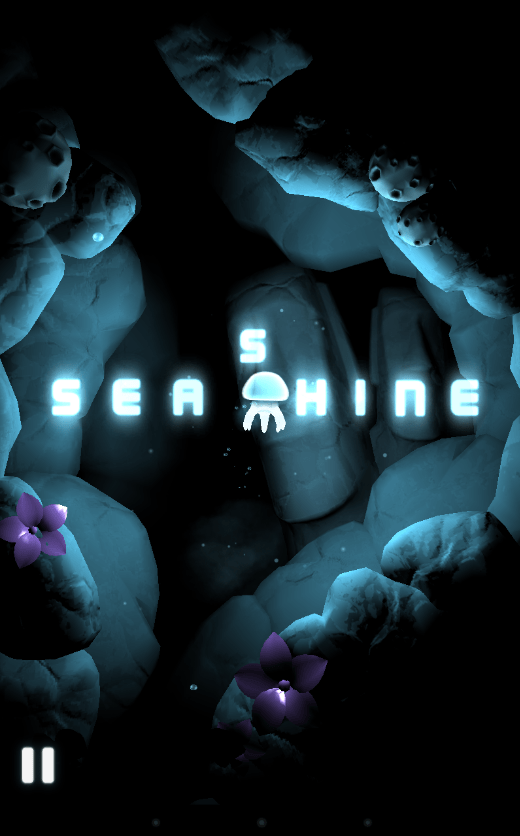 How do you feel about jellyfish? Do you admire its translucence and radial symmetry? Do you stare in wonder, marveling at its ethereal waltz through the dark void? Or, do you shudder at the very sight of its poisonous tentacles? Seashine is like jellyfish. It’s a stunner that hypnotizes with its luminescent beauty, but stings like hell with its punishing difficulty. All things considered, Seashine is an indie masterpiece that needs a few more touches to make it accessible for a larger audience – the casual players. A premium version with no life bar limitation would be a real joy.