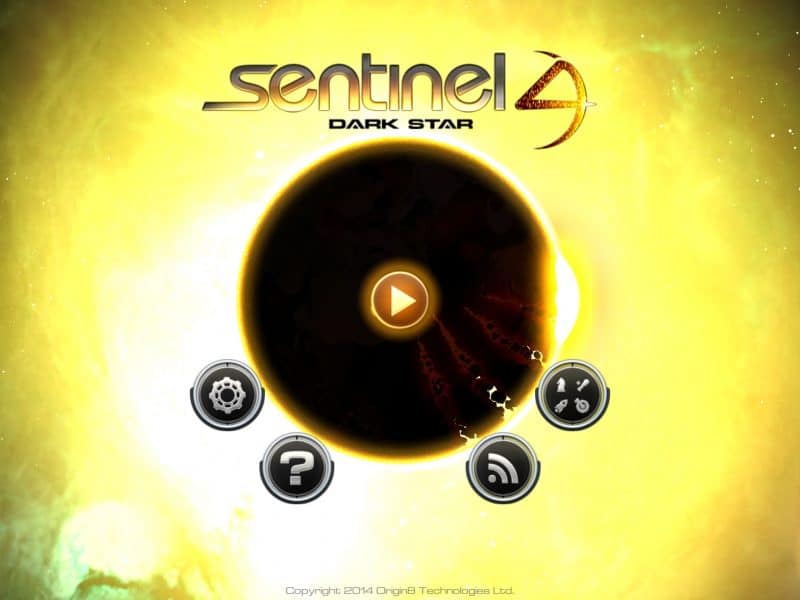 The fourth installment of the popular Sentinel series for iOS has arrived! Dark Star takes the tower defense series to all new areas with fresh units to deploy, and new enemies to defeat. Sentinel 4 has a long, rewarding campaign which you’ll want to play through a couple of times with varying difficulties to compensate for your upgraded artillery.

Overall this was a really great game, it was fun throughout the entire experience, and addicting to say the least. Let’s get started with the full review!

Compared to previous installments in the series, you can tell that Sentinel 4 has definitely improved over the years. That being said, there is still room for improvement in certain areas. The environments look really cool, but certain tiles that are used frequently could be a bit more appealing to the eye. Bullets, bombs, and explosions all look fantastic, and the game runs extremely smooth — which is a big plus for me. 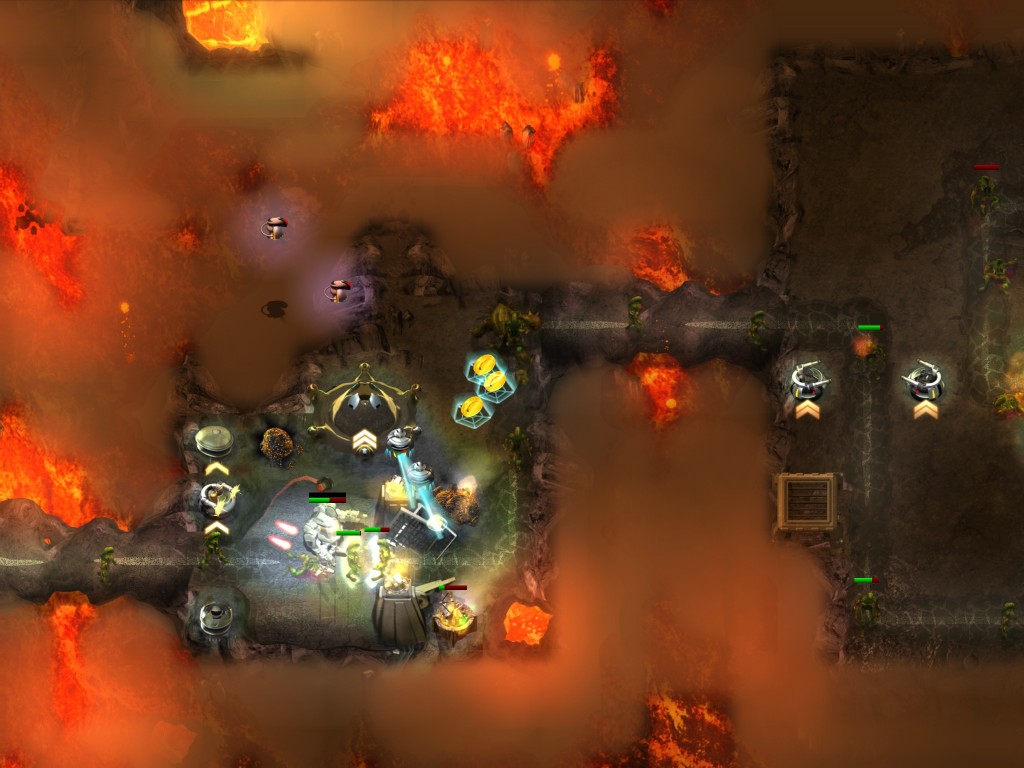 I wish there had been a bit more detail on the waves of enemies, some were better than others, and it was always interesting to see what the next boss was going to look like. Between all of the different units you can deploy, enemies you’ll encounter, and environments you’ll play on, there is plenty of visually changes to keep things fresh. It is clear that the Sentinel series knows how to deploy their graphics, but a bit more polishing and fine tuning wouldn’t hurt.

Sentinel 4: Dark Star, truly shines in the area of gameplay. This is an extremely in-depth tower defense game, unlike most of the others you’d find on the mobile market, or even on PC. Everything can be upgraded, and there are a variety of different tactics and strategies you’ll need to figure out in order to complete the game — especially on an increased difficulty. The basic concepts are pretty standard, certain units can attack ground, some attack air, and others attack both. There are a few twists and unique concepts as well, but the real reason it is so great is the customization. 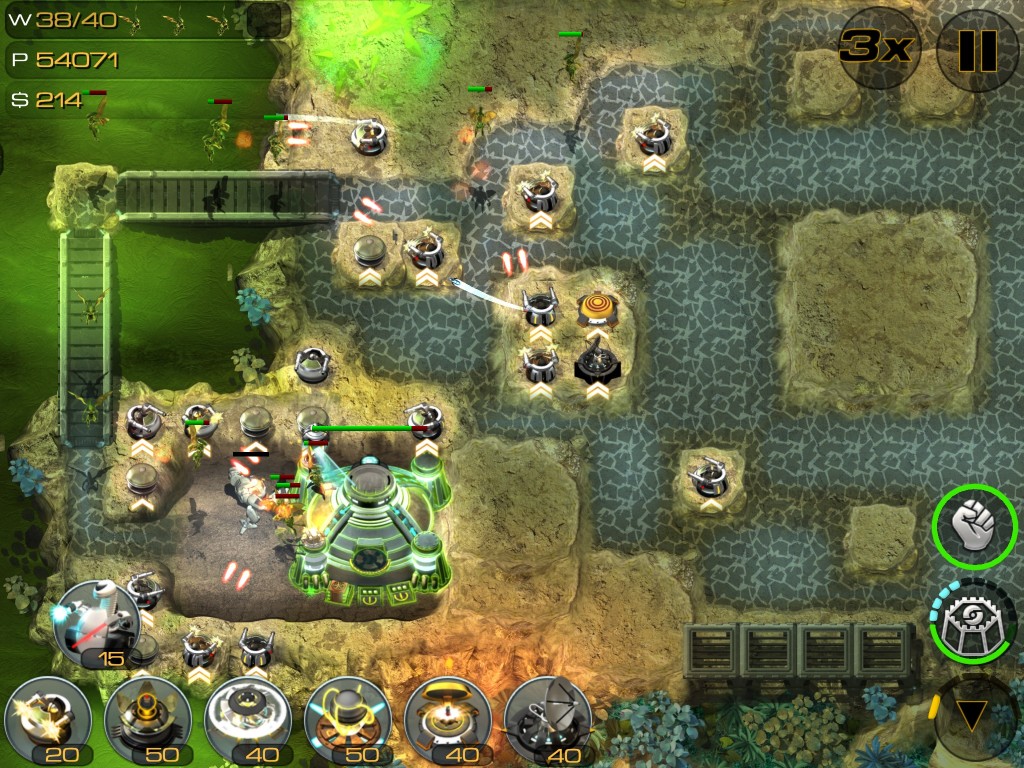 Each map is unique, and requires a different strategy. You can’t just load up on air defense turrets and hope that everything is OK, even if that might work on one level, it probably won’t on the next. Since each unit can also be upgraded, you’ll need to figure out the best time to upgrade them. One thing that makes this a little more important, is the fact that when you upgrade a unit it’s health is fully restored — so you need to decide whether you need the extra power now, or you can wait until it takes some more damage so you get the most out of your upgrade. That’s just one of the many little mechanics that Sentinel 4 uses to bring a change of pace to the genre.

Navigating the main menu to select a level, upgrade units, and fortify your structures, is really easy to do and none of the menus were confusing. Everything is pretty straight-forward, and the game does a good job of guiding you through the first few missions so you get the hang of it quick. Anyone who is familiar with tower defense games shouldn’t have a problem getting acquainted with Sentinel 4. The upgrade system is a bit overwhelming at first since everything is categorized differently, so I recommend taking your time to learn what upgrades you have available before you start spending your coins. 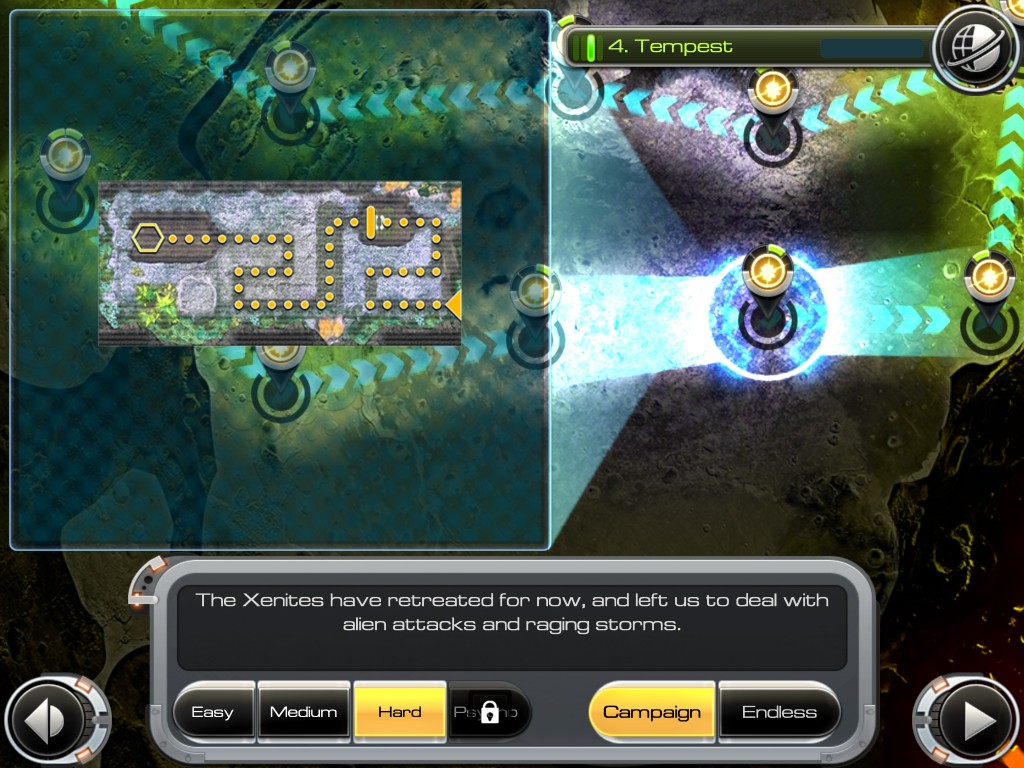 My problem with the Interface lies with-in the controls/gameplay. I didn’t have problems 100% of the time, but there were certain occasions where it was down-right difficult to upgrade the unit I want to at the time I want to. As I mentioned before, timely upgrades make a big difference, so this is something that needs to work smoothly. Fortunately you can pause the game at any time, so whenever I needed to make an important change I usually just paused the game. The problems I experienced were mainly not being able to tap on a certain unit when enemies/other units are nearby, although I also had a couple maps where the UI blocked some of my units.

This game definitely offers a lot of content to play through, especially for one in the tower defense genre. A long list of levels you can play in the main campaign, and each can be played in standard or endless mode. When you play through the game, you can start on any difficulty you want, but the previous level must be completed on hard to play on hard, or insane to play on insane. You can get by on hard mode on some of the earlier levels, but eventually you’ll either need to spend money on IAPs or switch to normal for a while. You’ll end up wanting to play through again on harder difficulties to try out your newly upgraded units and structures. 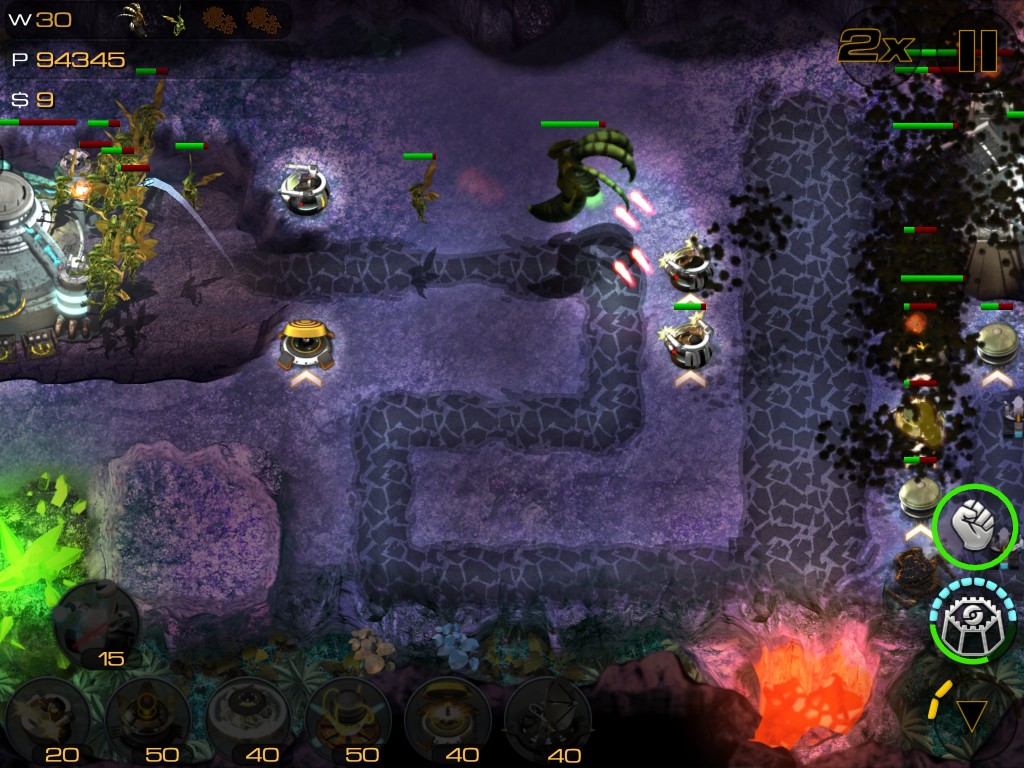 If there’s one thing that hindered the replay value from perfection, it’s that you don’t seem to earn coins quite as fast as you should. This is my opinion, and mainly based off of my skill at the game, but there were a few times that I just felt under-geared for my current level, even on normal. Even with multiple strategy adjustments it was tough, and just a bit too tough for a Normal difficulty. Still, this didn’t stop me from re-playing the levels until I was able to come up with the perfect strategy.

Fans of the Sentinel series, or the tower defense genre, will definitely applaud this game for continuing to change things up. The extensive customization and high emphasis on strategy is a breath of fresh air, compared to other tower defense games that just become a mindless repeated process after a while. It isn’t perfect, but it’s still a really great game.

Click here to check out Sentinel 4: Dark Star on the Apple App Store!

Thanks for checking out this review, and be sure to leave your thoughts in the comment section below!