The Shadow Sun from Ossian Studios was first announced in 2010, but released in late 2013 on iOS. Another year later, it finally lands on Android. Considering the highly acclaimed team of developers with a collective experience working on The Witcher, Baldur’s Gate and NeverWinter Nights, hardcore mobile RPG gamers were excited for this game. Its first lure was that it was never a mobile port of an existing PC game, but a totally new experience, with a new story, characters and gameplay. Four years is a long time, though, and Ossian Studios might have lingered a little too long because games like Aralon, RavenSword: Shadowlands and the Infinity Blade were released in the meantime, setting the benchmark, wowing the gamers and making it a little more difficult to impress gamers at the end of 2014.

Nonetheless, Shadow Sun is an impressive, complex and engrossing RPG truly worth of its price and honest with its promise of 10-15 hours of gameplay. Let us see the premise and all the bits and bobs that come with this solid entry.

The Shadow Sun is story-driven, and like any RPG, it creates a fantasy world to immerse the player in it. The story in TSS comprises both the present events and the historical retrospection revealed from time to time as you meet new characters. The North and the South are historically rivals, and as far as I understand at some point North was a dominating force on the planet until a meteor came crushing the Northern capital, covering the sunlight with dust clouds and destroying the agriculture, which eventually put an end to the empire. Since then, the South became an independent empire, which also shrunk in its sizes as the centuries went by.

Time-wise, TSS is more like ancient Egypt with elements of the contemporary popular themes – a plague that makes humans into blood-thirsty zombies, evil wizards, huge aggressive rats and spiders, supernatural and otherworldly creatures and sorcerers.

The premise of the game is an ambassadorial mission of the Northern kingdom to find out what happened to their diplomats in the South. The Southern kingdom, in its turn, is ravaged by a merciless plague that turns people into aggressive zombies.

Both rulers of the North and the South seem to have changed their policies within the last six months, after the arrival of new advisers to the courts, which appear to be some mysterious wizards who forced emperors to fire all the previous advisers. The Southerners are also avid followers of a religious fanatic calling to exterminate all infidels, Northerners including.

The elite of the Southern kingdom, Shar, lead a decadent life in the stark contrast to the disgusting poverty and atrocious slavery of the 95% of the population. The Northerners believe them to be barbarians, which is pretty spot on, since the entire area of the city of Shar and its surroundings is a hostile land full of thieves, rapists, murderers, zombies and fat-bloated rulers. 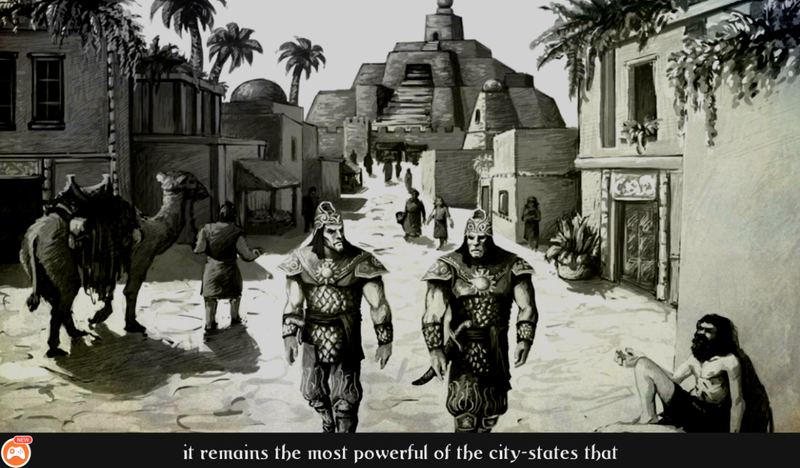 The first thing you do is create your character by either crafting him or her from scratch or choosing from one of the pre-made characters. The choice is great, whichever option you choose, but the ultimate triad of mage, rogue and warrior archetypes sets solid limits, and even though you will develop your character through a branched out system of abilities, weapons, and traits, they will be as archetypal as in the beginning.

You will have up to four companions, with the first and most outstanding being a woman archer who can also become your personal buddy because the choices you make through the conversations will let you have short talks with her and develop a relationship. As the game progresses, you also make friends with a large dog that becomes you body-guard, and a couple of other characters that join you due to ideological reasoning.

You can have only one companion assist you in combat, though, but each companion comes with differing abilities and strong points, so if one is not sufficient to get you through a battle, you can save and rewind to an earlier stage to choose a different companion.

There is one major plot that tasks you with discovering where your ambassadors are, release them, stay alive and keep your companions alive and go home. However, the sense of urgency to accomplish the mission is a mere nag because the game does not let you do just that.

The thing is you need money to buy stuff like potions, weapons, food and wine, and even though you will loot the coins from the zombies you kill and the robbers, the coins are mostly hard to come by.

As a result, you are distracted by one side-quest after another just to get some loot and coin. On the one hand, it is good because it adds a whole load of gameplay hours and if you like it, there is nothing wrong with wandering around, discovering more locations from the existing 70+ and consuming some of the 200+ items listed by the developers. On the other hand, side-quests may feel a bit boring and distracting, or limiting.

Finally, RPG hardcore gamers will enjoy, and everyone else will hate, the fact that once you are on a quest, the game does not really tell you where to go or what to do – you have to discover that for yourself. The characters and items you can interact with are highlighted, but that’s it, which occasionally can put you in a situation you are not prepared to deal with, yet.

Luckily, TSS does not have you slashing and swiping at your enemies. Instead, you have two main buttons – move joystick on the left and battle button on the right. The joystick is a little more responsive than I like, but you will get the hang of it. Press and hold the battle button to block opponent’s attack, or tap and watch your character fight.

You will need to move around, though, just not to miss any foes crawling behind your back. Camera-wise, you can have it move automatically, but it is largely insufficient since it will sometimes zoom into your character’s face or back of the head, or a wall. Tap and hold and move to pan the camera, but make sure not to make any sharp moves because it gets a bit hectic. Those are really minor complaints and the more you play, the more you get used to those peculiarities.

In combat, you can pause everything by tapping on your companion’s icon. From there, you can choose whatever action you want your companion to accomplish. Some boss battles may seem too easy for RPG fans, but will satiate the less savvy gamers.

If there is one missing feature in the open-world battle system of TSS is the option to flee the battle if you feel you come unprepared, or you know forces are not even.

The fight button, located at the bottom right corner, is also contextual, and turns into a conversation button whenever you can have a chat with characters or your pet.

As for the rest of the UI, it is rather jammed and takes some time to sort out. For one, finding a Map is not a one-tap action. I did not find the way armor and weapons were organized in the most user-friendly way, but the amount of inventory and character customization options and skill points is what RPG fans would expect and enjoy. So, sorting out the journal, skills, inventory and all those bits and bobs is either the price you pay to play the game well, or a part of the gameplay you genuinely enjoy.

TSS 3D design was built on Unity, so at the one hand, it has its points that really shine – environments. Golden temples, armor and interior of the elite’s dwellings are truly impressive, with vibrant colors and detailed rendering. Subterranean maze is also well performed, as well as some surface locations. Others are not so impressive, but what is downright disappointing is the way characters are rendered.

It beats me why everyone in this game is so ugly – from the main characters to companions and each and every character you meet and interact with, including your dog companion. They are blocky, pixelated, with unnaturally thick necks, and ultimately many of them look alike.

Which brings us to the next point – the game sports some explicit verbiage, a lot of terror and blood, and a promise of romance at some point, so I would not recommend it to younger gamers. However, the way everyone here looks unattractive, even though you can create your guy or girl from scratch, adds one more point to the ‘boring’ box.

What I liked most of all was the black and white art work at the beginning and in between the scenes.

There are parts that boast off complete voice overs while in their majority, the dialogues are written and barely voiced. Arabic music is great, but what creates the atmosphere is the meticulously crafted sound score that follows the gameplay – sounds of the wind blowing, bones cracking, blades clinging, zombies groaning, prisoners moaning and the like.

The premium games that come with in-app purchases may expect user woes, but this is not the case with TSS. There are three starter packs for mage, warrior and rogue you can buy optionally for $0.99. Those contain some custom weapons, armor and a special quest for your character. Available also is a detailed guide that contains a complete walk-through of the game.

Android users report some performance issues, and although they are largely inconsistent and vary from one report to another, it seems like they all have to do with the game’s graphics that might be too heavy for some devices. In my experience, my first character’s gameplay was haunted by glitches in the visual department while my second hero’s gameplay was as smooth as it should be.

If you experience problems, you can try lowering the graphics quality from the game’s settings. If that does not help, contact the support – they seem to be responsive in solving user complaints.

The Shadow Sun makes a perfect Christmas gift of a mobile game to any grown-up RPG fan playing on mobile. It is not some mobile port of a PC game, but a truly original fantasy world created with great care and talent. Its Android port may have some minor technical issues, and the rendering of the characters may leave us wanting something prettier while the multitude of side-quests may bore some players, but the game itself is thoroughly entertaining, deep and content-rich. By far, TSS is one of the finest RPGs you can currently buy for your tablet, and it is certainly worth its price.