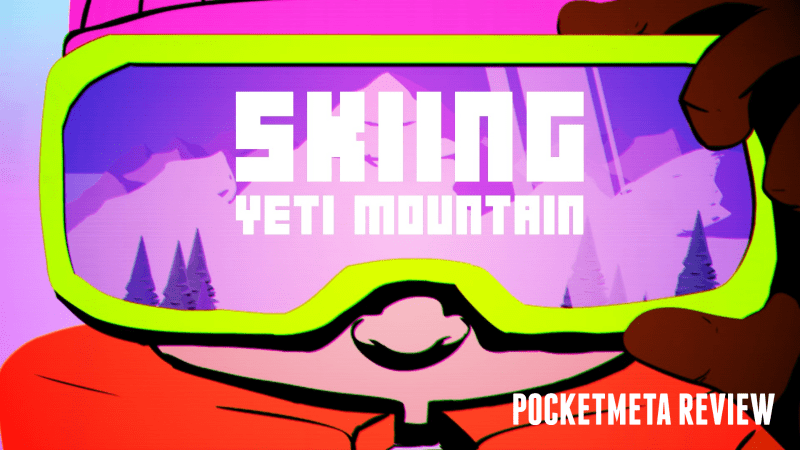 Skiing Yeti Mountain appeals to two player categories – those looking for a simple yet enjoyable time killer and the skiing enthusiasts. The game is perfectly snack-able and shows its best when played in short sessions rather than when you have a whole evening to dedicate to mobile entertainment. It also brings to life the emotions and feelings of carving down a slope, with its perfectly realistic sound effects and simple, intuitive control system.

You won’t need to pay much attention to the game’s story, although there is some, its unraveling takes so long you’d probably forget all about it by the time you get the crumbs of it. What matters here is the realism of skiing down a mountain, despite the faux retro pixel art.

So, you control a bite-sized hero on his way down the mountain. Even though he came looking for the titular Yeti, he has to take a course of slalom to survive the adventure. You’d probably kill him a few times before you master the moves, but it happens within the first few levels – trust me.

Tap and hold at the bottom of the screen and gently guide your avatar down the mountain. There are arrow flags all along it, which mark on which side of the flag you need to slide – you know, as in sports skiing. You can’t ignore those because when you do – game over.

Hence, the main pleasure of the gameplay is wonderfully aligned with the pleasure of a first-time skier as they learn the moves and get exhilarated by success. You can make some turns gentle and elegant while other times you need to make harsh carves to avoid trees, get on the right side of a flag, or let a passing wildlife cross the slope. At some point, the game introduces ice and deep snow, which affect your speed and maneuverability. It’s all delightfully realistic, and if you missed that winter skiing already, you will dig the gameplay of Skiing Yeti Mountain.

The difficulty depends on how well you want to do, and it’s great. Skiing Yeti Mountain is accessible for the laid-back player wanting to just kill some time without any regard to the score. At the same time, the persistent player will find just the right challenge to score all-gold on levels to unlock extra challenges. However, there is no shortage of levels and the difficulty increases quite gradually, which hits the sweet spot of the casual sports game niche.

As you play, the game challenges you to complete each level in a limited time frame. If you get the golden medal, you eventually unlock new gear and can customize your skier’s head bands, suits and skiing gear. They do not enhance his performance or speed, but add a bit of a variety to gameplay and a rewarding feeling of accomplishment.

You can ignore the objective of scoring gold in every level – it will affect how often you unlock the gear and extra challenges. Those extras let you compete for the black skull rewards, and you unlock those levels when you reach a certain experience benchmark.

Hence, the more gold you score, the faster you gain XP, the more extra content you unlock.

That said, as fun and intuitive the gameplay is, Skiing Yeti Mountain is just a time killer, although an ingenious one. It’s good to have it when you want to shut down your mind from the billboards outside your train window, but it quickly gets boring if you take it to your favorite armchair.

Its story is fun and I appreciate the good deal of humor put into it – you will meet the weird and funny characters that add some narration to the story. If you pay attention, some of them get eaten. Nonetheless, the story does not seem to have an ending, especially if you consider the 800+ levels in Skiing Yeti Mountain. So, my guess it’s just a nice artistic touch to the core of the game – skiing.

Skiing Yeti Mountain is a pixel-styled faux retro tale, which is quite funny, lovely and attractive just as much as to let you get hooked on its mechanic. The sound score adds a ton to its realism and addiction factor. Even though I wouldn’t call it a beauty, it’s still a pretty confident contestant on my time killing games of the year list.

What cemented my pro-Skiing Yeti Mountain position is its digestible monetization model that does something very few games do – respect its players. You do not get bombarded by ads, and they are introduced in funny, creative ways that feel like a part of the gameplay, as surprising as it sounds. There is one $3 IAP that removes ads, which feels somewhat overpriced, but consider supporting the devs, especially their noble charity intentions.

Skiing Yeti Mountain nails the skiing mechanic in a simple, intuitive, yet challenging gameplay that is perfect when consumed in small doses. Its pixel art is subtle and attractive while the sound score reproduces the realism of carving down the slope. The game offers a moderate amount of cosmetic RPG-like customization and unlockables, global leader boards for the competitive and extra content for the golden champions – all of which adds to the replay value. It’s an excellent time killer while its novelty is fresh.