One of the more highly anticipated mobile games of the year was definitely Skullduggery, after a few very intriguing gameplay videos. The platformer was released to the App Store this week, and despite a rather hefty price tag considering the genre, it has seen great success already — and rightfully so. It’s one of the most unique games of the year, and offers intense Gameplay from start to finish. First I get to play Crimsonlands this week, and now this? Could it get any better?

Skullduggery is a game with extremely well designed visuals, and a great variety of objects/NPCs that you encounter along your journey through the campaign. You play as an IRS agent, who just so happens to be a Skull, and you’re tasked with the job of collecting from un-deadbeats who owe taxes. There are 24 different levels, each with a unique course, and with it’s own special set of obstacles you need to be ready for.

As you progress through the game, you’ll encounter all kinds of different things — skeletons with baseball bats, skeletons with guns, giant skulls, wrecking balls, and so much more. Most of this stuff is not only visually unique, but also has a very unique role in how the level plays out. Since the game is able to refrain from ever going visually stale, it helps keep up the intensity factor throughout the campaign.

Each level also has three unique artifacts contained in treasure chests that are optional to collect, but worth it just to see what kind of stuff is hidden on the map. As you play through the game, you’re also accompanied by a great soundtrack that is fitting and definitely not annoying like some soundtracks.

You play the game by launching your skull in any direction, in order to progress through the level and collect coins, treasure, and artifacts. There is no restriction on how much times you can launch your skull, or even how often you can launch it. Every time you pull the brain back to launch, the game goes into slow motion — if it didn’t, let’s just say it would be next to impossible to find all of the collectibles, or even complete some of the levels.

Not only will you be trying to navigate through obstacles, but you’ll also encounter live (well, sorta) enemies from time to time, which you can kill by hitting them without getting hit yourself. Some have melee weapons, others have guns — and extremely good accuracy, too. Although, these enemies aren’t the only thing that could be your demise, there’s also a lot of times where a fast moving wall is right on your tail, and can quickly smash your skull if you get caught between another wall. 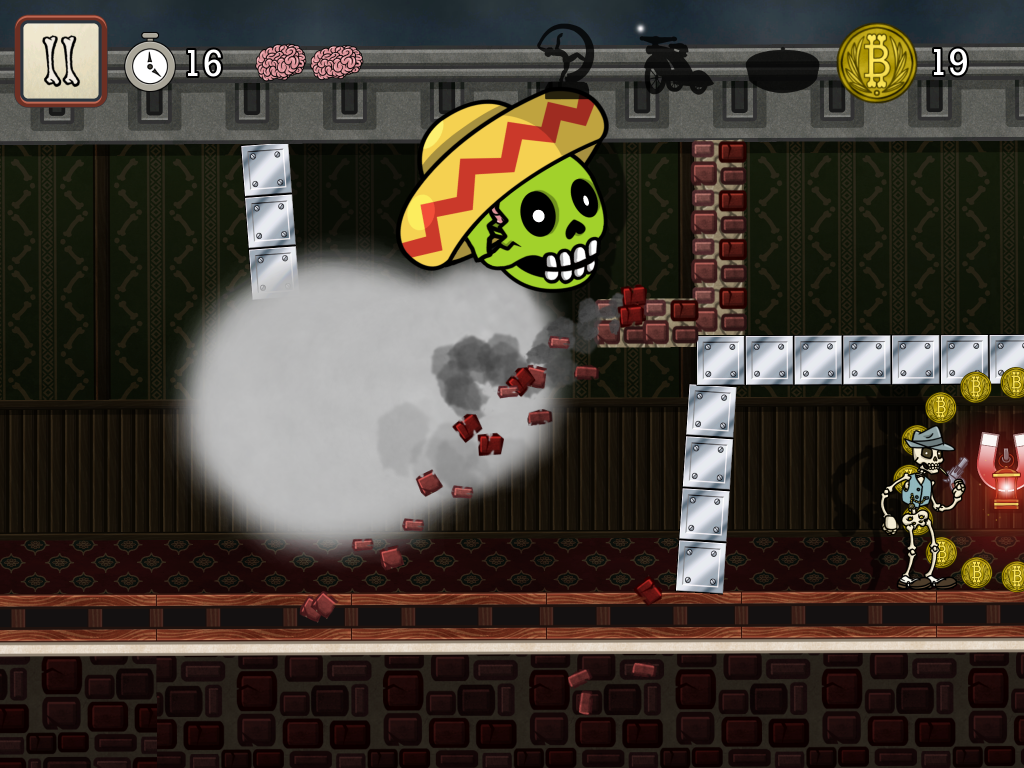 When you’re being wall chased, there’s usually a ton of gems and other loot to entice you along the way. It’s pretty hard to collect all of the loot, but trying to stay in slow motion as much as you can really helps. There’s plenty of other mechanics that you’ll need to learn throughout the game, but I appreciated how they spread these out, and don’t necessarily utilize every known mechanic with each progressing level.

You’ll want to play it again

Even though there’s only two game modes — the main campaign and a head to head mode, there’s still a good amount of replay value here. You don’t really ever upgrade your skull to make the game easier, but a lot of the goals for individual levels require focus on one at a time. Meaning, you can’t really play most of these levels and expect to collect all of the coins, all of the artifacts, and complete each of the three unique goals at the same time.

I played through the campaign, just trying to complete every level, and not necessarily working on any goals. After that, I went back and played through the levels which I didn’t complete any goals for, and then finally started working on full completion (still working on that, with quite a ways to go). There isn’t a whole lot to reward you for your dedication, other than different skins for your skull, which may be one of the very few downfalls of Skullduggery.

Still, the game is practically flawless in every area with the exception of Replay Value, but I’m sure there’s a crowd out there that could find enjoyment in this one for months. 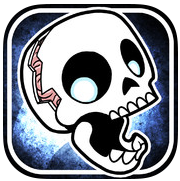 A wonderfully unique experience that keeps you highly entertained throughout the wild ride. Despite a rather short campaign, there are plenty of reasons to go back and play through each level multiple times. It’s one of the most innovative Platformers, if not the most, to hit the app store in a long time. This is definitely a contender for game of the year in 2014, and might even rank higher than Smash Hit — even though I gave that game a perfect score.