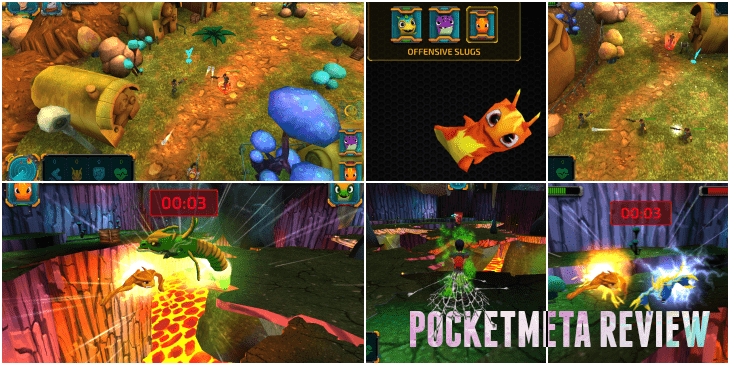 Truth be told, whenever I unwrap a movie-based game on mobile, I hold my breath because more often than not they turn out to be boring and lackluster. Nonetheless, Apps Ministry unleashed a very competent action-platformer with basic RPG elements, a very decent replay value and a surprisingly neat monetization model. Better yet, the game is fun even if you don’t follow the show, and are older than 13. Check it out. 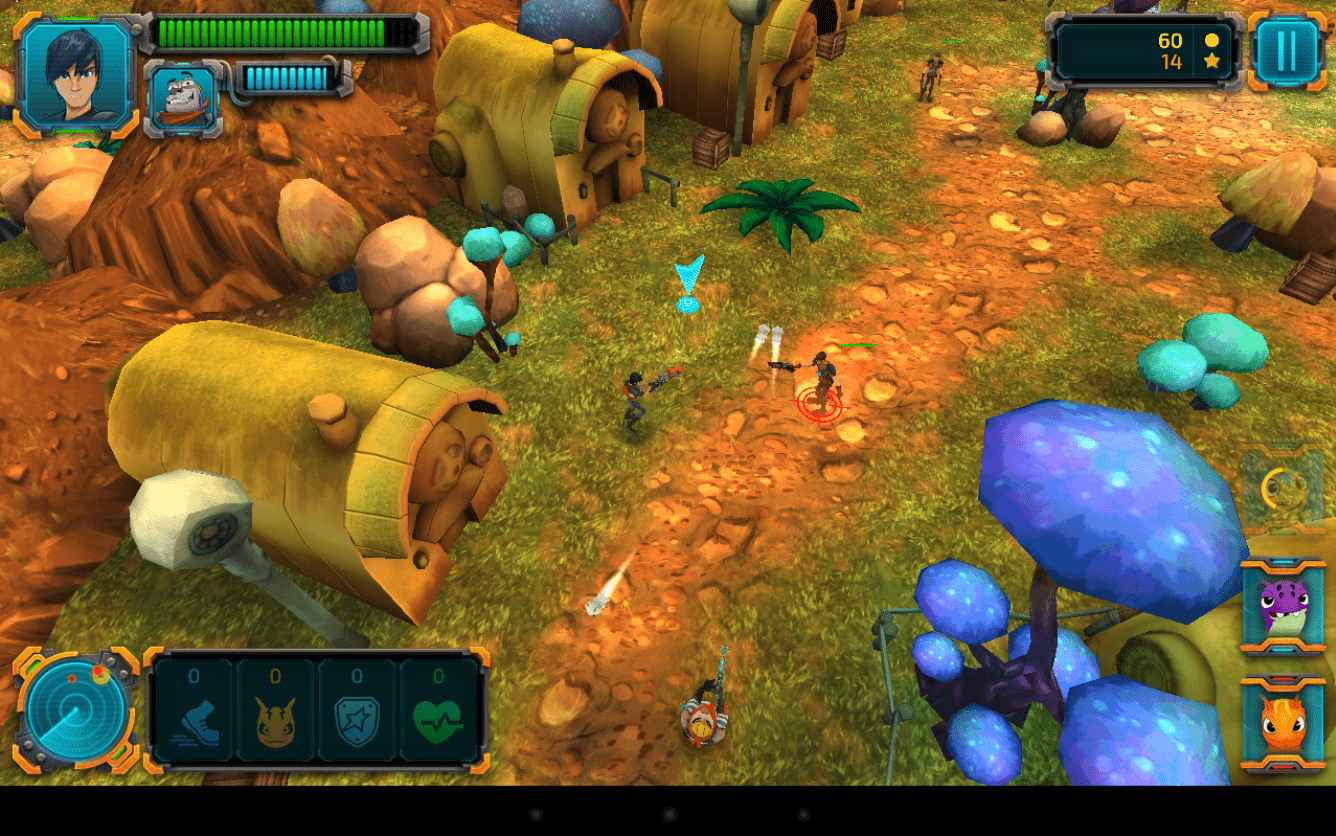 If you heard nothing about Slugterra, you are most likely older than 13 or don’t follow your kids’ interests. My nephew is obsessed with slugs, and when I asked him what was so special about them, he said they were bad-ass and introduced me to Disney XD’s Slugterra TV show that is already airing some sixth season, no more no less.

I am not following the series, but when I spotted Slugterra Dark Waters on the app store, I knew I had to try it because I was looking for some good-looking and fun movie tie-in games for mobile. 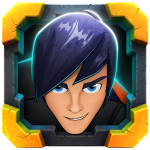 The first appeal of the game is it does not really require you to know the story of the eponymous animated TV series. You can, of course, watch an episode or two if you like, but it won’t affect the gameplay, unless you want to know what the slugs are and what is the big idea with the dark water.

Slugterra is an underground world made of 99 caves, and even though the land looks bright and sunny, it is still located somewhere at the core of the planet. 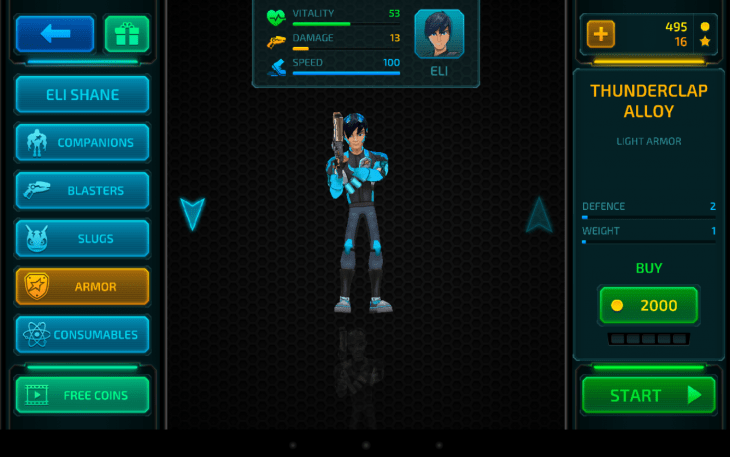 The protagonist is Eli Shane, a youngster who has been trained to tame slugs and fight other folks on the arena. The slugs are thankfully not the kind you’d see consuming human flesh in Hannibal, but nonetheless may induce a shiver down your spine when you think of what they are. However, despite being slugs, they are also supercharged weapons, and when you load them in your blaster, they deal a variety of damage effects on your enemy and on their slugs. They were also made very cute. Their powers are based on the energy and the four forces of the planet – fire, water, air and ground.

Now, the bad guy is some Doctor Blekk, who has build many factories to produce the dark water, which would enable him to capture all the slugs and turn them into his mindless slaves. So, Eli and his companions have to fight Blekk’s thugs and protect the 99 caves from the oppression.

You play as Eli, and before you can get to the action the game will lead you through a tutorial and teach you how to move, shoot, battle on the arena. It’s all very intuitive, but don’t swear because of the tutorial – the game wants to grab a wider spectrum of the audience, including the younger players.

Next, you are presented with three parts of the gameplay – 13 levels, 4 arenas, customization, and each part is thoroughly entertaining to keep you coming back for more. 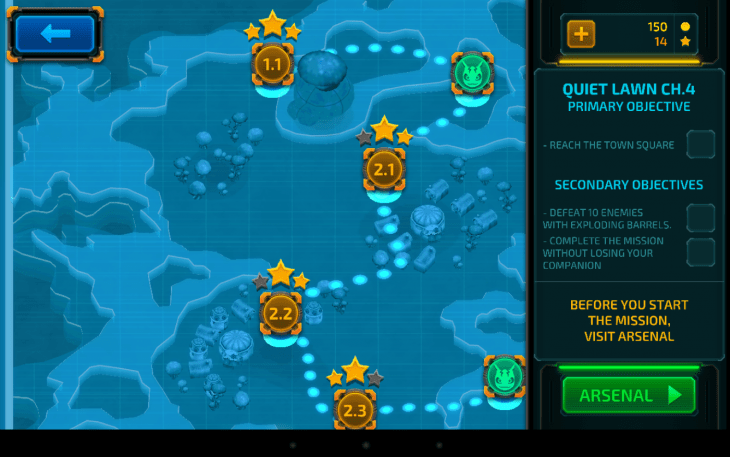 The developers at Apps Ministry knew well the non-Slugterra audience would be downloading the game, so thankfully we don’t have to know the ABCs of the Slug universe, and the game is a faux isometric 3D action platformer with some enjoyable RPG elements and accessible difficulty.

You walk along different areas destroying the thugs and all sorts of crates and boxes. You do so by firing your blaster at them, or by manually throwing slugs at them. Each item and each enemy you take down convert into a handful of coins – collect those. 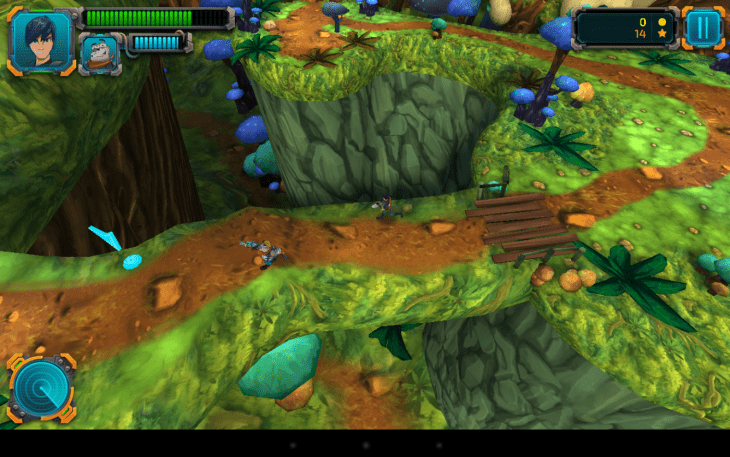 But before you get to the missions you need to go through the customization part, and it’s not overwhelming, but fun enough not to bore those who do not like the extensive skill trees and too much micromanagement. You have the Companions, Blasters, Ammo, Slugs, and Consumables to configure.

The default companion is Pronto, a sort of a fat squirrel with a gun. You can unlock four more companions as you play, and that’s why you need to collect the coins. Pronto is goofy but quick, so he can stay up and running for quite a long time if you don’t get him shot by a direct hit too many times. 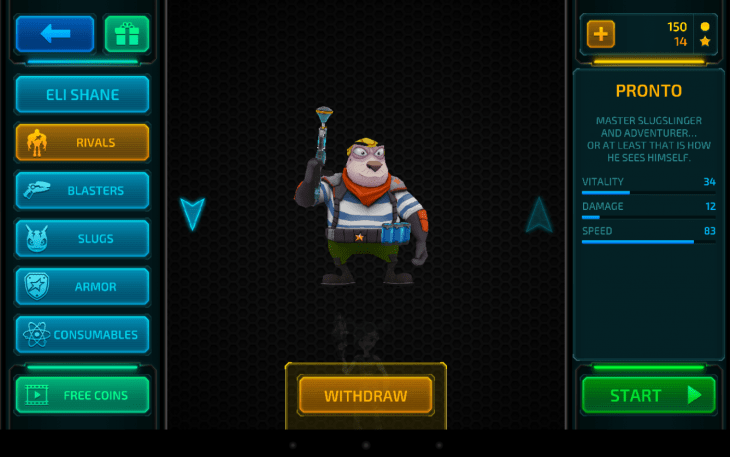 The unlockables make for another fun part of the gameplay because the faster shoes or the stronger alloy make a difference in the gameplay, as well as the better blasters and upgraded slugs. The best part here is you can unlock the things you want without paying in real money, more on that later.

The slugs come in a great variety. The default Infurnus is an extremely rare and powerful fire slug that sets the enemy on fire. Arachnet is a mix of a slug and a spider, so it shoots green web around its prey and immobilizes it for a while. Geoshard is a special slug that will power Eli while Neotox poisons the target.

However, you can’t just fire the slugs all the time – they have a cool down timer to rest and recharge. Even though it’s not too long, some 5-10 seconds, but you can speed it up by giving them food. Provided the cool down timers are short and some critical situations need quick acting on your part, the snack packs don’t always save the day. You can find the slug food packs in the Consumables part of your Arsenal, along with the Health Kits, and those do save the day.

When you take hits your health bear decreases and you may not make it till the end of the mission. So, a small or large pack of health kits is always a handy consumable recommended for every mission.

Health kits seem imperative and more important than the ammo upgrades, but the latter sure look good. However, the key to success is in the controls. 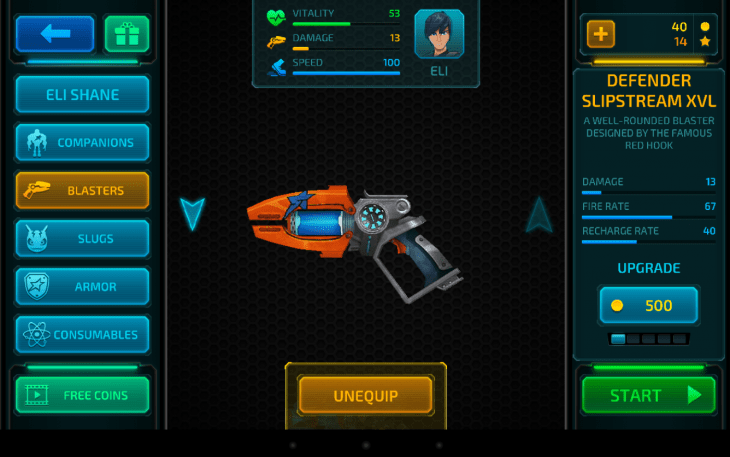 While in the Missions, you play from the third-person perspective and you move by tapping where you want to move. It’s easy because you see exactly where you’ve tapped thanks to the blue arrow. Likewise, you tap on a target to shoot at it, and here comes the tricky part. Your blaster does not just auto-fire non-stop, there is a slight delay between the shots, some kind of cool down timer. So, make sure your target has not moved from the spot it was on by the time you fire that second or third shot. Otherwise, you can miss.

At the same time, if you choose to manually launch a slug, it will auto-aim and hit the target for sure – just remember they have to recharge. Sometimes, the companion does a great deal of your job, if he doesn’t get shot directly too many times. 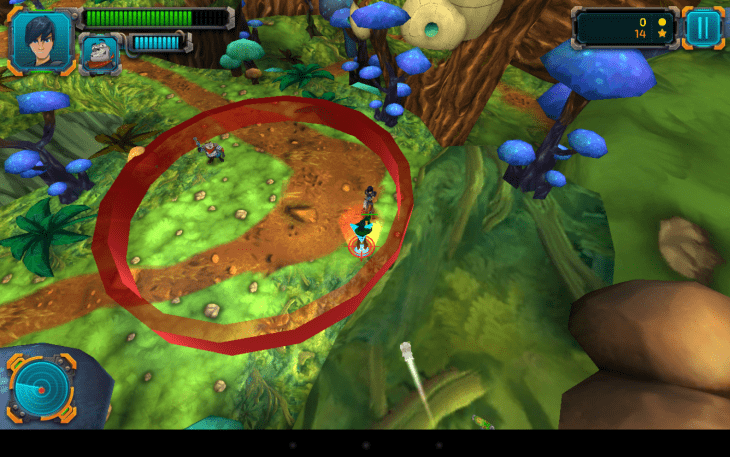 Arena is different – here you play from the first-person perspective and besides moving left and right by touching the onscreen buttons or by swiping left and right, you launch the slug and direct it to the moving target. Sometimes it is not so easy to achieve and the slug can miss, but it surely is fun to direct it as it flies.

In fact, the Arena battles make moving one of the most important aspects to dodge the enemy slugs, while directing your slugs is essential to hitting the moving target. 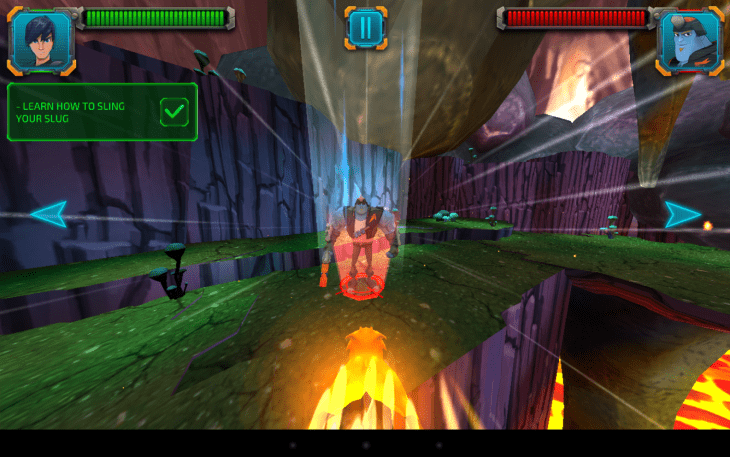 Sometimes, two slugs, yours and that of your opponent, meet in mid-air and that’s when a mini-game, or a mini-battle between them occurs and you have to tap as fast as you can to energize your slug to defeat the enemy slug. 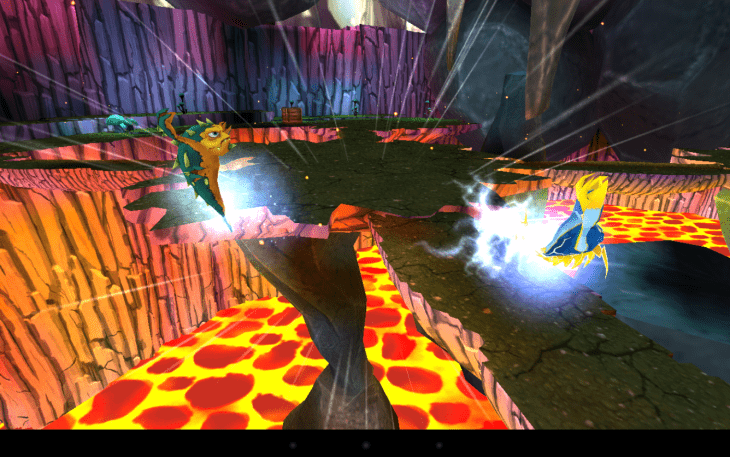 A key to success here is to try to explore the locations as much as possible, instead of just rushing through them blasting the thugs. This is the best way to complete all the objectives in a mission and earn a lot of coins. Exploration is also the fun part and I suggest you do not ignore it. 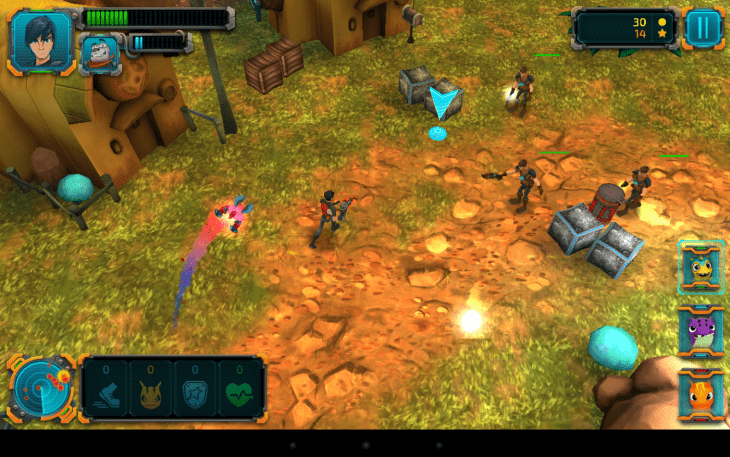 There is enough variety in the missions locations and the arena battles to keep that exploration interesting and visually appealing. You might not expect this kind of polish and depth from a free game, but Dark Waters proves there can be quality behind a freemium title that does not give you peptic ulcer with its IAPs. The game looks gorgeous and obviously a lot of love has been invested in its art. 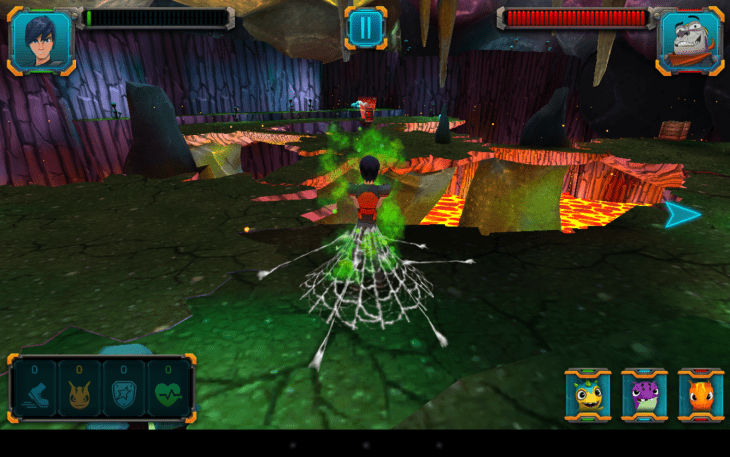 The freemium model in Slugterra Dark Waters is quite well implemented and is never annoying or interfering. There is only in-game currency – the golden coins that buy you ammo, blasters, slugs, companions and consumables, as well as upgrades the said items. You earn the coins by completing the missions, but you lose them if you quit a mission before that.

As usual, each mission has a set number of objectives beside the primary objective to reach the end of the location, and it is wise to accomplish those side missions to accumulate more coins. Sometimes it’s completing a mission without using a health kit, destroying a structure, or blasting off some boxes and gas cans.

Completing each mission gives you just enough coins to buy something new or make a significant upgrade, so you never feel like the grinding is obnoxious. In fact, there are also optional video ads that add 100 extra coins for watching, and sometimes you can watch them 3 or 4 times straight to accumulate enough coins for a bigger purchase without going through previous missions again. As I said, these ads are optional, and if you choose to avoid them, nothing will interfere with your gameplay. Overall, you never feel like a beggar with a handful of cheap in-game currency insufficient to do anything in the game. On the contrary, you get enough to progress steadily, but if you want it all and now, you can also choose to spend real money via IAPs, which do not seem too expensive, either. 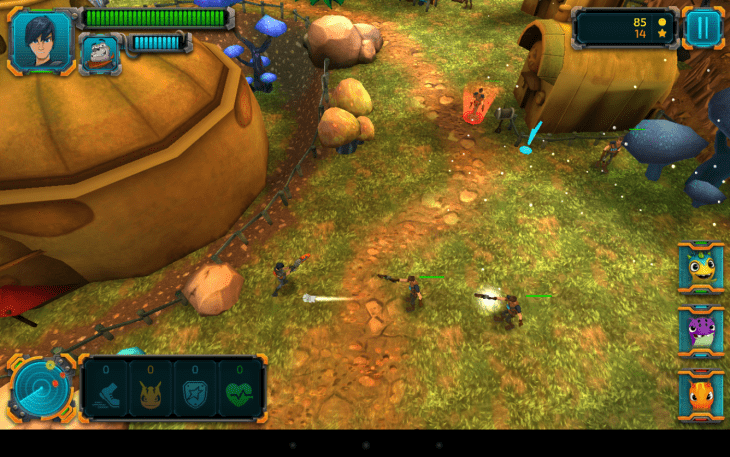 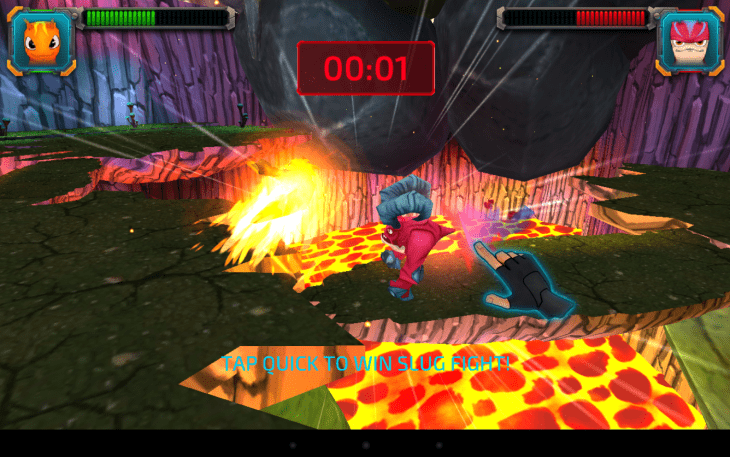 Even though the gameplay does not introduce any novel ideas or mechanics, Dark Waters is quite an engrossing and accessible action platformer with a few RPG elements that make unlocking all the gear and slugs a challenge you would want to accomplish. Some might complain 13 missions and 4 arena battles aren’t enough, but provided you can play them for free and the developer suggests there would be frequent expansions, it is well worth playing. You do not need to study the story line of the TV show to play it, nor will the game tempt you to watch it, but the gameplay is nonetheless fun. More so, if you are a Slugterra fan. Do not expect any depth from the dialogues, but the visuals are impressive and the game is very well optimized for mobile, even the older models.

We recommend Slugterra Dark Waters to any action-platformer fans who like to run around, shoot some thugs, explore the beautiful locations and face off the rivals on steaming hot arenas. A wise approach to the freemium model paired with a well-developed gameplay is enough to make the game stand out from the crowd and let the players enjoy it.