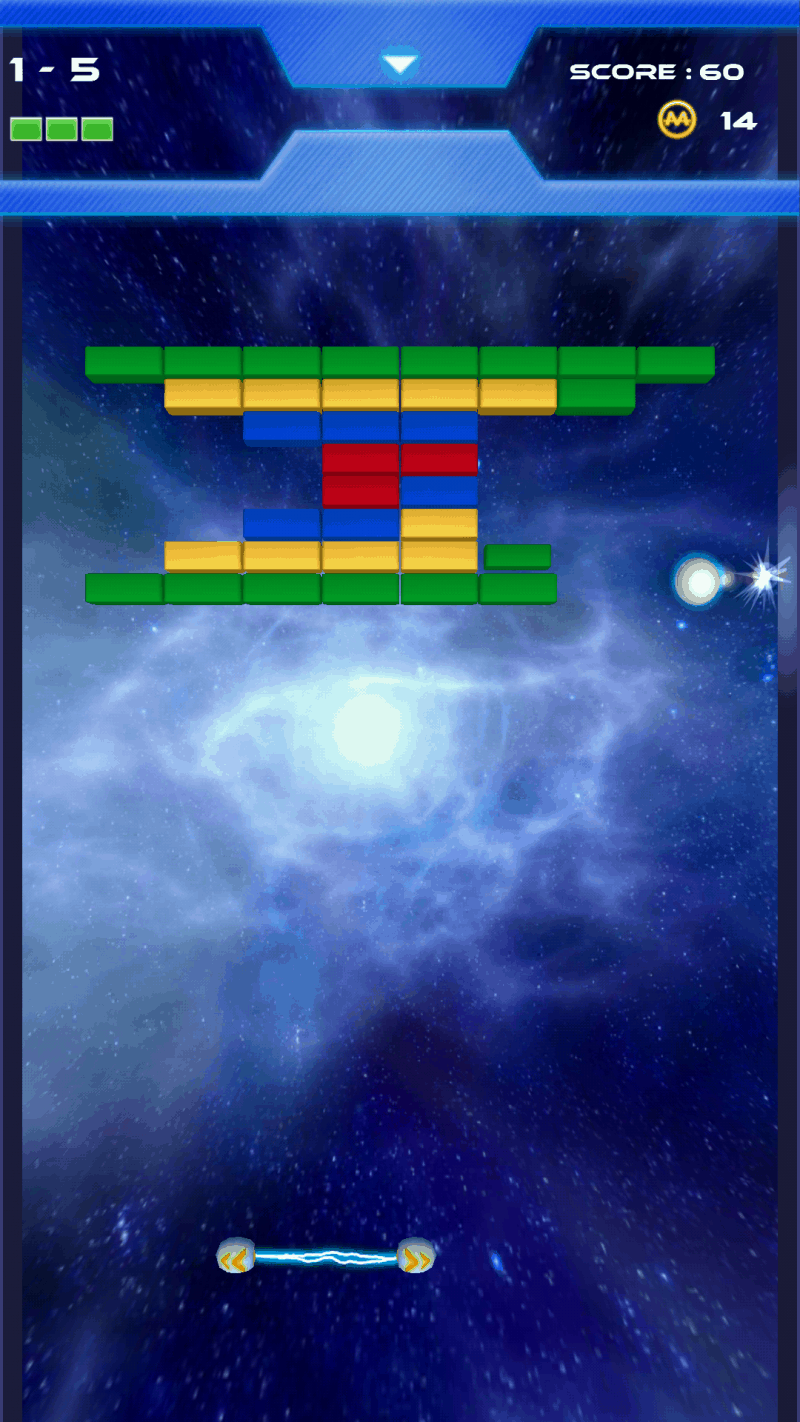 The concept of the game Smash has been around for ages, at it’s core, it’s essentially playing pong against a wall of bricks and trying to hit every single brick. Over the years there have been so many variations of this concept, and some of them are really great — while a lot of them are just the exact same game with a different brand. I found Smash on the Play Store and was excited to see if it was going to have something special to offer. Judging by it’s cover, Smash was created a reputable developer (Magma Mobile), has multiple play modes, and sports a simple upgrade system.  Read on for the full review!

Graphics are never really a high point for games of this genre, and that’s not what I was looking for, but at the very least the game needs to have smooth visuals. Smash is pretty consistent with it’s graphics, but there’s really nothing that excels or stands out — it’s all pretty standard. It isn’t that anything is poorly designed, it’s just pretty obvious that there wasn’t a whole lot of time spent detailing the graphics. You can definitely notice the lack of detail a whole lot more when playing on a tablet, but on phones it’s not terrible. 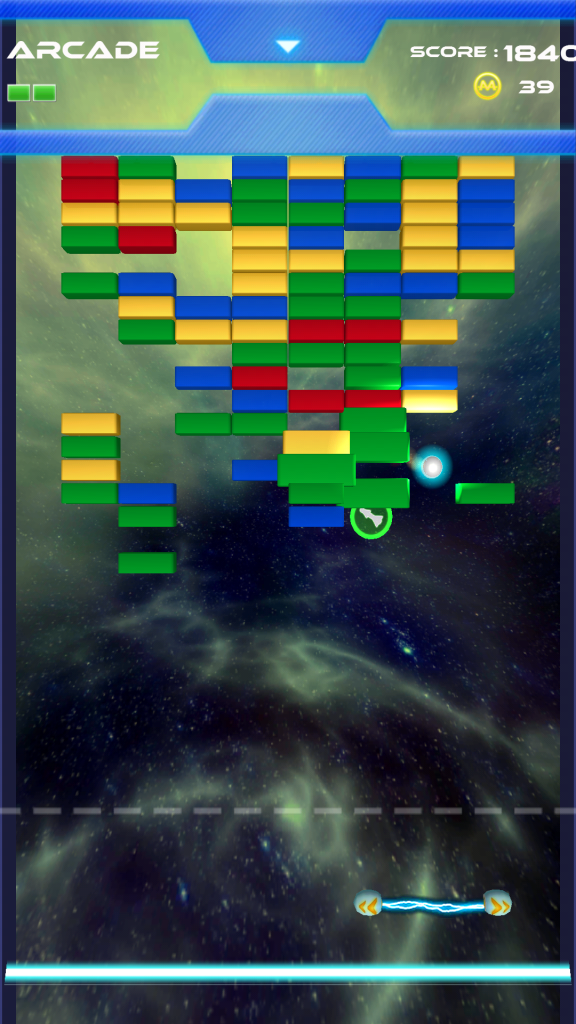 The interface isn’t anything to brag about either, with the highlight of the menu screens being the upgrade area. However, there’s really only a couple menu screens in total, so there’s not much to even take into account visually. If Smash was anything but a brick breaker, it probably couldn’t get by with these graphics, but fortunately the game is fast paced enough to where it doesn’t make a whole lot of difference as long as the visuals aren’t an eye sore — and they aren’t in this case.

Players are given two different game modes to play, you could either play through all of the levels in the game with increasing difficulty, or step into the arcade mode — which is essentially just an endless mode. All the while you’ll be collecting “M” points, which can be used to upgrade your random bonuses that fall from blocks throughout the game. These bonuses are crucial to beating some of the tougher levels, as well as making it far in the arcade mode.

A few examples of these bonuses are things like a wider slider for a short while, extra balls, a protective barrier behind you, and various other helpful buffs. On the opposite end of the spectrum, you have to deal with falling debuffs, which can shrink your slider or reverse your movement for a little bit. It’s really easy to tell apart the buffs from the debuffs, as the good ones are green and the bad ones are red; trouble is found when your ball is going to cross your slider line at the same point as a debuff, and you’re forced to take it. 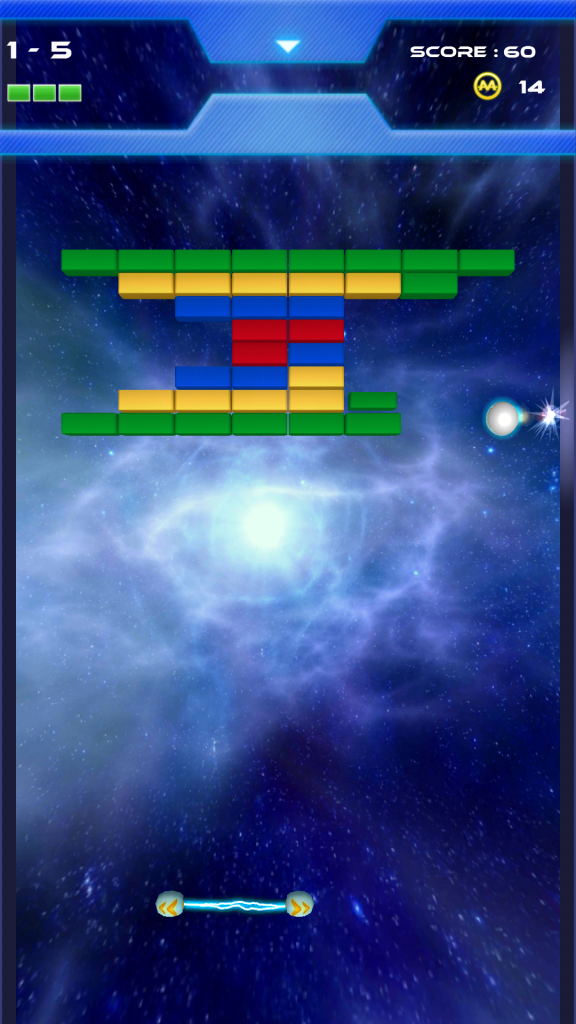 You can try to plan out the angle of the ball as it hits your slider, which is used to aim where the ball goes, and it works really well if you can get behind the blocks and let your ball do a bunch of damage before coming back down. As you progress through the levels, the bricks become tougher to break, meaning you’ll have to hit them multiple times before they actually break — you can tell how many hits are required by the color of the brick. Overall the Gameplay is decent, but unfortunately stays the same the majority of the time you’ll spend playing the game, and gets pretty stale way too fast

With this genre, you need to come up with some unique spin that makes your game different from the rest, and unfortunately Smash doesn’t really have a whole lot to offer in the Innovation department. Pretty much everything you’ll find in this game has been done a hundred times before, including all the buffs and debuffs. The upgrade system is a nice try to change things up, but since you can only upgrade the random buffs, it doesn’t feel all that rewarding.

Since Smash isn’t all that visually stimulating, and the Gameplay doesn’t shine, it’s a shame that there’s not really anything innovative about it either. I’d love to see a few more buffs that aren’t the same ones I see in every other game, and maybe some interactive levels — almost like a pinball machine layout. Just a couple ideas, not saying their the best, but I haven’t seen anything new in this genre for a long time.

Despite a Gameplay that gets old relatively fast, Smash is slightly more appealing to pick up and play every few days than most games. Even if you get bored after a little bit, the novelty comes back after a few days, especially with the arcade mode. Honestly, the upgrade system really doesn’t do much for the replay value of Smash — like I said before, you only get to upgrade buffs that occur randomly, so it could be several minutes before you even get to experience your upgrade. 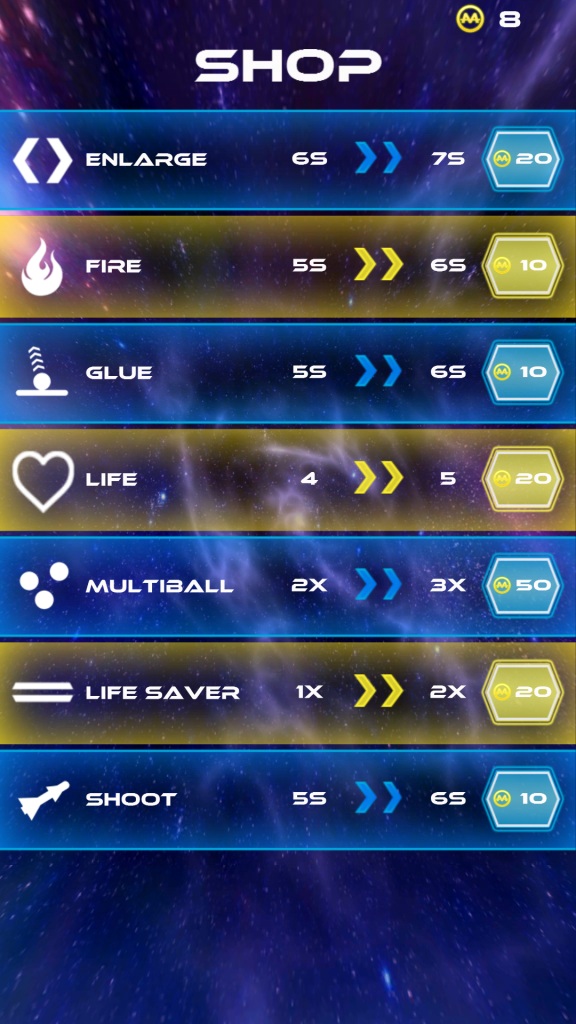 There are a lot of levels to play through in the campaign mode as well, so if you really wanted to play through the entire game, you’ve got several hours of entertainment right there.

Even though I gave this game such a low score, I’ll likely keep it on my phone for a while, simply because I really do enjoy the endless arcade mode — but I probably won’t even bother upgrading my buffs or playing through all of the game’s levels (or any more of them for that matter). As much as I wanted to really like this game, I just can’t get past the fact I’ve played it in a hundred different variations before on different platforms. Hopefully, there will eventually be a brick breaker game that is able to wow me, but it unfortunately was not Smash.

Click here to check out Smash on the Google Play Store!

Have you played Smash before, and if so, what did you think of it? Do you agree that there’s no innovation to the brick breaker genre, or do you think Smash is smashing? Let us know in the comments section below.