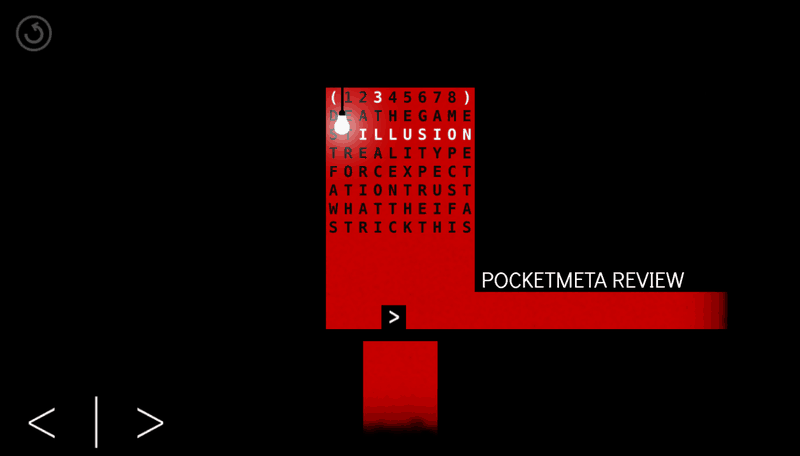 Sometimes You Die is an oddball that landed on iOS last year, making lots of reviewers ecstatic back then. The game crossed the great divide to Android a few weeks ago, so we got our hands on this little hedgehog. If you appreciate thoughtful puzzles with a philosophical underlying, go get it – it’s $2 only, and for a chic game as this it’s an insta-buy. If you are still on the fence, you might as well read through this review, although honestly, I don’t know if it’s going to help you. Describing Sometimes You Die without spoilers is like trying to explain what the Sixth Feeling was about without disclosing Bruce Willis was dead all along.

In addition, whenever ambiguity is at play, we all run the risk of seeing our own reflection in Malevich’s Black Square – and different opinions are unavoidable. Sometimes, playing this game does remind me looking at the titular Black Square – may be something, may be nothing. Or… is the author just mocking me? More yes than no.

In terms of the gameplay and mechanics, Sometimes You Die is a very clever puzzle – easy at times, but also frustrating. Your task is to get a black cube from the entrance to the exit. At this point, the game sarcastically points out you assume to know the rules the moment you start. All the remark in the game are made through audio-visual means – the writings on the wall, lit by lamps, and the narration somewhere in the background. It does draw your attention as you solve the puzzles.

Here is the catch. The rooms in Sometimes You Die are quite simplistic, but contain spikes in them. Thus, you either have to avoid them to get to the exit, or die.

The game does not end when you die. As your breathless cube corpse remains where you left it, your hero respawns and you can try again, but with the corpse lying on the field. As a result, you can build a pile of corpses to help you make a structure and use it to get to the next level. At this point, the game asks you how low the fun levels should be to not call it a game anymore. It does seem like sarcasm – after all, if it weren’t a black cube, but a character with the features of a living being, we’d feel the stings of guilt, wouldn’t we? Think about This War of Mine – it’s exactly what I was talking about, to what extent it is morally acceptable to play with the serious things? Either way, Sometimes You Die makes you ponder on these little existential crisis-inducing things, but it does not overwhelm you in them. In fact, it’s very easy to just focus on the puzzles and mechanics and beat the levels one by one without worrying yourself so.

When all is set and done, you aim is to build a contraption out of your own corpses to get through the maze and to the exit. Take it or leave it. Oh, and you can’t move the corpses, so you have to be very careful about where you die, too. You can have unlimited number of corpses, or you can hit a Re-do button to clear the area when you know a corpse is in your way.

By the way, you don’t have a grid of levels you’ve passed and the ones to cover – it’s a continuity of rooms, and while you can re-do the last one, you can’t just go back to the previous one. To start over the entire game, you have to either finish it, or wipe the app data.

There is an on screen left and right button at the bottom left corner while the tap and tap and hold gesture makes your cube jump. And here is the part I still struggle to wrap my head around – sometimes the cube jumps high, other times quite meh, and it frustrates me. On the flip side, it’s a part of the challenge and considering some initial rooms are easy, the frustration of the subsequent levels compensates for that.

I have been reading through some tips and tricks, and some users suggest that when you completely finish the game for the first time, it grants you with a Pause button, and the next time you go through it, you will be able to jump and pause, which would enable you to perform a double jump. I haven’t gotten that far, yet, but if I do I will let you know.

Speaking of the surprises, the game does suggest some Easter eggs hidden in its basket. For one, the description as well as some long-time players suggest there is a hidden room you can unlock at the final stages, as well as that mysterious double jump mechanic. In addition, some of the later levels play a nasty trick on you – just when you think you have figured it out, they change the controls and the mechanics, making the walk-through worth a sweat, indeed.

I would sing in tune with the description – if you think this game is too easy, you haven’t played it all, yet. And it’s the kind of game you will not only play once till the end, but many times. Provided, there must be some hidden tricks and Easter eggs, it’s an intriguing experience. Now I have just finally found that word – Sometimes You Die is not just addicting, it’s intriguing. And frustrating, if you get easily annoyed at the levels that require multiple re-tries.

Depressing is the least I can say about Sometimes You Die. Its music is intoxicating, and made me think of my younger years when I tortured my parents with long sessions of Radiohead and Smashing Pumpkins – got to appreciate their patience. The black, white and gray palette is highly polished, atmospheric and grim, as much as a minimalist design can be ingenious.

If you ever played Odd Bot Out, here is a parallel – if Odd Bot Out were the ultimately kind and wise manifestation of the AI, Sometimes You Die would be its satanic, sadomasochist antagonist. Both in terms of the esthetics and the gameplay, as well as the underlying meaning. In the end, I guess it means the game is brilliant.

At the end of the game, it offers you to purchase a new level for $9.999 – and two options. See it for yourself and tell me the developer is not being sarcastic.

Sometimes You Die is a puzzle, accessible at the beginning, more challenging further on, containing secrets, Easter eggs and a ton of brain-eating worms, if you take in its subtle messages from the writings on the walls and the digital voice mumbling something in the background. Let the grim art and depressing music soak your nervous tissue; let the hardest challenges and the change of rules aggravate you; unleash the paranoid in you and see if you can find those hidden difficult levels the game teases you with. Describing its puzzle mechanics does not do this game justice, so just trust your hunch – if freeing your mind is an option, and you can let go of your expectations, you will most likely find yourself enjoying every bit of Sometimes You Die. If the philosophical mumbo-jumbo bores you, ignore it and enjoy the tricky puzzler. I’m all in with this one.