Anyone who sets out to make the next best mobile Action RPG, definitely has their work cut out for them. With games like Eternity Warriors 3, Dungeon Hunter 4, and Dark Avenger to compete with, you really need to come up with groundbreaking ideas for the genre. Not that these games have really set a new tone for the genre themselves, but they’ve already mastered the art of a traditional Action RPG for mobile devices — and most of the newer ones are simply repeats of what we already have.

I do have to say, some of the visuals in SoulCraft 2 were actually pretty neat. Fighting demon spawns in the middle of a highway that is partially engulfed by lava, with flipped over police cars on the side of the road, was a great set-up as far as the scenery goes. Not all of the levels were great, and a couple just felt like the same chunk of scenery throughout the entire level. 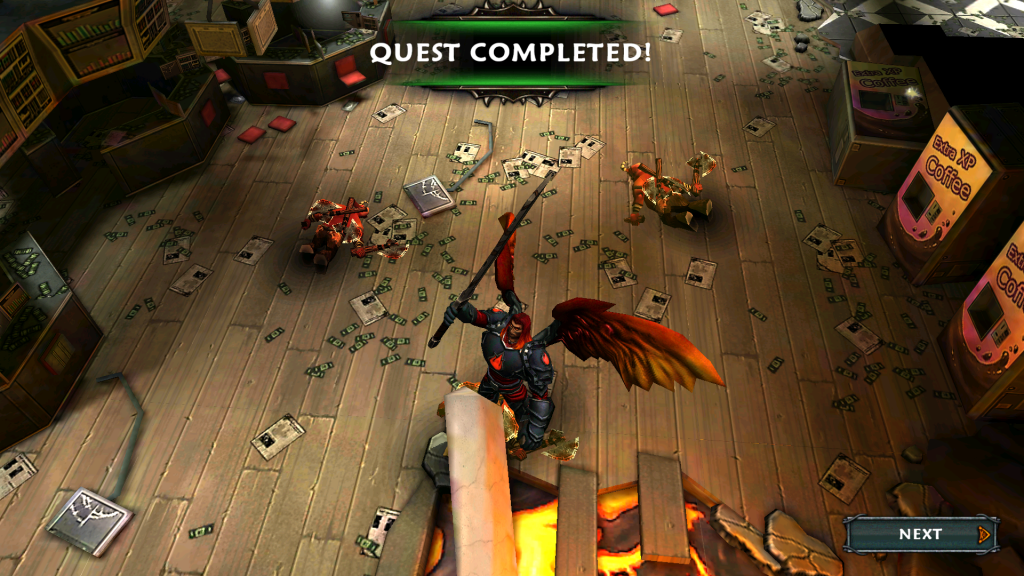 The character and monster models looked good for the most part, although I felt there was a lack of variety regarding the mobs you fight. Also, the character skill animations look great for some of the characters, but others are a bit lacking. Even though SoulCraft 2 is a bit hit or miss aesthetically, the overall graphics quality was pretty high. With some more toning and polishing, it could look even better, and they don’t need to necessarily improve the quality of the graphics to do this.

With 8 unique characters to choose from, each with their own set of abilities, definitely sounds like a lot. However once you realize that you’re pretty much stuck with those abilities for a long time, and you can’t even improve/tweak them, really puts a damper on things. Still, whenever you find yourself bored, you can always switch up characters for a slight change of pace — even though the overall combat feel stays pretty stagnant throughout.

I found myself simply waiting to use my three abilities in succession as the Phoenix class; buff, lay down fire, turn into fire, run away and wait for cool-downs so I can repeat the process. There was a standard ranged attack I could use, but it seems like you’ll take damage if you ever stop to use that ability. A lot of times, you would seem to just take damage that was completely unavoidable, and it would be quite frequent. The solution was to kill the enemies as quickly as possible, but it ended up making everything feel like a gear check rather than a skill based Action RPG. 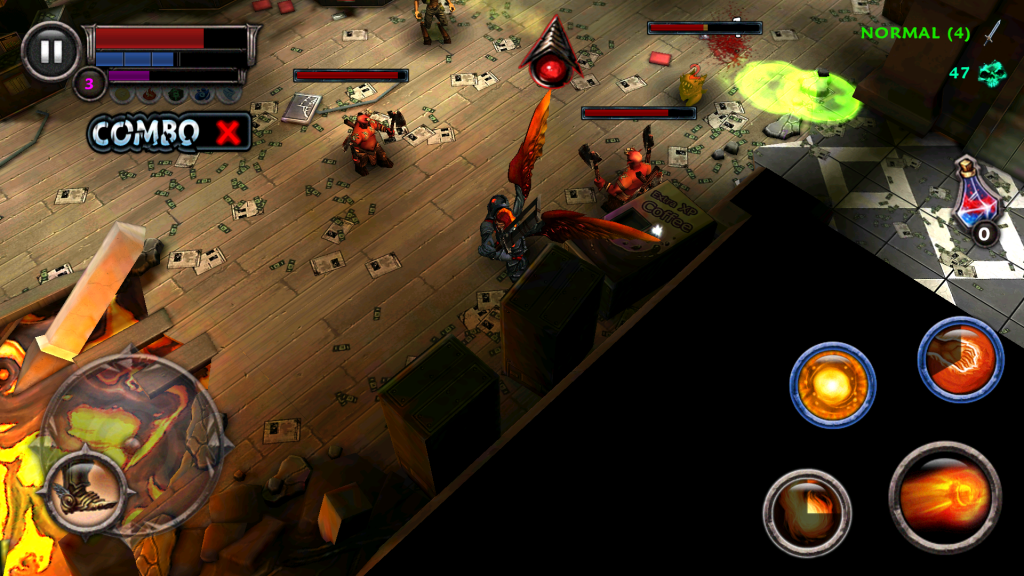 For what its worth, I did have a couple of intense moments, but they were mostly short lived. Even the multi-player was pretty lifeless, since each person usually just uses cool-downs and runs until they’re back up. They do try to mix things up with multiple game modes, like the soul hunter, multiplayer, and regular missions — but these all end up feeling almost identical to each other.

One of my biggest issues with this game was how choppy the movement was. This isn’t a graphical issue, it was an issue with the controls and how the game reacted to your movements. There were other issues with the controls as well, such as the auto-targeting which was pretty much useless, and ended up causing more problems than it did help me target the right enemies. I assume this can be disabled, but that doesn’t discount that I almost consider it a broken feature. 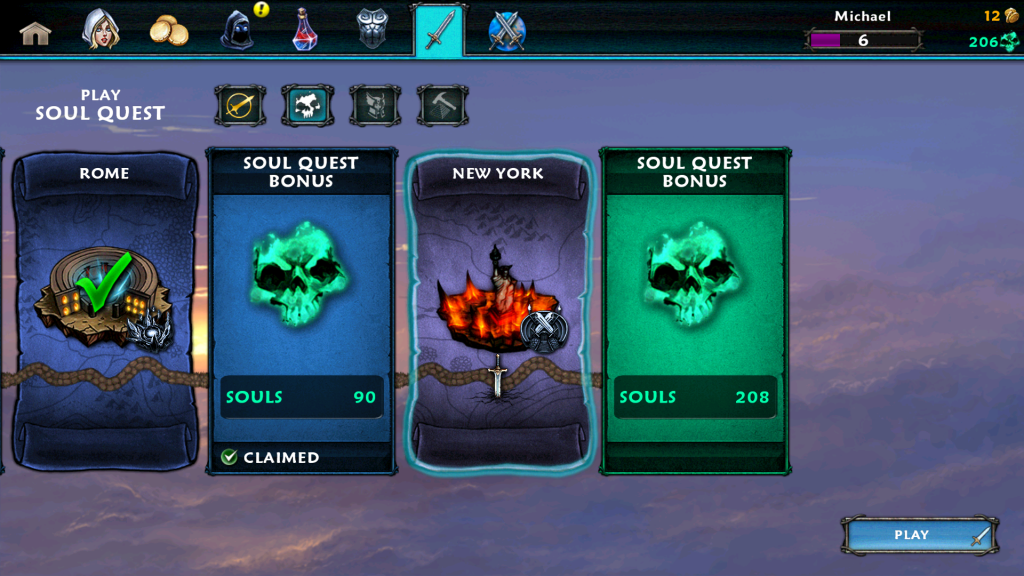 The menu interface was not perfect either, with a lot of small icons with no real direction or definition. There are a couple of quick, basic tutorials which basically say “tap on this” but don’t really tell you what it is, or explain why it is there to imprint it in your memory. Shopping for items wasn’t too bad, even though you rarely have enough currency to do this unless you’re buying gold. Once you eventually get accustomed to the menu, it’s not too bad, since it is at least organized well.

If there is one thing that is crucial to having a fantastic Action RPG, it’s whether or not that game can get players hooked — SoulCraft 2, is going to have a hard time with this one. The stale gameplay, combined with bulky and annoying controls, are enough to wear you down from this game. However, there’s some more aspects that I haven’t even touched on yet which really made me set this game down.

The major emphasis on in-app purchases is ridiculous with SoulCraft 2, and if you try to play for free, you’re just going to feel extremely limited. Various items in the shop are either “locked” until you buy a gold membership (but still well displayed), or they can be purchased with gold only. I get that developers need to make their money, but there is a line between balanced IAPs, and IAP overload. Getting the gold membership is the only real upside to this, as it gives you quite a bit more to do, without having to spend money on actual currency. 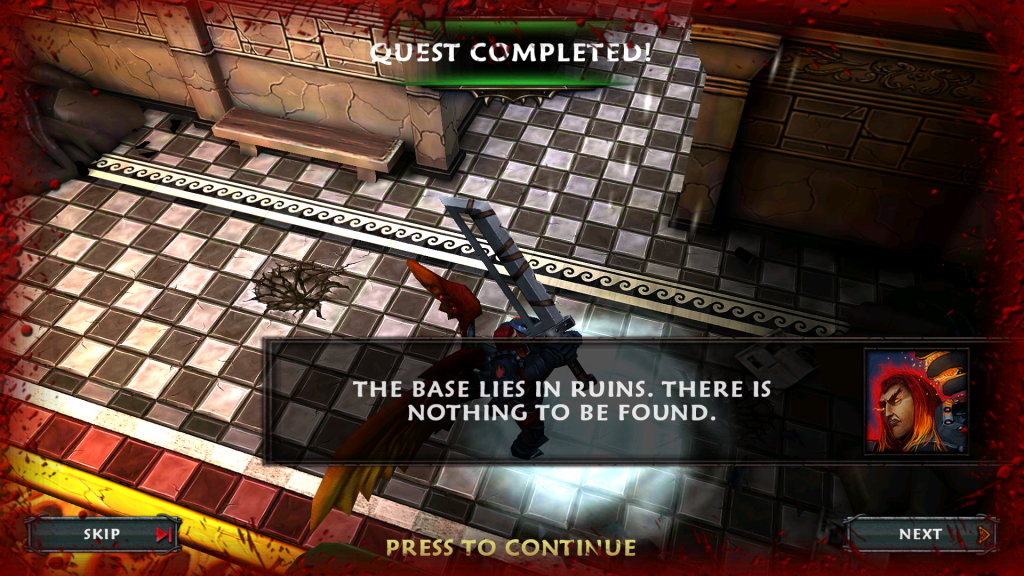 Having a few classes to play helps a bit, but it’s still not a game that you will get too many urges to play — especially when there are a handful of much better Action RPGs on the mobile market.

SoulCraft 2, much like it’s predecessor, doesn’t do anything to break the mold that is in place.  Other than a handful of cool scenery elements, the things that stand out about this game are usually negative. There are a couple of other minor redeeming qualities, but overall the experience felt pretty standard, if not sub-par.

Click here to check out SoulCraft 2 on the Google Play Store!

Leave us a comment below with your thoughts about this review, and about the game as well!