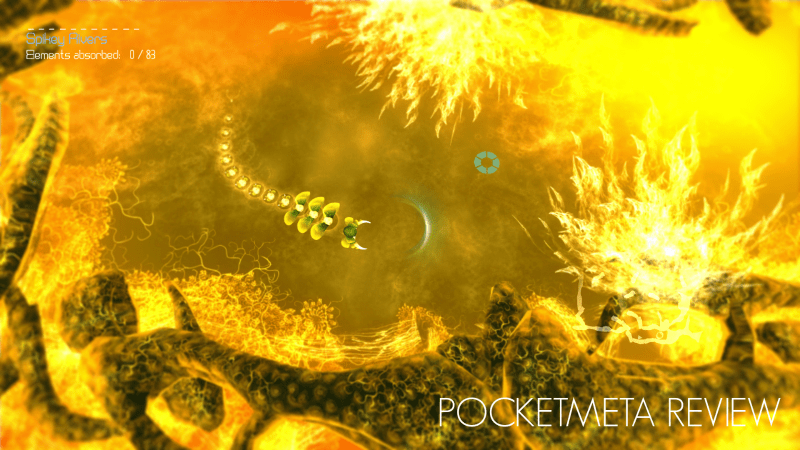 We know and love Forever Entertainment for their Sparkle series, Merchants of Kaidan, and my personal favorite Frederick Evil Strikes Back series of musical games. If you are like me, and enjoyed the previous Sparkles, or the games that fall in the same category of Zen-like meditative experiences with grand visuals and relaxing gameplay, think Osmos HD, you are probably considering whether $3 is a reasonable price for the new release. I have spent several days growing my sparkle and here is my review. Read on.

In terms of gameplay and mechanics, it’s a traditional grow your beast by eating stuff that floats around and escaping or fighting the predators. I say, if growing a cute little critter is a problem, grow a big, fat and nasty one. This type of game has to be relaxing and meditative, like watching fish in the aquarium. Did Sparkle 3 Genesis meet this criteria? Yes and no. 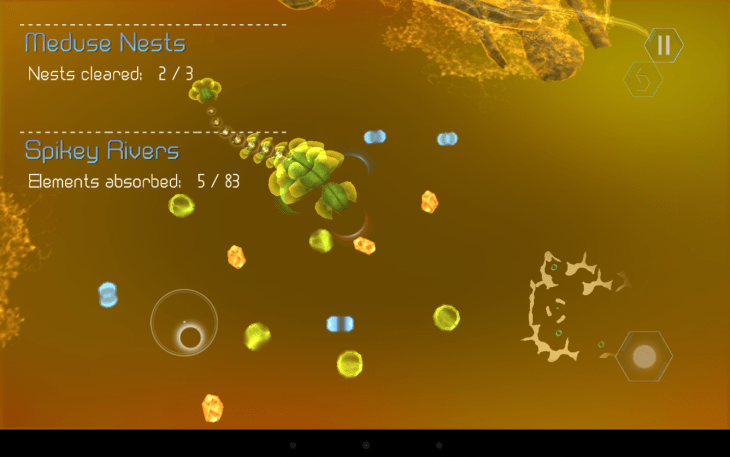 First things first, the Tutorial is more than confusing. I loaded and force closed the game a dozen times until I found a video on YouTube that had the same visuals my Tutorial did. That’s when it dawned on me it’s not the problem of the graphics not loading – it’s just the normal looks of the introductory level. So, there you have it. The tutorial looks as if nothing loaded but a transparent skeleton of a worm and the big blue void.

The same tutorial shows you hot to swim, collect food particles and use the water vortex to jump higher or lower. The first time I tried, the little glowing beacons around my sparkle’s head that signal where the food is, did not load up. Neither did the food particles. Reloading fixed the issue, but still I felt nirvana was as far as it could ever be.

The next problem with tutorial is a confusing mini-map, which shows nothing. Yet, it is still quite easy to pass and learn the basics when everything loads up. 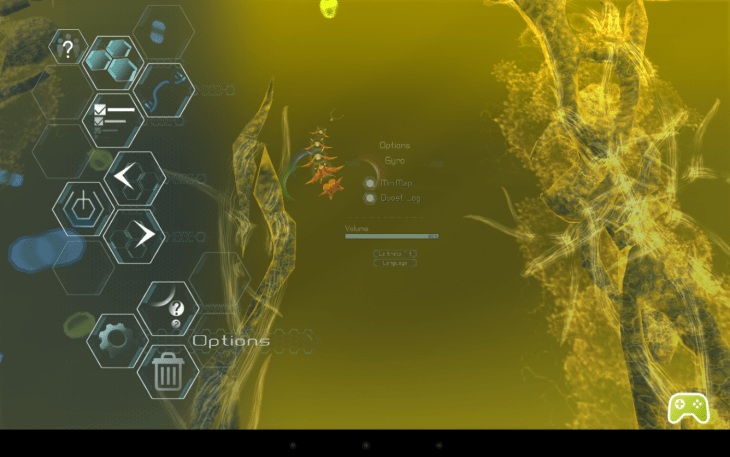 I spent the next couple of hours growing my sparkle into an adult, beautiful something that looked like a shrimp mixed with a lighting bug. Truth be told, I get a little uncomfortable around bugs… and fish, and jellyfish, and algae. However, the game did not provoke any nauseating effects during the gameplay. It’s always a good sign the game is immersive enough to consume a few hours straight, and Sparkle 3 does the job.

You swim, you eat, you accomplish missions. But first things first.

There is a creator who talks to you from time to time. There are shiny stars you can find in the void, and if you catch them he usually gives you a side-quest to go along your main mission. The latter are quite straightforward – like finding and consuming someone else’s food supply, or exterminating three jellyfish nests, or protecting an egg nest from parasites, or escorting three critters carrying eggs to safety.

The missions aren’t fast to accomplish due to the minuscule size of your sparkle and the big void around you. You do have a mini-map, but it does not show you where the nests or the food supplies are. It just shows you the approximate limits of your area and the locations of the vortexes you can use to jump up or down. You have to figure out the rest by swimming and exploring. 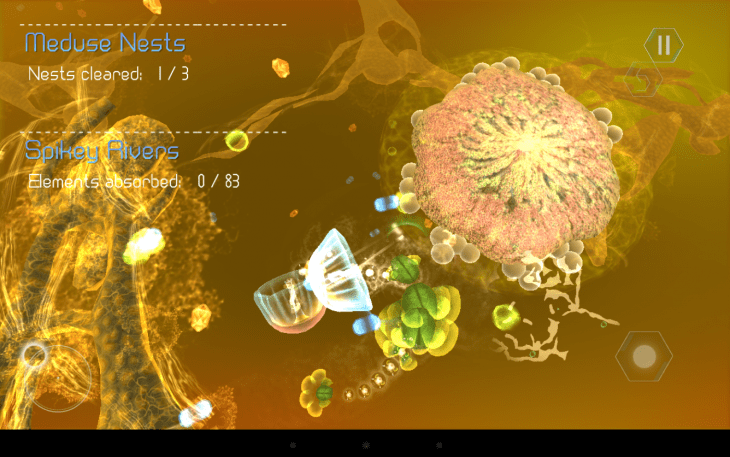 Feeding is the main activity you would be doing here because you need to collect them particles to be able to evolve your critter. There are three amino acids you can upgrade to grow your sparkle, and each corresponds to particular qualities, like attacking, defending or self-healing and immunity and the like. Depending on the first one you choose, you will have a special ability that gets activated by double-tapping on screen. However, that special skill does not affect the gameplay much. 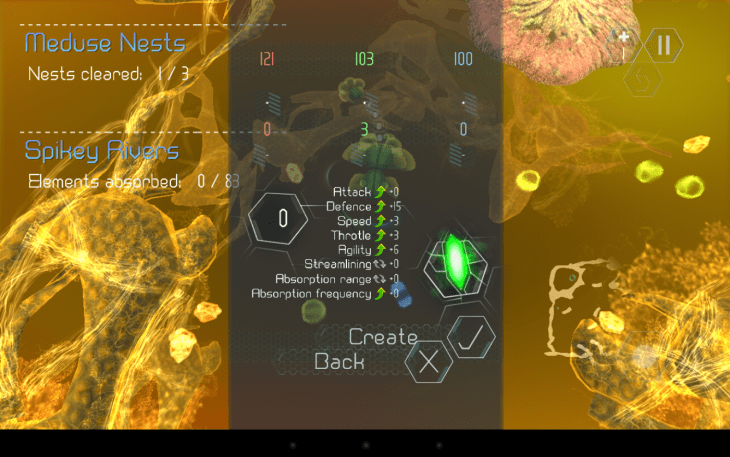 What does affect the gameplay a lot is the pause in between the swallowing acts your sparkle can perform. Whenever you swim into a pool of food particles, it grabs the first one and then just passes by the rest. There is like 1 second delay until it can eat the next one. Needless to say it’s highly irritating because you usually are in a different position within that second and you need to get back to eat the food. I thought maybe when I grow up and get evolved enough, my critter can eat faster, but no – the delay seems to be consistent. In addition, you have to consume a whole lot of these glowing things to be able to evolve some 3 points up. Eating the jellyfish nest does give you a boost, but it’s also a time-consuming mission, so the overall progress is very slow.

Inevitably, we have come to the controls issue. 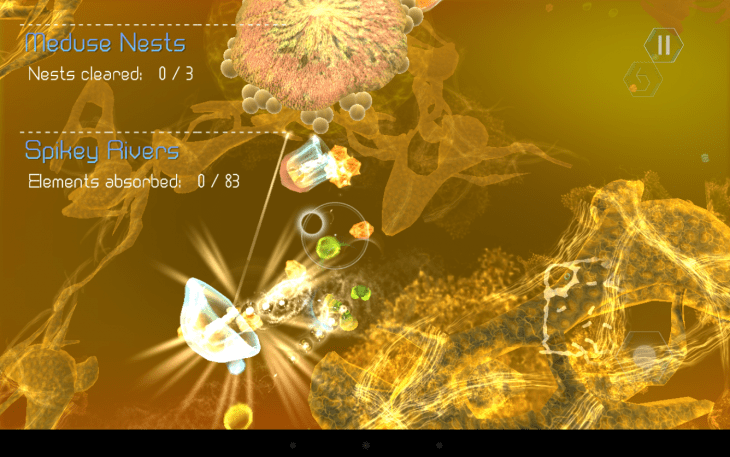 The game offers three control schemes – gyro, onscreen touch and joystick. Unlike the previous Sparkle games in the series, this one does not support the external controllers for some inexplicable reason, which is a downgrade.

Gyro is a pain to use, touchscreen is irritating, the virtual joystick is the only more or less usable option. The issue with the movement here is your critter moves in circle-like patterns. It can’t just make a 45 degree or 90 degree turn – it has to swim around itself, which is confusing in the least, even though it might seem realistic for an ocean inhabitant.

Finally, one moment the controls work fine and the next moment they lag beyond tolerance. The taps do not register and your previous command freezes for a few seconds, so the sparkle swims away from its food or target until your next order gets registered. Goodbye nirvana. 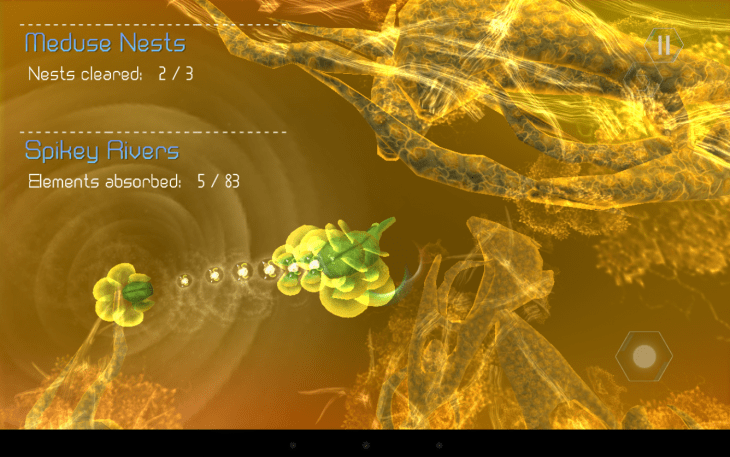 So that we finish off the list of issues, let me dwell on performance now. I expect a buttery smooth auto-save from games like this that suggest long gameplay sessions and hard-earned progress. Little did I expect to come back to my critter the next day to find myself thrown back to the Tutorial level. That hurt.

Mini-map is another confusing thing simply because its background is transparent and when you are in a particularly brightly colored environment, the map just blends with it, and you struggle to make out where you are. In this game, you are supposed to get lost quite often, and the map does not help you much. It needs to have a clear background and it needs to get expanded on demand.

On the flip side, being able to dive and resurface within the same area is a neat mechanic, so each mission has several maps and layers. 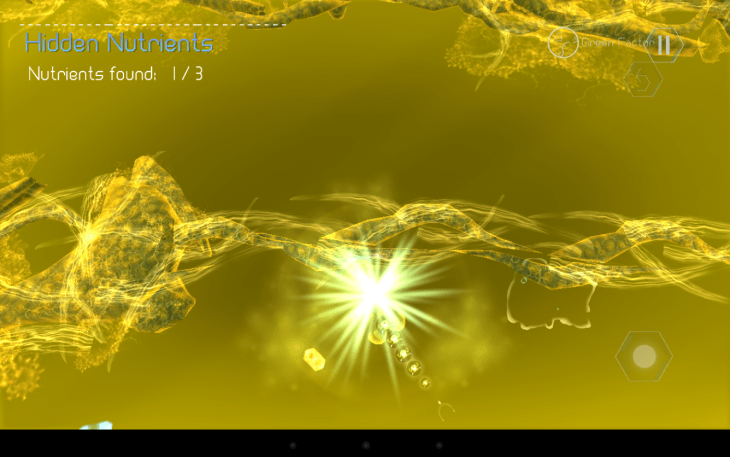 Tutorial aside, Sparkle 3 Genesis looks fabulous and each screen is a masterpiece filled with glowing colors, underwater specimen and neon algae. It’s a pleasure to marvel, and it’s a shame the needlessly time-consuming missions make the game a bad favor. In the end, you get bored with the royal visuals just because it takes too much time to consume enough food to grow, or complete a mission getting lost in the area.

The soundtrack is amazing and atmospheric, and blends well with the dazzling visuals. 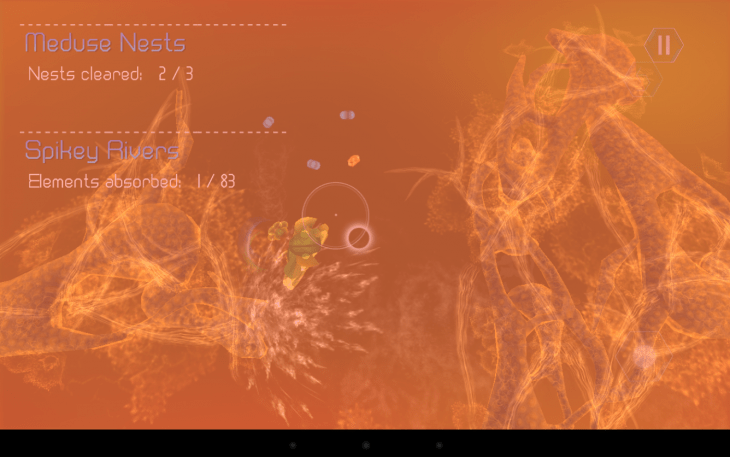 That said, you spend so much time in each area you might get bored with its great looks. Having your progress mercilessly lost does not encourage dedication either. The control lag further amplifies the frustration.

Don’t get me wrong – I love the gameplay and the visuals, even with all the time-consuming swimming around; it’s just rough around the edges and loses its momentum in these small, yet affecting issues.

However, on those occasions when the game runs smooth and does not lose your progress, you can have a wonderful time with it, enjoying all the benefits of a premium game. 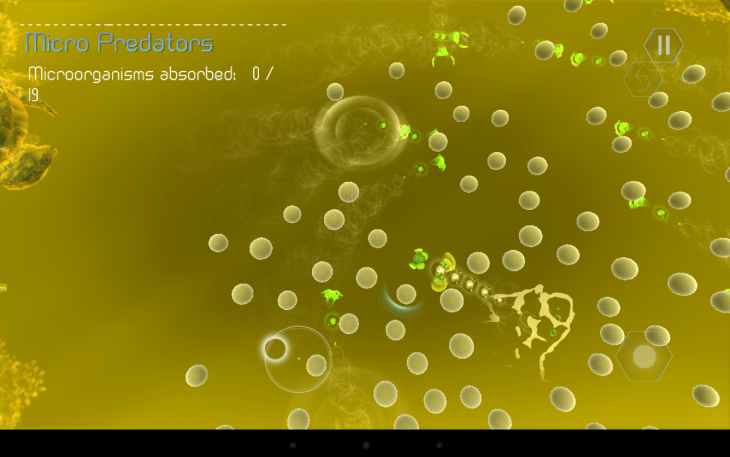 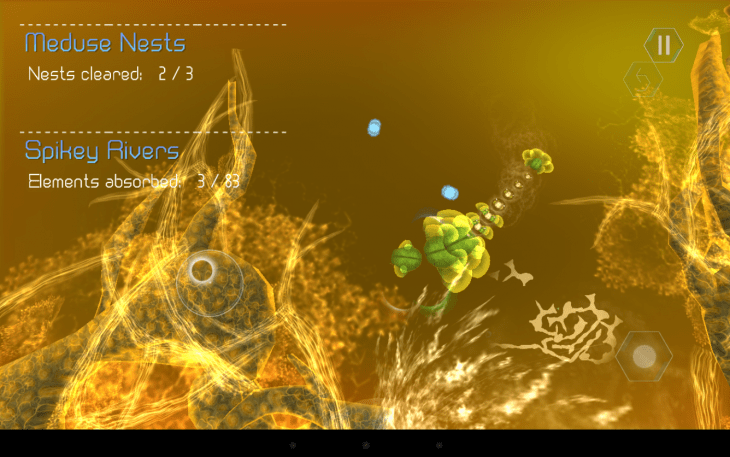 Sparkle 3 Genesis is a great release in the series and adds the necessary missions and quests to the traditional mechanic of growing the fattest shrimp in the neighborhood. It’s fun to poke and eat the jellyfish; it’s a delight to see your critter grow into something weird yet beautiful. However, this game is hindered by a slew of lags and counter-intuitive decisions (mini-map) that make it a tough love. I certainly recommend this game to the fans of the series and everyone fond of this type of game, but I also hope the developers address some of the performance issues.