There are many Spiderman games, and Spider-man Unlimited by Gameloft could be yet another in the series, but it’s not. It is THE game that nails that thin fabric of a story-driven adventure gently wrapped into an endless runner genre. It is addictive, fun, rich, deep and awesome, yet controversial and plagued by bugs that, if or when addressed, will let the game shine and take the place on the Olympus of Spider-man games for mobile platforms.

Spider-man Unlimited reminds me of an onion, with layers of content tightly wrapped around each other. There is the story laid out in the comic style, fantastically drawn and well-written (for kids, I mean) and some nice voice-over scenes once in a while. All that story goodness is spiced with a healthy doze of humor, so I did not feel like tapping on that Skip button at all.

At its core, though, Gameloft’s Spider-man Unlimited is an endless runner, with loot grinding and occasional melee fights. The first tiny disappointment I had was the physics – Spider-man must swing, mustn’t he? All Spider-man spectacular action must be airborne, but in this game, 95% of the time you run. I can live with that because the game is still awesome.

As your Spidey runs, he collects vial and some other perks you can later spend on in-game stuff, which in this case is so numerous, there is no point enumerating. From Spider-men from other dimensions to portals and suits, there is plenty of content for you to muster, unlock, or buy.

The second, and major, disappointment is the annoying bug in the controls system. You control your running Spidey through a series of simple, yet non-obvious gestures you have to memorize. Swiping left and right is crystal clear, but swiping up and down can let Spidey dodge an obstacle, or fight the villain. Some villains can be defeated by attacking through swipe-up, others through swipe-down, and this is not the most handy system for fast-paced games when you have to act without thinking. You swing by long-pressing anywhere on the screen, that is when you get a chance to swing.

The bug I mention is the controls’ unresponsiveness. Sometimes, it takes two or three swipes to have Spidey move the direction I need, but that second is enough to have him bump into something nasty and die. The bug is persistent throughout the entire gameplay, and nothing helps. In fact, users report the bug on both iOS and Android devices, so this is not the problem with my device. As a result, 85% of my deaths come from a swipe not getting registered. 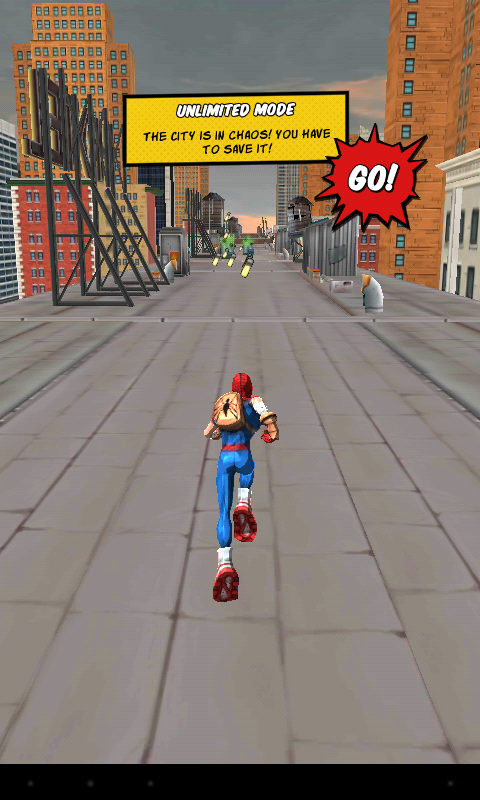 I love everything in Spider-man Unlimited’s visual department from the comic-book style to the action-packed running animations, or the cut-scenes with awesome hand-drawn characters and other thematic items depicted in great detail.

There is, though, another glitch – a tiny lag in animations when Spidey runs, which sometimes is all it takes to die.

The game has a complex, or so it seems, system of leveling up, and sometimes, when I fail on a mission, I am sent in a loop to the first stage in the story, which is somewhat confusing. There are many stages, but each is basically about running and trying to grind for the game’s most precious currency Iso 8.

Grinding it is, for the iso 8 is too hard to earn. Multiply that by the fact that an occasional system glitch can null your Iso 8 count, or fail to deliver the hard-earned currency, and the grinding suddenly feels very frustrating and unrewarding experience. IAP transactions have been reported to come with glitches, too, when parts of purchased content were not delivered.

This is not to mention the IAPs range from $0.99 to $99.99, so don’t leave your kids unattended playing with Spidey. Some IAPs are unreasonably expensive – 1 premium spidey portal costs 25 Iso, yet 10 Iso cost $2. 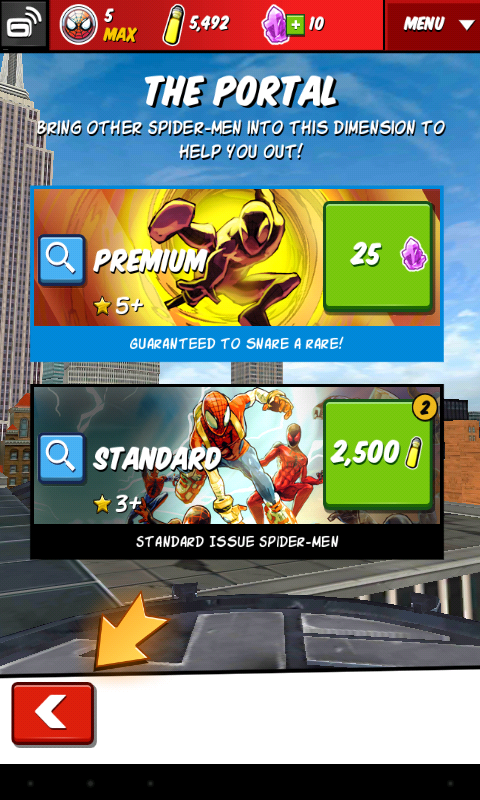 The next thing about money here is that, provided by the given that you die too often, and your energy exhausts, you only get 1 energy refilled every ten minutes, which is drastic and way too stingy for, again, a very fast game with short play rounds and unfair death toll. 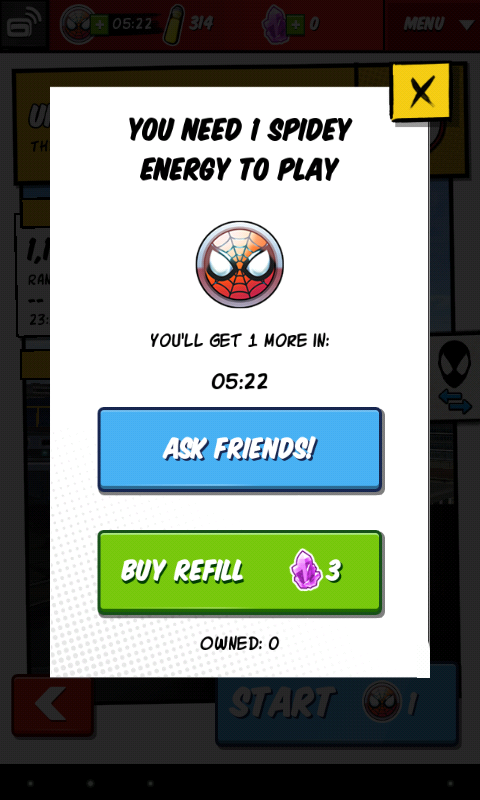 All that load of bugs contributes to the nagging assumption that’s been with me since I outlined the Cons – the game’s ability to keep the players coming back after Level 10 is pretty poor. In fact, I will drop out even sooner because it can get very frustrating.

The game’s appeal is enough to keep it until the next update without un-installing, and hopefully Gameloft addresses some of these issues, which the developers must do because Spider-man Unlimited has an immense potential to be one of the best runners. My hope is they can see how a short-term stingy thinking can kill a potentially awesome game.

Spider-man Unlimited is, or rather can be, one of the best and in-depth endless runners out there, with tons of Spider-man content, a rich story, fun dialogues, nasty villains and impressive visuals. The game nails the essence of the Spider-man Unlimited comic book and transfers it to mobile platforms nearly seamlessly. However, the game is plagued by bugs that render it annoying, rather than enjoyable, for some players, so a quick update with bug fixes is more than welcome. It is necessary to let the game take its rightful place on the Pantheon of Android’s best endless runners, and the best Spider-man games. There is no point for players to buy via in-app purchases when most of the time Spider-man dies due to a glitch in controls. I hope the developers won’t let their short-term money goals get in the way of the game’s triumph.

Can I use an Apple Watch without an iPhone?

How to permanently delete text messages on your iPhone

How to Make TikTok Duet Videos