Among the handful of new iOS games released this week, there was one that I had been looking forward to for a while. Spooklands (also available on Android) is a very simple game that is chock full of intense, close quarters combat. I’ve said this a couple of times, but upon first glance the game reminded me a lot of Super Smash TV for the SNES. As it turns out, it’s not quite as similar as I had thought, but definitely reminiscent of the great arcade shooter.

It’s a fun little spray and pray game that pretty much anybody can enjoy, and it’s only a buck. There may not be much depth to Spooklands, but it can still keep you entertained for quite a while.

First of all, I love how smoothly this game runs (in my experience, on iPad 3). It’s the kind of game where responsiveness is a major necessity, and it delivers. Although each level is environmentally identical, the color scheme and textures get changed up — as well as the character you play as, and your primary weapon. Each level also has it’s own unique set of monsters you’ll need to deal with. The visuals in this game are all very well polished, everything from the power-up timers and HP icons, to the combat as a whole. 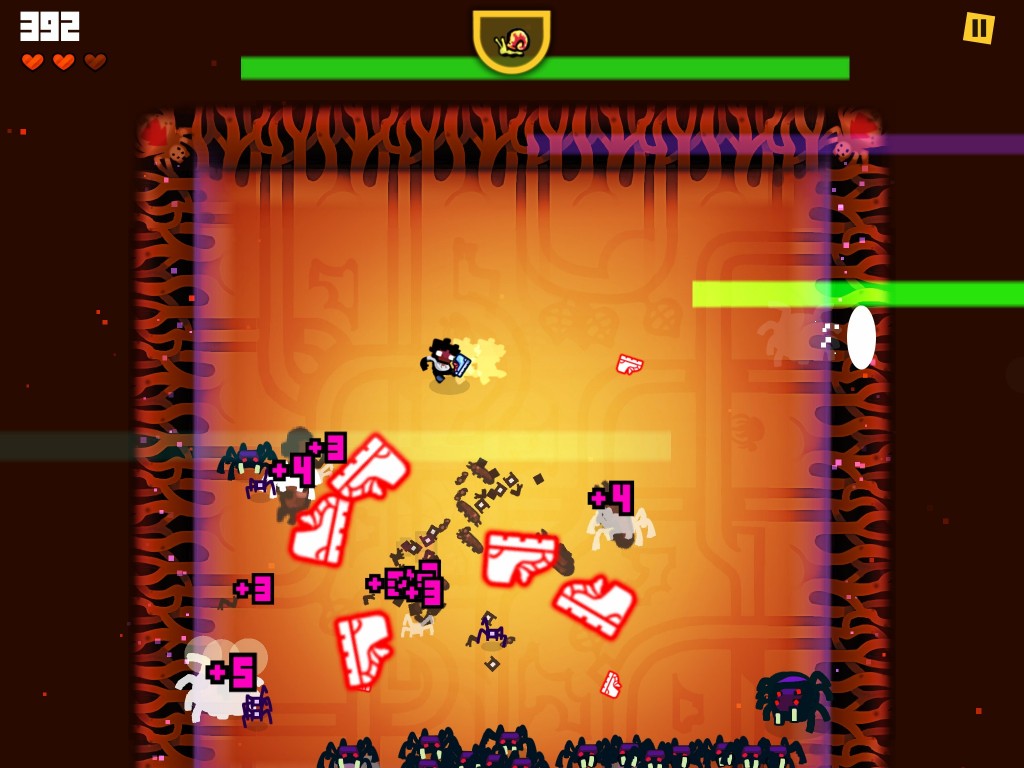 Still, the game is still missing that “Wow Factor” for me, at least visually. I would’ve liked to have seen a few rare monsters that just looked over the top, or something that I could stop and say “Now that looks cool” to. If there was one thing I’d nitpick about, it’s that the levels don’t fill the size of the screen so you end up with a lot of extra solid color space — and you also can’t see the top of the screen when you’re at the bottom, and vice versa. This may have been to accommodate certain gameplay mechanics, but to me it seems like a visual hiccup. Overall the graphics are great, but lacking the ‘extra mile’.

Spooklands is definitely an Arcade Shooter, there’s no campaign you can play through, or story mode to follow. Unfortunately, there’s no multi-player option, which would have been perfect for a game like this (maybe with some bigger maps to accommodate it). The mechanics are pretty much identical across each of the three levels, except the enemies are a bit different. Your goal isn’t to survive the level, it’s to see how high of a score you can get before you die. Several power-ups will appear in the middle of the screen randomly throughout the level. You’ll unlock these as you play the game more, but some examples of early ones are a slow-time, rapid fire, and multi-shot. 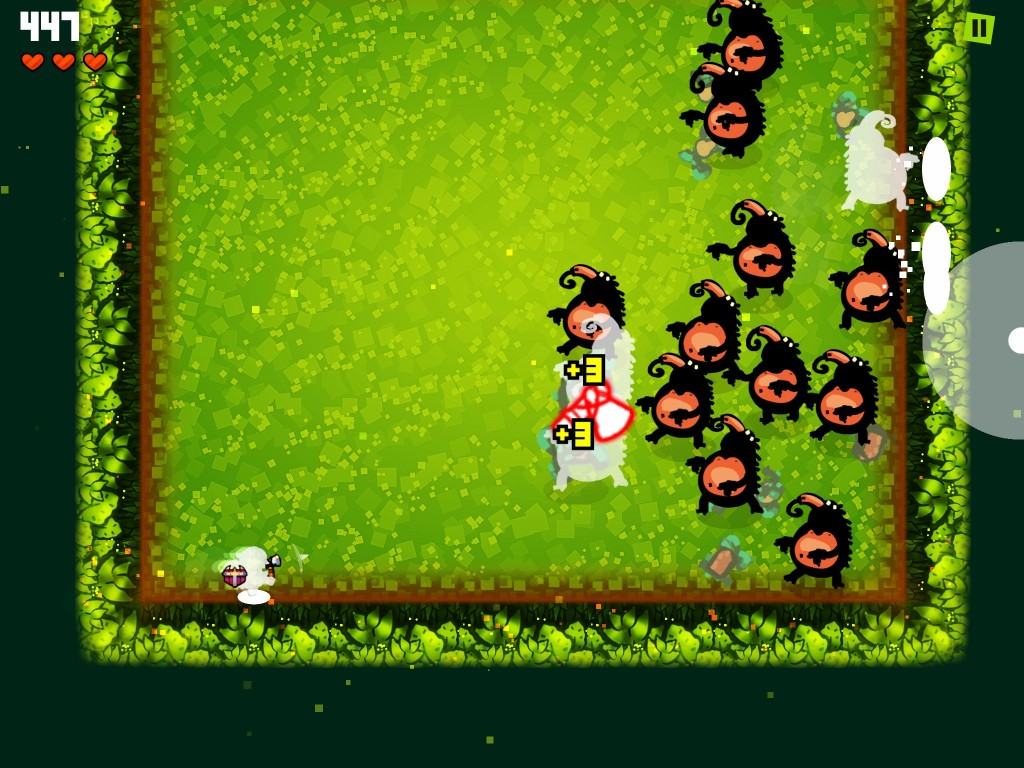 Enemies are spawning pretty much throughout the entire game, and the spawn locations are indicated by a small shadow on your screen. You get a couple of seconds to move away from the incoming enemy, but it gets pretty challenging trying avoid new enemies while taking out the old ones. The controls make this extra challenging, because Spooklands doesn’t use a joystick control set-up — instead, you tap in the direction you want to shoot, and get pushed backwards at the same time.

It did get a bit repetitive after a while, since the only real variable from one experience to the next was the power-ups you’d find. However, I can’t imagine ever getting too tired of this game, to the point where time away can’t replenish the fun factor.

There’s really only one menu interface in the game, since everything is contained with-in the main menu (with a few in-screen mini menus). You can access the leaderboards, unlocked power-ups, options, and any of the three levels — all from the first screen. Accessibility is huge in mobile games, and there were no issues for Spooklands in that category. I mentioned in the visuals how I liked the power-up timers and HP icons, and really all of the minor UI elements are very well done. 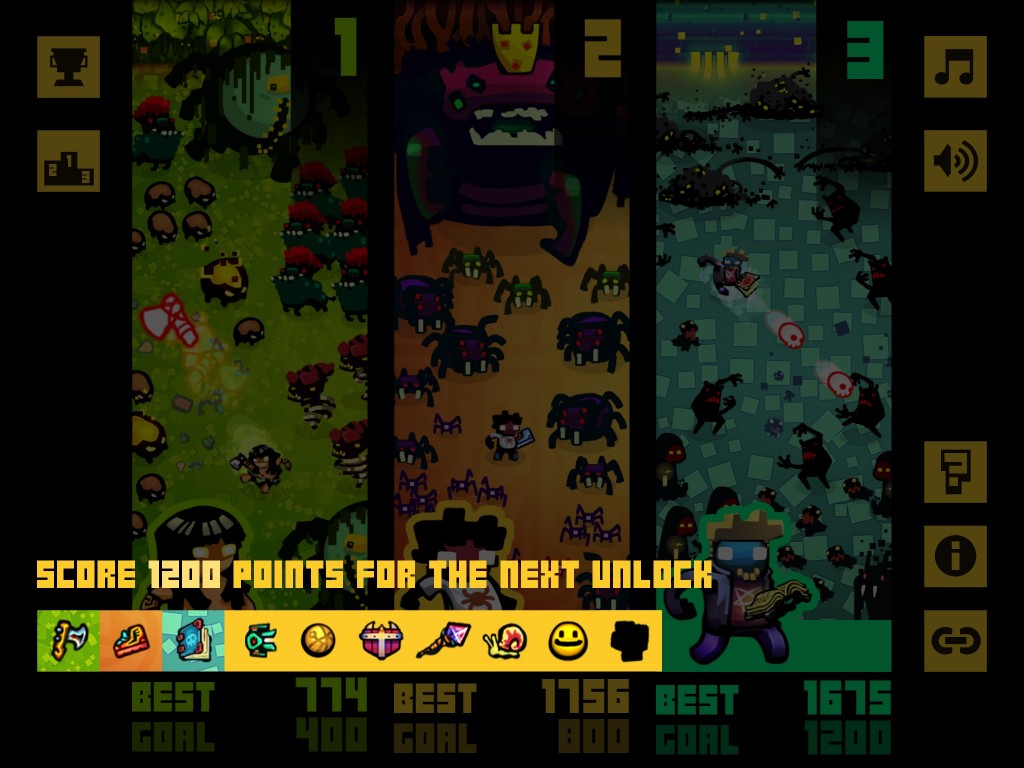 I did feel as though there should be more options for controls in the game. You only have the default controls, which are OK, but I could see some people preferring a joy-stick alternative. This doesn’t have to change the gameplay mechanics, as you could just pull the joystick in the direction you want to aim, and still be sent backwards with each shot. Not that it’s a huge issue, as the game is by no mean un-playable in it’s current state, but it can get annoying trying to drag your finger all over the screen — especially in an intense arcade shooter.

Competing for high scores is the biggest thing that will keep you coming back, and hopefully there isn’t an excessive amount of cheaters and bloated scores anytime soon. Along with that, you’ll look forward to unlocking new power ups every so often, but there isn’t much else. You’ll need to unlock level 2 and 3, but I was able to do this within 10 minutes of playing, so I won’t even count that. I like that it’s a very simply arcade shooter, with a very basic concept, but I feel as though a tad bit more depth would be a nice touch. 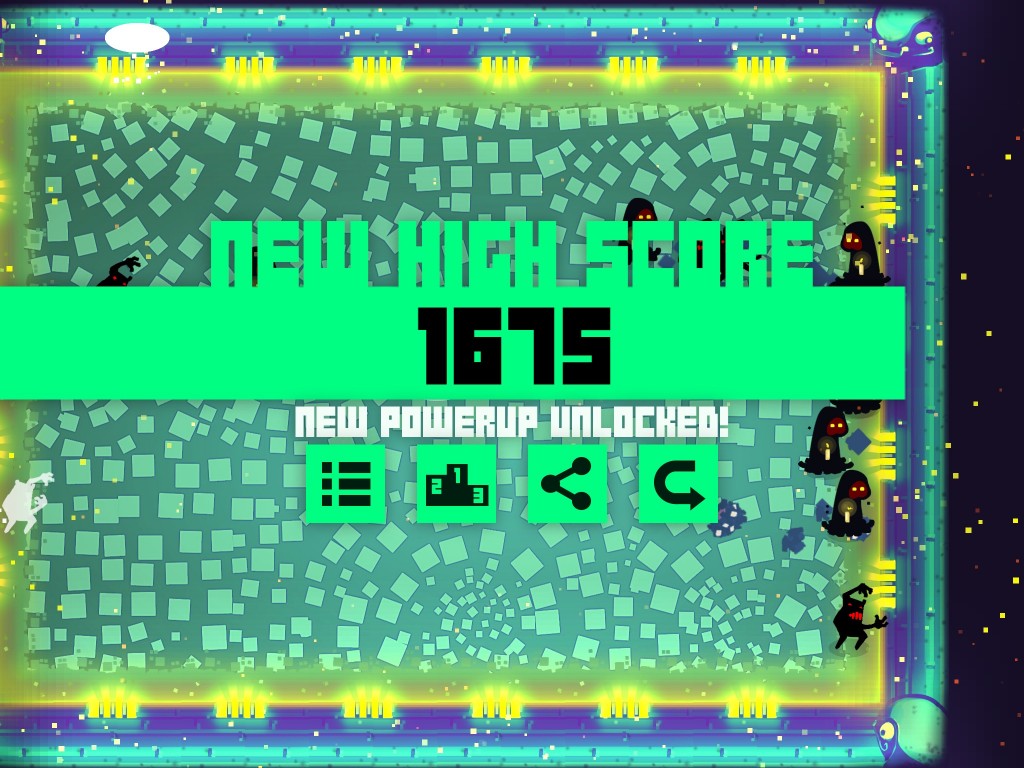 As much as I enjoy fighting off waves of enemies in a small arena, I still left feeling like the game hadn’t reached it’s maximum potential. Like I said before, multi-player would be a lot of fun with this game — not as a deathmatch, but co-op. If I were able to pair up with a friend or even a random person online, and compete for co-op high-scores on a special map (it’d have to be larger), that would add a whole new layer of this game to enjoy. Even though it is missing a few things, the gameplay is still fun enough to keep you invested for a while.

As you can tell from the scores, Spooklands is a great game. It doesn’t do anything to push the envelope, and it’s not going to WOW you, but it’s definitely worth the dollar. I don’t know what the developer’s intentions are for future updates, but I see a lot of potential with this game — especially for new maps and multi-player functionality.

Click here to check out Spooklands on the Apple App Store!

Click here to check out Spooklands on the Google Play Store!

Make sure you leave us a comment with your thoughts about this review, and the game itself!