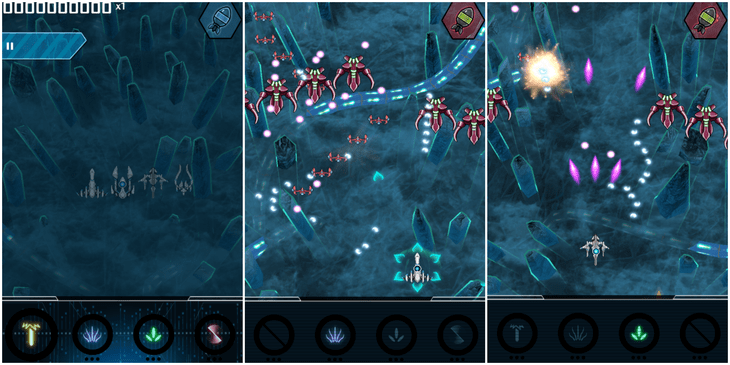 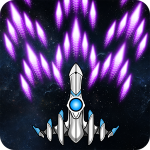 Squadron is a new little bullet hell shooter that happens to be a perfect time killer, if you have time to kill. Made of bombs and bullets, this surprisingly smooth and polished game combines perfectly implemented one touch controls, great soundtrack and a few nifty gameplay ideas.

So, you are a spacecraft pilot and your aim is to kill as many incoming waves of aliens as you can before you die. And die you will because there are just too many of them, and they shoot, throw bombs and always come with huge bosses. There are three planets you can select as your battlefield, and the first one is unlocked by default while the other two get unlocked as you progress and beat the first planet’s levels. That is it – a no-nonsense premise. 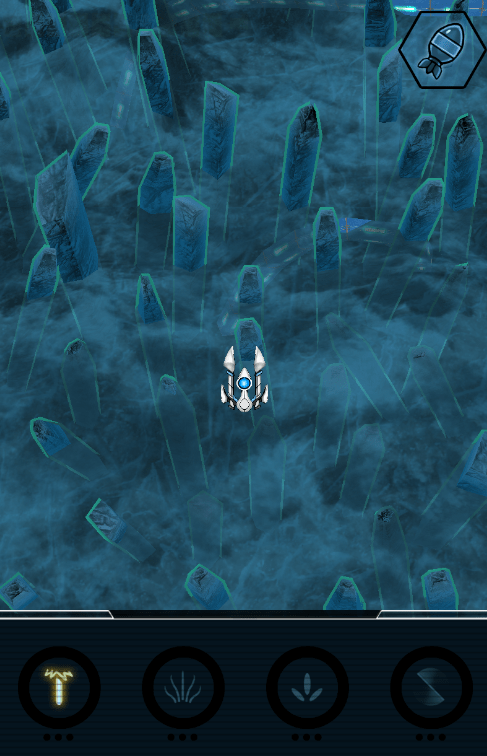 The first nifty feature that appeals to me is how the four lives you have are divided among the four spaceships. It adds a great deal of variety and lets players try different gameplay styles, switching back and forth between the ships as they please, as long as all the ships are alive.

The four ships look different and have different weapons. One is a laser beam; the other shoots purple bullets ahead of itself that cover some 45 degrees of the area. The third is a beautiful ship shooting in all directions and when it deploys its rockets, they look like flower petals outgoing from the ship. Notably, they are aiming the targets automatically, unlike the other three weapons, and when they leave the ship, they re-group in a funky neon dance and dash after the target they choose. The fourth, my favorite, is a predator ship, not because it bites, but because it looks ominous, and it shoots long neon sticks that rotate as they fly and eliminate both the far-away target and all the enemy bombs and bullets it meets on its way.

As you eliminate enemies, some of them will blast, leaving power-ups behind, and you need to collect them. These come as stars and upgrades. Thus, upgrades are implemented as soon as you catch the power-ups, and you don’t need to wait for the next level to apply them manually in the settings, as they do it in many other games of this genre.

Your weapons become stronger and you can kill more enemies, but they, too, come in dense waves topped by fat bosses.

Now, I haven’t completely figured out how the enemy bullets work because sometimes they would hit the ship and it would not explode while on other occasions it would blast in a colorful palette of realistic explosion. Then, the next ship in line takes its place automatically, unless you want to pause and choose a different one from the list of the remaining ships. 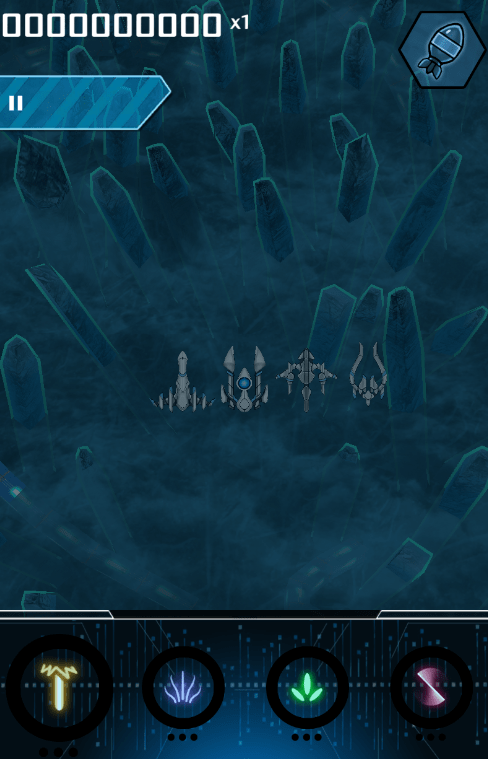 One of the greatest delights that make this game so smooth is the one-touch controls done right. You tap and hold anywhere on the screen to set the game in the “active” mode. In active mode, the ships fire automatically and you move them across the screen to dodge bullets and collect power-ups. As you remove your finger, the game pauses automatically entering the “passive” mode. Now, you can switch between available ships as you please, and you can do so as often as you like. Some incoming waves are better handled with long-range direct laser, others with omni-directional flower petal rockets.

Note, though, that the game won’t last too long when on pause and the enemy ships keep moving, although in a slo-mo manner, and sooner or later it will be “game over” if you don’t start shooting. 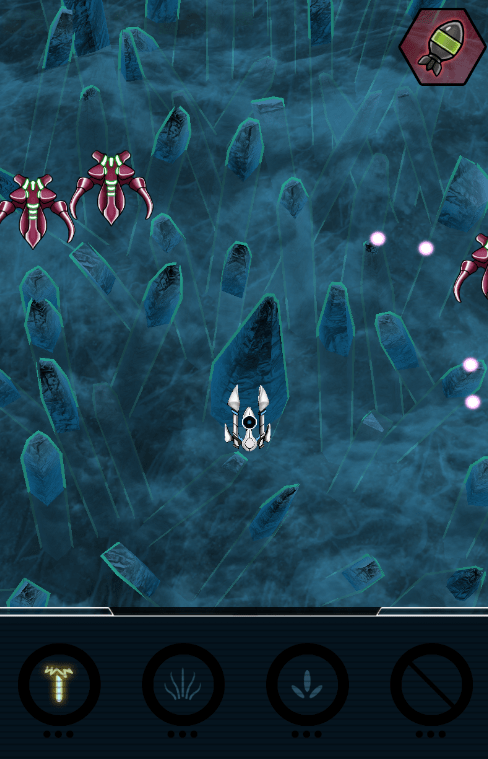 There are thirty levels in Squadron, and four difficulty modes – Easy, Medium, Hard and Extreme. Depending on the amount of free time you have on your hands and dedication, you might cover the Easy in a day of moderate gameplay, but the final boss is utterly hard. The further you get into the more difficult levels, the slower is the progress, but that in no way affects the fun of it.

The novelty and fun will wear off sooner or later, but I have been playing with a mild diligence for over a week now, and see Squadron becoming a resident time killer that can be played offline for quite a while. At the same time, I don’t see fun in replaying the levels I have cleared for better results.

What I do not quite enjoy is how hard it is to unlock the other planets – by clearing the first one. Thus, you end up playing with the same environments, which brings us to the next criterion – the design. 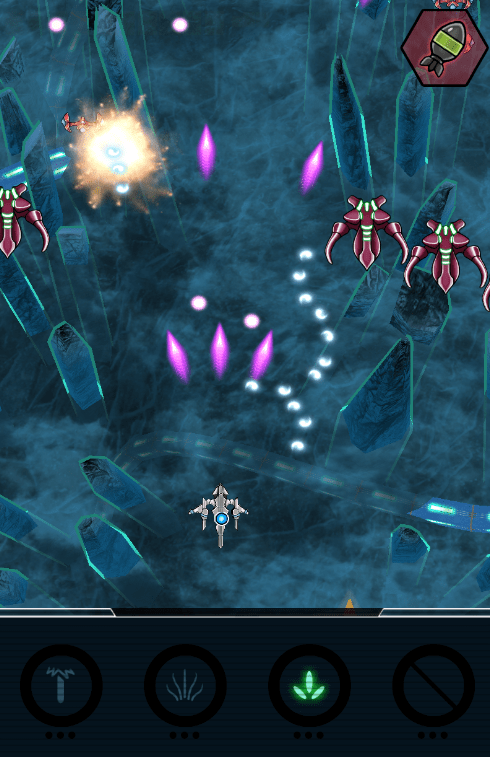 Even though Squadron feels totally old school in a good way, its design is beautiful and polished without being heavy on your device’s resources. The ships are small and surprisingly detailed, each of different shapes, design and weapons. The backgrounds differ from planet to planet, and in that sense you are likely to be playing with the blue planet for quite a while. It is beautiful and moderately varied, but ultimately monotonous. Although, it does not affect the gameplay much.

Another nifty touch to Squadron is the dynamic soundtrack that is both sci-fi and stimulating.

Squadron Bullet Hell Shooter is a free game featuring no IAPs, but is ad-supported. Occasionally, you will see small banner ads at the top of the screen when you are in between the levels and browsing the menu, but I haven’t noticed any ads during the gameplay. Overall, the ads here are totally non-intrusive. 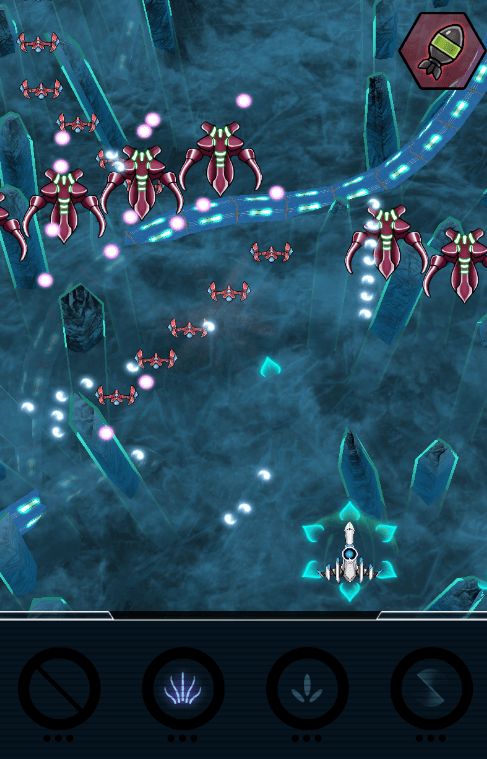 Squadron Bullet Hell Shooter is a refreshing take on the old school vertical space shooters. The game features a simple and smooth one-touch control system, awesome design, a variety of immediately available spaceships with different weapon types and a cool soundtrack. It is better played on large-screen smartphones or tablets, but considering the game is free, that single nag seems not so relevant. Finally, Squadron provides room for strategy, letting you figure out enemy assault patterns and switching to corresponding spaceships in your hangar. Great job!