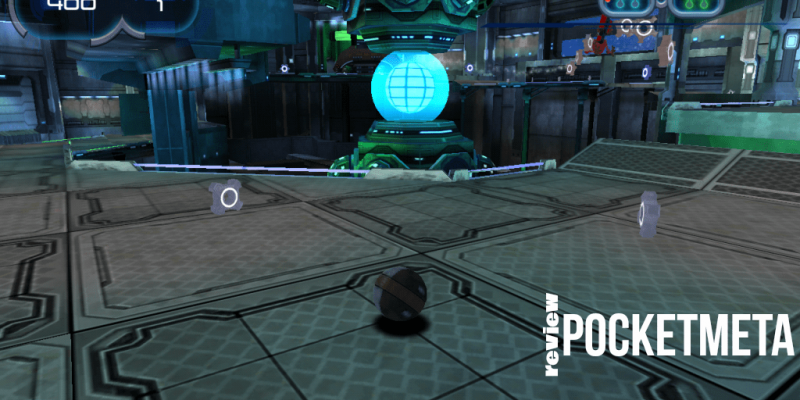 [Update] It seems Star Balls is a new version of last year’s Astro Golf by the same developer, but the latter seems to be off the play stores. It’s also available on Steam as Star Balls.

You have a robot that wants to escape a space station, and so it transforms into a ball to avoid the angry killer droids and overcome the hellish traps of the sci-fi maze.

The gameplay consists of launching a sci-fi ball loaded with a bunch of power-ups through the corridors and rooms of a space station. The goal is to get through the traps and obstacles, collect some gear points and get to the blue hole, aka the end of the level. The main challenge is to get to the destination in as few strokes as possible, and it’s aggravatingly hard at times.

Each level has a different layout, a different room, and varying traps and perks. Sometimes you just need to figure out how to launch the ball to get across the bridge. Other times, you need to jump from platform to platform trying not to fall to your doom. The gear points you collect are not that essential of a perk, if getting through levels is your goal. Even though they earn you the points you need to buy the boosters, they are not defining whether you beat a level, or not. The number of strokes does. So, you can collect two or three gear points, but finish a level in 1-2 launches, and you beat that level. Whereas, you can collect all the gear items, but count a dozen launches, and you fail. 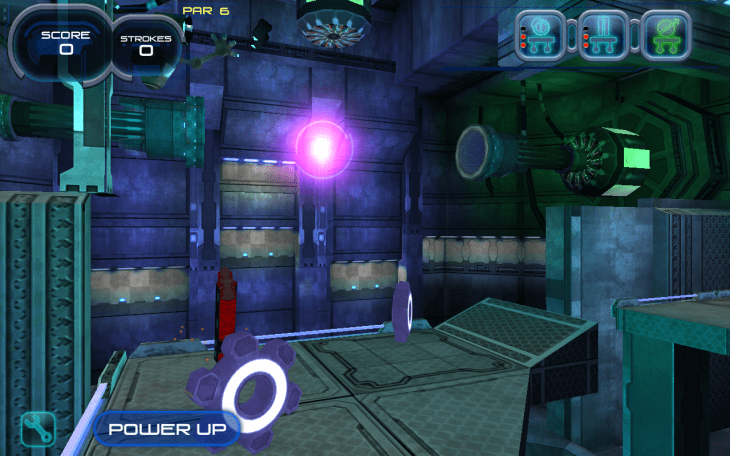 Yet, the boosters soon become a game changer. Some levels will have laser walls; some will have the sharp turns and short platforms. Others will place a coveted perk where you can not normally get by simply jumping. Hence, you need to beef up your ball.

There is a great deal of power ups that, thankfully, are not consumables. They come in the form of the upgradable modules. Each module can be upgraded several times until it reaches its max capacity. Once you have a booster, you can use it non-stop – it does not have any energy, recharge or number of uses cap. It’s worth mentioning there are three robots you can play with, but at the beginning you have only one and unlock the other two as you progress. Each new robot has more slots for the booster modules.

The boosters make quite a significant difference in maneuvering, and hence, add a few control tweaks. 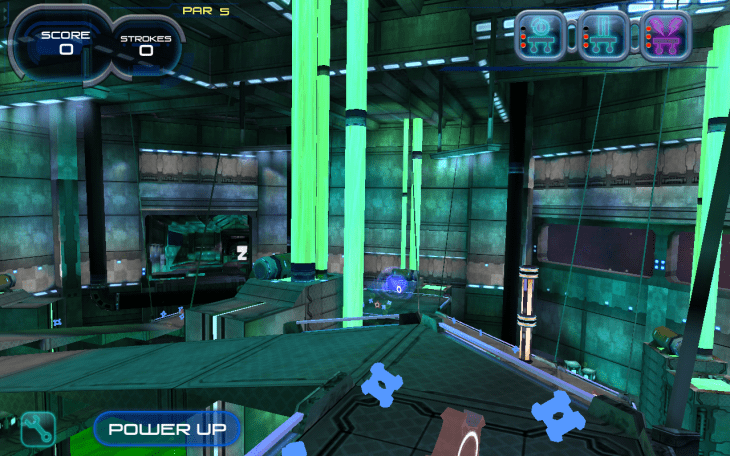 The basic, no-boost, control scheme is quite Angry Bird-ish. Rotate the environment around the ball – the ball is always central, and you view the scene from the third-person’s perspective, assuming the person is the robot ball. You launch the ball in the slingshot manner, by tapping and holding it, and as you aim you see the red arrow indicate the approximate direction and the force of the hit. Release to launch – that’s simple.

One booster adds the ability to swipe left and right to change direction while the ball is still in motion. Another booster works as brakes; one more works as a magnet for the destination point. There is a bunch of others that work with specific traps, like lasers or toxic ooze. Some multiply your points; others let you go back in time. There is one dubbed turbo that lets the ball jump and roll faster and higher. That said, the power-ups that need to be activated at specific points need action on the player’s part, like performing a swipe or tapping the booster icon. Other boosters work permanently in auto mode. 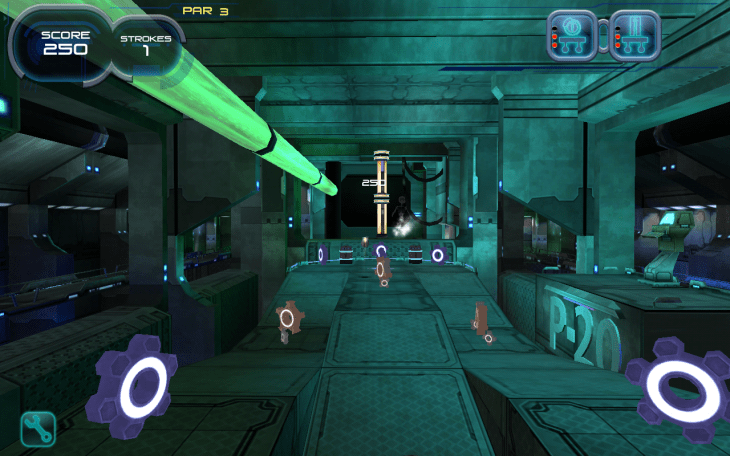 Even though the boosters are not imperative to beat the game, they make it possible to score 2-3 ticks in each level. Without them, the game becomes hard pretty soon. However, the game is generously giving you the coins you need to purchase the boosters. Speaking about the perks, there is the red key gizmo in some levels. It is normally placed so that you wreck your brain trying to figure out a way to get it. But if you do, you unlock a bonus level.

There are overall 50 levels, and the game becomes challenging quite fast, so chances are you’ll be playing it for a while, unless you are very-very good at geometry-based spatial challenges. The replay value is great mainly because there is no one way that you can beat each level. You can try different approaches; you can earn the points to unlock boosters and get back to the tricky levels to beat them with a specific booster. 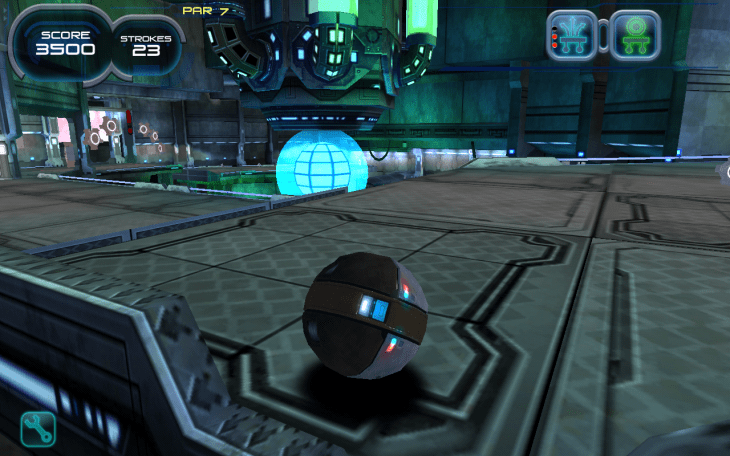 Visually, Star Balls is fantastic. The 3D environment of a space station is detailed, polished and all-around impressive. The textures are rich, the colors are sci-fi toxic but eye-pleasing, and the level of depth in rendering the space is excellent for a geometry-based puzzler. In fact, the design made all the difference for a nerd like me because I usually pass by golf and pool games, but sci-fi is my weakness – you can wrap any genre in a sci-fi cover and I’ll buy it. Star Balls is exactly the case. Besides, it’s a great physics-based puzzler in itself. 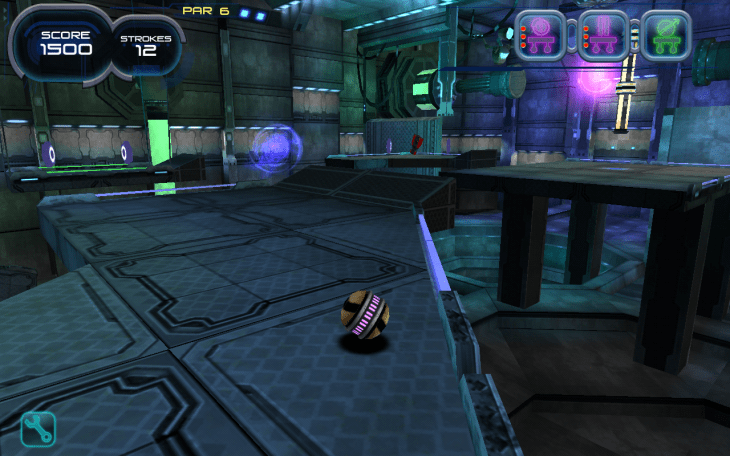 Star Balls is a premium title worth $1.99, but it comes with IAPs if you don’t feel like grinding for the coins to unlock the boosters and upgrade them. In my humble opinion, the game needs a demo version to get more users hooked on the gameplay before they choose to buy the full version. 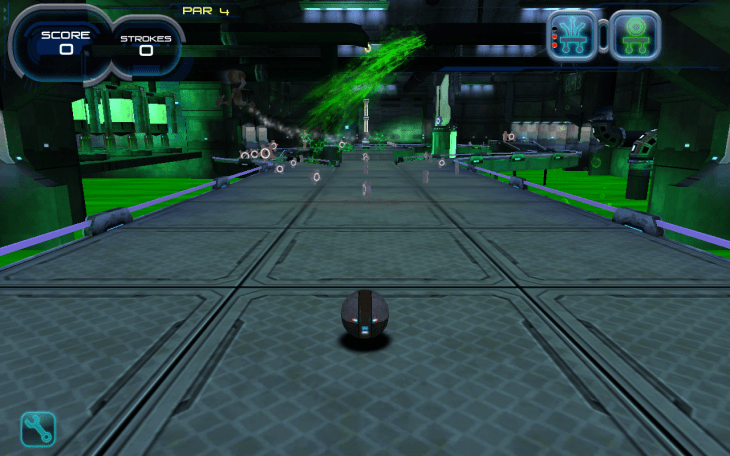 Star Balls is a clever mix of pool, pinball, golf and Angry Birds. It sends you to a space station to launch the robot balls and hit the target in as few strokes as possible. Power-ups make a lot of difference, especially when the traps and tricks get fiendish. It looks dazzling, polished and expensive, has a great replay value and scratches that climb the leaderboard itch of the competitive folks. All things considered, it’s worth the money. A demo version would be nice, to let the players test the performance on their devices. After all, Android is way too fragmented.