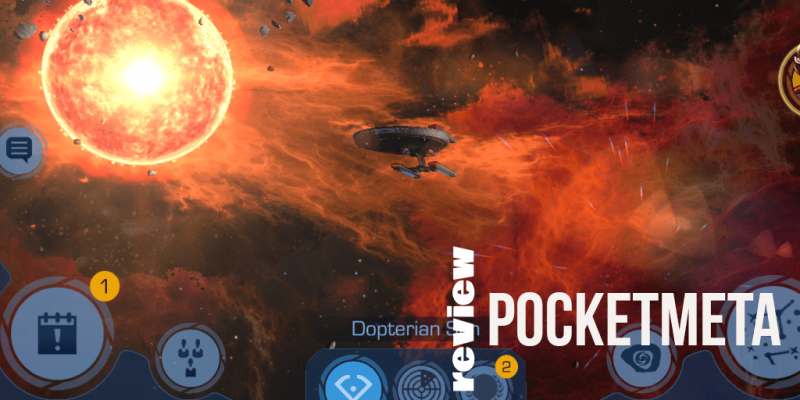 Movie tie-ins are controversial and difficult-to-make. Too many expectations and fans wanting all things a franchise has to offer; a whole bunch of characters and stories the fandom wants to reminisce about while playing. Disruptor Beam is not new to the movie tie-ins. Game of Thrones Ascent is one of their games you might have played, or at least tried. It was bugged, but fairly deep, and hooked the GoT fans right. The developer is diligent in ironing out the rough edges, but that game is still best played in the desktop browser.

They started working on Star Trek Timelines in 2014, and launched it in mid-January. It’s fun and addicting, and perhaps one of the best Star Trek games on mobile. However, there is an inherent controversy in this game – when it does one awesome thing, it also adds a sucker punch to counter that good. 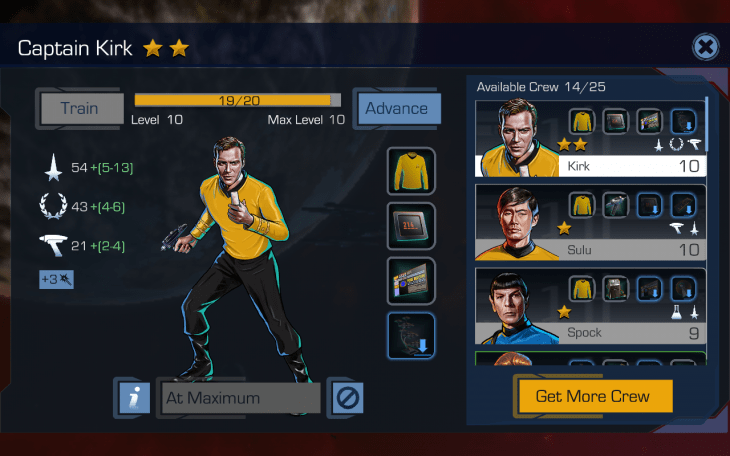 Since the fans want to see their favorite characters, Disruptor Beam made a bold move introducing an inexplicable time and space paradox into the story. The paradox brought all the times and all the characters of the franchise together, the rest is not important. What matters is you can unite Spock and Picard, Troy and Mayweather, Seven and Sulu in your crew. Great.

You get them heroes by unlocking the random loot that comes from the portal. It does scratch that collector’s itch to collect them all, or all of your favorites at least, but wait till you feel the sting of the freemium. 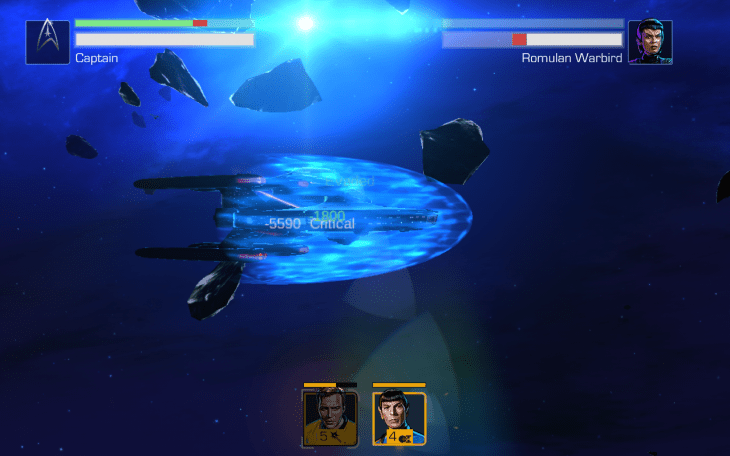 If you played GoT Ascent, you will find the structure a wee bit familiar. You collect heroes, upgrade them, send them to story missions, gain XP, upgrade more, battle more missions. Thus, you progress in the story via the different chapters you can take simultaneously, or one by one. No decision you make will alter the course of the main story, it seems. Your decisions mainly define how much loot you collect. There is only one decision that seems to depend on the player – determine which faction wins at the end of a chapter. It is not clear how that affects the story, either.

The gameplay feels a bit tedious, though. There is too much static element to it to forget it’s a CCG. A typical mission has you selecting three crew members based on their skills. Here come the hiccups. There are so many heroes, and even more stats and skills, you will need to get used to how unintuitive the selection process is. Each mission has a list of recommended skills. If it were in alphabetical order, at least, it would have been easier to sort out and try to weed out the characters that possess some of them. But no. Neither the recommended skill in the missions, nor the skills of the characters themselves are ordered in alphabetical order, while the logic of the game’s order escapes me. Hence, you may make blunders choosing unfit characters. Replaying the mission costs you energy. And then repeat the process with a different crew. Here is how a mission goes. 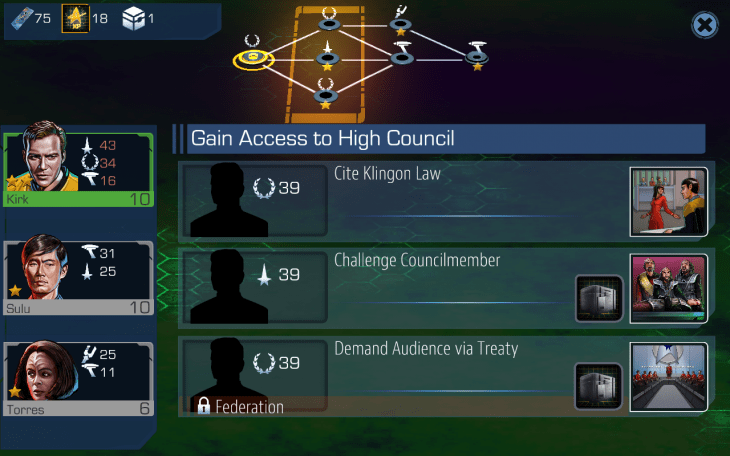 You read through the mission intel, then the game presents you with a challenge and 1-3 multiple choice answers. You choose a character with a needed skill and assign him/her to the challenge. Based on the stats of that character, the game displays whether the challenge is easy, medium or hard for them. The ultimate outcome depends on that rating as well as on how (un-)fortunately “random chance operates.” The latter determines if you unlock some epic loot, or not. This randomness factor adds an unwelcome frustration.

You need to read through the mission briefs and dialogues in order to select the answers, otherwise the game is not fun at all. The story drives the gameplay alongside the stellar visuals. But here is the catch – unless you have seen all the episodes and know who is who in Star Trek universe, you are inviting trouble. You will get used and abused unless you know who tends to lie and ambush, and which faction is better to side with – Maquis, Bajorans, Klingons, Romulans, etc., etc. Or else, it could be the case that the game is abundant in plot twists that will make you feel like a naive loser quite often. 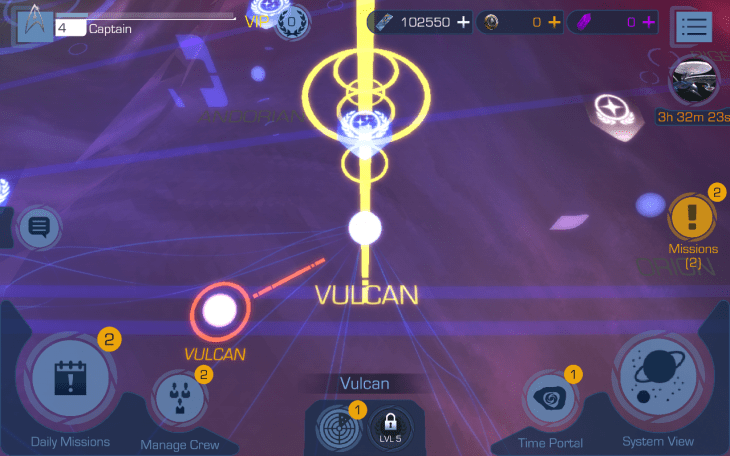 Once in a while, your crew will engage in a spaceship combat versus some space predator, and you would think that’s where the action is. Nope, you get to tap when the ship’s or crew’s abilities come out of the cool down timer and watch the ships “battle” in cinematic mode. Minimum input from the player is required.

Star Trek Timelines does look good. The spaceship battles and the psychedelic star map are worth a download alone. The variety of the ships makes me think a lot of love has been invested in this game. The characters are merely cartoon style static pictures, but the occasional voice-over adds the livelihood. I like how the waiting between the missions is a warp that looks fantastic, and how the planets are different and impressive. However, the game does little explaining itself – the UI is not intuitive, and it’s further amplified by the performance bugs that haunt the game even on the high-end iOS devices. Unresponsive buttons make only half the issue. Another issue is how poorly the things like factions, faction missions, ship management, upgrade and switch work. Why, I spent two days with the game before I discovered where the Settings were. Not fun. 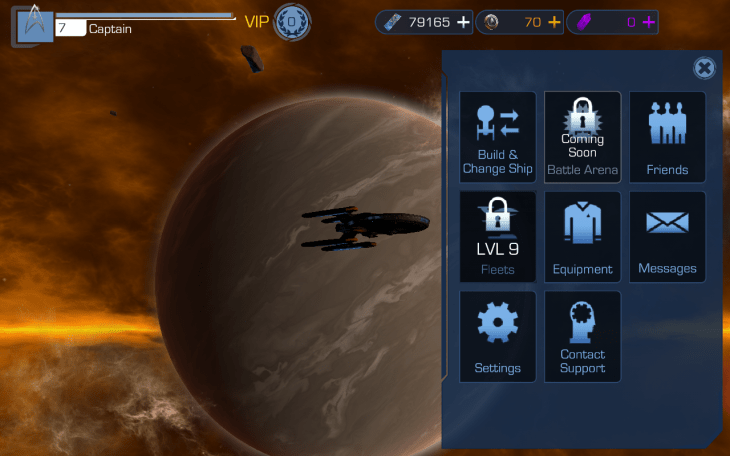 Simply put, non-intuitive. How do you access the ship management panel? Why are there the fleets and what do they do? Why is it not immediately clear you need to tap a captain’s icon in the top left corner to customize it? What’s the catch with the scans? The faction missions and their transmissions feel like too much hassle with too many unnecessary taps and travel. The character level up and upgrade system in itself is enigma, again with too many extra taps – why can’t you assign several training points at once? There are so many thingies your characters need to equip to level up it makes no sense keeping track of any. A cup of Earl Grey be my conciliation! 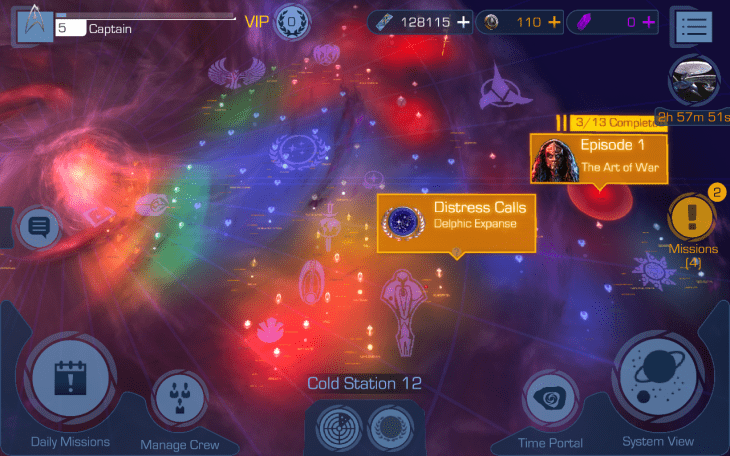 The game is jam-packed with the different currencies, and its system is tightly slated towards making the player spend the real money. And if you pay, you should be ready to cash out significant sums, like $50-$100.

The video ad in exchange for a premium roll in the portal never works. I figured there’d be a free spin in the regular portal, but it works only at fixed time of day. There seems to be a bug that does not add my main currency as I play. The energy runs dry if you replay several missions, and all important things cost crystals, of which I have zero since the beginning of the game. There does not seem to be a way to earn them by playing.

That said, there are two factors at play here – a) the game is buggy, b) there are too many IAPs and currencies that are expensive. The conclusion – heavy pay walls. 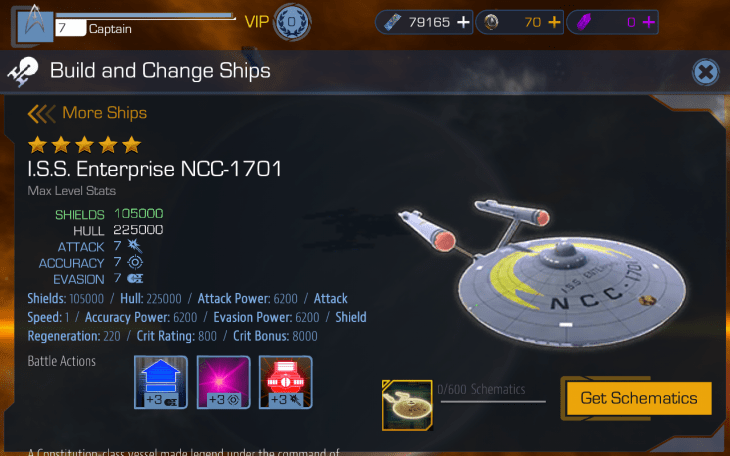 Star Trek Timelines is a fun and addicting game. Assemble your favorite characters and take them on [mostly reading] missions, but the visuals are great, and the skills abundance makes it a highly replayable CCG. However, the bugs, the paywalls and the over-abundance of junk equipment chip away from the fun factor. The UI and controls are counter-intuitive; the fleet is there for a mysterious reason; any ship other than the default is crazy expensive. When/if Disruptor Beam makes it into a polished [performance-wise] premium no-IAPs game, it’d be worthy. Right now, it’s a work in progress.