Does blowing up aliens via an arsenal of heavy weaponry that includes rocket launchers, shotguns, and assault rifles, sound like a good time to you? If so, you might be interested in this new iOS game, Star Warfare 2: Payback. As suggested by the title, this is a sequel, and unfortunately I haven’t played the original — but that shouldn’t make a difference for the review! This is a third person shooter where you’re able to customize your character’s loadout, as well as upgrade and unlock weapons and armor.

Visuals are a high point for Star Warfare 2, not necessarily in the menus, but once you actually get into the game. The maps are pretty well designed, and there are a few different types of scenery that each bring a different feel to your gameplay. One thing I really wanted to highlight, was the enemy models and how nicely they look when exploding. It does seem like you encounter the exact same enemies quite frequently, but that’s really to be expected in an alien shooter.

The game itself runs well, I didn’t really notice any stutter with the frame rate, and there weren’t any apparent visual glitches either. Gunfire didn’t feel quite as good as the rest of the game, as your bullets just look like small dots that don’t really impact when they hit your enemies. Still, there are enough good things about Star Warfare 2’s graphics that are able to outweigh the negatives — but with a bit more work this game could be a visual masterpiece.

Reloading is for chumps

As for the Gameplay in SW2, I found it to to be pretty stale at times, but then exciting at other times. I’m not sure if this was a mechanic from the first game, but never having to reload was very interesting to me. When reloading is out of the question, it seemed like it didn’t really matter what type of weapon I used in most situations. The game would be very difficult if you had to stop and reload every few seconds, as there are mass amounts of enemies coming your way constantly, but I just felt this was an odd mechanic.

The aiming is very assisted, so you really just need to slowly aim and take out enemies one at a time while holding down the fire button. Sometimes if you get several enemies bunched up, switching to an RPG can make quicker work of them, but an Assault Rifle seems to work well in any given scenario. It would have been nice to at least get some grenades, or some sort of special power, but as a result the Gameplay seems very grindy.

With all that being said, there’s still some charm to this game’s combat system. Just because you can hold down the fire button all you want, doesn’t mean there’s no challenge to the game. If you are unable to kite enemies to mitigate damage, or prioritize which enemies to take out first, you’ll definitely struggle with the later levels of the game. SW2 doesn’t have too long of a campaign, but you’ll be able to re-play it on Heroic mode after completion, which provides much more of a challenge.

Stay for the PvP

If you enjoy the combat, the campaign will likely keep you entertained throughout, but there’s plenty of fun to be had in the game’s PvP mode as well. SW2 doesn’t just offer a simple deathmatch, but rather a variety of unique game modes such as CTF, co-op standoffs, and even gives players the opportunity to play as one of the alien bosses. I won’t say the multiplayer mode is perfect, and it definitely still needs some patching and polish.

Overall, the biggest setback in SW2 is the combat, which can be really boring depending on the situation. I don’t know if most players will stick with the game long enough for it to really get interesting, but just know that there is some really great fun to be had once you’ve got a powerful loadout — which you created to cater to your personal play style. 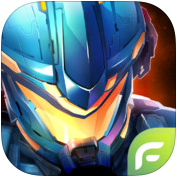 Star Warfare 2: Payback, is really an acquired taste. It’s not a game where you should expect to be immersed from Level 1, but if you can learn to appreciate it’s unique flavor, it will certainly grow on you. Although it can be a bit of a grind at times, it’s still fun to build your loadouts, blow up some aliens, and then take it to the PvP grounds for more action.