As we reported earlier this week, Disney pulled the plug on two or its Star Wars mobile games – Tiny Death Star and Star Wars Assault Team – without even warning the developers, or us the fans. I played both, and it was nice being able to rekindle the old passion. It seems, though, that Disney meant to attract more attention to its new Star Wars release – the Commander. About a week into the game, I think I’m ready to announce the verdict.

Star Wars Commander takes place somewhere in between the episodes IV and V, before the New Hope time, and truth be told, the first and foremost charm of this game to me is the campaign mode based on the story. Thankfully, unlike Star Wars Assault Team, you get more than Han Solo, and you will have close encounters with Darth Vader, Princess Leia, Chewbakka and some other not so famous characters.

The missions are interesting enough to want to play more of them. Another remarkable detail here is the voice-over – even though it is not performed by the original actors, the performance is quite superior. I was sure it was Harrison Ford until I realized he doesn’t sound like himself these days.

Clash of Clans Clone could be a sub-title for Commander, and unless you really hate the CoC gameplay, you will feel familiar with the main elements and how things work here. First, you get to choose your alliance – the Rebels and the ever young Princess Leia, or the Empire and Darth Vader. The Rebels side will let you hire iconic heroes like Han Solo and Chewbakka while the Empire side is technologically stronger and grants you AT-STs and imperial troopers.

Next, you get to build and fortify your base on Tattooine. You can’t choose a planet, so it’s Tatooine for better, or worse. While the UI may seem overwhelming at the first glance, sorting things out is easy because the game tutorial gives you proper introductions, and keeps reminding you when you need to level-up your buildings, or turrets.

You need to manage the headquarters and two main sources of income – alloy mines and credit market, which give you the ability to fortify your base and build up troops. Basically, the never-ending circle of leveling-up your base and building troops to earn more loot is spiced with fighting in the campaign mode and PVP. You can also join a group to stalk others and be protected better against those who stalk you.

The campaign mode takes you on a variety of missions, even to other planets, where you have to take down enemy bases. Before the mission, you will need to train your troops, which costs you credits. Further in the game, you will unlock Heroes, like Chewbakka and Han Solo – these have more power and wit than the regular troops. You can build only a limited amount of troops, depending on the number of places you have in your transporter. 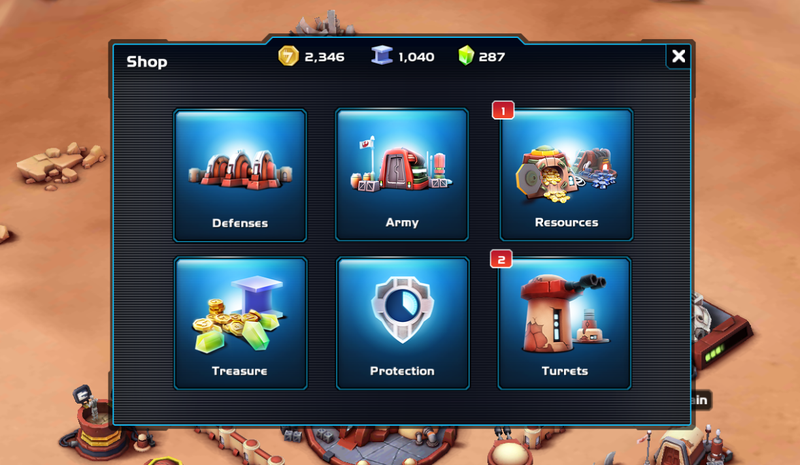 The fighting itself, however, is a sort of a disappointment. You have the breakdown of troops and weapons you can deploy, including the tanks and fighter jets. However, you can only mark a target for the jets while the rest of your troops will act upon the AI’s will. And here comes the major drawback, or two if to be correct.

The first is the troops controlled by AI are utterly dumb at times. You can’t place them directly inside the enemy base, so you have to place them outside the walls for them to pick their targets automatically. I found that dispersing your troops around the enemy base gives better results than placing them in the same spot – that way, the chances are some of them will pick a good target. Sometimes, they would run for the furthest turret instead of taking down the nearest one that is killing them. Anyway, the AI is either not very intellectual here, or it’s a mystery to me. I hope this gets better with the updates, though. 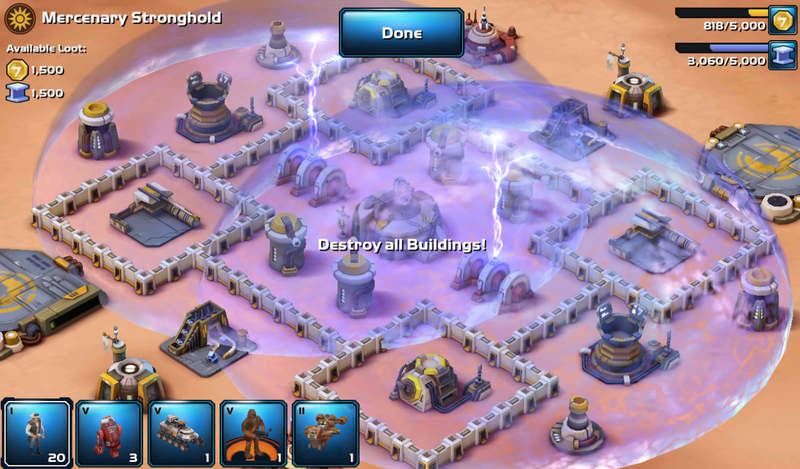 The second, and probably the largest complaint here is the troops’ lifespan. You lose all the troops you deploy in every attack even if they aren’t dead! As a result, you come back to the empty barracks and have to start training troops from scratch after every single mission. In its turn, this results in a very slow progress money-wise and upgrade-wise. Even though the missions bring generous rewards and plenty of loot with them, you will inevitably spend a lot of Credits on restoring troops and recruiting heroes.

More on the fighting – don’t be surprised if after you come back from a successful mission, or spend an evening upgrading your fortification, and the next time you check the game your base is a load of smoking ashes. Someone attacked you while you were resting or fighting, and you have to start over again. Though, your alliance with either of the two sides brings some perks, but such instances can be disheartening. 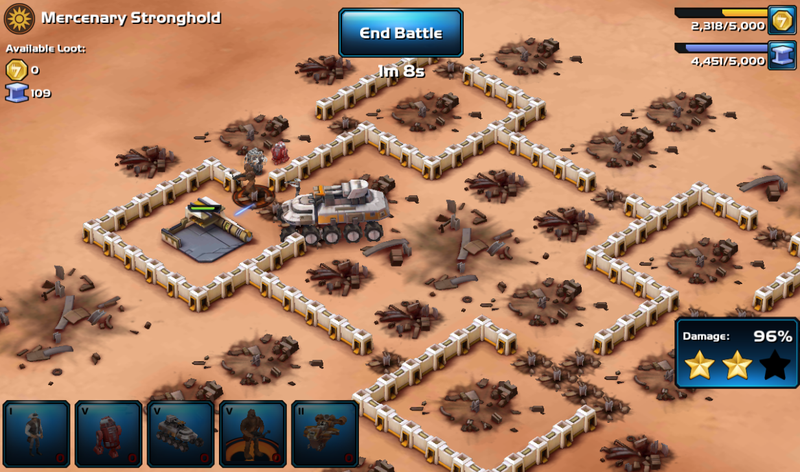 Despite the Commander game being a very close clone of the Clash of Clans, a genre I am not a very big fan of, the game is next to be a perfect Star Wars game for the fans. The visuals are spot on and the original soundtrack add up to the epic atmosphere of the gameplay. As I said, the voice-over is superb, so the first time you meet Han Solo, and he tells you to give him a target so that he takes it out for you, as a Star Wars fans, you are doomed to get hooked.

There are  three currencies in the Commander – Credits, Crystals and Alloy. Alloy is produced in your base mines and comes as a reward for successful missions; you need it to build and level-up your buildings, fortifications, and weapons. Credits, like Alloy, can be produced on your base markets and earned by completing missions. By the way, the missions’ success is also defined by stars, where three stars is the best result. You need Credits to train troops, recruit heroes like Han Solo and Chewbakka, and buy building units and fortifications. Crystals can sometimes be rewarded for leveling-up and completing missions, but in most cases, bought via in-app purchases, and the prices are somewhat steep if you compare the amount of crystals in a pack and what they can buy you.

The developers swear you can play by grinding and without ever having to purchase anything to finish the game. Even so, the more you level-up, the longer it takes for things to complete. As much as I appreciate the free-to-play model, nothing in a game should take a day to complete. So, inevitably, there will come a moment when you will have to put the game aside.

The PVP mode pairs you with the players of your level, so if you have been playing by grinding without buying to speed things up, the game won’t be placing you against someone who’s paying.

I still don’t get it why the Disney beast had to kill two great games to boost sales of the Commander. They could have co-existed perfectly in peace, but alas, Disney is a giant, and despite the great movies, cartoons and games it makes, the company managed to raise a persistent audience of haters, who have their valid argumentation.

As for the Star Wars Commander game, it is a fine entertainment for the fans of everything Star Wars, featuring a thorough gameplay, great visuals and voice-over, but failing to impress and become addicting mainly due to how slow things progress (if you are not paying). For now, I’d rate it as a great time killer, but if you want to really enjoy it once you are through with the initial levels, stock up some patience or get those dollars ready. And may the force be with you!